Angie Faulker certainly had a bit of vision when she came across an individual early 1970s home, on a delightful green belt riverside bungalow plot, in a pretty village between Bristol and Bath.

Despite its idyllic setting, the bungalow wasn’t exactly in demand — its mid-century design flourishes being somewhat lost on the 21st-century housebuying public. But in the clean lines, groovy feel and location, Angie could see the end result.

“I first met my architect Jon Foulds when I was running a smoothie bar in Bath,” begins Angie. “I got to know him over the years and when I took on this house, he was the first person I went to.” 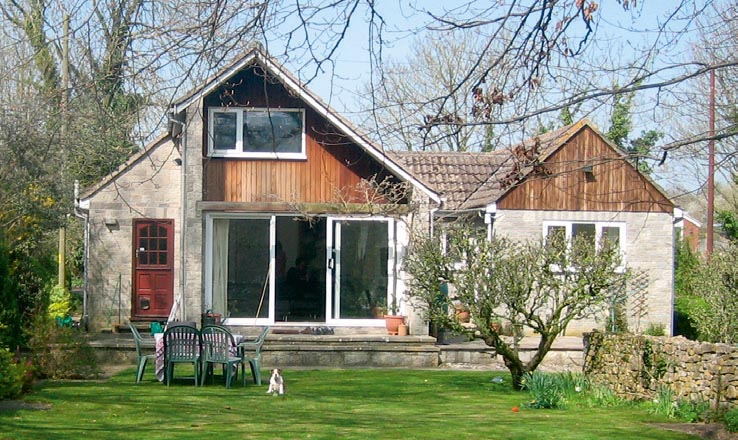 The original 1970s property before it was transformed

“Luckily,” says Jon, “we shared a similar vision for the house. We could both see the potential to create a modernist-inspired home, with only modest intervention. A few tweaks externally, and a lot of internal reworking, and we knew that this could be a great house.”

Seeing the potential beauty in this architectural ugly duckling, Jon (who, by this time, had set up his own practice, whiteBOX Architects) and Angie set about coming up with a scheme based on the restrictions of the 30 percent volume increase allowed under local planning policy and the relatively modest budget of £150,000.

The build was run off a JCT Homeowner Contract between the main contractor and Angie, with Jon supervising at regular intervals and detailing key design elements.

Fortunately, the fact that it was an existing home meant that there were no special requirements in terms of flood alleviation. Indeed, the first job was in fact to build a new self-contained ‘annexe’ right by the river which consists of a couple of rooms – it’s little more than a poolhouse/shed – which Angie lived in while the house was deconstructed and put back together.

The 1970s bungalow has been transformed into a contemporary home designed by whiteBOX Architects, with vertically laid stained larch, a new front door and new windows featuring. The left-hand element has been turned from a garage into usable internal space

“Minimal intervention was key,” explains Jon. “We have extended one half of the rear to create a flatter elevation, and built two new dormers (the chalet bungalow had a room in the roof but it was tiny and cramped) into the roof.

We’ve added new windows and door positions and removed and replaced plenty of the home’s original internal walls. It has been completely opened up inside and it’s now light, airy and really makes the most of the site.”

Outside, the front elevation has been reclad in vertically laid stained larch. To the rear, horizontal oak boarding provides an interesting and easily maintainable contrast to the large expanses of glazing.

Stone detailing around the windows is as original, with some additional stonework added on the new gable — it looks entirely as if it has always been there. Rather than reclad the whole roof, additional concrete (round-topped) tiles were sourced from a local reclamation yard to blend back in with the ones already on the house. “It would have been nice to have slate,” explains Jon, “but budget was important.”

The previously pokey interior has been opened up significantly with the removal of the hallway, separating walls and more. A sturdy steel post provides support and a useful element of zoning for the open plan ground floor. The kitchen units are from Howdens, while the worksurface is architect Jon’s own design built in walnut

Inside, the significant remodel is obvious: the extended entrance hall gives generous circulation space, which then opens up to a large, airy open plan kitchen, dining and living space, all enjoying views over the river. It’s very white, very clean and very simple, with just a single orange pillar as an indication of the original layout. There are a couple of guest bedrooms and a bathroom too.

Up a new solid oak staircase – purposefully narrow to ensure room to move around it in the internal hallway – the master bedroom feels light despite its low ceiling heights (one of the dormers above the staircase ensures two metre head height clearance for Building Regulations compliance). There’s a clever and surprisingly generous shower in the en suite (built right into the roof space). Three rooflights in the flat roof valley (between the two gables) give plenty of light to the open plan living area too.

Inside is very much a collaboration, with Angie specifying the kitchen and most of the finishes. Extra little touches make the home special, such as the chamfered window reveals and a beautiful picture window, which frames the views of the hills to the east.