Linda Wilson and Peter Quicke have converted a run-down barn in a spectacular setting into a characterful, tranquil home.

“It’s a resting place for my soul,” says Linda Wilson of her new Highland bolthole, which until fairly recently was a semi-derelict barn, housing bits of farm machinery and sheltering working horses.

However, following a spectacular transformation, in collaboration with Skye-based architects Rural Design, Linda’s “home for the future” is now “a nice, cosy retreat, which is actually quite palatial,” featuring a double-height living area at its heart with a master bedroom and further live/sleep accommodation on a mezzanine level.

Having acquired the plot (which includes two thirds of an acre as well as the barn) following a year of “gentle browsing” on Plotfinder, Linda admits that: “Initially, I didn’t know what we were going to do with it.” However, Linda eventually approached Alan Dickson of Rural Design to discuss taking the project forward — before outline planning permission, to convert the property, ran out. 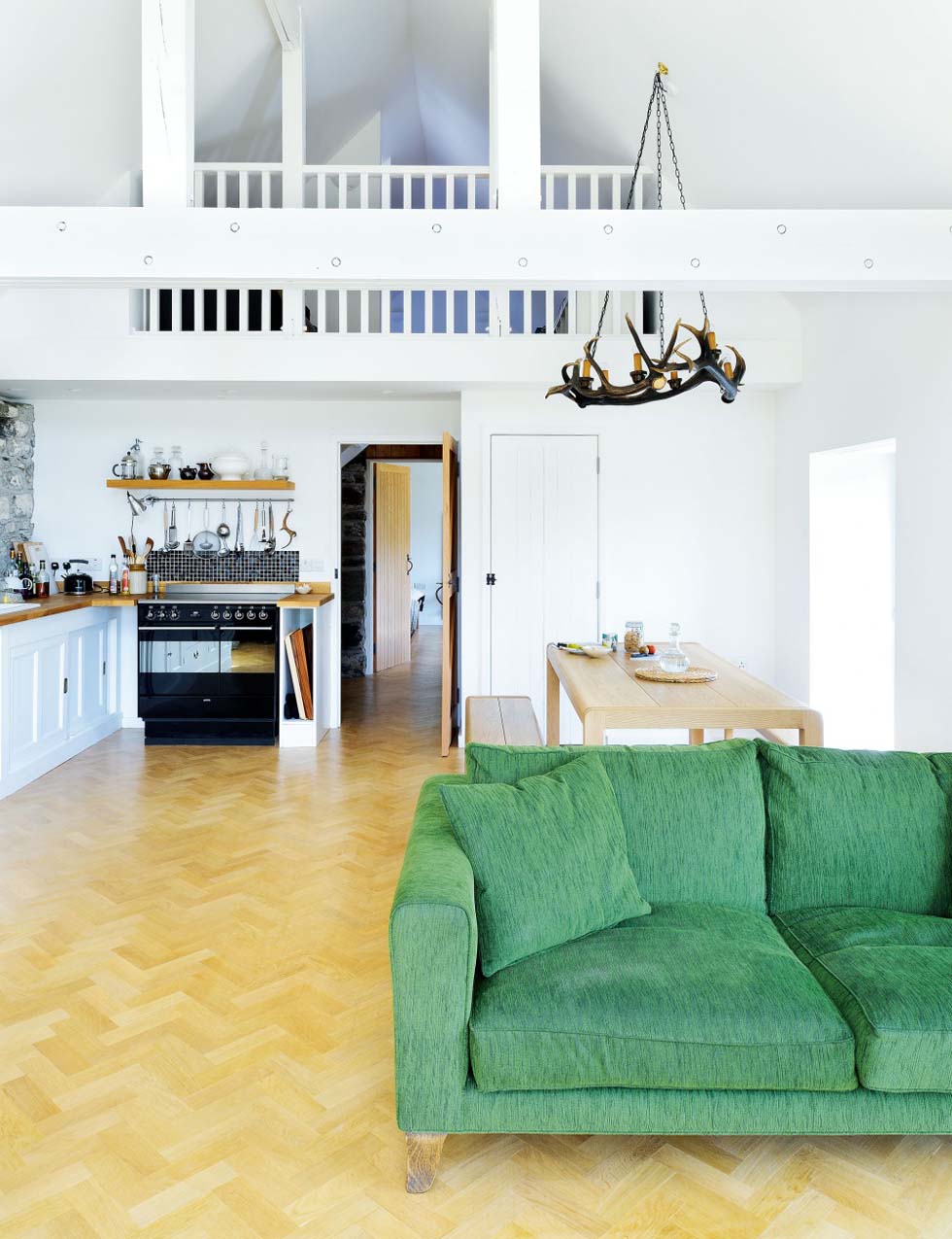 “I haven’t done a project like this before but I am a set decorator for film and TV so I’m used to walking into a room and working out how to make it better. I also know how to do it within budget and I’m used to looking at plans. Instinctively I enjoy the design collaboration. And in this case, we had a lovely dance between ideas and what the planners would allow, with our architects.”

Eventually the design that prevailed was to preserve the integrity of the building by retaining the stone walls and openings and reinstating the slate roof. One of the main challenges of the build was incorporating the new picture window in the gable end. “This meant that the wall had to be rebuilt as the opening wasn’t in there originally,” explains Linda. “The architects also came up with the idea of the entrance and larch-clad extension area with utilities to the back to house, which works perfectly. 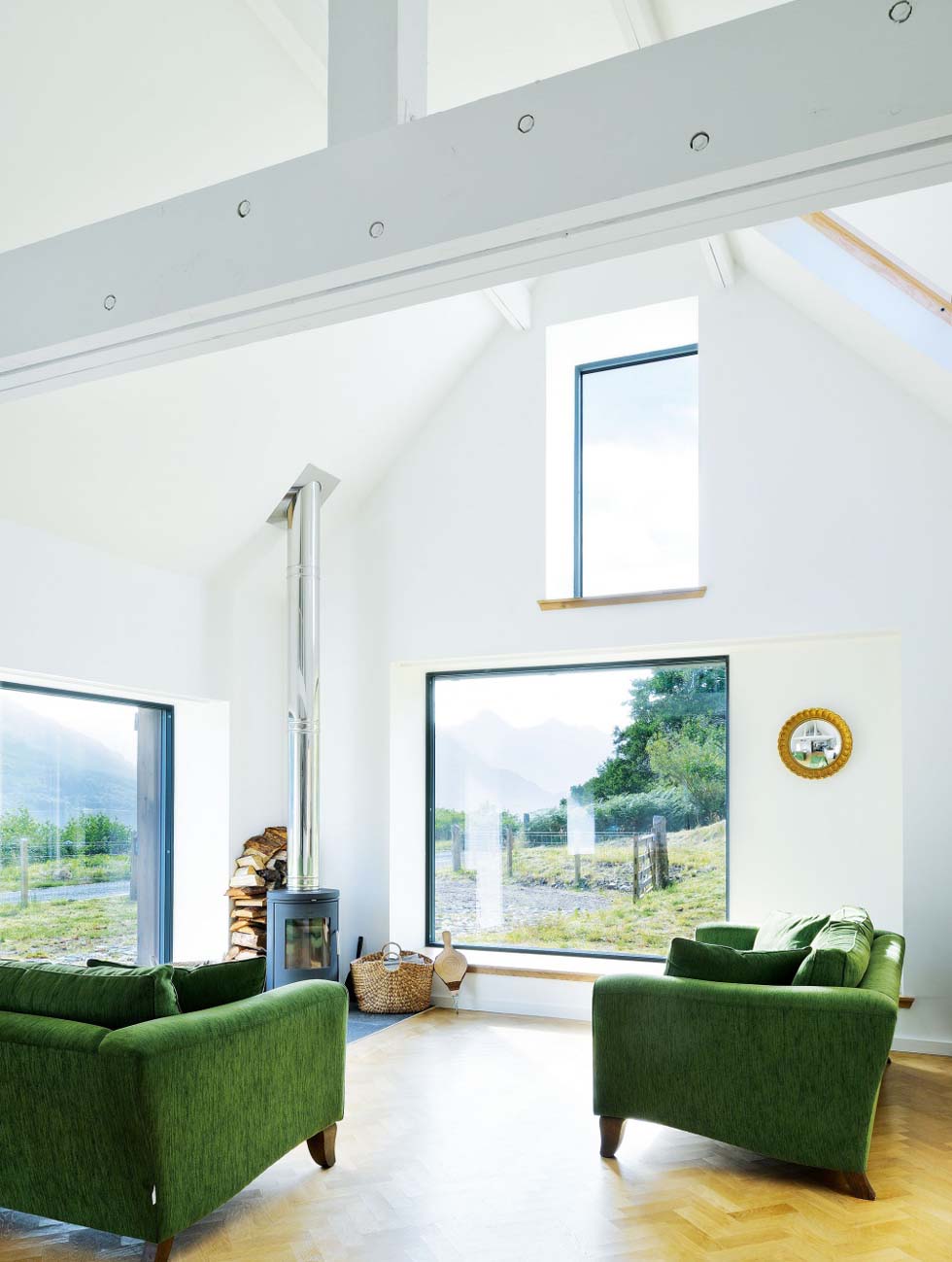 “In terms of the interiors it was like a dream doing what I do for a job, except doing it for myself,” admits Linda. “I was keen to have a double-height ceiling in the main living area, rather than trying to squeeze in bedrooms upstairs.” And this is duly what emerged following the six month construction period. The open plan area features locally sourced Douglas fir structural beams and a huge gable window allowing spectacular views over the sea to Skye. A woodburning stove provides another main focus, as well as most of the house’s heat (there’s a couple of electric panel heaters too and the water heating is also direct electric). 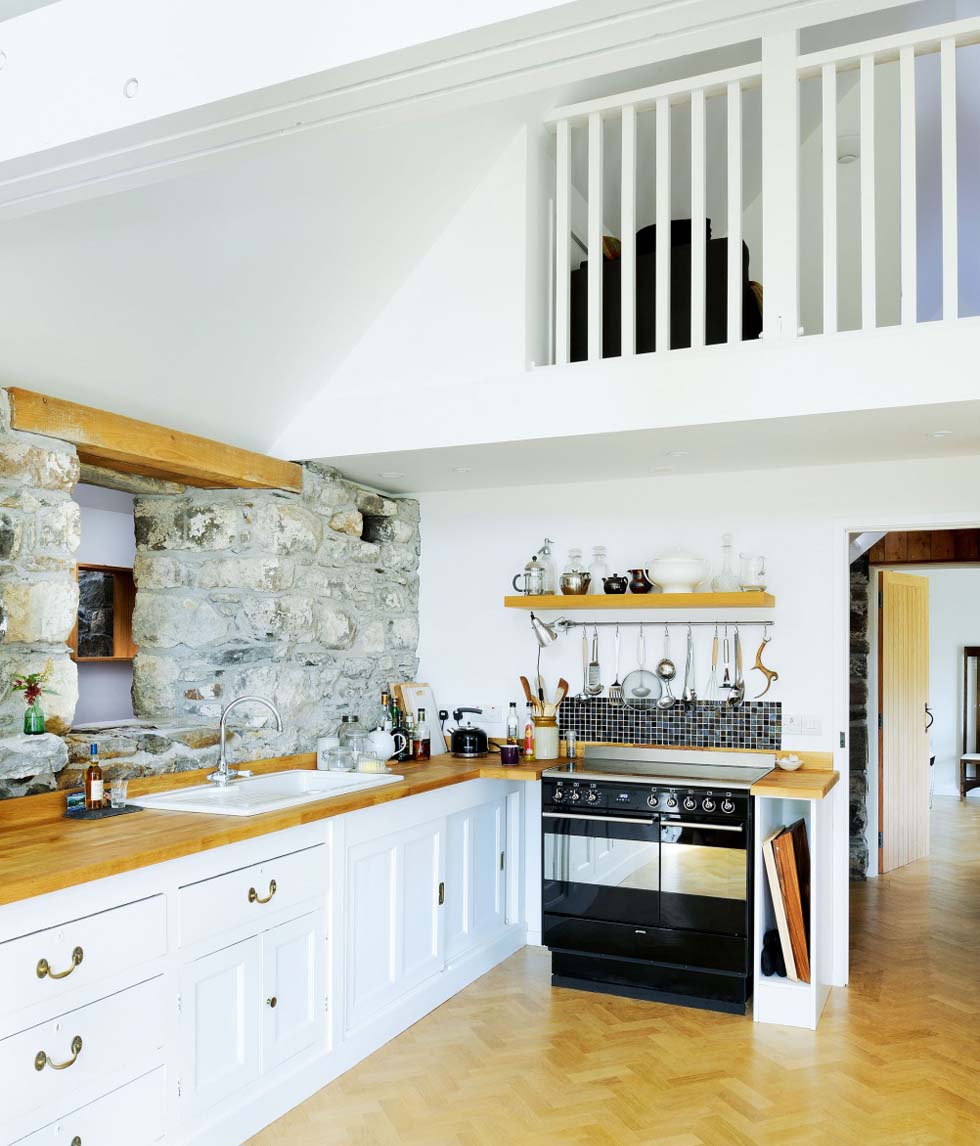 The kitchen has been built around units that came from Peter’s family home in Devon, as have many of the antique pieces, which have been cleverly combined with contemporary fixtures and furniture such as the bespoke sofa and dining table and benches. 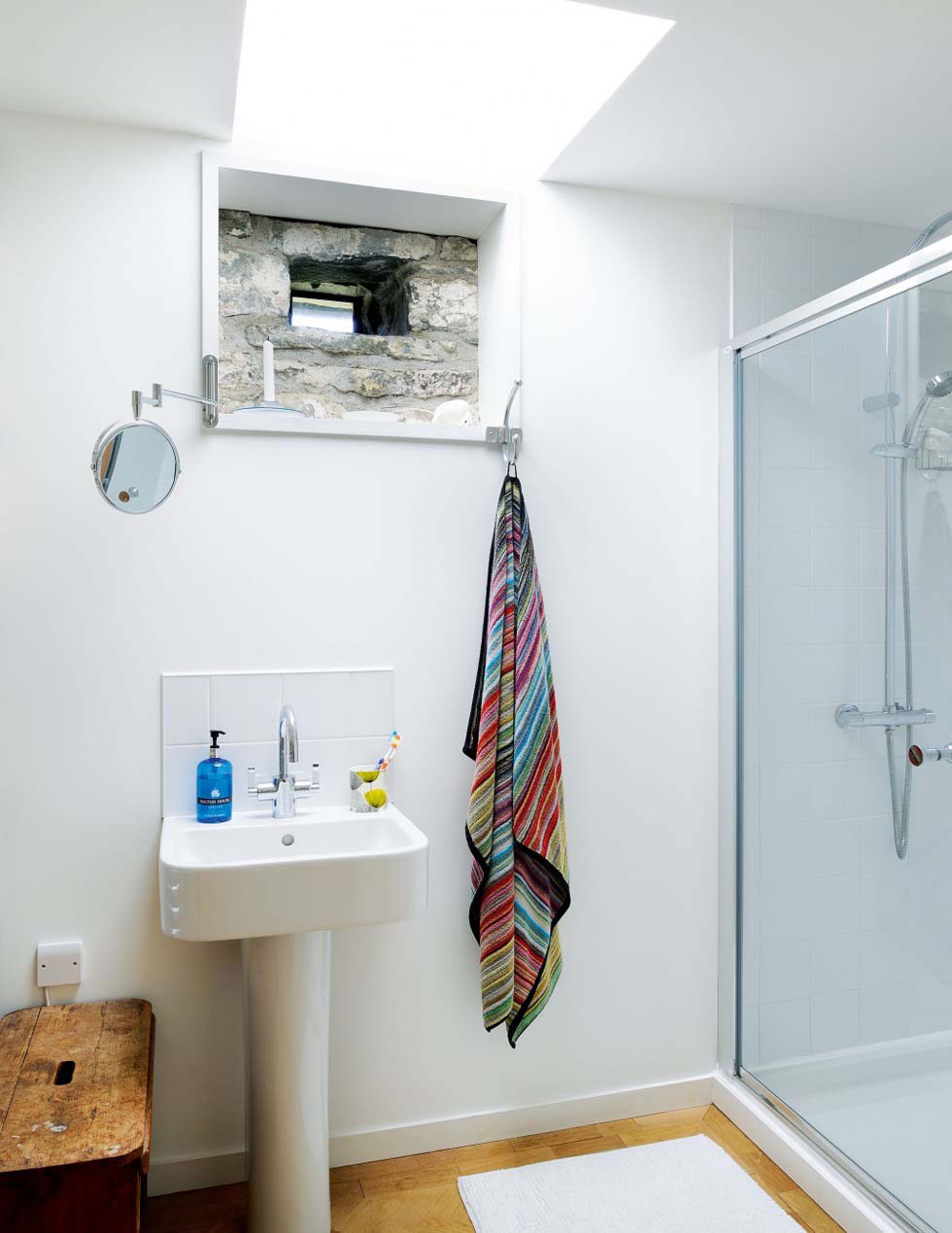 The one area that Linda took responsibility for, outside the main contract, was the parquet flooring. “I knew I wanted my dream floor. I had bought reclaimed oak parquet from the Natural History Museum and it got delivered mistakenly to another house and laid there. So I was given this reclaimed oak which was much paler but which I’ve ended up loving,” she says. 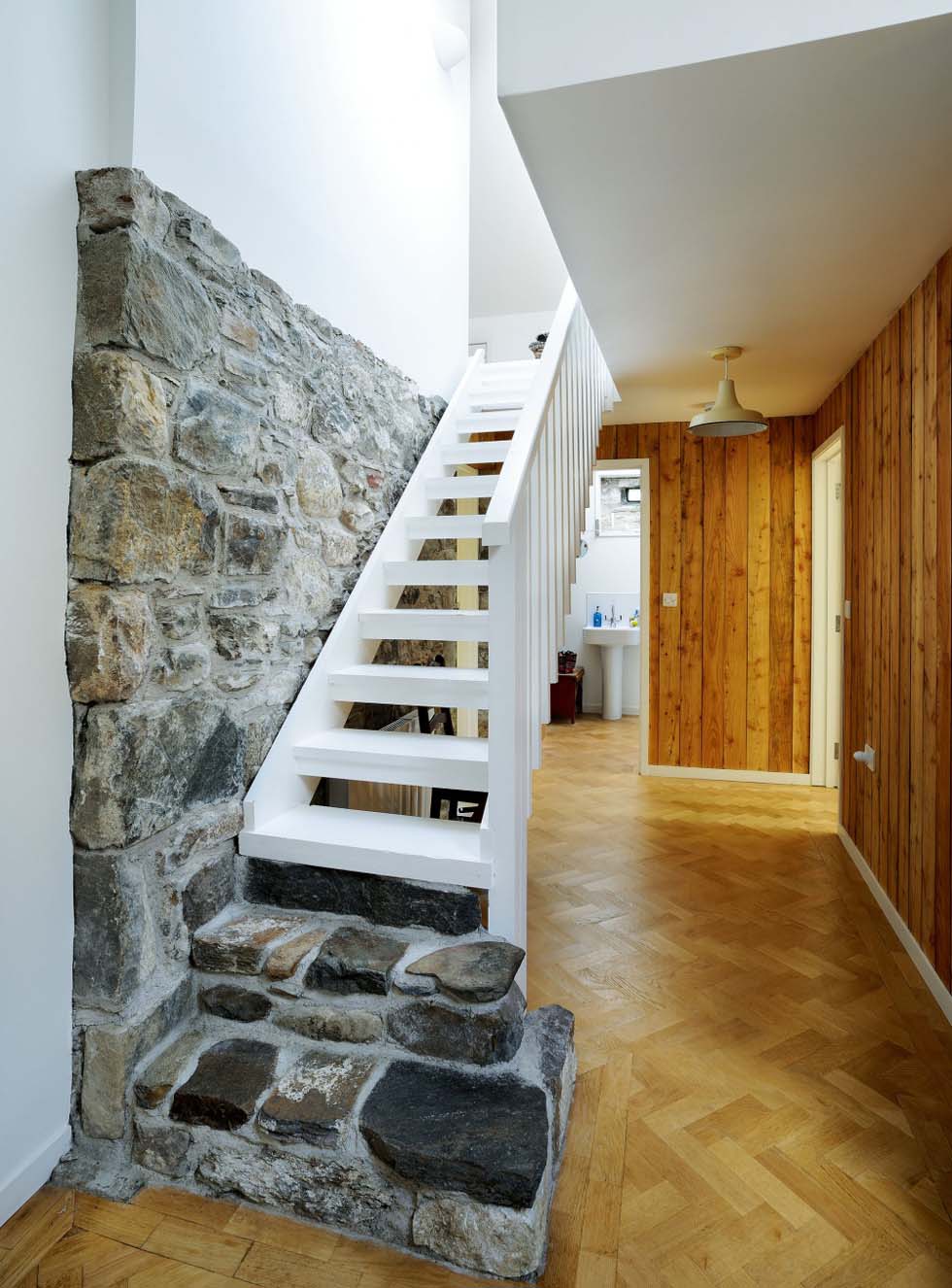 Indeed there’s “absolutely nothing” that Linda would change. “I’d always wanted to build a house, but I didn’t realise how fantastic it would be to renovate. There are lots of features, such as the stone walls and slate roof that we wouldn’t have been able to recreate in a new build. I couldn’t believe how lovely it looked when it was finished. I was blown away.”