Ellen and John McCann’s homebuilding journey has culminated in the contemporary, one and a half storey, timber frame new build they have dubbed ‘Minister’s Walk’.

Their route, however, was rather circuitous and involved a leap or two into the great unknown. When the couple bravely sold the house that had been their home for 20 years and moved into rented accommodation, they had little idea of what their next house would be like.

Ellen and John fell in love with a plot that was once a walled garden between the local church and its manse house.

The site had outline planning permission for a single dwelling and stunning views so it was too good an opportunity to miss. 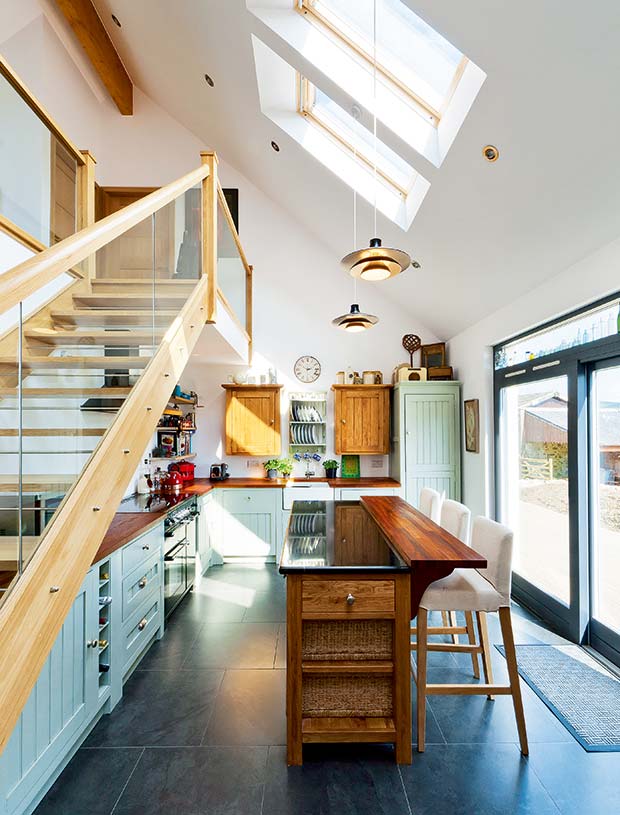 The couple met architect, Andrew Black, at a Homebuilding & Renovating Show. They liked his designs and explained their requirements to him.

They had chosen to build their own home as the older properties they had viewed needed too much work, and the new builds were too close together. It also gave them the chance to specify exactly what they wanted: 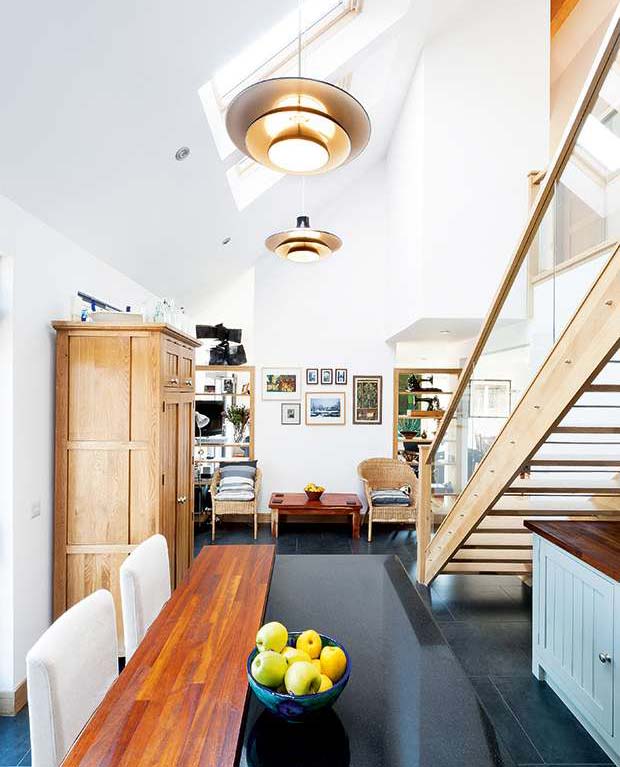 The couple opted for what their architect describes as a ‘hybrid home’ – where bespoke meets timber frame kit – in the form of a kit from Firefly Wood.They chose the ‘Borve’ house which is specifically suited to south-facing plots like theirs. The layout keeps service zones to the north and living spaces to the south to make the most of the sun and passive solar gain for warmth. The design is open plan and has double-height living spaces to maximise light.John and Ellen were able to customise aspects of the house to fit their lifestyle. They chose to dispense with the fourth bedroom, including a studio and study space instead. They also removed several doors to enhance the open plan arrangement.For the interior they used oak and ceramic floors with oak detailing in the staircase and kitchen. Keen to use local materials, they chose stone and cedar cladding for the exterior and reclaimed Scottish roof slates. 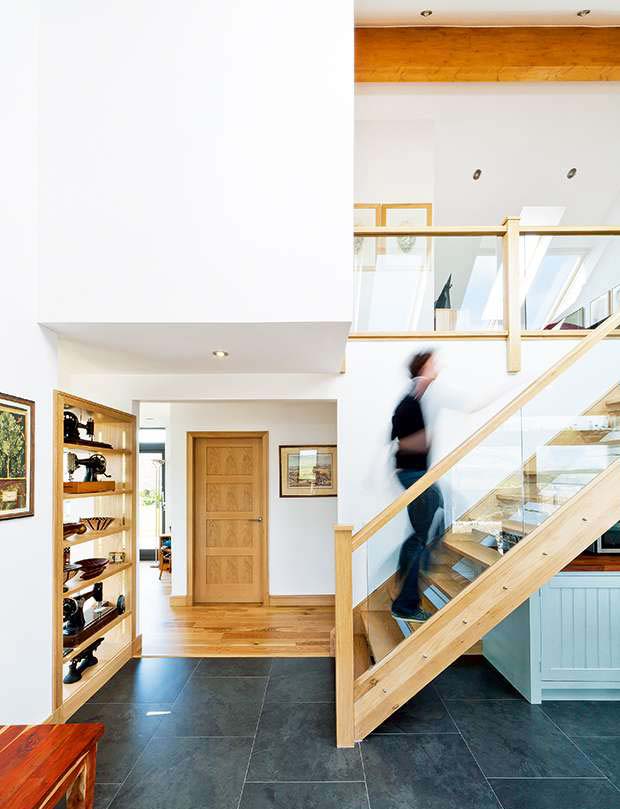 At the final design stage, the couple took advantage of Andrew’s service to take the proposal through planning and secure the necessary consent. He also managed the tender process in terms of the main contractor. 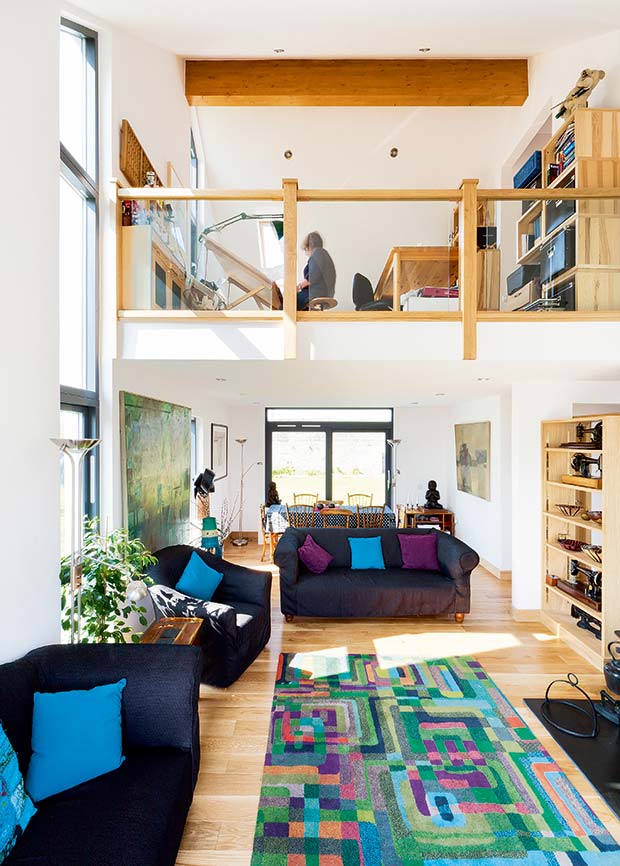 On-site work started in the summer of 2011. John and Ellen lived nearby and were regular visitors to the site, but were keen to leave it to the professionals as they had thoroughly discussed the design and details with Andrew beforehand.The structure was up within a week, and the couple were able to move in by Christmas of the same year. 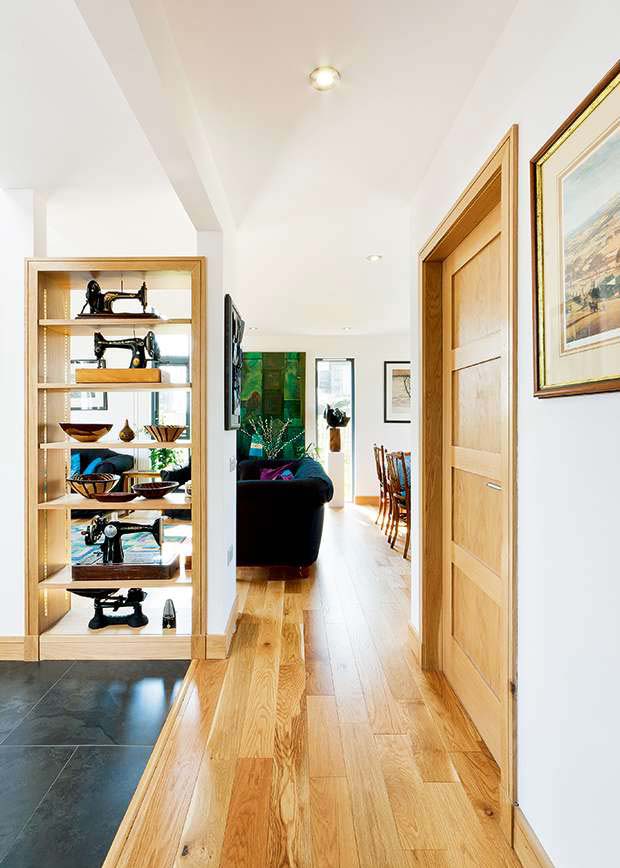 The couple were very proactive on the energy efficiency front. As well as a southerly orientation for passive solar gain they:

Not only has the house provided them with a comfortable place to live which is cheap to run, it has also inspired Ellen’s work.“From my studio I can watch the shift in the colours of the surrounding fields as the seasons change. I’ve now turned more to landscape for inspiration in my work than I did previously. The house provides the perfect balance for the way we live and work.”