When David Illius and his partner Caroline (an architect) bought a rundown 16th century cottage, the plastic bags stuck into holes in the thatch were a sign of troubles to come.

Forced to buy a ‘fixer upper’ by 2003’s booming housing market, David knew this was not going to be the easy way onto the property ladder. However, determination and a bit of specialist help has enabled them to turn the damp cottage into a comfortable family home.

The 16th century building had originally been part of a row of three workers’ cottages, but half of the row was knocked down, leaving the one and a half cottages that make up David and Caroline’s home. It had been renovated in the 1960s, but many of the measures needed to be swapped for materials and styles more sensitive to the age of the building.

On the day David took possession of the home, he went in to find the walls running with water and severe damp issues in the rear wall. So, as soon as they moved in they invited the local planner and conservation officer round to talk through the essential works and what would be feasible in the Grade B listed property.

The cottage is unique to the area as very few local homes still retain the original roof structure. With this in mind, they were in the position to apply for a grant from Historic Scotland who covered 50 per cent of the re-thatching costs.

The work was undertaken by master thatcher Peter Brugge, who works across the whole of the UK. Peter and his team stripped and re-thatched the roof in just over three weeks using water reed grown in Perthshire, Scotland (as stipulated by Historic Scotland).

Once the old thatch was removed, the cottage roof was then felted with fire-resistant felting and the new thatch laid on top, with each course of thatch overlapping the one below and fixed with a screw and stainless steel wire. On the ridge of the roof, Peter and his team replaced the old turf ridge and attached the reed with clay — binding it together to make it watertight.

With the re-thatching complete, David insulated the thatch roof internally with 125mm of sheep’s wool insulation to allow circulation. To enable the whole roof to breathe, plasterboard was then placed over the insulation and taped and filled – rather than plastered – and was then painted over with breathable paint. 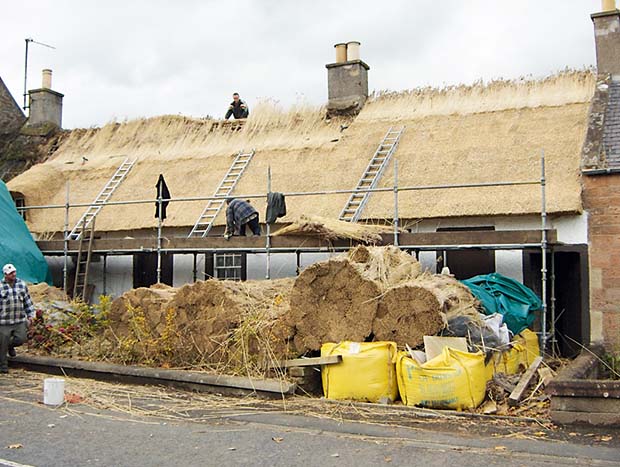 The next big job was to rectify the damp plaguing the rear wall of the property. David received quotes from a couple of builders to install a damp-proof course in the back walls, but the cheapest quote was £10,000. Luckily, he realised that the reason the walls were damp was because the ground level at the back of the house was higher than the internal floor level, thus pushing moisture inside.

David employed a man with a digger to removed the earth at the rear of the property (which came almost to windowcill height), then underpinned the back wall. He then poured gravel into the foot deep trench he had created to allow the wall to dry out and let any new water drain away.

With the damp addressed, and the house watertight, they started rebuilding inside. The old floor was sitting directly on the ground below, so before he could replace the flooring, they laid a damp-proof membrane then insulated the floor with Kingspan and topped it with a layer of concrete. Solid oak flooring was laid on top.

They also wanted to convert the loft space into a third bedroom, but were limited by headroom because the ceilings below had been raised during the 1960s renovation. In order that the loft conversion complied with current Building Regulation, the only way to achieve the headroom required at landing level was to run a new staircase between two of the existing roof rafters and form a new landing platform which was lower than the first floor level.

The Chalon kitchen was bought on Gumtree for £2,000. David removed four layers of lino flooring and old flagstones to lay a new insulated concrete slab in this room

David worked away on the cottage bit by bit, installing the central heating, insulating the walls, fitting new windows, building cupboards and removing fireplaces. Along with Caroline he has turned the cottage into a modern version of its 16th century self, which is warm, stylish and welcoming.