In the past 20 years underfloor heating (UFH) has developed from luxury to a basic requirement of most new heating systems installed by self-builders. Low water temperatures meaning efficient-energy use (with savings of around 5 per cent against a radiator system), low-level ambient heat and, of course, no radiators to clutter up walls, are all part of the appeal. It’s easy to install at the floor pouring stage and all plumbers ‘get it’ (which can’t be said about many other ‘innovations’).

For those working with an existing home, however, the landscape is different. Speak to most owners of older homes about underfloor heating and they’ll think of the type of mat or wire-based electric systems that are ultra-thin, relatively cheap to buy, but hardly serious considerations for a whole house. Warm water underfloor heating was previously installed in renovations, but only on those projects that involved serious work.

That was the history. Today, the reality is that underfloor heating manufacturers have quite rightly recognised that their potential sales market in terms of new build homes is limited. So new solutions were required to open up new markets.

This new market is the renovation market, and a number of systems have been launched that promise to bring the benefits of underfloor heating to those improving old homes — not least because the new wave of renewables, particularly heat pumps, demand low flow temperatures to work efficiently.

Most of the key underfloor heating providers tend to band their offerings for renovators into three main UFH systems:

In-floor: for those carrying out work that involves the floors, a new underfloor system can be built into the replacement floor structure, in the same way as for a new build;

Over-floor: this is where a lot of recent innovation has occurred. Traditionally, the solutions either involved a very thin water pipe-based system which had limited heat output, or systems with better heat output but greater build-up depths, resulting in problems with door thresholds, etc.

One of the traditional problems with systems that utilise super-low build-ups (effectively the total additional thickness of the system) is that heat output was moderate. Nu-Heat’s LoPro™ 10 is one such system, which consists mainly of pre-routed 15mm gypsum boards through which a 10mm PEX pipe is run. The pipes then run through a castellated tray, requiring a slightly thicker build-up, back to the manifold. Nu-Heat happily admit that the system is only designed for houses with impressive insulation credentials, not for leaky old homes.

The main problem with low build-up systems was that they struggled with heat outputs. Running a flow temperature of 40?C (typical of traditional deep screed underfloor systems) with standard engineered wood flooring would output 40W/m². Over a 100m² ground floor area, that’s 4kW — you would need some quite impressive insulation levels to feel comfortable at that sort of output.

Let’s assume a typical home’s heat load is 10kW and a typical house size is 150m²; this requires a heat output of 66W/m². As you can see, the lower systems can do it, but it demands a higher flow temperature which inevitably reduces the energy efficiency of the system.

So what’s the solution? Well, Nu-Heat have introduced a new system called LoPro™ Max which utilises a thin layer of highly conductive self-levelling screed (apparently they’ve spent considerable time testing out the best screed types to ensure maximum conductivity) which is poured on to a 22.5mm-thick castellated panel (into which those 10mm pipes are fitted). This, Nu-Heat claim, gets the best of both worlds:

One of the big mysteries of the retrofit underfloor system is the pipe. Obviously, thinner pipe means lower build-up. Traditional underfloor heating pipe is more like 15mm.

One would assume that a bigger pipe equates to better output, but, according to Heather Oliver from Nu-Heat, that’s not the case: “Because on a thinner pipe there is more contact with the screed – effectively more surface area of piping touching the screed – then output is actually better with these thinner pipes. We offer a 10mm and 14mm pipe, but most commonly specify the 10mm.” Spacing between pipes can be adjusted by the designers to adjust output if required.

What about insulation? Traditional deep screed-based systems tended to rely on a heavy insulation layer below the screed to ensure that heat wasn’t lost through the ground as opposed to rising into the room.

“The panels used in our ‘over the floor’ systems are all insulated to ensure heat isn’t lost,” says Polypipe’s Corey Kitchener. “Because the panels themselves are insulated, no layer of insulation is then required between the system and the floor covering. This makes the systems ultra-thin — perfect for renovators who don’t want to add extra height to a floor structure.”

Nu-Heat’s new LoPro™ Max has such a high heat output, according to Heather Oliver, that it can also afford to operate without an insulative layer. 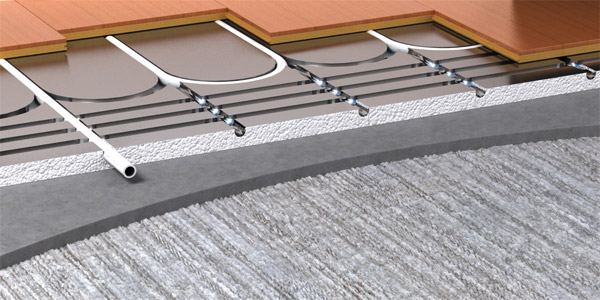 The Underfloor Heating Store‘s overfloor system for floating floors is made up of XPS insulation boards with a foil layer to evenly dissipate heat. They are easy to lay and can be used on any floating floor such as engineered wood or 18mm floor-grade chipboard. 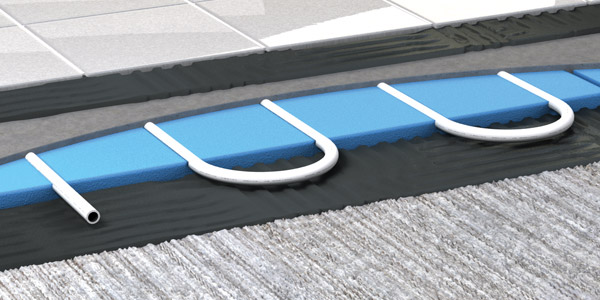 The Underfloor Heating Store also produce low profile solid floor panels for use with tile or stone. They are made from high density XPS insulation and have preformed grooves to clip the pipes into.

Once you have decided which type you need according to your floor system, you can then decide between single room and multi-zone systems. 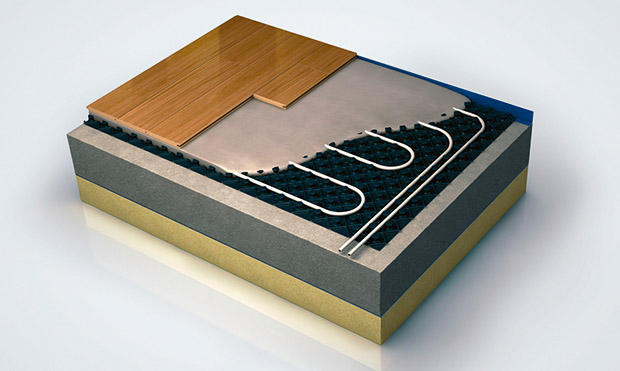 Nu-Heat’s LoPro™ Max enjoys high heat outputs and a minimal 22.5mm-deep build-up. It can easily be laid on top of existing concrete floors as well as suspended timber.

Polypipe’s Overlay™ Lite system, with a depth of 18mm, is a lightweight, insulated panel using a 12mm pipe at 150mm centres. It can acheive outputs of up to 100W/m².

Other Suppliers of underfloor heating systems suitable for renovators include:

Try www.theunderfloorheatingstore.com for a range of different options

Electrical systems have traditionally been the go-to option for homeowners looking to create a warm floor in existing kitchens and bathrooms. The main choices are a loose-wired system, taped down, which mimics the looped effect of a warm water system; a mat consisting of a fibreglass mesh into which the wires are pre-placed; and a foil system, in which the foil itself acts as the heater.

Low capital costs (expect to pay £40-70/m²) and easy installation, with minimal disruption and negligible effects on floor levels, are the key attractions, as are average heat outputs of between 100-150W/m². Running costs complicate the issue however, mainly as electricity costs around three times the price of gas and oil.

The key is to have the boiler set up to directly control (through a two-port valve) the underfloor heating as a different zone — ideally in conjunction with a manifold that enables larger retrofit UFH systems to have multiple zones (i.e. different rooms). Without direct boiler control, you’ll be running the system at the same times, and temperatures, as your radiators. Ensure your plumber and electrician installs suitable controls too.