A Georgian industrial building gets turned into an awesome family home, thanks to the vision of Henning Stummel.

Living in an elegant townhouse in one of London’s most fashionable neighbourhoods might, one would think, be enough for most people. But for Henning Stummel, his Georgian home in Marylebone had its drawbacks: stairs. Lots and lots of them.

So when the estate agent who had sold him the house telephoned one day to see if he could be persuaded to sell it on, now that he had restored and extended it, Henning was open to offers — provided that the agent could find him somewhere with “lots of lateral space”.

It’s not often that one has sympathy for estate agents but in this case one must, because in this densely populated corner of the capital, lateral space is a rarity. Even Madonna, who lives locally, could only solve the problem by buying the next-door house and knocking through. Nevertheless, a few months later, not only did the agent have a buyer lined up for Henning’s home but he had found a portion of disused industrial space in the neighbouring area of Paddington in which Henning and his wife, Beatrice, and young daughter, Justine, could live. Eventually.

The space was raw as onions; an early 19th century building that had been used variously as a coach workshop for the hackney carriages working from nearby Paddington Station and, more recently, housing an antiques restoration business. It was, quite frankly, decrepit and it took some persuasion in order for Beatrice to agree to consider it at all. Had she known just how long its renovation would take, she might have dug her heels in deeper. 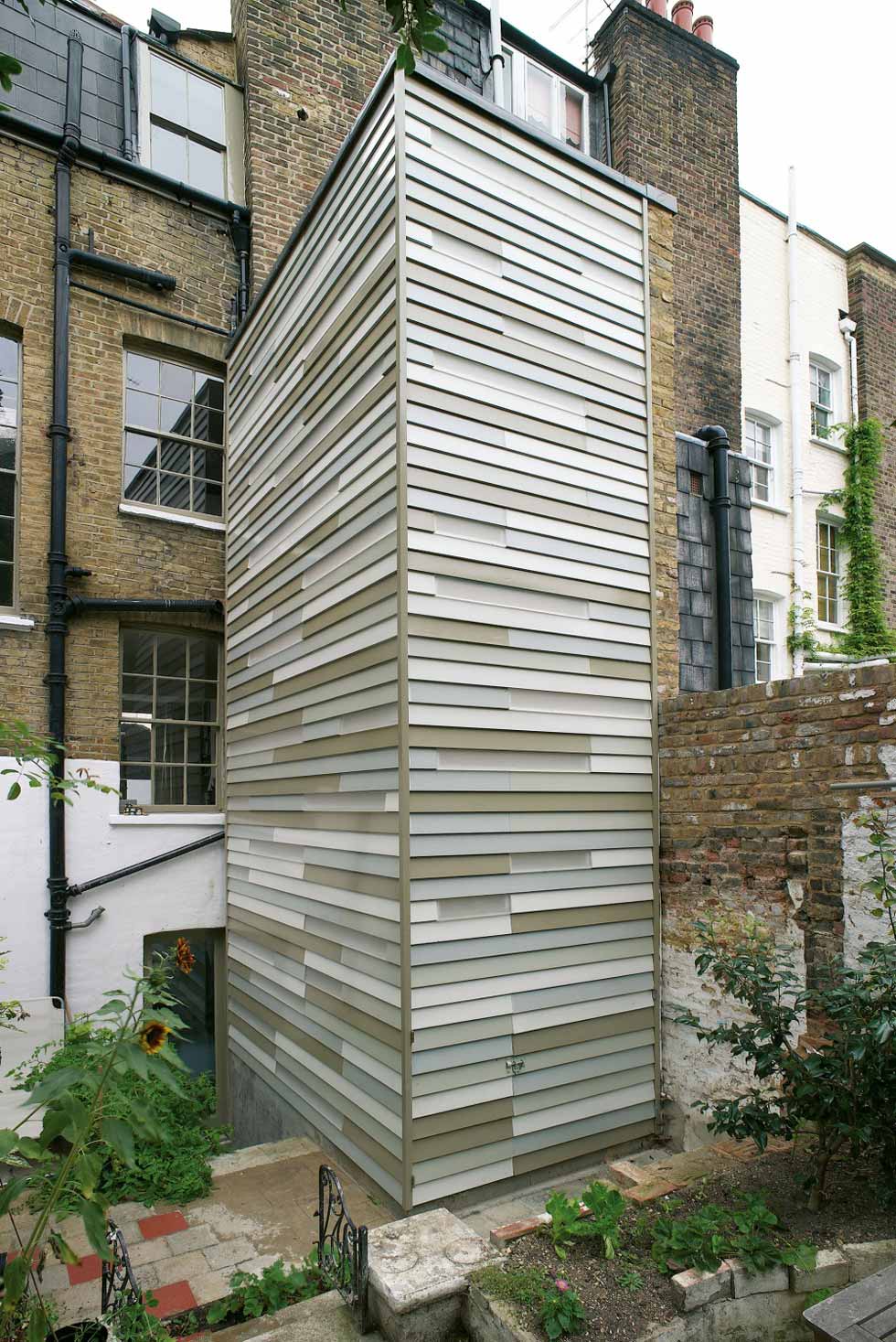 “We moved into rented accommodation; it wasn’t a very big place and we were there a lot longer than she would have liked,” says Henning diplomatically of the 18-month build.

The problems, it seems, were two-fold. First, the building was not suited in any way to residential accommodation; second, it was in an extremely poor state of repair as well. Divvying up the space was one thing, but keeping it standing while making the most of the open plan lateral space it could provide was something else — as the hefty structural engineer’s bill makes clear. Not only did Henning manage the space sensitively but, despite having its roots in an industrial past, the building feels convincingly like a home. 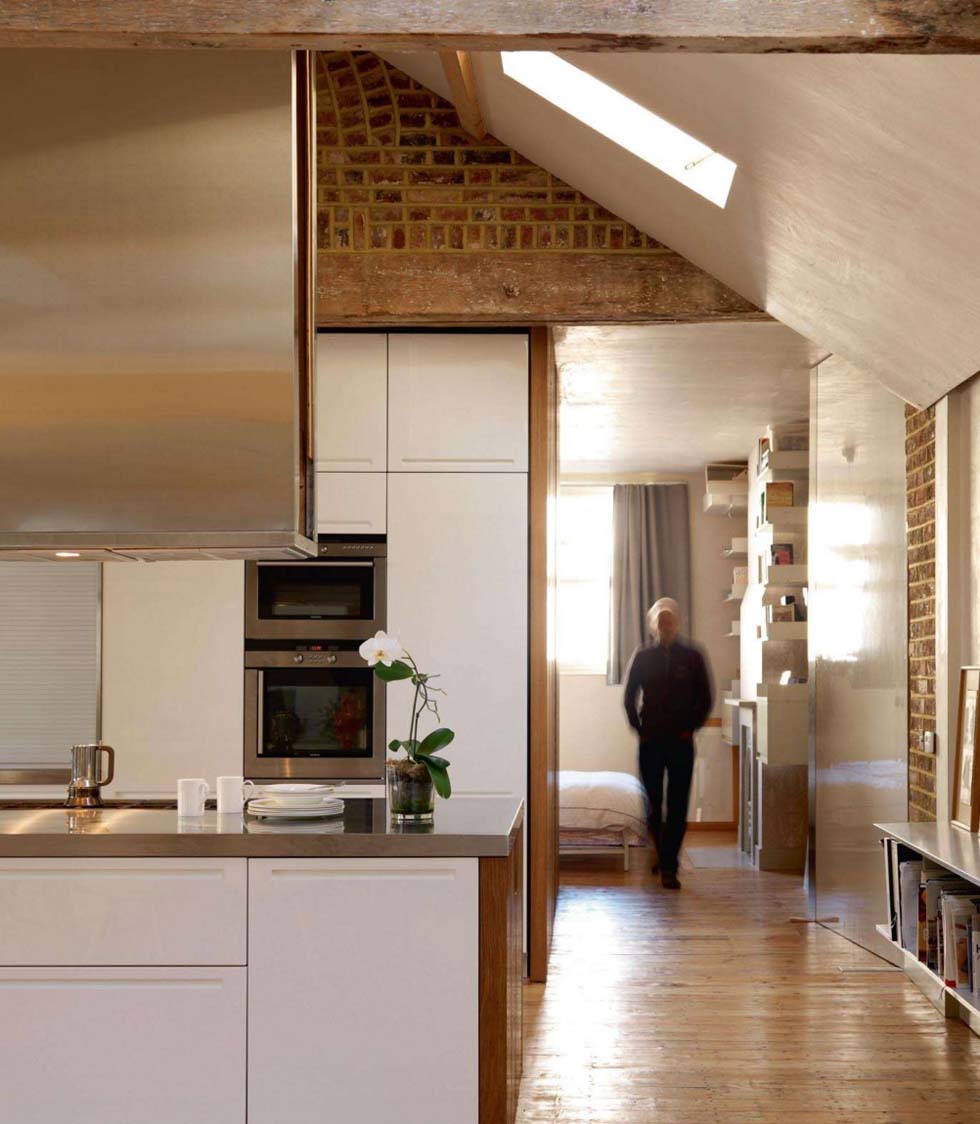 How has he managed this? By respecting the building he was transforming. “Even such a simple utilitarian piece of architecture as this one, with very limited scope of expression, was given an incredible degree of thought,” he says of the design of the industrial block. “My appreciation for the Georgian obsession with proportions in this instance is bourne out of an awareness of this.”

The result is the spectacular lateral entertaining area that Henning had hoped for: a first floor space with a vaulted ceiling, wide and long and tall. There is an enormous gleamingly white Boffi kitchen island and gargantuan extractor fan dominating one end of the room, a long, sleek dining table running parallel to it and a cluster of recognisably designer seating at the far end of the room. The bare brick has been beautifully repointed and subtly reinforced in places with large panels of white render softening the industrial edge. 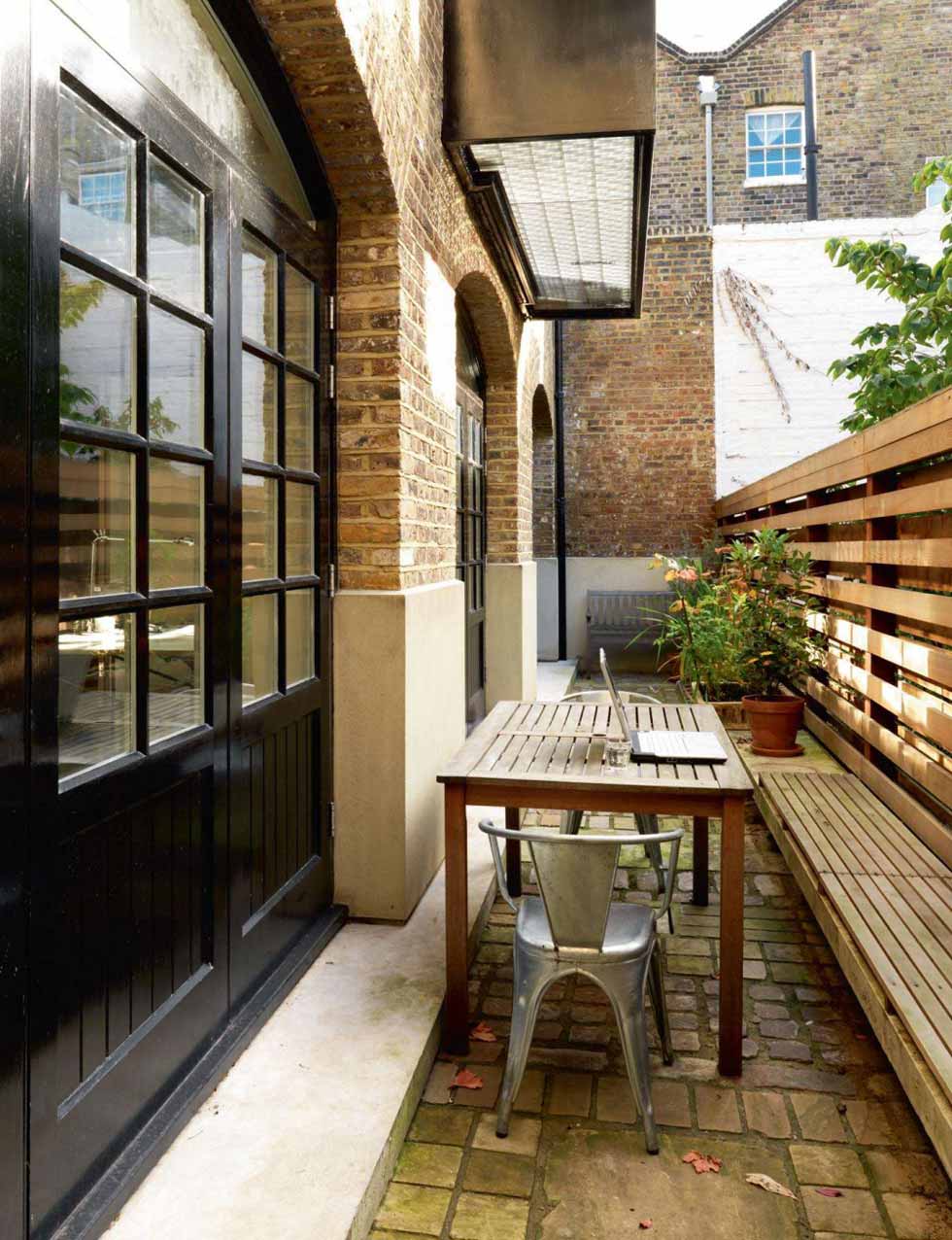 Readers with very long memories may remember that Henning’s Marylebone home won extension of the year in the 2004 Awards. There, frustrated by the planners’ insistence that the windows of his three storey rear addition should be “in keeping” with the Georgian house, he devised a stunning, seemingly windowless structure. Clad in horizontal lengths of timber, the slitshaped openings were covered in opaque Perspex which blended into the drab-painted wood around them. At night, when lit up, it glowed like a lantern.

This time, however, Henning has gone to inordinate lengths to match the windows in this Georgian building, commissioning tropical hardwood frames in order to get the width of the glazing bars just slim enough. “This was completely different, it was a renovation not a new build and I had to respect the detailing,” he explains of the pains he took, not only with the windows but to restore and match the wooden floors as well. He has even decorated two of the walls in the master bedroom with an elaborate, silvery hand-blocked paper, contemporary with the age of the building. 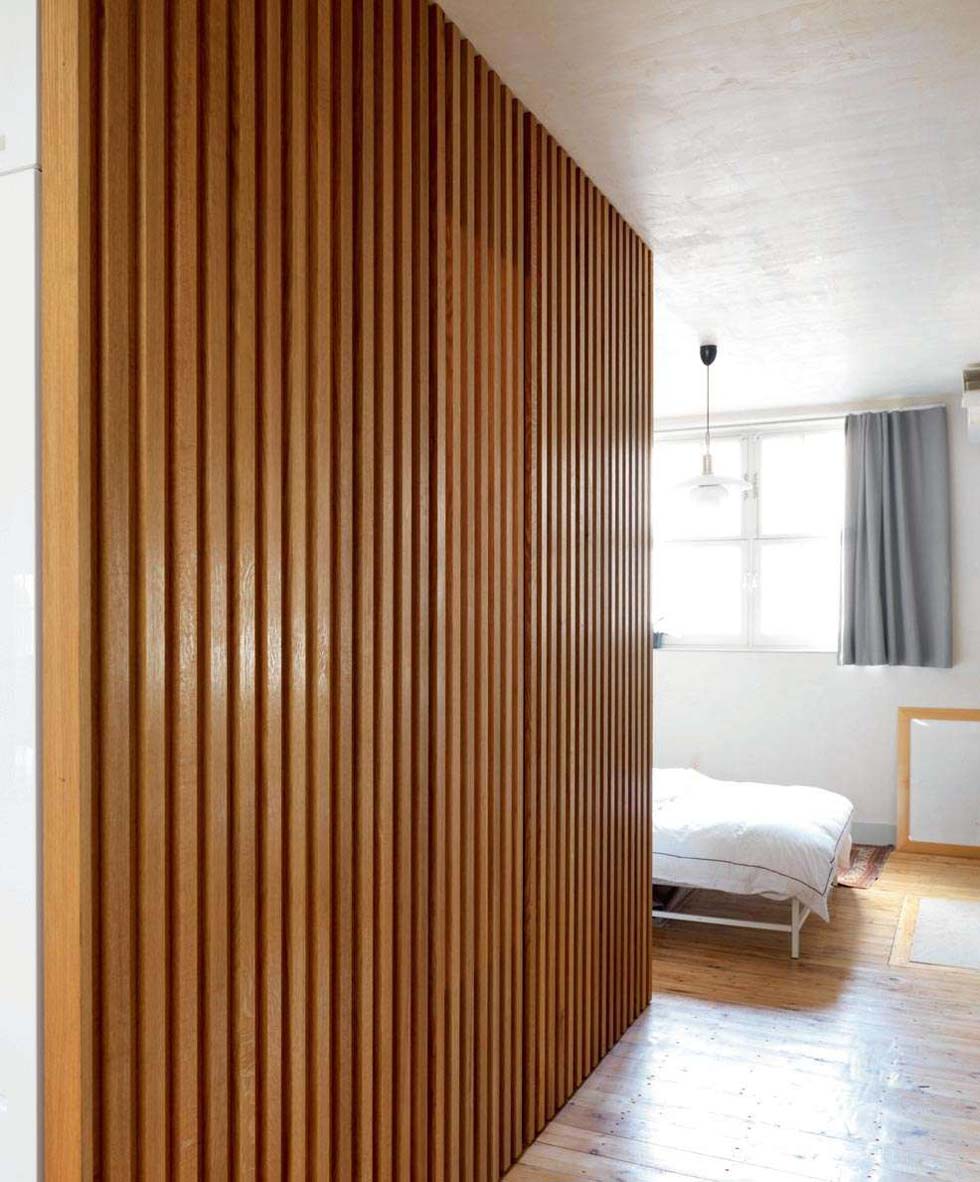 He has not completely lost sight of his radical extension’s aesthetic, however, this time working a large box structure into the centre of his living space. Constructed from thin lengths of oak placed vertically to form a corrugated pattern, its walls shoot up two storeys high in places. Doors into its various spaces have slim fillets of Perspex inserted (sound familiar?) through which the internal lights glow.

Very loosely based on Mies van der Rohe’s chunky island of cabinetry at the centre of the achingly restrained Farnsworth House, it was designed to conceal all the ugly necessities of modern-day life: a gigantic, beautifully made closet, if you like, containing bathrooms, a boiler, a dressing room, utility area and storage. Not only does it eradicate the need for endless hallways and stud-wall divisions but it enhances and accentuates the space that is already there.

Inside, the spaces are compact but well realised and made from a range of unusually utilitarian materials: Perspex forms a shower screen, Formica-covered panels have been turned into extra-tall doors. This simple, pared-down pallet has been continued in his daughter’s bedroom, the guest bedroom and bathroom all on the top floor. With much more of a quirky, almost creaky, attic feel compared to the loft-like space below, the area has been given polish by these modern materials. 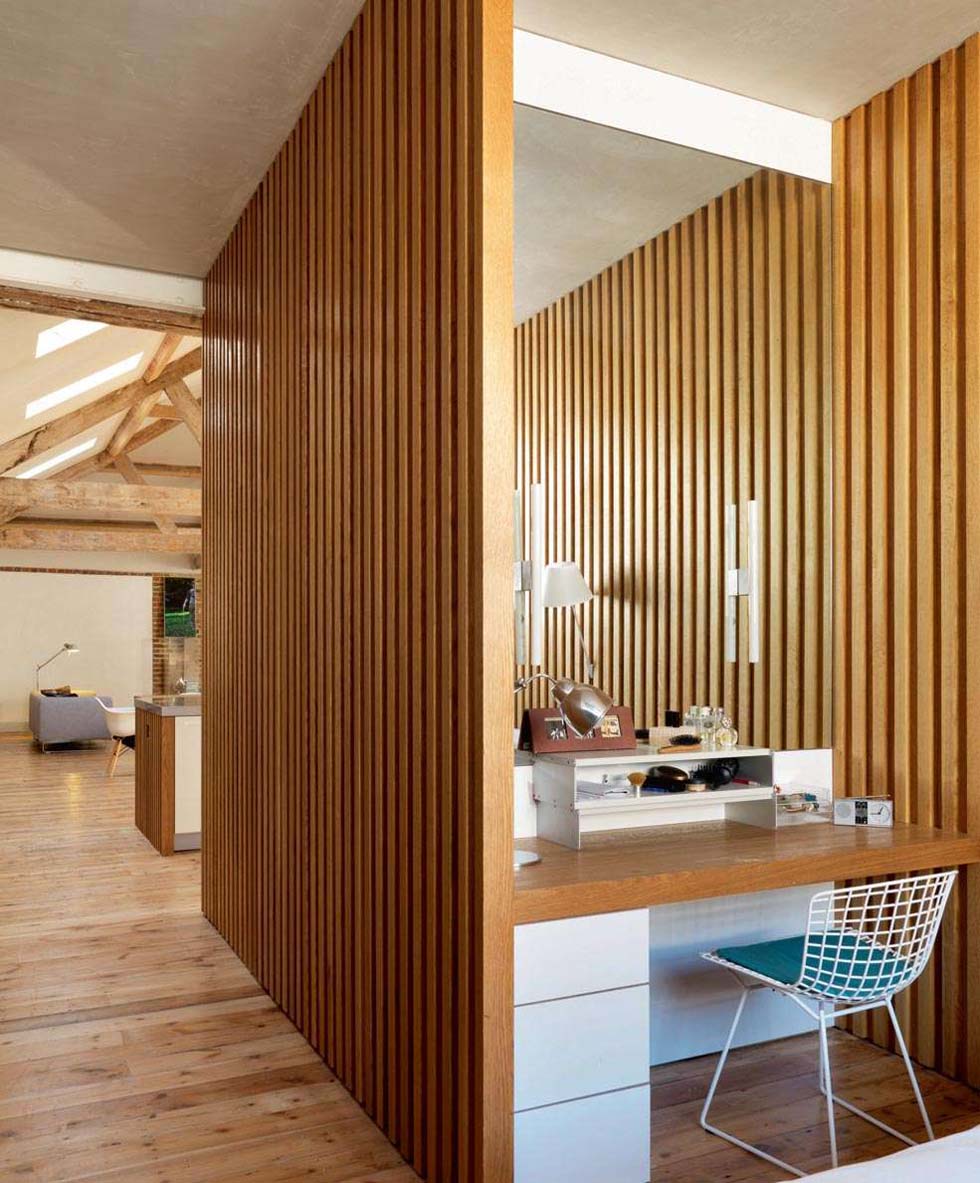 That Henning got this quality of finish despite using materials at the less razzmatazz end of the interiors spectrum says a lot not only about the quality of the design but also the craftsmanship of his builders. “I used a foreman that I had worked with before. He was a bit of a sergeant major,” he grins. “He was very good at giving orders and making sure that he got the best out of everyone.” Nevertheless, Henning still worked on the project more or less full-time for the whole of the build, turning down work to complete it and finally moving his family into the large studio space on the ground floor when they had to move out of their rented accommodation.

Now that the family are installed in comfort, the privations of the build seem more bearable. Nevertheless, it is hard to imagine that Beatrice will agree to another big project in the near future but, what is the Stummels’ loss may be self-build’s gain as Henning will at last be free to design his thoughtful and effective schemes not only for his immediate family. 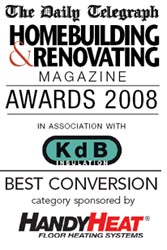 If the art of successful conversion is to create a unique family home that meets specific modern requirements while at the same time being completely true to the original building, then Henning’s home is the perfect example.

The judges were impressed by the bravery of Henning’s vision in light of not just the dilapidated state of the original but the long, open spaces that wouldn’t at first lend themselves to a domestic scheme.

Yet Henning has been refreshingly sparing in his design of the main space, letting the building do all the talking — and only intervening to install his signature ‘bathroom pod’ and bedroom spaces. The open plan approach is light and airy and works perfectly as a family space, with a mix of a dramatic entrance and cosy spaces.