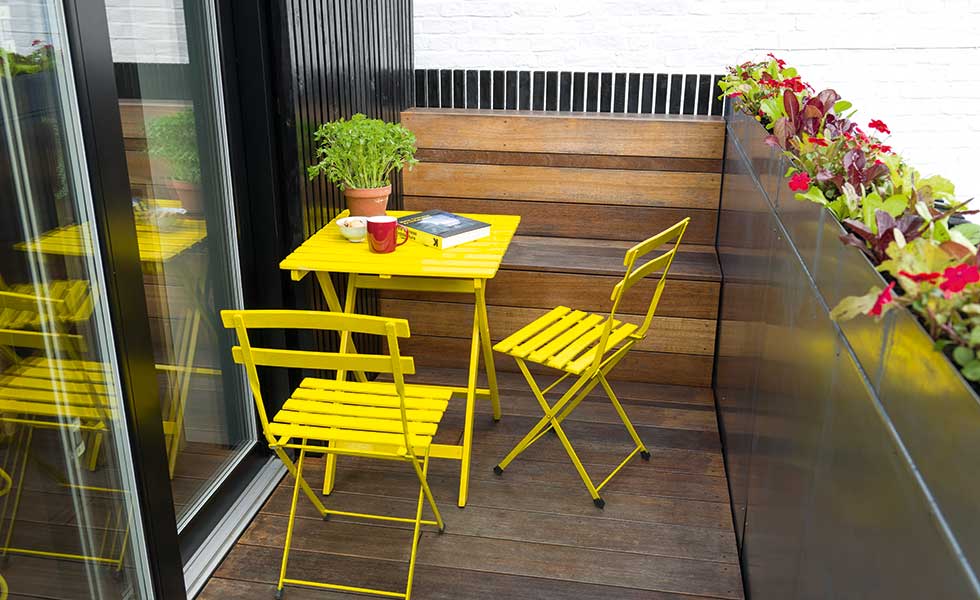 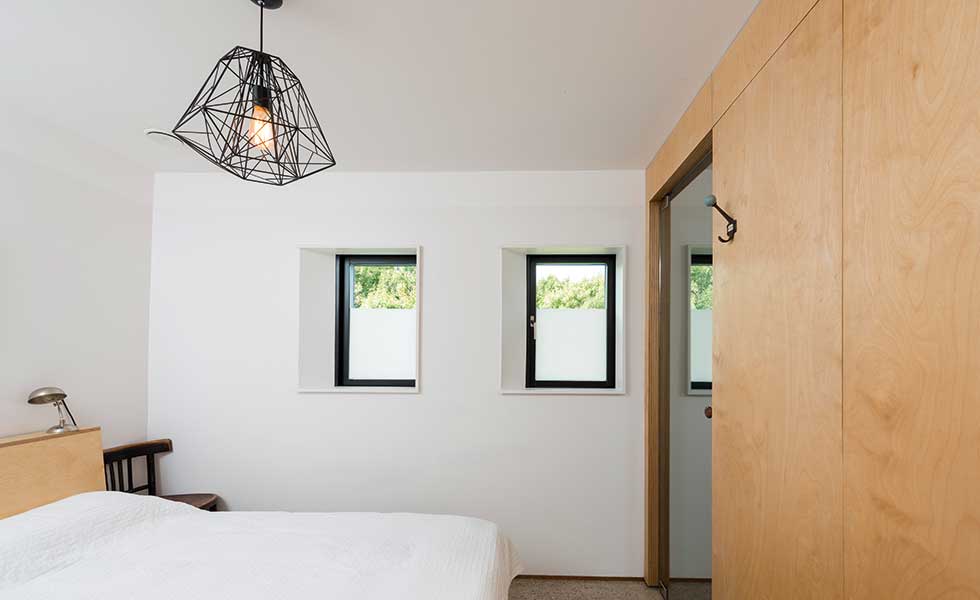 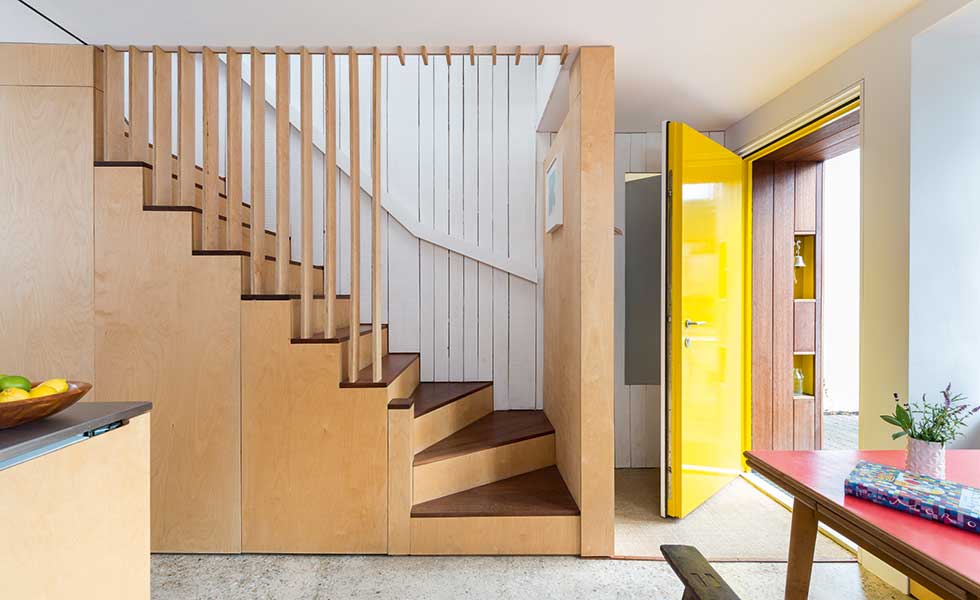 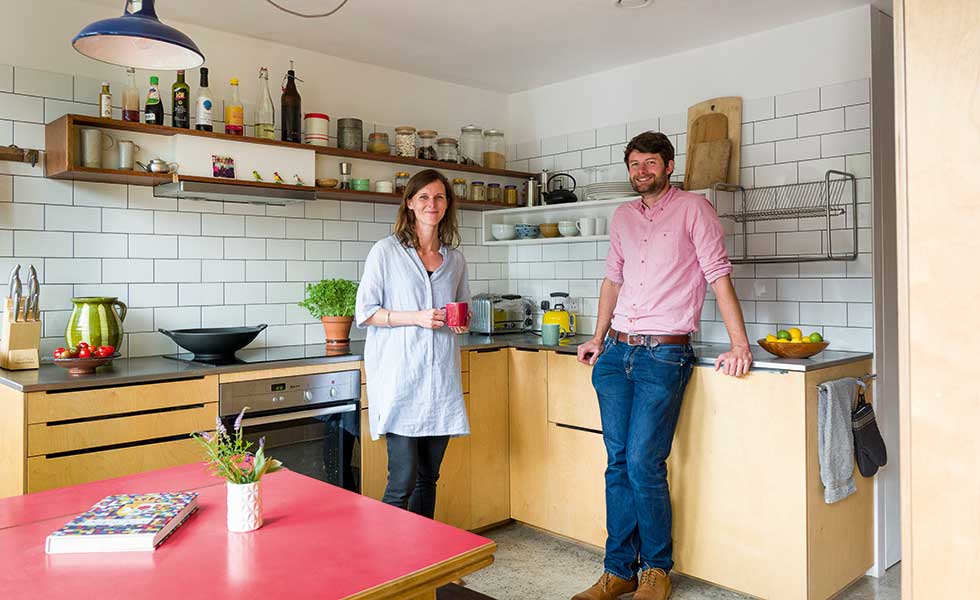 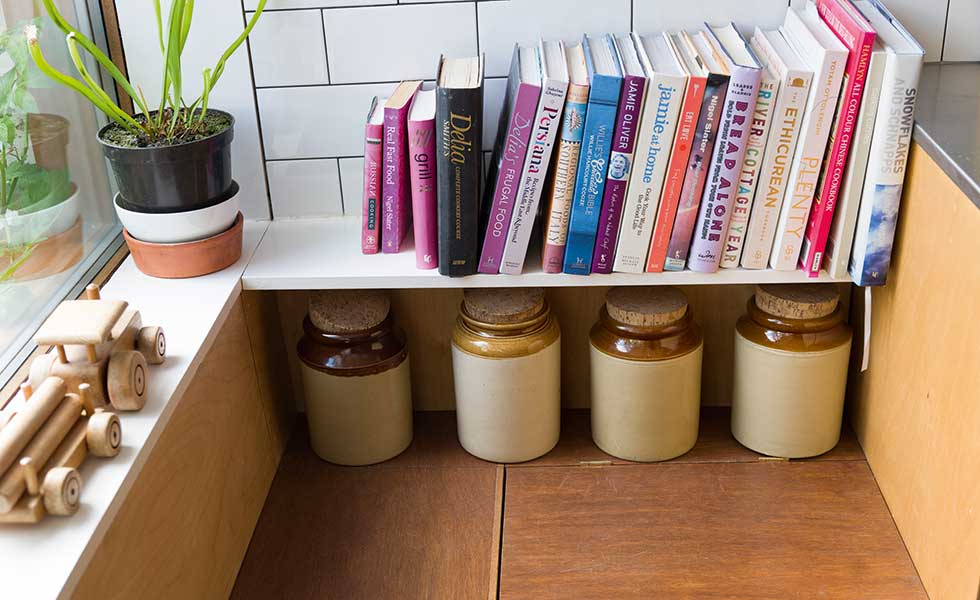 “It was the cheapest thing available; and it was within our means,” begins Oscar Baldry, describing the derelict newsagents that he and partner Clare Williamson went on to purchase for the sum of £33,500, and artfully transform into their new home.

Having spent some time travelling and living in a van that they had converted into a temporary home, the couple were ready for a conversion project on an altogether different scale — and one which would offer an opportunity to gain a foothold on the property ladder.

The former newsagents in Shrewsbury had closed for business almost a decade previous, and had been on the market for some time; there had been several rejected planning applications to build a new two-storey dwelling on the site.

Still kitted out with its original shop fittings (one shelf was even stocked with chocolate bars and Pot Noodles), the building was showing serious signs of neglect, including settlement and a roof in desperate need of replacement.

The couple approached the vendor, agreeing to purchase the building subject to receiving planning permission and successfully securing a change of use.

As an architect, Clare was well-placed to develop the design, with Oscar, a structural engineer, bringing invaluable knowledge. Clare’s proposal saw the fabric of the building, in particular the original brickwork and shop front, retained, with a new first floor timber frame extension added.

A striking mix of white painted brickwork with black painted timber cladding above was proposed as a nod to the ‘black and white’ Tudor buildings found throughout the town. The cladding proved the main sticking point with the local planning department however, who favoured white render, in keeping with adjacent properties.

Fortunately the conservation officer could see the merit in this element of the design, and the application was subsequently approved. After completing on the sale, the couple parked their converted van on the driveway, ready to roll up their sleeves for what would become a very hands-on project.

Working to a Tight Budget

One of Clare and Oscar’s main ambitions for taking on this project was to create a home that would leave them with little to no mortgage. And so they set themselves a tight budget — and kept a close eye on costs throughout the build.

“I created a thorough budget plan before we started,” begins Clare, who acted as project manager. “If, in the course of the month, we overspent, I’d then look to how we could save money elsewhere. I was constantly reviewing the budget plan.” Savvy specification was also key. Of course, the couple saved money on professional fees, but even so, their incredible build cost is as much down to taking on most of the build themselves. They estimate they completed around 90% of the work between them — from underpinning the foundations right at the very start to insulating the building, installing the timber cladding and creating all the joinery.

Clare and Oscar estimate that they took on around 90% of the building work themselves — including insulating and laying the concrete floor slab; installing the mechanical ventilation heat recovery system (pictured below, top);  fitting the kitchen (pictured bottom) and taking on all other joinery within the building, among many other tasks on site.

Recognising the need to get the building watertight as swiftly as possible, they hired trades to complete the roof. They were also aided by a local carpenter when building the first floor timber frame extension. (Kind neighbours were of great help too; one neighbour even plated up a roast dinner for Clare and Oscar every Sunday.)

Clare and Oscar opted for rough-sawn timber cladding for the ceiling and walls of the first floor living/office space, to add texture to the walls and keep plasterboard to a minimum (as a means of eradicating ‘wet trades’ from this project).

This living space also opens up to a small terrace

Just before taking on this project, Clare qualified as a Passivhaus-certified designer. As such, the project provided the “perfect test bed” for applying Passivhaus principles.

The decision informed some of the major construction decisions.

“We’d have liked the house to have been certified,” reflects Oscar, “but our (very tight) budgetary constraints meant we couldn’t afford to specify certified products and pay for the certification process.”

This well-insulated, airtight home has provided an added bonus — minimal running costs. The low-energy design also removed the need for (and added expense of) a boiler. The house is heated by two 400W electric heaters and a 55W towel rail instead, with hot water provided by a tank concealed beneath the staircase, which was exactingly designed to accommodate this feature.

A studwall between the staircase and the Passivhaus-certified front door provides a lobby space. This wall also doubles up as useful storage with long drawers incorporated under the stair and a place to hang coats.

Smooth birch-faced ply has been used to clad the staircase — which the couple built themselves. The concrete slab was stepped down beneath the staircase in order to accommodate the 90litre hot water tank and washing machine beneath.

The couple now grow beans along the front window not simply for the produce — the greenery was always an integral part of Clare’s design, with the vines providing solar shading in the summer months (and lending privacy).

The couple created the birch-faced ply kitchen doors themselves, pairing them with Ikea carcasses to create a bespoke kitchen on a budget. The robust, practical stainless steel worktop was one of their biggest spends at £1,000, but both agree it has been worth the investment. Appliances were specified second-hand or as seconds, again helping the couple to remain within budget. Introducing open shelves rather than wall units adds to the illusion of space in this small home.

Plywood cladding was continued down the length of the bedroom and bathroom — creating a sense of flow between the kitchen and bedroom.

The bathroom facilities have been split into two — allowing the toilet to be accessed while the shower is in use. The couple stepped the concrete slab down along this side of the build — this allowed  for a high-level ventilation gap to be created between the two spaces and space for hanging clothes at high level in the bathroom.