Perhaps you have recently found out that your home has subsidence or maybe you are interested in a renovation project that you suspect may have structural issues — either way, you are probably wondering what underpinngin costs.

Whilst subsidence might well cause a sense of alarm in anyone buying a renovation project, it isn’t always the disaster many people think it is. Many subsidence issues can actually be solved fairly easily.

Whilst it is often the irregularities of period properties, such as sloping walls, that often contributes heavily to their overall charm, they can also point to a potential movement issue.

Is Structural Movement a Concern?

All buildings move, and older properties  tended to have shallower foundations meaning they can move more than modern buildings as they adjust to seasonal changes in ground conditions or new loadings — particularly in regions with clay subsoils.

Whilst periodic movement might also cause the odd door or window to stick in its frame, a little judicious planning could soon put right such minor niggles. So, for homebuyers with a cool head, concerns about structural movement and underpinning costs can sometimes be turned to an advantage by securing a bargain.

In this article you will find information on structural issues including:

Some cases of subsidence can occur if the ground under part of the foundations shrinks, robbing the wall of support (commonly caused by leaking drains, or long periods of drought exacerbated by trees extracting moisture). The unsupported part of the wall immediately above can then suddenly drop, with this movement causing cracking.

This is very different from ‘settlement’, where the ground is slowly compressed over time by the loading placed upon it by the building. All buildings settle after construction or in response to major new structural change such as extensions and loft conversions – as the ground adjusts to the new weight imposed upon it.

Interestingly, most insurance claims for alleged subsidence turn out only to be cosmetic damage, and the majority are rejected as invalid because the cause lies elsewhere, such as differential movement cracks between lightweight conservatories and the main house. Of the valid claims, nearly three quarters are tree-related.

Regardless of the precise cause of movement, the big question to answer in all cases is whether the movement is historic or ‘progressive’, and likely to move more in future.

So before you begin to think about underpinning costs, make sure the cause of the subsidence is thoroughly investigated.

Will Underpinning Be Required?

When it comes to cracking caused by subsidence you need to first eliminate likely causes such as nearby trees and leaking drains.

Conventional wisdom tells us that the solution to subsidence is underpinning, which involves excavation below the sunken wall and pumping in large volumes of concrete. But underpinning costs money and should only be carried out as a last resort, particularly with older properties because the part that hasn’t been underpinned will continue to naturally move in tune with ground conditions, setting up stresses with the newly rock solid underpinned length of wall. 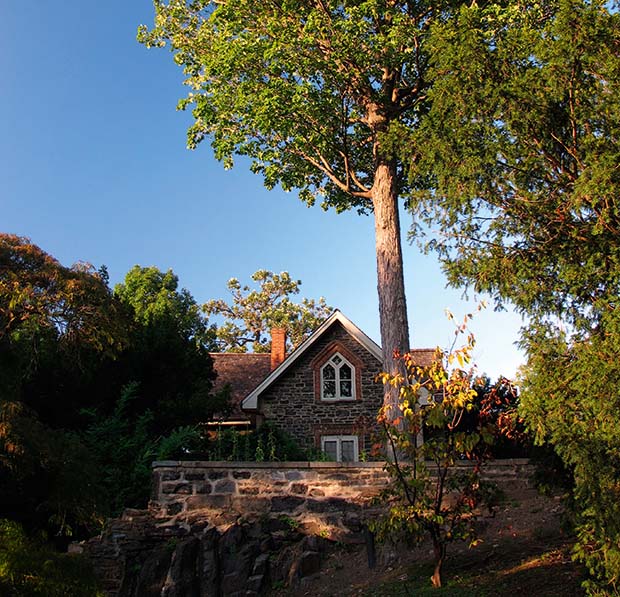 Of all the valid subsidence claims, nearly three quarters are tree related

Are Trees the Cause of Subsidence?

But if you simply cut down a large, thirsty tree, the ground may then react by swelling with moisture which is no longer being absorbed — causing ‘heave’. Be aware too that cutting down a tree protected by a Tree Preservation Order (TPO) or in a Conservation Area without consent can lead to prosecution. Tree management aims to reduce the amount of moisture uptake and how the drying out affects the soil.

One remedy is ‘pollarding’ (severe pruning), but not all trees will tolerate heavy crown reductions. For pruning to be effective, reductions of around 90 per cent are required, and some species respond to pruning with vigorous new growth which quickly restores the tree’s moisture uptake. This is why specialist advice should be sought before deciding whether to prune, pollard, or remove a tree.

Installing root barriers can provide an alternative method of tree management. This involves excavating a trench around 4m deep between the offending tree and the building and inserting large sheets made of rigid plastic to protect the whole building from the influence of the vegetation.

This method can have considerable advantages compared to underpinning, plus there’s the benefit of retaining trees. However, there can be practical limitations; barriers, for example, can’t be inserted so close to the tree that the main roots are damaged, risking instability. It’s also important that they are sufficiently robust and designed to accommodate any drainage pipes and underground services. 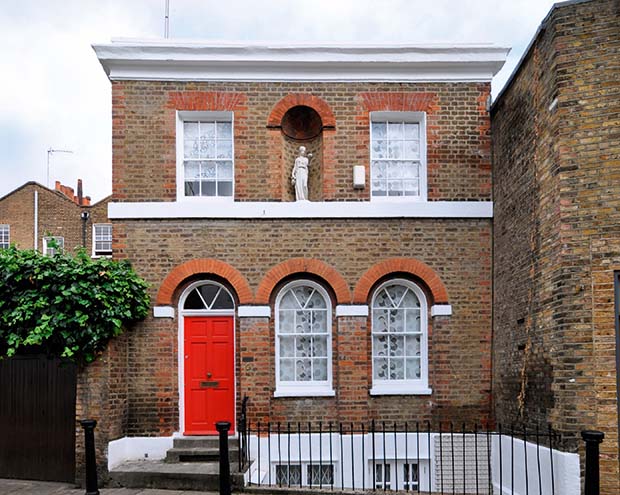 All houses move, and period properties often had shallower foundation than today — check what is causing the movement before packing about underpinning costs

My Walls are Bulging!

Solid walls that bulge outwards or lean, with resulting cracking internally to plasterwork and sticking windows are not unusual and there are a number of possible causes. Leaning tends to be most visible at window and door reveals near roof level.

What do Bulging or Leaning Walls Mean?

Bowing or bulging in old solid walls is often due to ‘jerry building’, whereby the walls were never properly tied into the floor or roof structure in the first place, or were just cheaply built. This is sometimes evident in the side walls of Victorian houses and end terraces, for example.

Solid walls were sometimes built with small embedded ‘bonding timbers’ to tie them together. These timbers can, over time, be prone to rotting and expanding, causing the wall to bulge.

Walls can also bow outwards because they are overloaded, having been built too thin or as a result of botched structural alterations.The most common cause of leaning is from ‘roof spread’ where the rafters push the tops of the main walls outwards if they’re not restrained by collars or ceiling joists. This may have happened because the joists were poorly nailed to the rafters or have rotted.

How to Repair Bulging or Leaning Walls

Before the affected wall section(s) can be repaired – or indeed cut out and rebuilt – the cause of the movement must first be identified and eliminated. You can get an idea what wall repair and underpinning costs below. 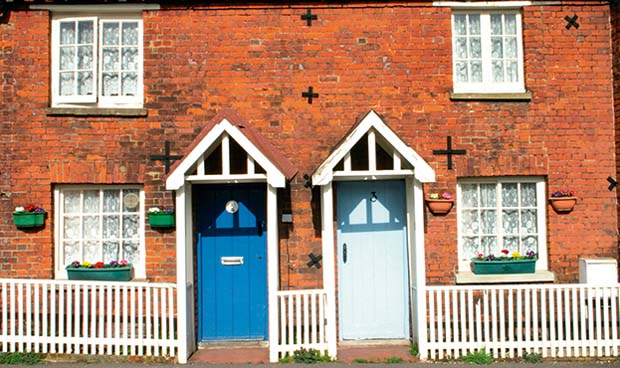 Metal ties are often used to solve the issue of a lack of restraint in wall — S or X iron tie bars were used in the past, as here

What do Cracks in Internal Walls Mean?

Potentially problematic external cracks in masonry, which could allow damp to penetrate, should be addressed before doing anything else.

There are two main kinds of vertical cracking in masonry: those that run straight down through the bricks or stones, and stepped cracks that follow the mortar joints in a zigzag pattern (either tapered or uniform in width). Less commonly, cracks may also run horizontally. Internally, cracks to plasterwork and sticking doors and windows are signs that something is not right, too.

Causes & Implications of Cracks in Walls

Before carrying out repairs, the first step is to identify the cause of the movement. Diagnosing the cause can be difficult, so insurance companies often want to monitor and measure the rate of cracking for at least 12 months in order to diagnose the risk of future movement. This typically involves fitting ‘tell tales’ across the crack. Tell tales are best described as graduated glass microscope slides, screwed in place or secured with epoxy resin adhesive.

Thermal movement:
One of the most common causes of cracking is thermal movement due to adjacent materials expanding and contracting at different rates. This is usually found at the juncture between different materials, such as where old solid brick walls meet blockwork walls. But large stretches of wall made from a single material can also develop thin, vertical thermal movement cracks (hence the need to incorporate vertical movement joints every few metres when building).

Certain materials are especially prone to this form of cracking, such as white calcium silicate bricks (commonly used in the 1960s and ’70s) and reconstituted stone blocks.

Differential movement:
Differential movement is commonly found where new extensions with deeper foundations abut an old house, or when bay windows and porches were built with shallower footings than the main property. Different foundation depths and loadings mean that these will move at a different rate, setting up stresses which in turn lead to cracks.

Water and Rust:
If water penetrates a wall and then freezes, it can, over time, cause metal components to rust and expand. If rainwater gets into a crack and there’s an old steel lintel in the wall which begins to rust, for example, the expansion can force the surrounding brickwork to move.

Similarly, iron cramps embedded within traditional stonework can rust where the protective lead coating has cracked. The rust expansion will ultimately crack the stone it was meant to restrain.

Rust too can be the cause of cavity wall tie failure where ungalvanised ties have corroded and expanded. (This is more common in exposed walls in coastal areas.) The expanded ties can jack up the wall, resulting in horizontal cracks at periodic mortar joints corresponding to the tie positions. This is usually more evident to upper walls.

Doors and Windows:
It is very common to find stepped cracks above openings in cavity walls where the doors or windows have been replaced, too. This is fairly common in properties built from the 1940s to ’70s with no lintels in the outer leaf; the original steel windows were often designed to support the wall loadings. A lack of support during replacement work can cause the wall to drop slightly.

Shallow foundations:
Subsidence is more likely to occur in older properties with shallow foundations on clay subsoil, on slopes, and with trees nearby. Alarm bells should start to ring where cracks extend below damp-proof course level down to the foundations — this may well be the time to begin thinking about underpinning costs and how they may impact your budget.

Other clues are where tapered diagonal cracks increase in width as they go up the building (typically widening in summer and closing during winter), and where you can see ‘mirror image’ cracking visible both inside and out.

Trees:
‘Heave’ is the opposite of subsidence: the ground swells up rather than sinks. It can often occur on clay subsoils typically after the removal of a large nearby tree. The water that would have been absorbed by the roots swamps the ground, and this can then freeze and expand further, pushing the shallow foundations upwards.

Bad Building Work:
Finally, we mustn’t overlook the power of botching. Incompetent builders or faulty materials can cause structural defects — steel beams installed with inadequate support at either end being a prime example.

In any case, both thermal and differential movement need to be addressed. This can be done by forming an expansion joint with a flexible mastic sealant. IYou must notify your local Building Control department in advance of all structural works.

What Does Underpinning Cost?

For more information head over to our guide on repairing brickwork and render. 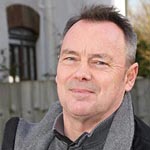