When architect Richard Zinzan moved in with his partner, Chris Storey, he could see the potential in Chris’s 1920s semi-detached home.

Chris had bought the home in the early 1990s and although he found its arrangement of small rooms cosy, it lacked insulation and Richard felt it could benefit from changes to its layout to improve flow.

Over several years, the couple have made vast improvements to the design and energy efficiency of the home. They have increased space and changed the way they live, without having to extend outwards.

As well as improving the fabric of the building, the main focus was opening up the ground floor and reworking the existing layout. As an architect, Richard had great ideas about how to make better use of the space, but Chris needed some convincing. 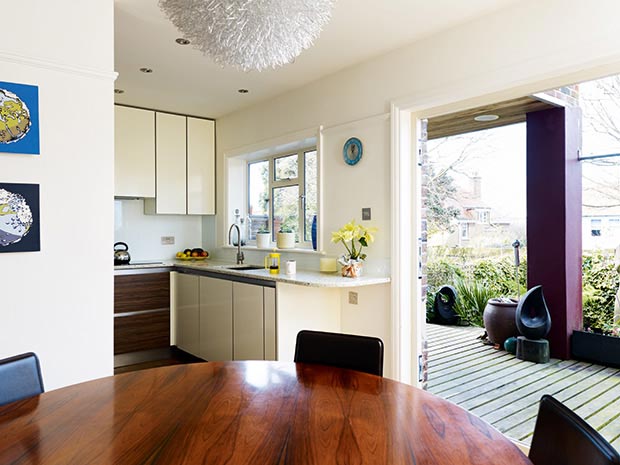 Richard also factored storage into the remodel of the living space and created a stud partition to be built across one wall with a recess for a cupboard and an alcove for their TV. This helps provide acoustic protection from the neighbours.

The dining area adjoining the lounge now has a folding sliding door which opens out onto the garden. This brings in light and creates easy access to the terrace outside. The kitchen footprint has remained much the same, but with a new U-shaped layout, built in appliance and floor-to-ceiling cupboards, the space if being used more efficiently.

The couple were keen to find space for a second bathroom. Having added a loft conversion some years before and creating a fourth bedroom, the house would benefit from this extra room.

By knocking down walls and creating an open plan space, they no longer needed the door from the hallway to the kitchen, so were able to utilise space under the stairs in front of where this door had been. The new room is small, but they fixed a showerhead to the ceiling and lowered the floor to create a wetroom without the risk of water escape. Glass cladding to the whole room means that it is waterproof and easy to wipe down. 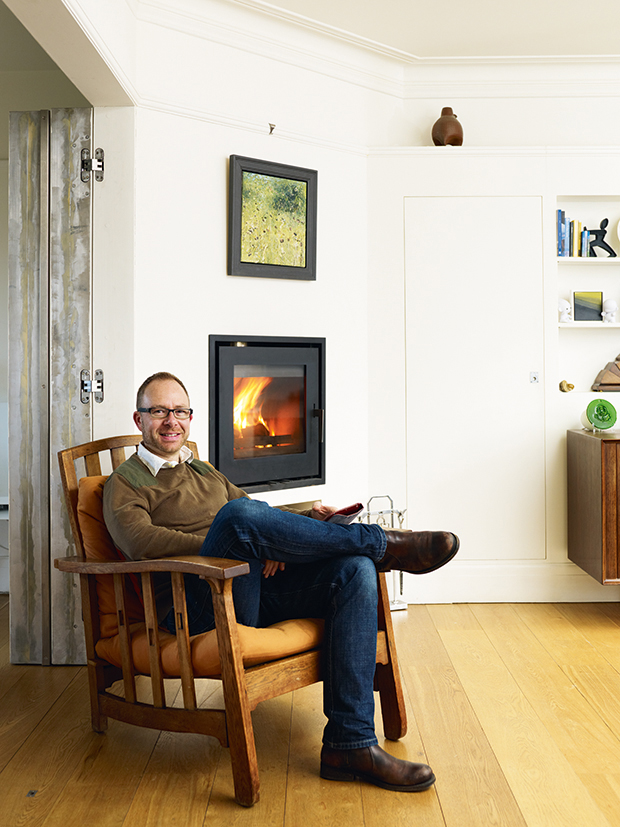 Richard designed the folding wall to fit in the exact space were the old wall between the living and dining rooms had been. It is made from a light aluminium frame clad in painted aluminium sheets from Didafab

The renovation project provided the perfect opportunity to add insulation to the building. Rigid panels of Celotex polyisocyanurate (PIR) and double-glazed windows have greatly improved the thermal efficiency of Chris and Richard’s home.

They also specified photovoltaic (PV) panels for the roof and these are connected to an invertor stored in small storage room. When there isn’t enough solar energy, the system automatically switches to Grid electricity. Payment for the electricity bills are then covered by the Feed-in-Tariff which is paid for the generation of renewable electricity.

To heat their home, they have underfloor heating downstairs and a woodburner in the lounge.

The final push to finish the project came in 2012. It took a while, but they took their time to save money up for the best quality possible, giving them the finish and low running costs they wanted.