Having lived in the wing of a converted Victorian convent in Surrey for 16 years, Ros and Mike Sayers wanted to find a home for their retirement. When Mike left his IT job in London, they decided to find a home by the coast and viewed several properties.

Their search turned to the Isle of Wight where a renovation opportunity became a new build. Carefully coordinated planning and design has resulted in a stunning oak frame self build, with excellent levels of airtightness, and an arsenal of renewable technology.

Ros and Mike fell in love with the first property they saw on the Isle of Wight — a run-down 1960s bungalow with little appeal in itself, but 1.5 acres of land, woodland on two sides and views across the countryside and out to sea. It became their holiday home for the next three years as they decided what to do with it. 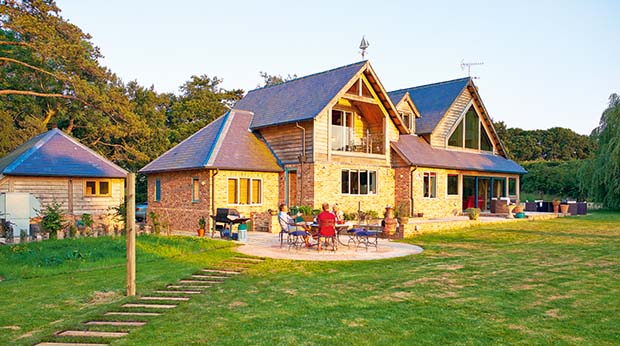 Thanks to a detailed build schedule, the Sayers have been able to create their ideal retirement home with little of the stress usually associated with such a big project

Initially, they planned to renovate the tired bungalow, but after a visit to the Oakwrights stand at Homebuilding & Renovating show in Birmingham, they thought an oak frame self build would suit the plot. They stayed the night at the Oakwrights show home in Herefordshire, giving them a chance to be inspired and test out underfloor heating and the heat recovery system.

The conceptual stage of the project began in 2009. They invited Darren Blackwell, an Oakwrights design partner, to the island to discuss their vision. High vaulted ceilings and glazing were important to give a good feel of space, light, and make the most of the views. They also wanted their home to be energy efficient.

Local planning policy only allowed for a 35 percent volume increase on the existing home. As it was a modest, single storey bungalow, this could have been difficult, but the old property made no use of the loft space. Darren knew that by incorporating rooms in the roof, he could make the most of the available footprint.

Detailed conceptual drawings were prepared and a pre-application meeting was arranged with a planning officer from the Isle of Wight Council. He was enthusiastic about the scheme so a detailed planning application was made, and permission granted for a replacement dwelling with a detached outbuilding in May 2010. 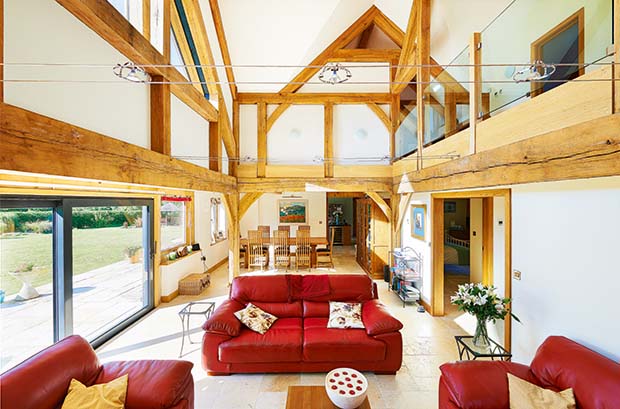 The light-filled living space is overlooked by a galleried landing glass balustrade, which gives a feel of unhindered space

The Sayers, Oakwrights, Building Control and the Contractors spent many hours of discussion finalising the design. With this, they created a design with both modern and traditional elements, which looks at home on the site.

The oak frame is exposed throughout the inside of the home, with some structural features also picked out on the outside. The rest of the home is clad in a combination of stock-faced brickwork and horizontal oak boarding, finished with a Welsh slate roof.

Inside, they have embraced an open plan design, with a large living space overlooked by a galleried landing, and vaulted ceilings. Full-height glazed sections aid the flow of natural light and ensure the beautiful views are accessible.

There are three ground floor bedrooms, then a large master suite upstairs and a snug/library with a covered balcony. The interior design is a modern take on country style.

As well as a build system which allows for high levels of air tightness, the Sayers have ensured what little heat and power they need comes from a renewable source. So, they have specified:

Underfloor heating is their chosen heat emitter. They also have a rainwater harvesting system, and efficient LED lighting which Ros researched and designed using Google SketchUp. 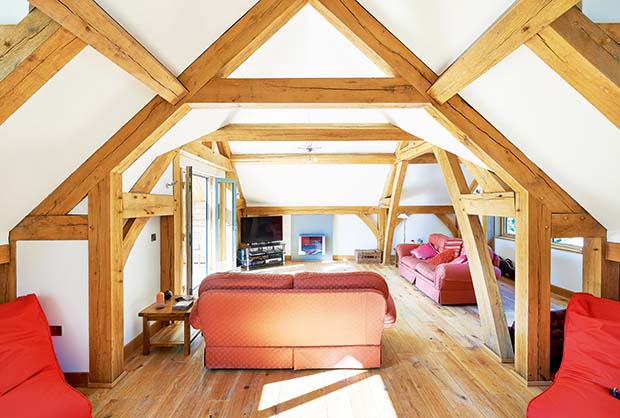 Once planning permission was in place a project consultant was appointed and following preparation of a schedule of works, a building company on the island was selected as the main contractor.

The first job was to remove and preserve plants and shrubs to be later replanted. With this done, the old bungalow was demolished and seven-metre-deep piled foundations laid in the clay ground.

The oak frame was delivered and constructed in three weeks in the summer of 2011. To keep to a short build timescale, the couple chose to enclose their oak frame with Oakwrights’ own WrightWall Light system of large-format panels. These are manufactured off-site and fit together to create a shell ready to be made airtight.

Due to meticulous planning, the build was actually completed a couple of months ahead of schedule — and to a superior standard of finish. The success of the project not only comes in the form of testament from Ros and Mike who love living in their bright spacious home, but it was also awarded an LABC regional award and was highly commended in the 2013 national awards.