Looking at Richard Bancroft’s small but perfectly formed coach house conversion, it’s hard to imagine the building serving any other purpose than that of an unusually characterful domestic dwelling.

Yet when Richard bought the old coach house, he intended it to be put to use as garages for the two apartments he had developed at the other end of the site.

However, his architect suggested they instead developed the coach house into a detached dwelling.

He applied for planning permission, initially securing it for a one bedroom house, comprising both a one storey and a two storey section. After the builders suggested extending the roofline for £11,000-£12,000 to create another bedroom, Richard reapplied with this design

Converting in a Conservation Area

While the coach house isn’t listed, it is in a Conservation Area, and Harrogate Council, says Richard, is notoriously strict. Nevertheless, permission came through with just a couple of minor changes — there was an outside toilet on the site which had to remain intact as it added amenity value, and has been used for storage space.

Richard originally applied for four rooflights in each bedroom, but after negotiation reduced them to three, offset in a triangle to meet planning approval.

Another matter stipulated as a result of the building sitting within a Conservation Area, was that the house had to have timber windows.

Being an existing building the layout was fairly restricted, and there was little room to extend sideways, but in terms of the design elements there was plenty of scope for originality.

Unfortunately, the builder who had developed the apartments retired after the build, so Richard had to find a new one. “We put the project out to tender on myhammer.co.uk and a guy came over from Manchester and showed me a house he’d worked on just down the road from where I was.” He was duly appointed as the main contractor and brought all of his trades in, but Richard was on site every day to project manage and oversee the build.

The roof had to come off and the structurally unsound brickwork was stripped right back to just below the ground floor windows. The brick walls were then built back up, with new lintels above window and doors openings and a new roof added.

There were no services on site, so these had to be brought in. A metal framework was constructed around the inside of the property to contain all of the services and insulation; it’s hidden behind plasterboard. 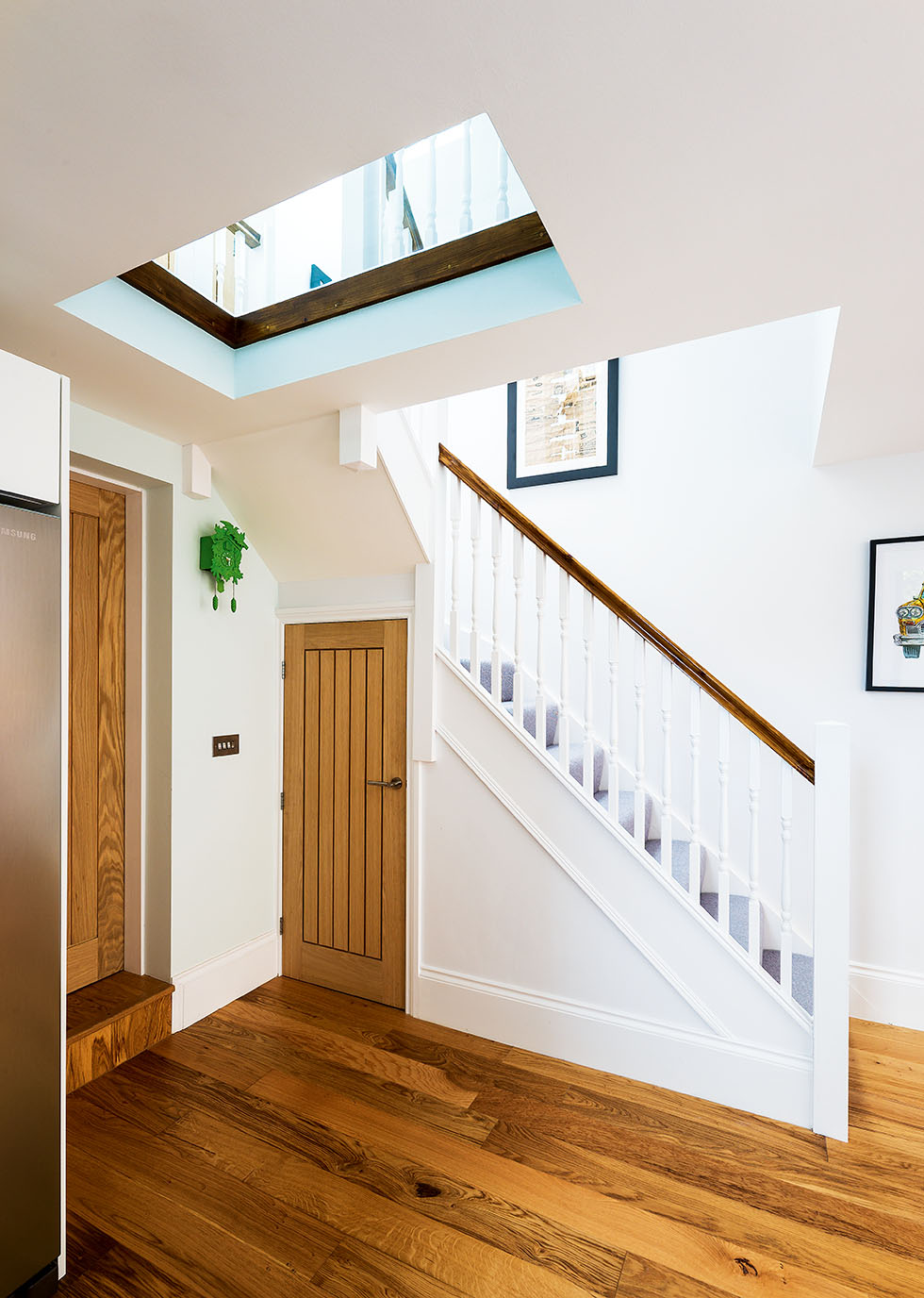 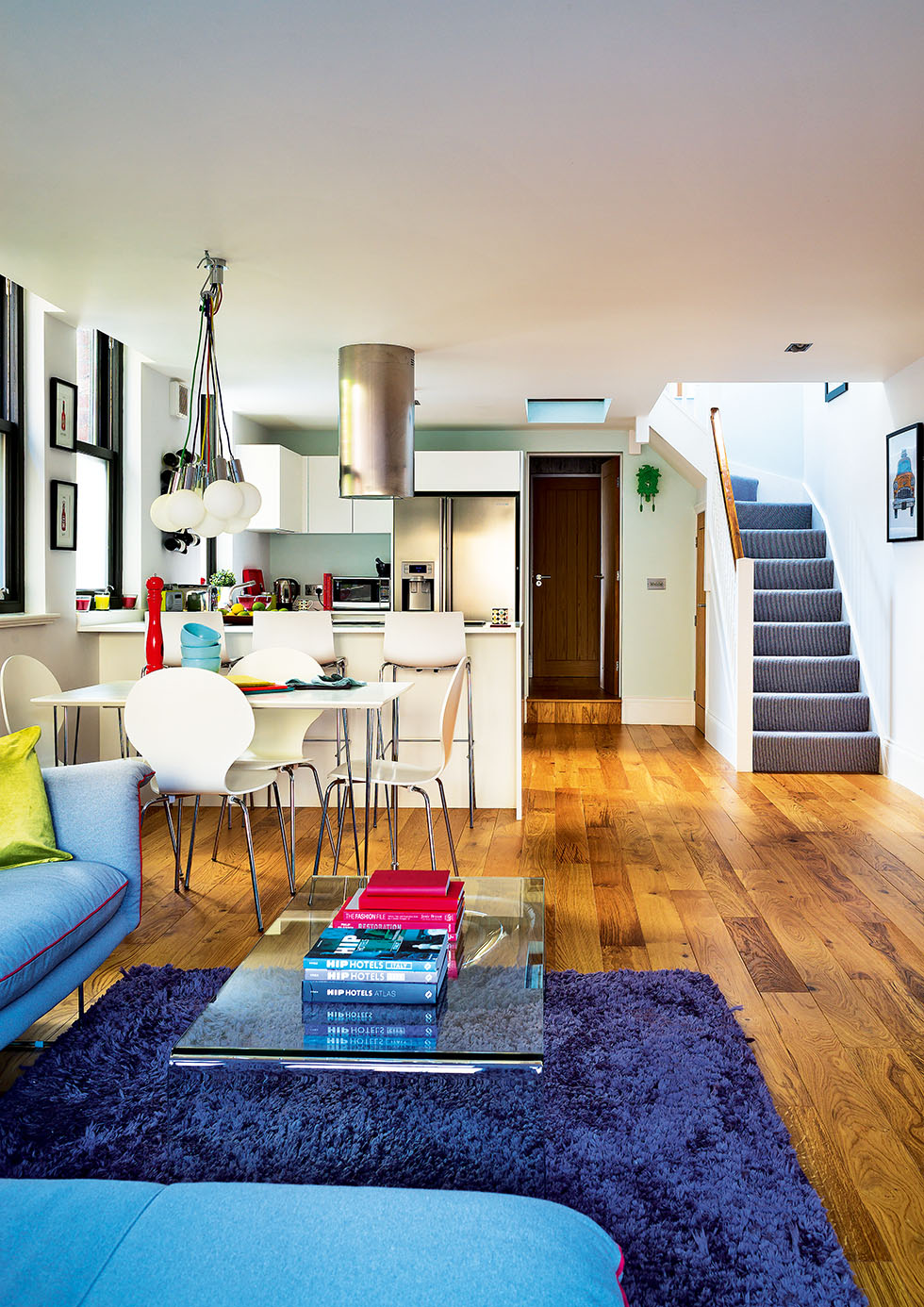 A real entertainers’ haven, the kitchen/dining/family space is all open plan to the hallway, allowing guests to immediately enter the hub of the home — and also eliminating the need for a dark, cramped hallway 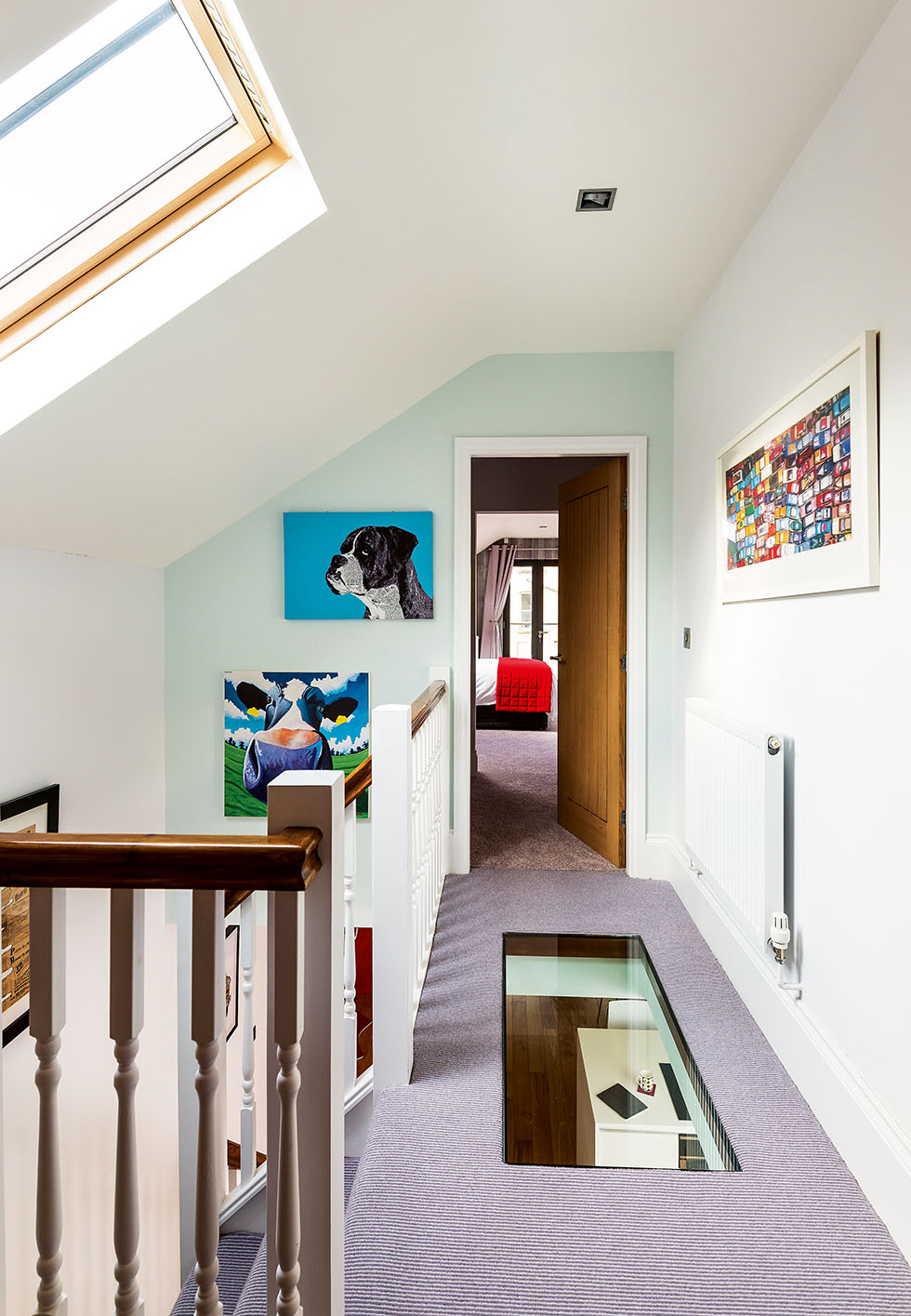 The new glass floor – or ceiling, depending on your point of view – hadn’t featured on Richard’s original plans. Originally, the plan was to have a glass staircase, but the cost of putting one in was too expensive and so he opted for the glass floor to act as a feature, but also to let more light into the kitchen 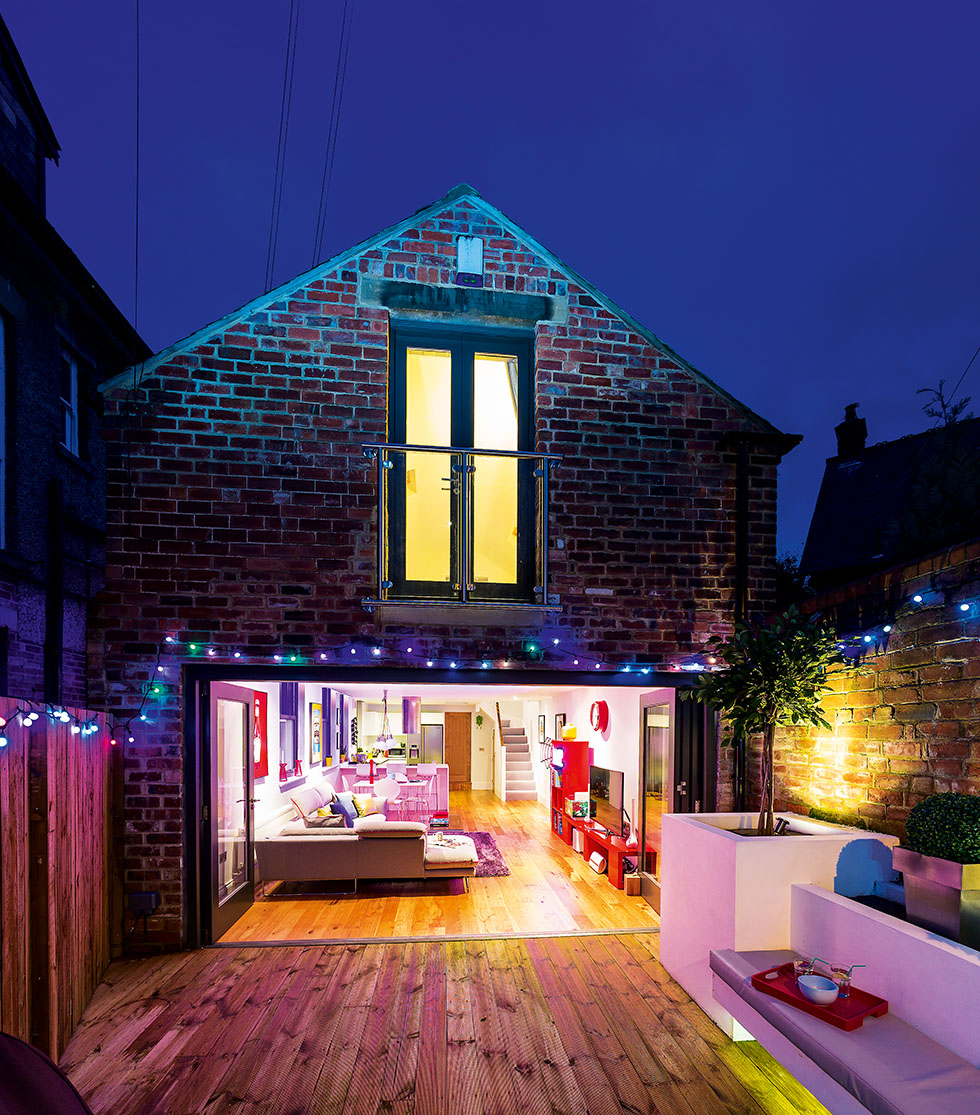 An outdoor decked terrace accessed through bi-fold doors offers entertaining space, with steps down to the old outside toilet and the back gate 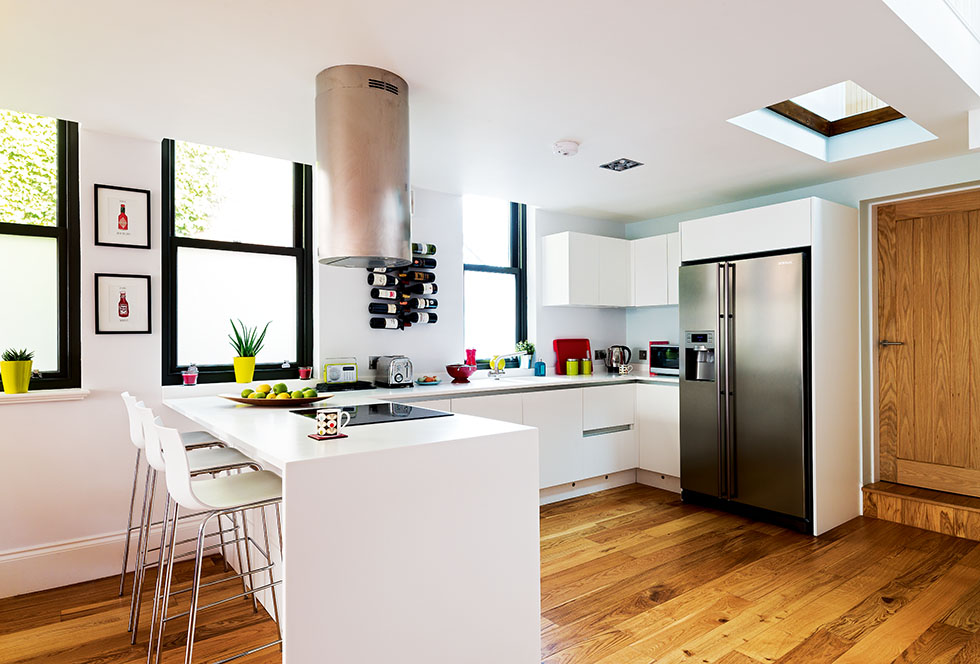 A Magnet kitchen is cleverly zoned in the large space thanks to its U shape, while wood flooring has been laid throughout 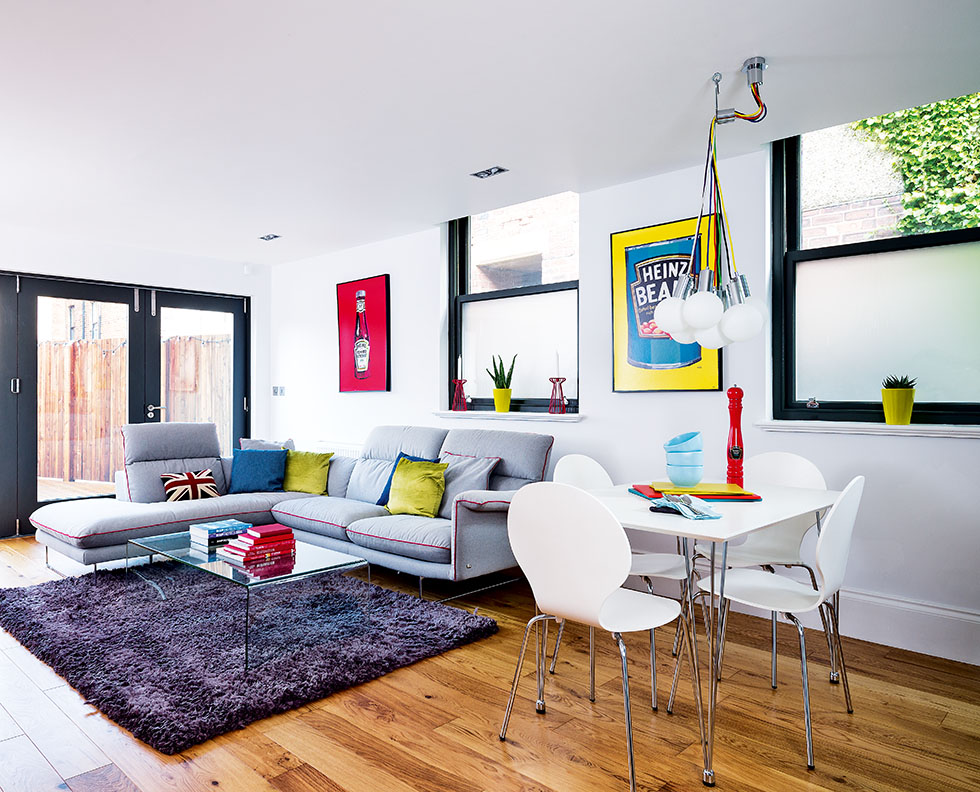 The feature pendant light above the dining table is from Rasmus 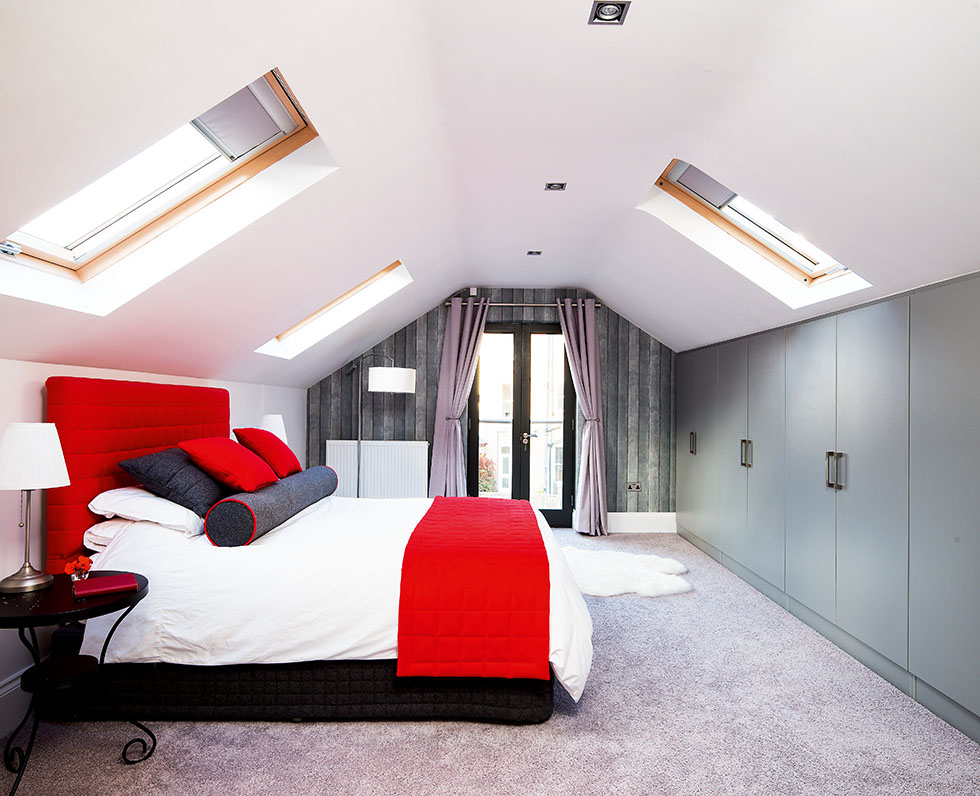 Richard’s favourite room in the home, the master bedroom features a Juliette balcony and luxury en suite (below) clad in grey porcelain tiles from Atlas Tiles, supplied by Abacus Direct 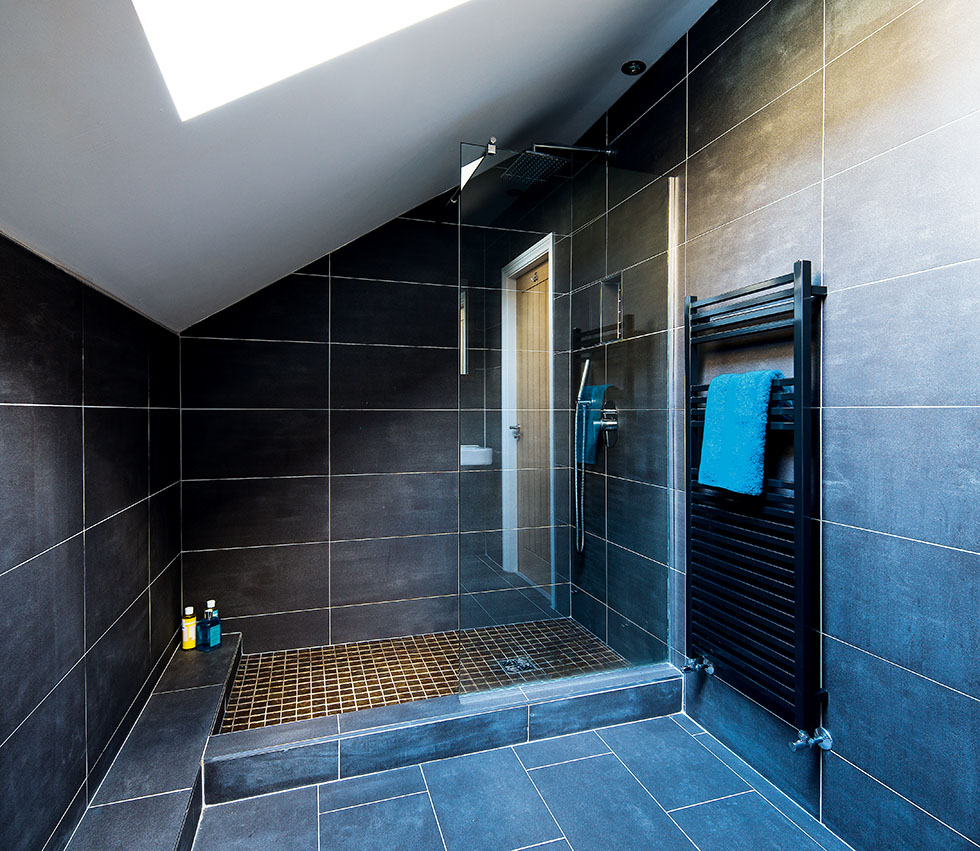 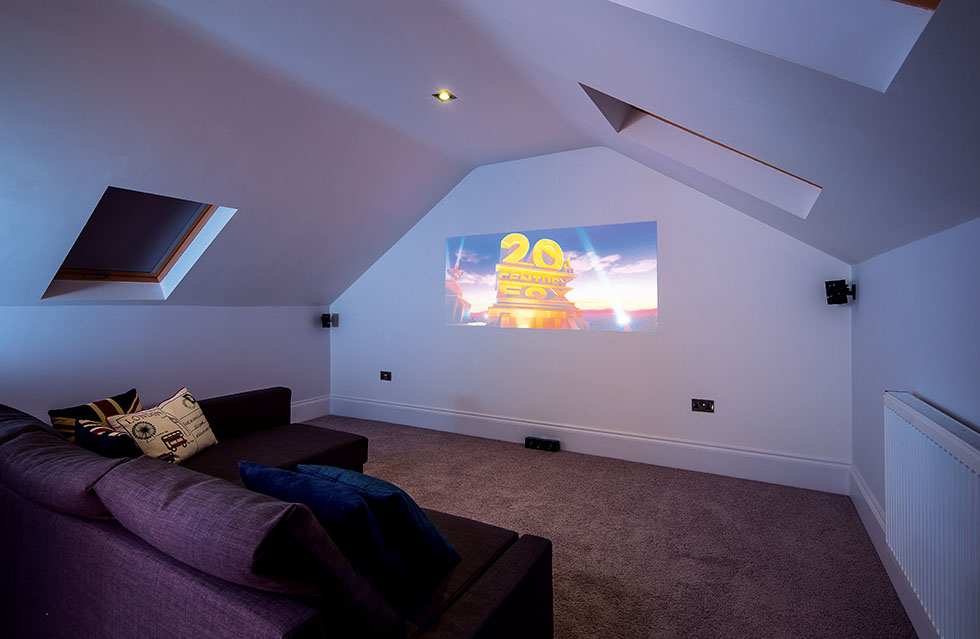 “Once every six weeks we might have someone to stay, so we decided to make it a dual purpose room and have a home cinema — it was so cheap to put in too. For the wiring, sound system and the projector, it cost us about £1,500 and the quality is incredible,” says Richard 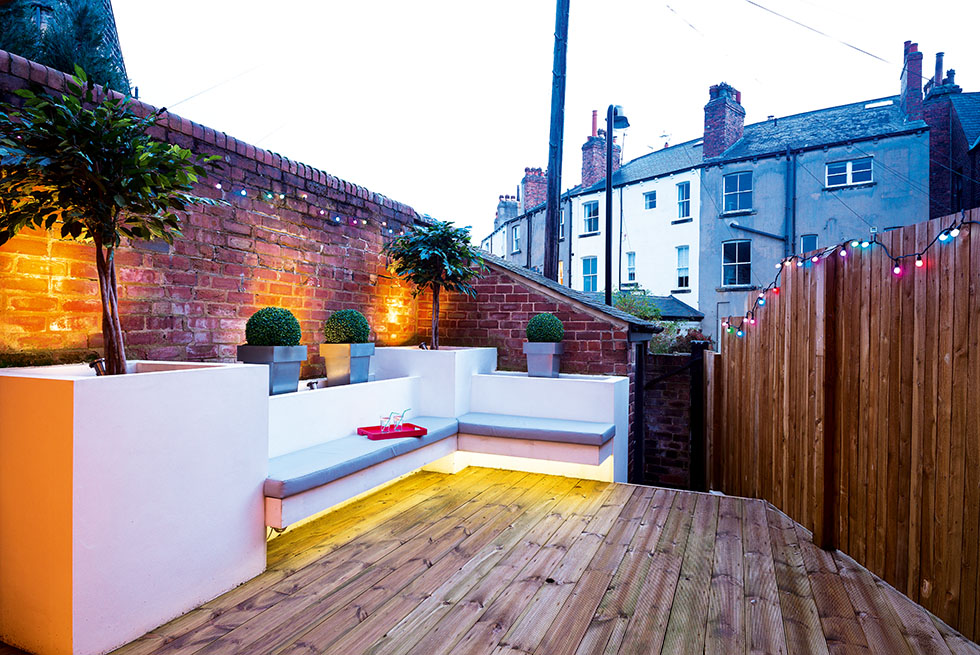 Fake trees and plants from Costco allow for a low-maintenance garden, and tube lighting beneath the outdoor bench adds a soft glow in the evenings