“We fell into building our own house by accident — twice over,” says Alexa Ergatoudis. “We’d planned to renovate a traditional dormer bungalow, but so little of the building would have been left standing that we eventually replaced it with a new build Georgian-style house instead. It was larger than we needed, so we decided to move on and find a renovation project, but when an estate agent pointed us in the direction of this plot, we couldn’t turn it down.”

Alexa immediately made a successful offer for the plot, even before her husband George had seen it, as she could envisage exactly the type of house which would suit the narrow infill strip of land. After project managing the first build she was comfortable with the idea of tackling a self build project, and began gathering together ideas for a four bedroom home with interiors reminiscent of an urban loft.

“The plot stands in a Conservation Area so I knew there would be restrictions, but planning permission had already been granted for the site, so it was a case of designing something we liked which the planners would approve of,” says Alexa, a digital design lecturer who has recently launched a bespoke soft furnishings company. “We engaged an architect and devised a three storey design, which meant that the plot needed to be extensively excavated to lower the roof height to match the adjacent cottages.”

Three planning applications were made before the self-build design was finally approved, mainly due to the glazed element to the rear, which was originally planned as a two storey structure but later reduced to a single storey. 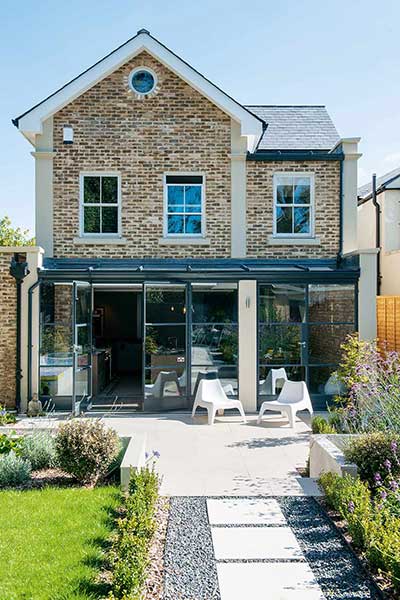 Alexa and George chose to use the same building contractor who worked on their previous self-build, and once again Alexa took a prominent role when it came to selecting materials, liaising with the builder and overseeing the project. “Two days into the build our neighbours contacted us to say they hadn’t signed a party wall agreement, but we quickly sorted this out,” says Alexa. “It was one of those things which had been overlooked because everyone assumed that someone else was dealing with it.”

The main shell of the house was built in a combination of blockwork, bricks and structural steelwork, with a natural slate roof. Windows are a composite of timber and aluminium, with bespoke steel-framed double glazing chosen for the rear single storey element. 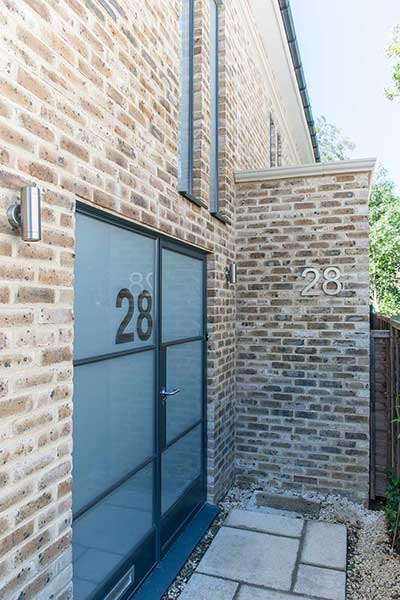 Although Alexa and George originally had their hearts set on London stock bricks, due to a shortage at the time, they settled on Ibstock’s Cooksbridge Yellow Clamp stock brick instead 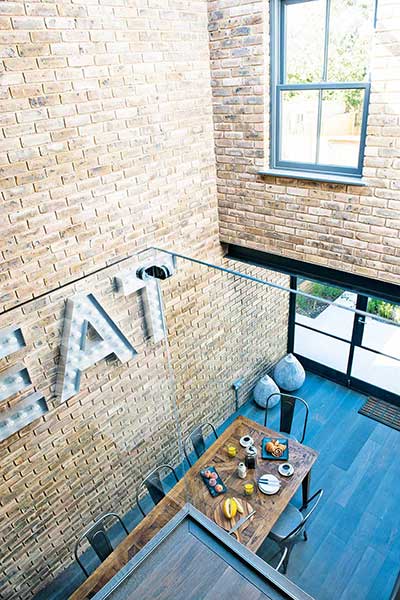 The stunning double-height void above the kitchen space, coupled with the master suite on the third floor, meant that a sprinkler system was required in order to meet Building Regulations 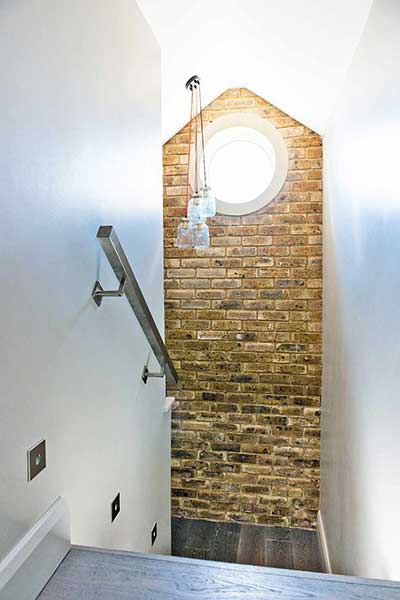 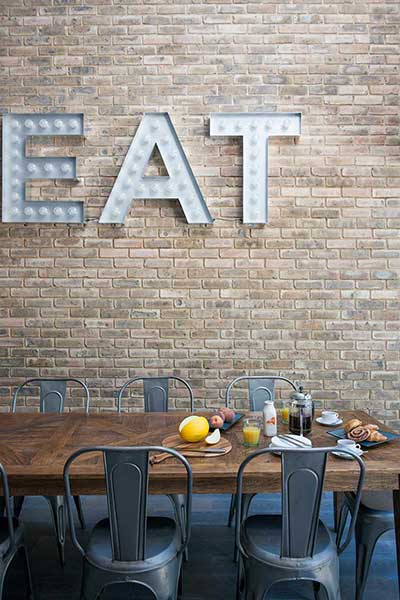 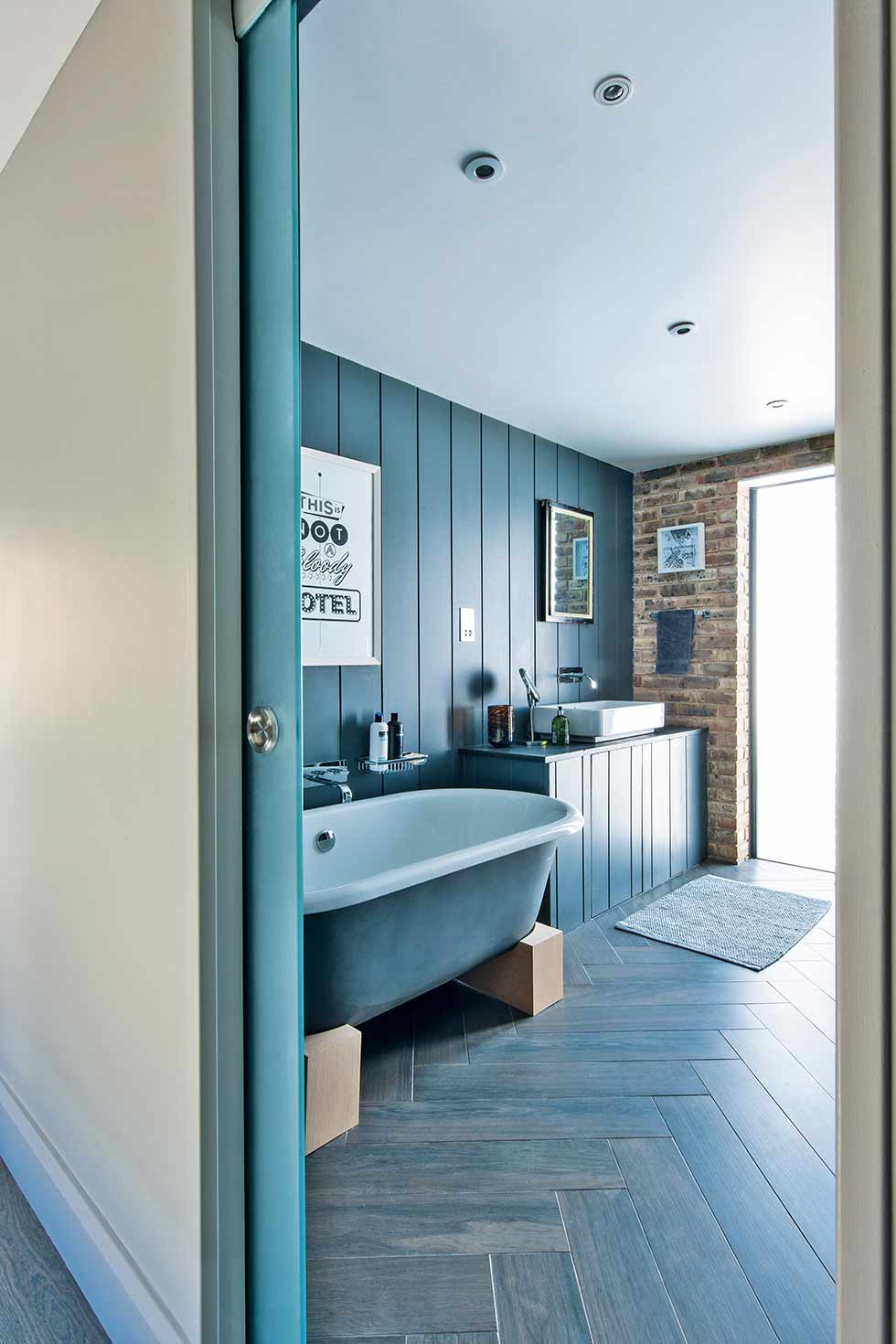 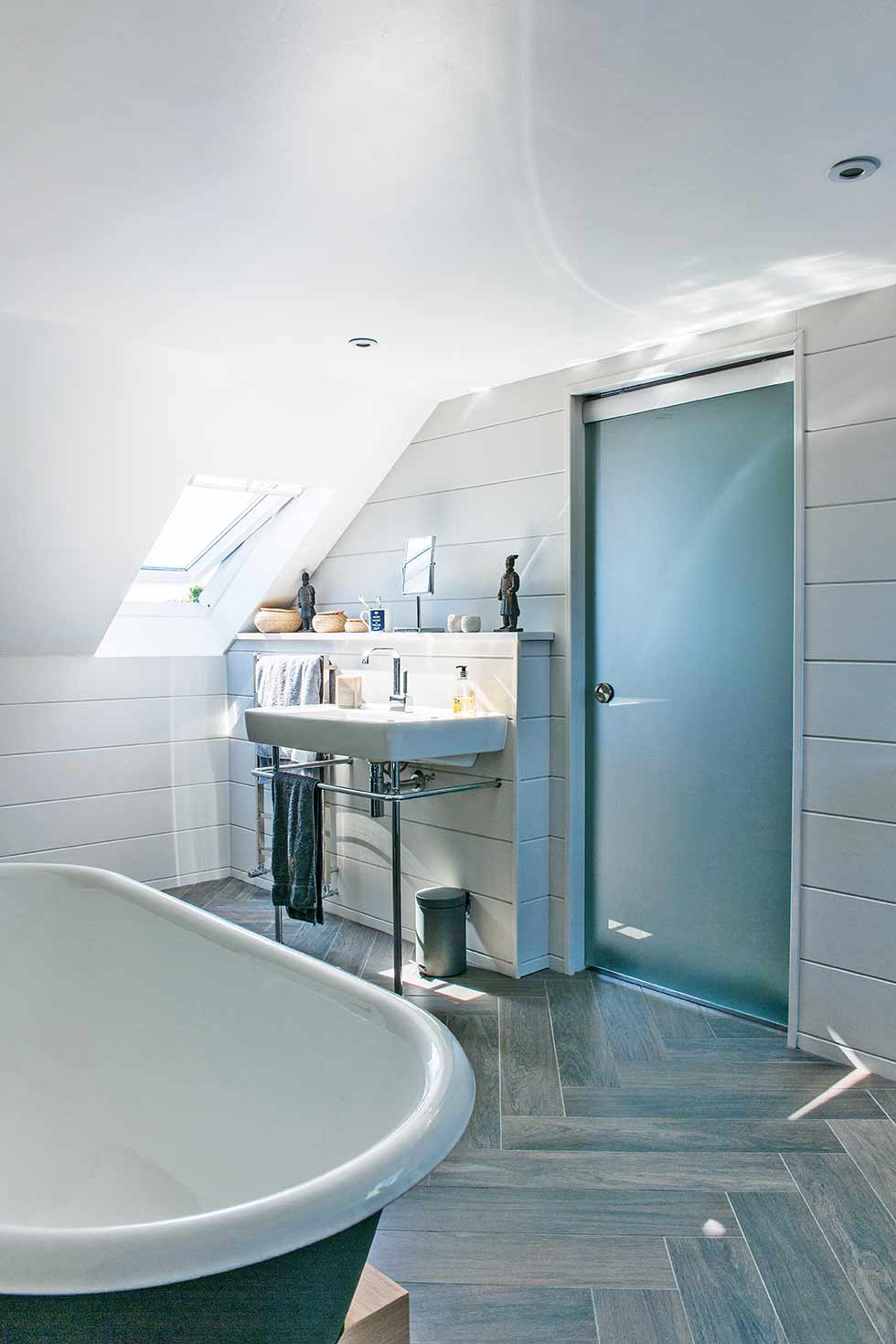 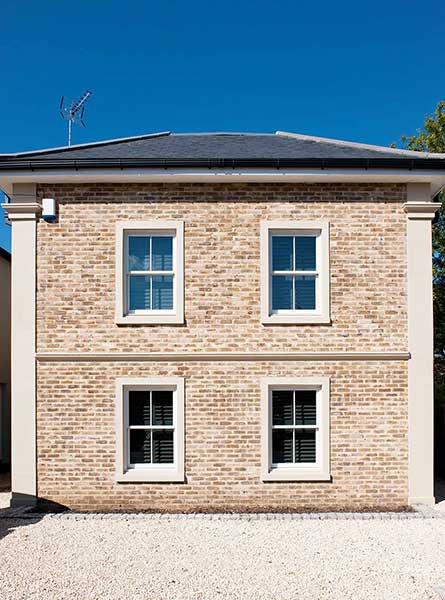 Externally, the self build house has been constructed in a traditional manner, with brick walls, a slate roof and sash-style windows framed with stone-effect surrounds 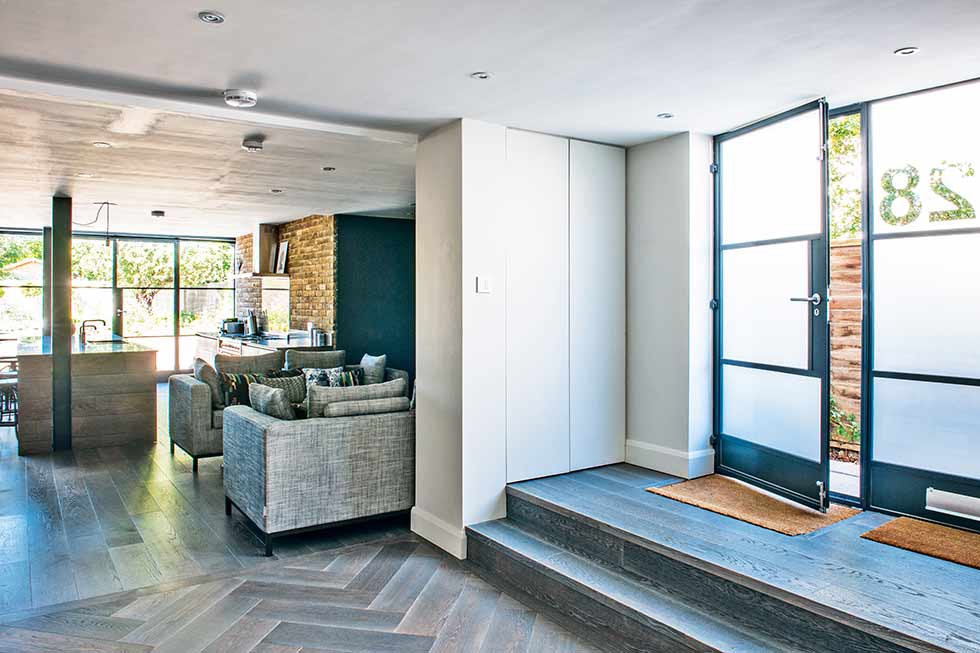 Grey oak flooring, laid throughout the house over underfloor heating, has been laid in a chevron pattern in the entrance hall, defining this area 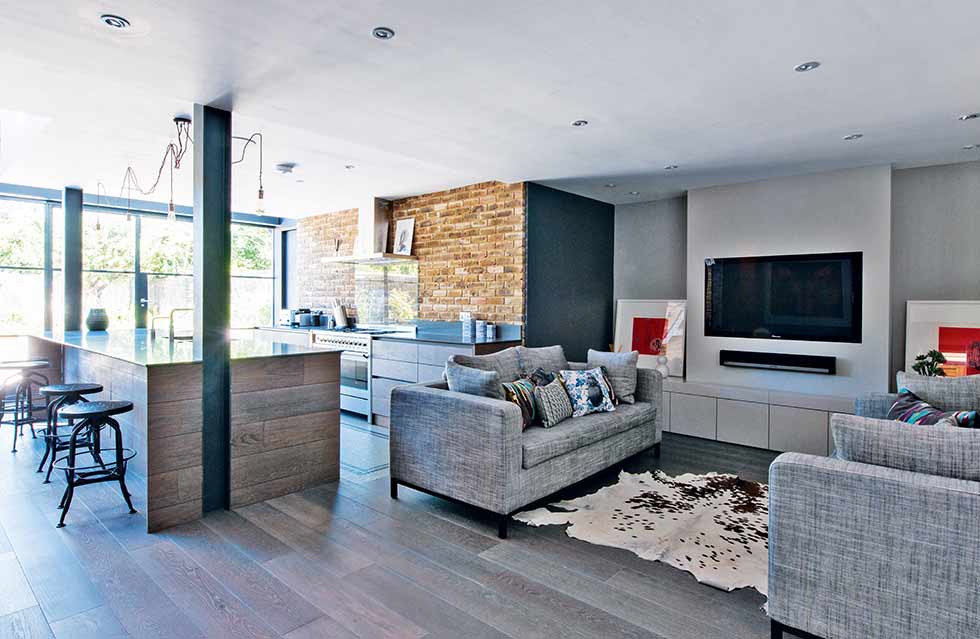 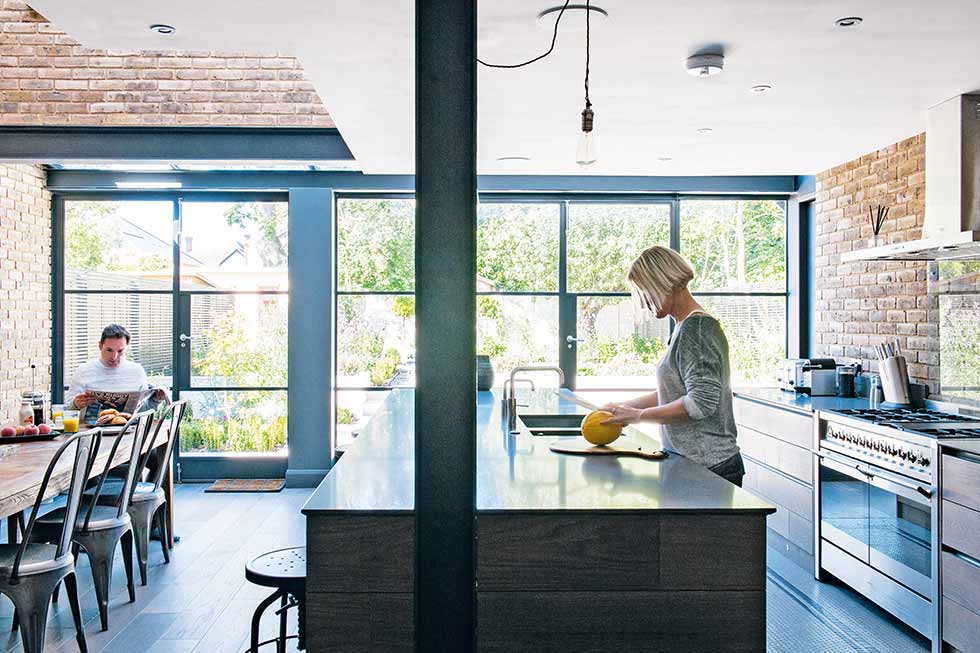 The rear of the house features a single storey glazed element, with steel-framed doors, which open on to the patio and draw light into the open plan kitchen/dining/living space 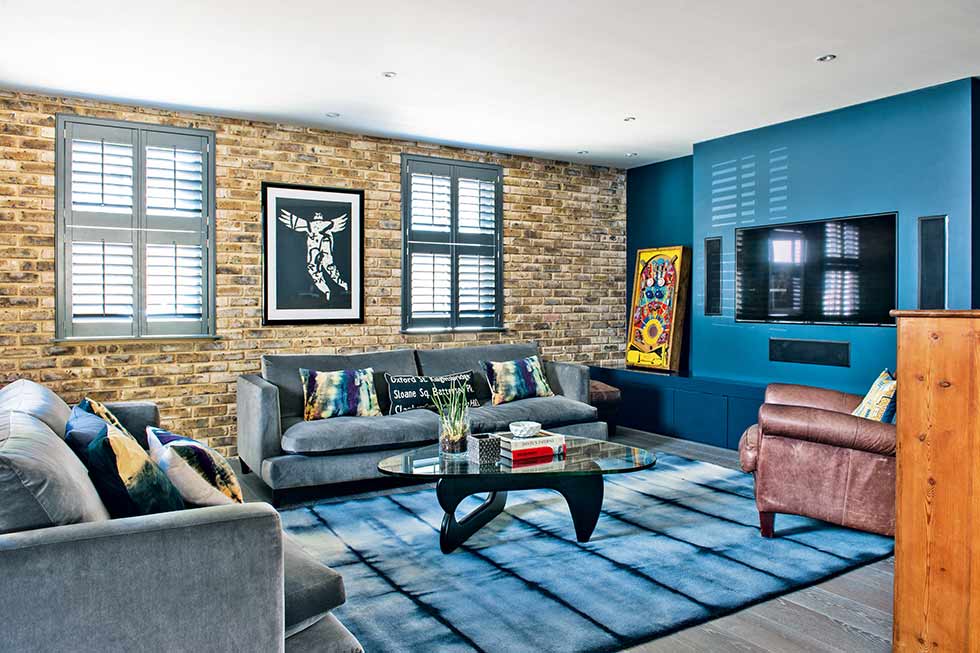 A separate living area with sliding doors ensures that the family have enough space to spread out. Grey timber shutters and exposed brickwork continue the urban loft theme 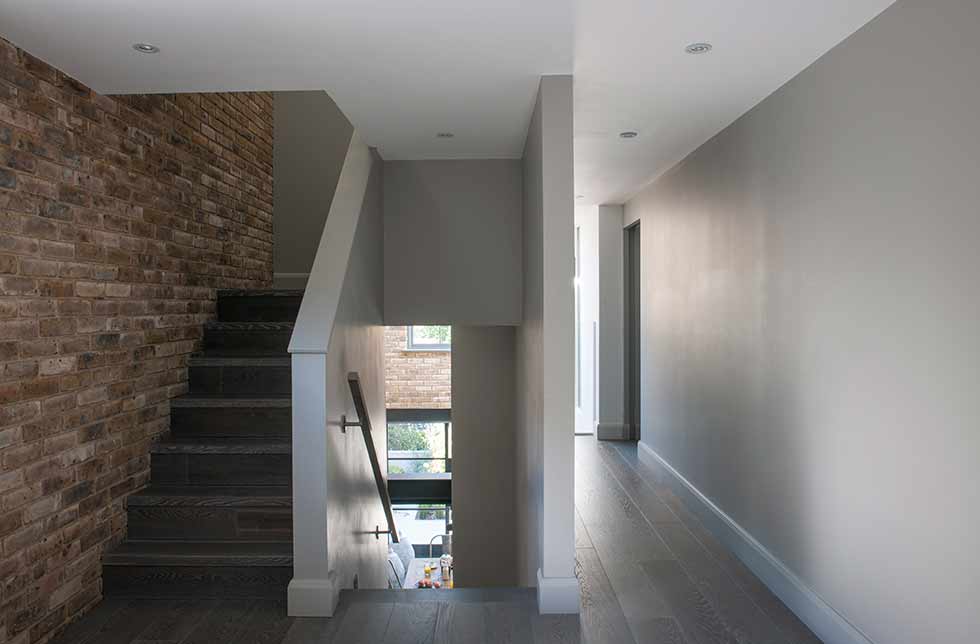 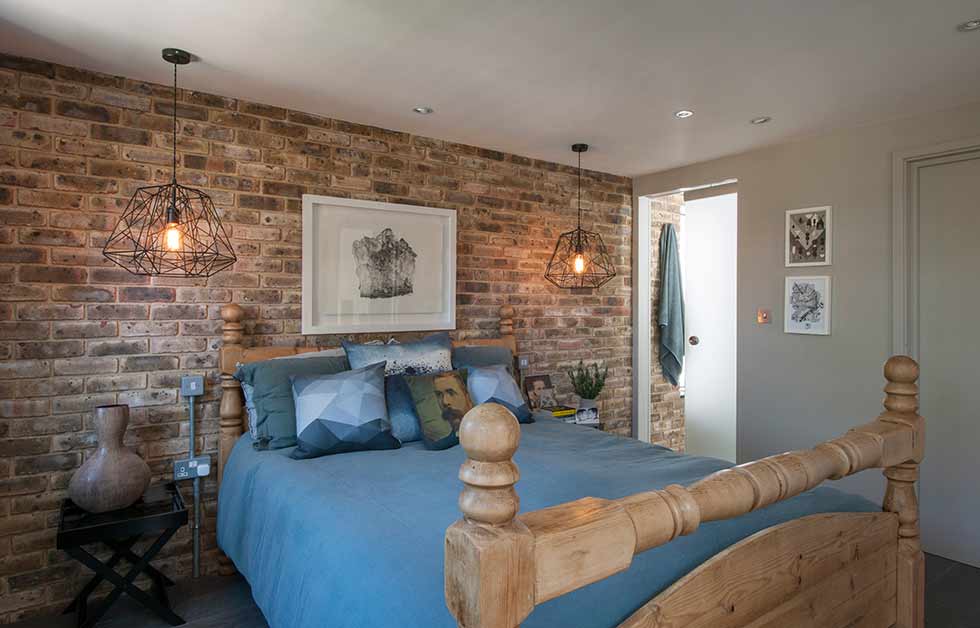