Celia Brackenridge and Diana Woodward had renovated homes before, but had always liked the idea of self build. When they came upon a one-acre site on a secluded road in Hertfordshire, they took advantage of this chance to build their own home.

The finished product (which was shortlisted in the Homebuilding & Renovating Awards 2013) is a super insulated and highly energy efficient home, with flexible living space and light-filled interiors. What’s more, the innovative design meant that it took just six months to construct, allowing them to move in and finish fitting it out themselves.

The Hertfordshire site is on what is known as Plotlands territory. In the interwar years, city-dwellers were encouraged to move to countryside plots like this in the Midlands and South East. The plots had been made available due to declining levels of agriculture and operated outside of planning policy, so people built their homes here.

Planners generally do not encourage their redevelopment, but Diana and Celia’s site in an Area of Outstanding Natural Beauty deserved better than the existing small bungalow that stood on it. The rest of the road had gradually been redeveloped and traditionally styled new homes now stand in place of the ageing bungalows. 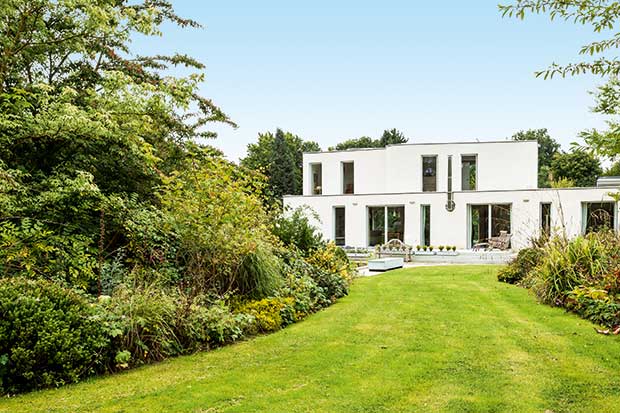 Diana and Celia had come across design and build company Facit Homes, who offer unique homes as part of their package service. This suited their want for a modern home with light spacious interiors; an efficient and smart build system which would minimise construction drag; and the benefits of Facit’s package service which would take care of the design and build of the external structure with minimum risk but maximum quality.

In terms of room requirements, their main priority was creating a special living space, suited to their lifestyle. This lead them to steal space for their kitchen/living room, rather than put in additional rooms for the sake of it.

Fearing their contemporary flat roofed scheme would not be deemed to match the local vernacular, Diana and Celia used the services of a planning consultant. Fortunately, their scheme sailed through, although it was given a 200m² limit. 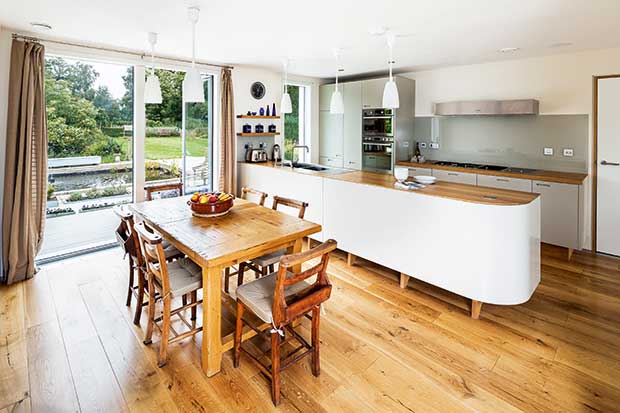 The build is made up of hollow boxes made from engineered plywood which are purpose-manufactured on site. After being filled with insulation and covered with wood wool board panels, the cuboidal structure was finished with lime and a render made from recycled glass.

The sleek exterior has been enhanced with timber cladding and matching sun-deflecting louvres which provide shade for the large windows. These square windows are full height and dominate much of the front elevation for a highly contemporary look. To the rear, more windows – this time narrow rectangles – punctuate the off-white render.

Inside, there are two large en suite bedrooms upstairs, and two study spaces downstairs with sofa beds for guests downstairs. The rest of the ground floor is occupied by a large open plan kitchen diner with adjoining utility room, and a sizeable lounge with doors out onto the garden.

The build system is designed to be highly energy efficient and have a low environmental impact. The plywood panels are cut by a computer driven router and this precision means there is very little waste on site.

The structure is stuffed with insulation, in this case blown-in Warmcel which is made from recycled newspaper. The home was also fitted with triple-glazed windows, and as a result of focusing on the structure it is both incredibly airtight with wall U values of just 0.14.

The home has a mechanical ventilation and heat recovery system due to its levels of airtightness. The total heat requirement for the house is just 4kW and the heat is provided by a plastic pipe dropped into trenches on the perimeter of the main rooms. Radiators have been installed as a back-up but are rarely used.

Electricity and hot water are provided by solar panels on the roof. The photovoltaic panels generate £980 income from the Feed-in-Tariffs scheme, covering much of their annual energy bill. In 2012 their net expenditure for energy was just £42. 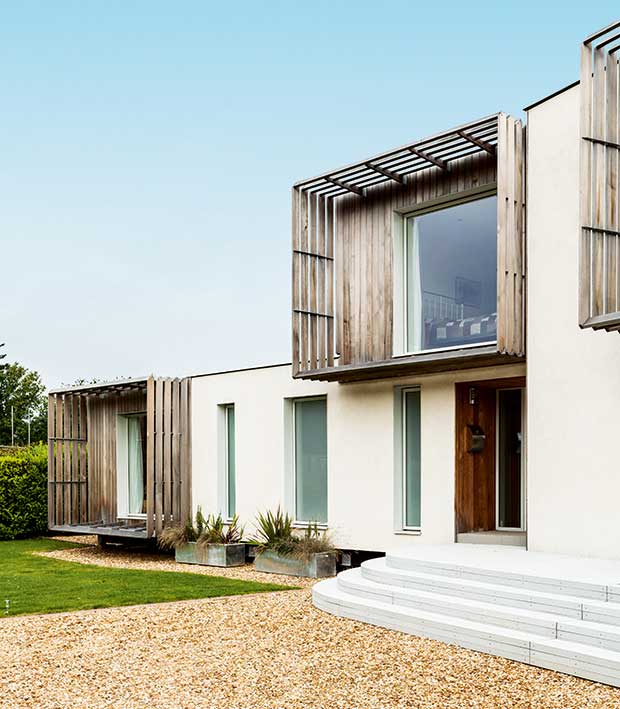 As the house was constructed using a dry technique – stages of which took place offsite – it was incredibly quick. The designs were drawn up, and the plywood panels cut offsite. Meanwhile the foundations, consisting of 34 strong and quick-to-build screw piles, were put in place. These support the structure which is a hybrid of plywood boxes and suspended steel I-beams.

The build, managed by Bruce from Facit Homes, started on site in May 2011 and by November the house was weathertight. At this point Celia and Diana moved in and were able to manage the fitting out of the interiors themselves. They spent time shopping around online for various features which saved them money, but gave them a high spec finish.

They are very pleased with their new home and found the progressive construction method allowed for a stress-free process which was both highly customisable, but predictable. It came in on time and on budget and gives them the peace of mind of low running costs for the future.