How Much can you Save by Taking the DIY Route? | Homebuilding & Renovating Skip to content

How much can you save by taking on DIY? In most instances, those of us keen to get stuck in to elements of our own building project will have to pick and choose the most effective parts of the project to carry out. In addition, of course, our own skills, and the Building Regulations, will dictate what we can and can’t realistically take on.

First things first — let’s be clear that every project is different and, when analysing build costs, individual designs and specification choices are likely to play a major part. So one person’s window costs aren’t going to be the same as someone else’s.

DIY is not for everyone, but taking on the responsibility for labour can result in a significant saving. In many instances, the day-to-day work on a building site is semi-skilled rather than highly skilled (with some significant exceptions) and much of it is not beyond the wit of the enthusiast with a bit of determination and a good internet connection (in addition to plenty of how-tos on here, websites like DIY Doctor provide a very useful resource).

It’s fair to say that the inexperienced DIYer, fitting plasterboard for the first time, is likely to be slower than the experienced installer. However, it’s also fair to say that, particularly for those semi- and unskilled jobs, the care and attention taken by the DIYer who has to live with the end results is sometimes likely to be higher than the relatively low-paid labourer.

Self-builders and home renovators who have taken on significant amounts of DIY talk about savings of £10,000s. We have profiled a self-builder who claimed to have saved around £80,000; one Staffordshire self-builder we talked to in late 2015 estimated their total savings through carrying out almost all the work themselves (at evenings, weekends and time off work) had crept into six figures.

A larger building project is nothing more than a collection of its constituent parts. For the purposes of this exercise, we have based our figures on a detailed estimate of the costs for a notional large extension and remodelling scheme (estimate supplied by Estimators Limited). The total estimate for the whole project mentioned in our sample was £211,000, comprising £95,000 labour (45%) and £116,000 on materials (55%).

Research by Homebuilding & Renovating of other projects shows that this is within the range of findings, with labour typically accounting for between 45-60% of total costs but the average actually being in the 50-55% range. The critical point being that the overall split will depend massively on the specification (expensive products generally cost the same to install as cheaper ones), the type of project (complicated or overly bespoke designs tend to increase materials costs disproportionately) and of course the build route.

This analysis of split prices for various typical component packages of a domestic building project show the significant differences in how they comprise of labour and materials. Typically the later internal trades tend to be more labour intensive. 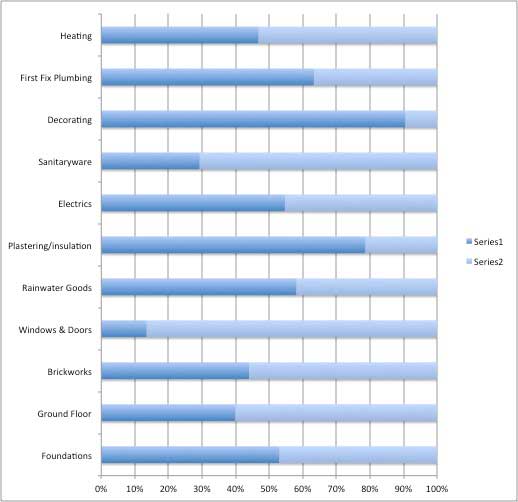 The key to working out which elements would benefit from your greater involvement depends on a detailed appraisal of your costs and a realistic assessment of what you can offer. Only then can DIY be given a true viability assessment. 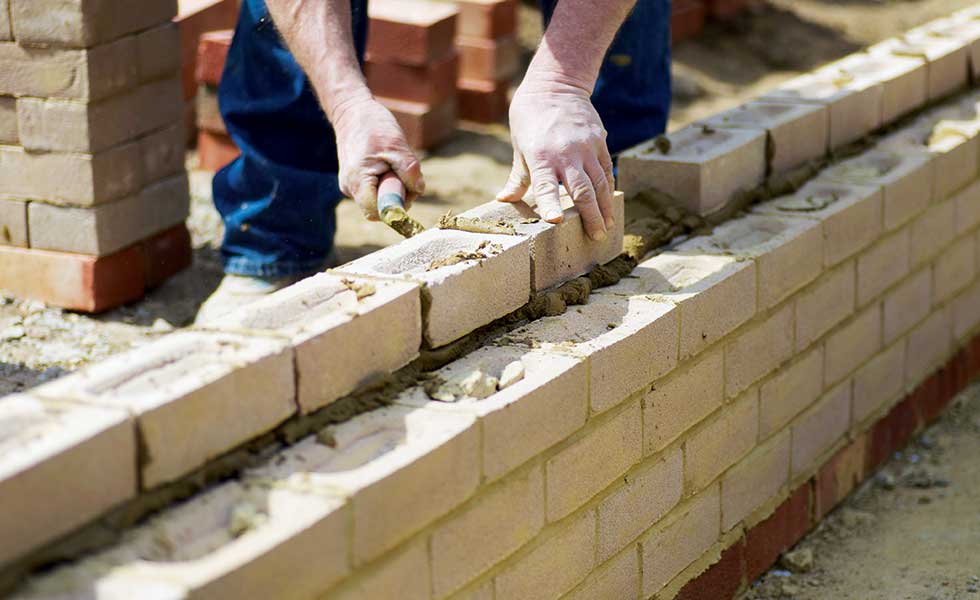 Provided you can do it well, you’ll save around £23/m² (facing) doing your own brickwork. It takes time to pick up, and requires skill, but current shortages of bricklayers mean the savings for DIYers are significant

What can you Save?

We’ve analysed labour rates to come up with a rundown of the most expensive elements:

If you can do it well – and it’s not as easy as it looks – doing your own bricklaying can save a fortune. Expect an experienced bricklayer working alone to achieve 400 to 500 bricks a day, which at a coverage of 60 bricks/m2 facing is around 7.5m2 per day. At a rate of £170/day that’s a labour rate of £23/m2.

Labour costs depend very much on the format of the tiles (obviously mosaics take longer than large-format tiles) but base your figures on 1m2/hr, or 8m2/day. At a rate of around £180/day, tiling labour costs are estimated at £22/m2 — and it’s relatively achievable for most DIYers.

A decorator would expect to be able to do three coats of paint (mist, base, top coat to a wall) based on 3m2/hr or 24m2/day. At £140/day the DIYer can expect to save around £6/m2 taking it on themselves.

Expect a team of three to be able to install 25m2 of insulation an hour (it’s quite straightforward, based on rigid foil-backed insulation) meaning the labour costs for this are very cheap at around £2/m2.

A team of two groundworkers with a mini-digger would hope to dig around 5m3/day. At £280/day the DIYer can hope to save £56/m3 by doing it themselves (digger costs excluded from price). Mini-diggers usually come with standard bucket sizes perfect for footings, so it’s worth considering.