A hot water cylinder once was just that — a cylinder that contains hot water. Usually copper, often with a 80 litre capacity, and sometimes with an immersion heater, this simple device did exactly what the name suggested. But now we have buffer tanks, accumulators, thermal stores and even calorifiers. What happened?

With the increasing need for efficiency, more complex heating control systems and the potential for multiple heat sources, a simple cylinder is no longer always the answer. The problem is knowing what all these different devices do and which one to specify.

Vented: This is the traditional hot water system. There is a cold water tank (or header tank) in the loft, a copper cylinder in the airing cupboard and an expansion tank (smaller than the header tank) also in the loft, providing the ‘vent’. The water pressure at the tap is provided by the difference in height between the cylinder and header tank.

Unvented: This is a pressurised hot water cylinder fed directly from the mains water supply. There are header or expansion tanks and they supply hot water to the taps at cold water mains pressure — generally much better pressure than a vented system. As they are pressurised they have valves and thermostats to ensure that they do not over-pressurise and explode. They therefore need regular maintenance, which has a cost.

Unvented cylinders are becoming more popular, despite being considerably more expensive, as they ensure good pressure at all outlets in the house without the need for pumps or header tanks.

A calorifier is a storage vessel that can generate heat as well as store it. A simple copper cylinder with an immersion heater could be called a calorifier. For all practical purposes the term is now redundant in a domestic situation.

A buffer tank (typically vented, and may also be called an accumulator) is a vessel containing hot water and is placed between the heat source and the heat output (such as radiators, taps, underfloor heating (UFH), etc). A buffer tank is installed to improve the efficiency of renewable energy systems, usually heat pumps and biomass boilers.

A boiler can react to demands for heat more quickly and more efficiently than a heat pump or biomass boiler can. A 12kW boiler might deliver anything from 4kW to 12kW, depending on the demand. A 12kW non-inverter heat pump will deliver 12kW whatever the demand. If the demand can be met with 4kW, then the heat pump will only operate for a very short period, which is very inefficient and known as short-cycling.

This is less true with modern inverter-driven heat pumps as they operate in a way which is more similar to a boiler, but a buffer tank, of some form, is still a good idea for most heat pump and biomass boiler installations.

The storage vessel needs to be sized to meet both the heat source and the demand. A gas boiler heats water quite quickly so the hot water cylinder can be small — often 80 or 120 litres. A solar thermal system will produce a lot of hot water in a short period of time, then none for a long time. So the storage vessel needs to be big — 300 to 400 litres. A thermal store will typically be 200 to 300 litres, which is a happy compromise for the typical family, allowing for both traditional and renewable heat sources.

A thermal store is a means of storing heat. Heat is supplied direct from the boiler (or another heat source, such as a heat pump), which eliminates efficiency losses. The thermal store typically contains one or more heat exchanges (which may be coils or external flat-plates), which are heated by the surrounding water.

A thermal store can also deal with multiple heat sources (for example, boiler and solar panels or heat pump and woodburning stove). In these situations, the technology comes into its own. A good thermal store will select the cheapest heat source to call on when heat is needed. It becomes the ‘heart’ of the system, managing the supply and distribution of heat as required. 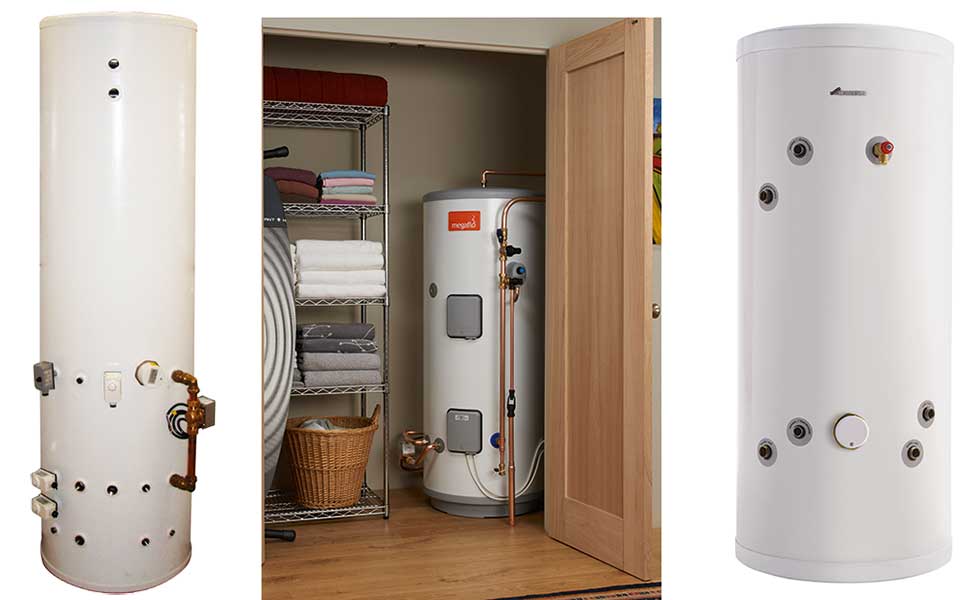 Chelmer Heating’s Ecocat is unusual in that it has two sections within the cylinder, essentially a cylinder inside a cylinder. The top cylinder serves the hot water and the bottom is the buffer for the heating system. Both of these cylinders can be heated by three heat sources and as a consequence it is the only thermal store that can use solar thermal heat and comply with Renewable Heat Incentive (RHI) requirements.

As the Ecocat thermal store is indirectly heating water it can more simply take heat from multiple sources. Brent Witherspoon, managing director of Chelmer Heating, says: “More and more people are using renewable energy, sometimes along with a gas or oil boiler. In that case, a thermal store is the only answer.”

Should I Install a Indirect Cylinder?

Indirect cylinders have been around for many years doing a perfectly good job. Plenty of simple indirect and mains-pressure systems are still sold, and where there is a single heat source and broadly similar heat output demands (ie radiators and domestic hot water), that is the right option. But they are probably not best where there is underfloor heating and some form of renewable energy.

The advent of condensing boilers, the movement away from combi boilers and the increasing use of low temperature heat sources like heat pumps means the thermal store is becoming increasingly necessary. Add to that potentially high temperature inputs like solar thermal systems and woodburning stoves and the low temperature output needed by underfloor heating, and precise heating management becomes a requirement.

Should I Install a Thermal Store?

“Control is essential,” says Brent Witherspoon. “We need to control the output temperature and the storage temperature. But with multiple heat sources, we need to control which one to use to be able to always choose the cheapest.” And once again, a good thermal store does that.

An indirect cylinder will be around £150 to £300, depending on size and quality. A good thermal store, like the Chelmer Ecocat or the Gledhill Torrent, could be over £2,000, again depending on size — reflecting the fact that a thermal store is an energy management system, and without it your renewable energy system will just not work properly.