When Louise and Ivor Nicholson were given a 65m² post-war bungalow – which had been in Louise’s family for a quarter of a century – the intention was to extend and remodel.

However, after surveying the situation, they realised it would be more cost effective to knock it down and rebuild.

By doing so, they have created a modernist single storey home which takes advantage of passive solar gain and makes for an efficient family home.

The original family home in rural Aberdeenshire was cramped and damp, but had stunning views down to Balmedie sand dunes and a large garden. The Nicholson’s thought that these redeeming features would make it the perfect location for their home.

However, the quantity surveyor’s assessment, which took into account the VAT they would have to pay, lead to a ‘scary’ final cost. It was thus realised that to demolish and rebuild would be more cost effective — especially since stripping out the home would cost £12,000, whereas demolition would only be £9,000.

There were also structural issues, and trying to make the old house energy efficient would be tough, so starting again made practical sense.

Graphic designer Louise was keen on the idea of a modernist home with Scandinavian interiors. However, convincing the local planning authority that a pared down minimalist construction would work amidst Aberdeenshire’s flat farmland was not going to be easy.

By explaining the home’s structural issues, and that it would be hard to get modern thermal performance levels out of the existing structure, they were able to prove that keeping the house wasn’t a viable option. However, the planners were keen that its replacement echoed the white walls and slate pitch roofs of the local area.

What Louise had in mind was a simple white and glass box with a flat roof. They also wanted the home to satisfy the planner’s requirements for a more energy-efficient home, by harnessing the energy from the sun. 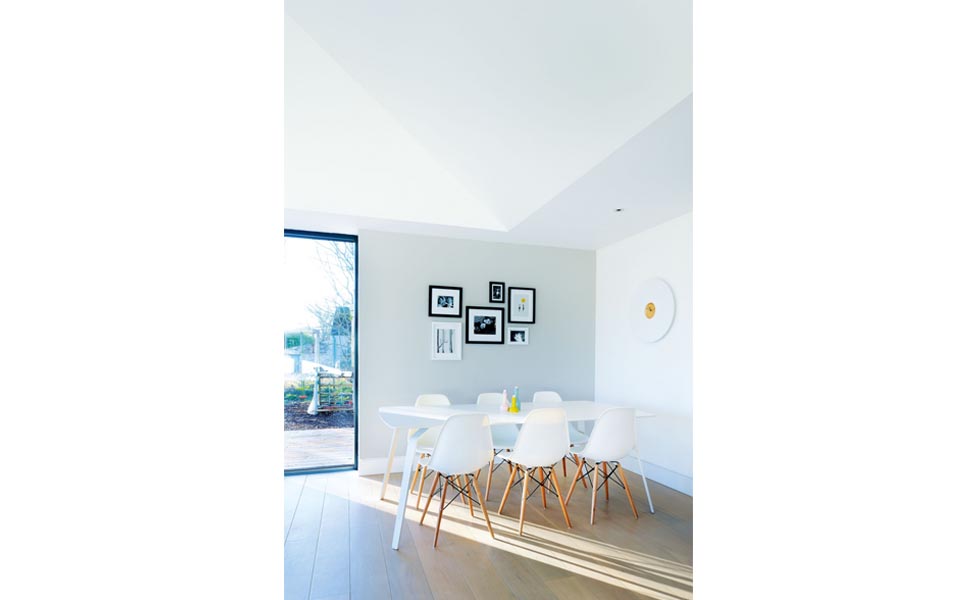 Passive house principles were applied and the house was orientated to follow the sun’s path throughout the day. Large glazed sections allow heat and light into the building to create a warm and bright living space.

The internal layout is effectively divided in two. One half contains an open plan living, dining and kitchen area with large lift and slide Velfac windows, opening out onto the south-east elevation. The double height living room space is particularly dramatic.

The other half of the home houses four bedrooms (one of which is en suite), a family bathroom and plenty of storage space. As well as this, a utility room off the open plan living area keeps the family’s clutter neatly tidied away, thus aiding a comfortable, but minimalist feel.

Outside, exterior finished have been designed to offer a fresh take on the local vernacular. White render and a Colorcoat Urban® Tata seam steel roof mimic the white slate-roofed homes nearby.

The couple’s commitment to creating a sustainable home was important to the planning department. Photovoltaic panels were installed to the garage roof to capture the sun, the savings of which help to offset the cost of the electricity required to run the ground-source heat pump installed in the garden; the latter powers the underfloor heating.

The most important move however, was building a well insulated home which uses passive solar gain and demands little heat in the first place.

Calling on family favours helped them keep to an impressive budget of just over £185,000. Skilled family members helped install the kitchen, bathrooms and engineered wood flooring. On top of this, Ivor is an electrician by trade, saving them a fortune in labour fees. Meanwhile, Louise managed the sourcing of internal finishes.

What emerged following a 10-month construction period is a contemporary new 155m² single storey family home, built using a bespoke timber kit with Kingspan insulation packed both between and outside of the frame, and complete with a smooth, low-maintenance rendered blockwork exterior. What’s more, the couple’s specification of solar PV panels is making them £1,600 a year thanks to the Feed-in Tariff.