Stefan Camenzind and his brother-in-law Rob Broomby were not looking for a conversion project when they happened upon a 19th-century chapel in the remote reaches of the North Pennines, County Durham. But, as fate would have it, the former Ebenezer Methodist chapel, which had been derelict for over 30 years, was to become a decade-long labour of love for Stefan and Rob.

They found the chapel by chance while on holiday, and put in an offer for the building, which was being sold by the Raby Estates. The lack of land registry records and paperwork, however, meant the sale took almost a year to complete.

Remedial work was swiftly undertaken to make the building weathertight, but plans to turn the chapel into a dwelling went on hold due to financial constraints. And so, over the following decade, Stefan and Rob visited twice a year to keep an eye on the condition of the building, commissioning maintenance when required.

Conversion plans finally began to take shape in 2013, when they were “mentally and financially ready for the challenge,” as Stefan describes.

The Conversion Design and Planning Stages

Fortunately, as an architect and Executive Director of Zurich-based practice Evolution Design, Stefan, and his team, were well placed to develop plans for the chapel. At the core of their approach was ‘keeping the essence of the building’. But again, the ‘red tape’ surrounding the change of use meant this preliminary stage was yet another lengthy process.

Local architect Lee Darvill ( 0778 617 6474) readied and submitted the plans for planning permission, and the application was successful.

One of the first major undertakings on site was restoring the fabric of the existing building. The foundations fortunately proved structurally sound, but several large cracks to one of the gable ends resulted in the entire wall being underpinned. The ‘patchy’ stonework also required repointing in numerous places. Once the stonework was finished, the building was insulated internally.

Much of the interior timber had to be replaced due to wet rot, including a number of the rafters. However, they did save the original roof trusses in the vestry – now the vaulted kitchen dining area. Original features were also restored.

A new mezzanine level was added, constructed in a steel frame. 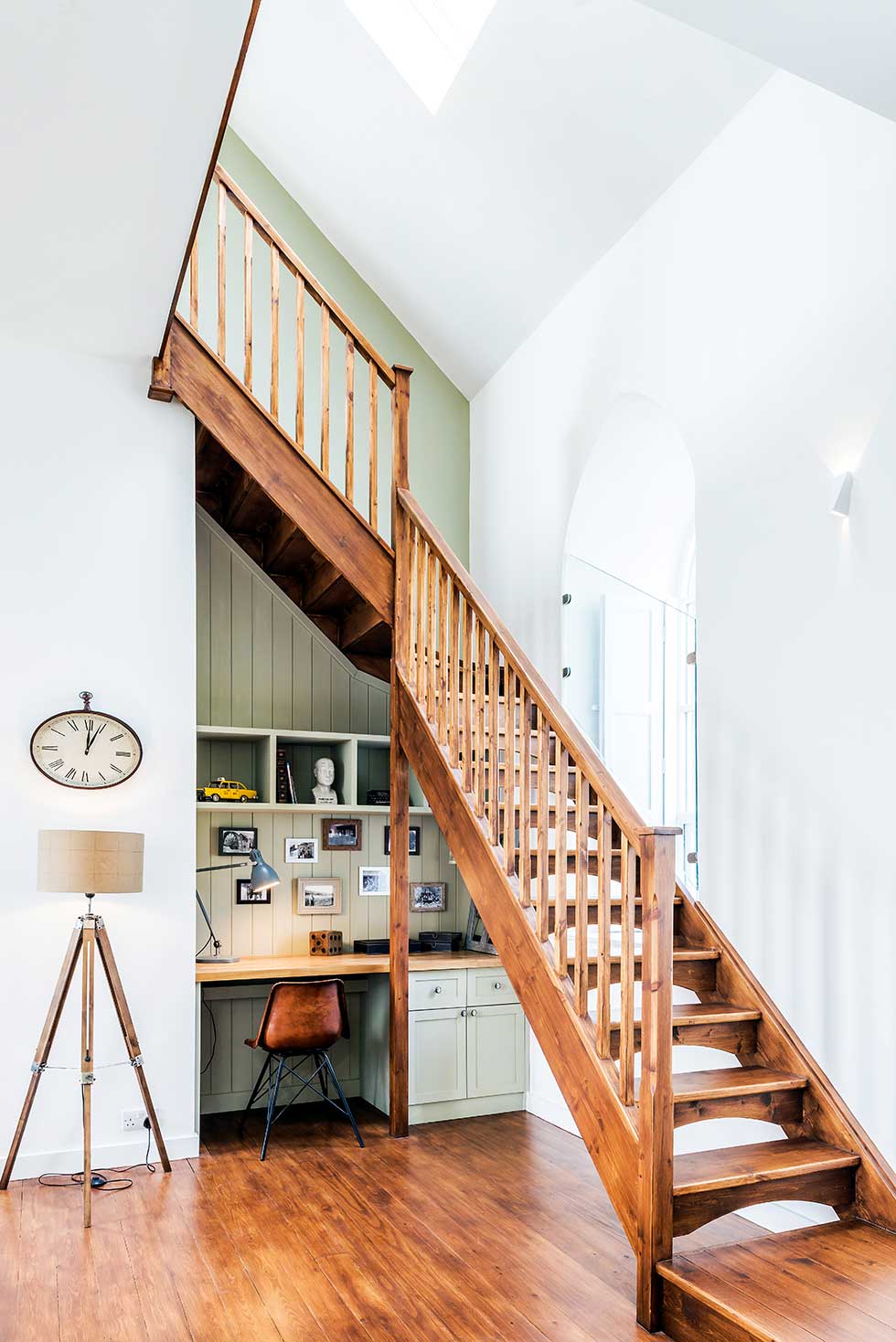 The bespoke joinery – including the windows and shutters – was crafted by Star Projects, who also provided the staircase, which leads to the mezzanine level bedrooms and en suites. The space beneath the staircase has been put to good use as an office, with tongue and groove cladding helping to zone this area. 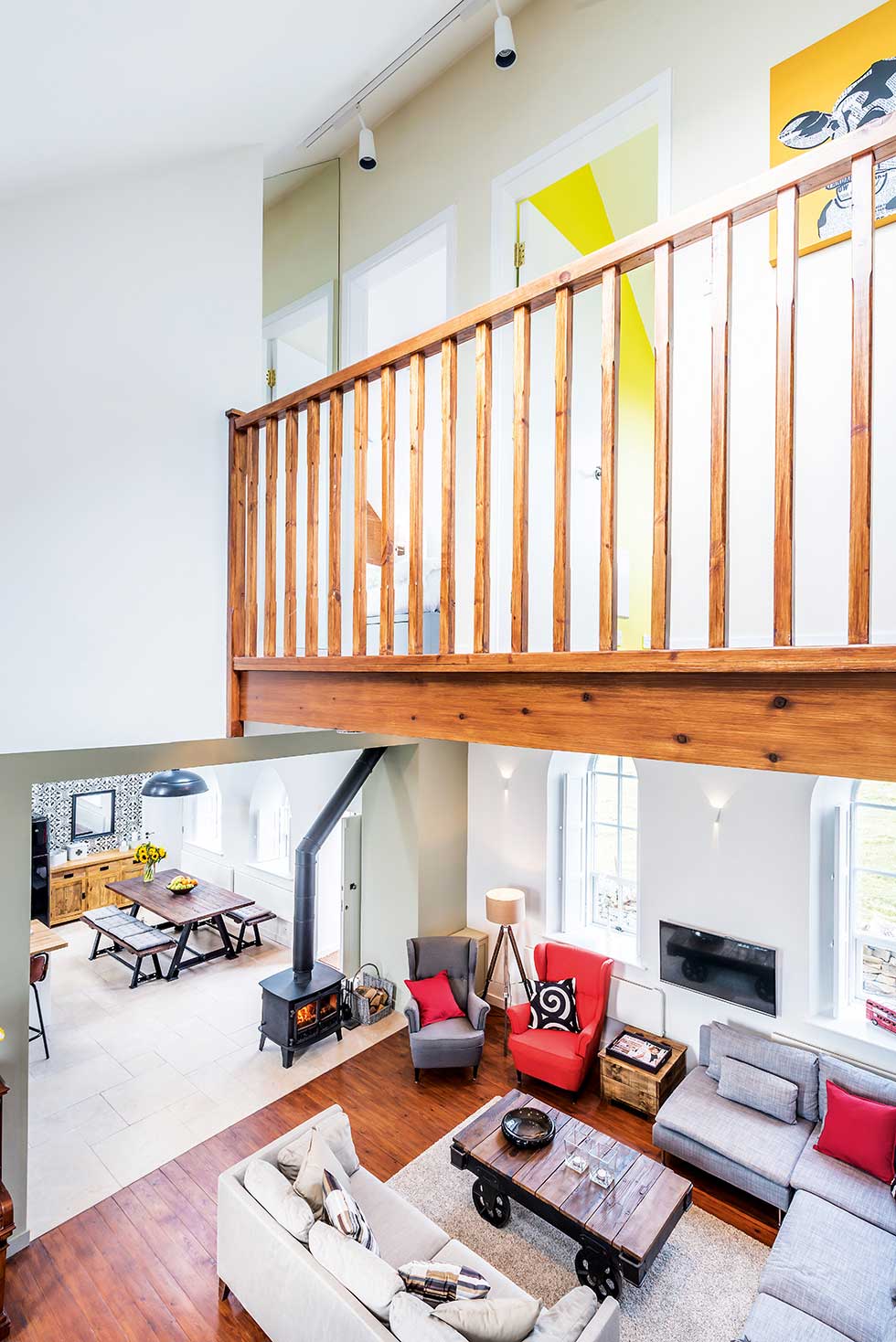 One of the most difficult design challenges faced by the team was the introduction of the first floor mezzanine level to accommodate the bedrooms and bathrooms. The mezzanine required careful planning so as to avoid subdividing the fine windows. 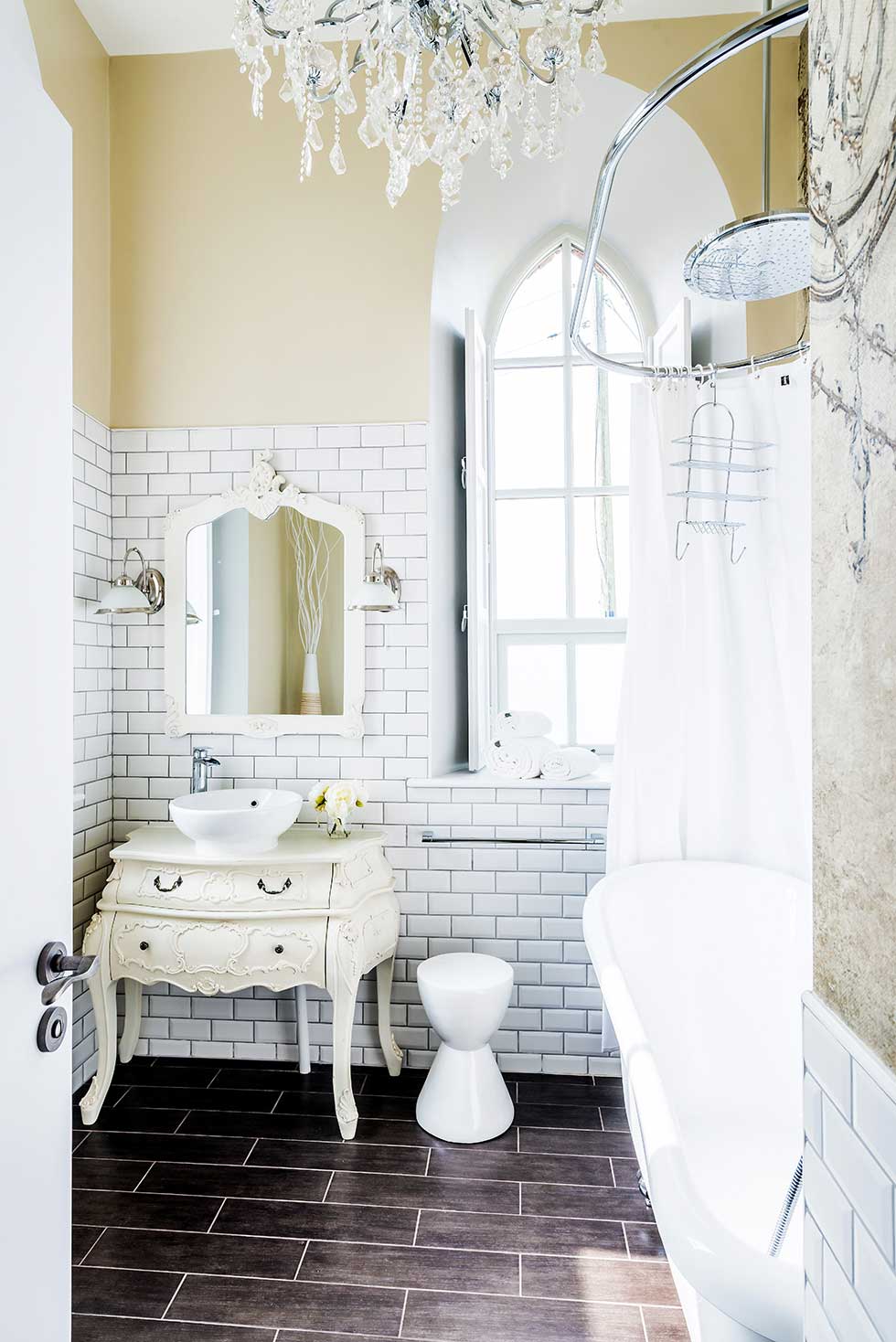 The ground floor bathroom features a traditional-style roll-top bath (the Winchester bath is from Victoria Plum), ornate bathroom furniture and a chandelier; all add drama to this space. 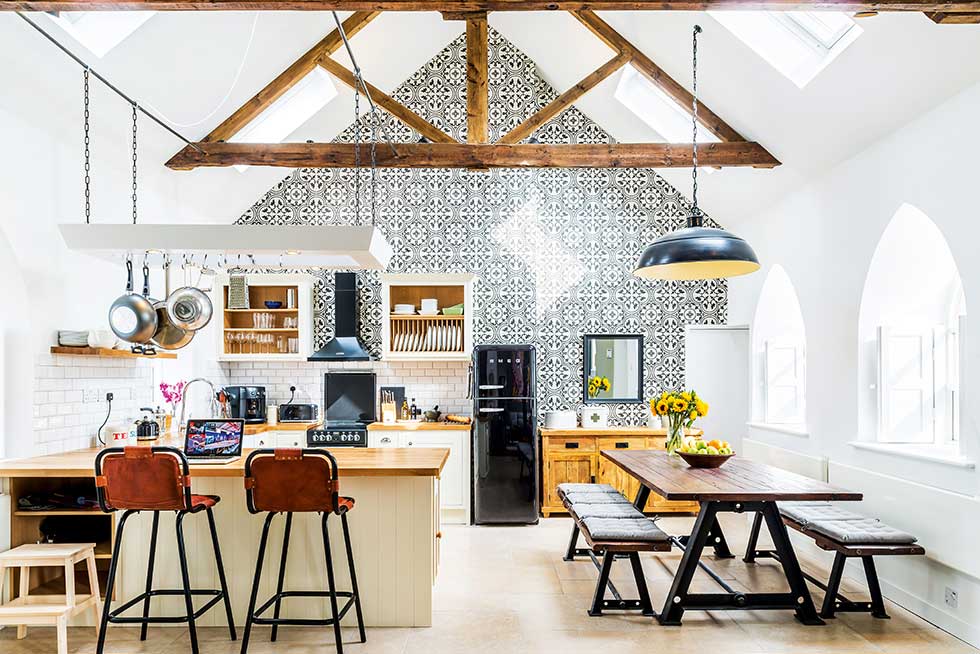 The kitchen diner sits within the former vestry. Much of the timber within the building was beyond repair due to wet rot, but the original trusses were salvageable; they now make for a characterful feature beneath the impressive vaulted ceiling. The handmade wall tiles, with their monochrome ecclesiastical pattern, from Cement Tiles, form a striking backdrop to the Howdens’ Greenwich Shaker kitchen. The Seraphin pendant lamp above the dining table is from Maison du Monde. 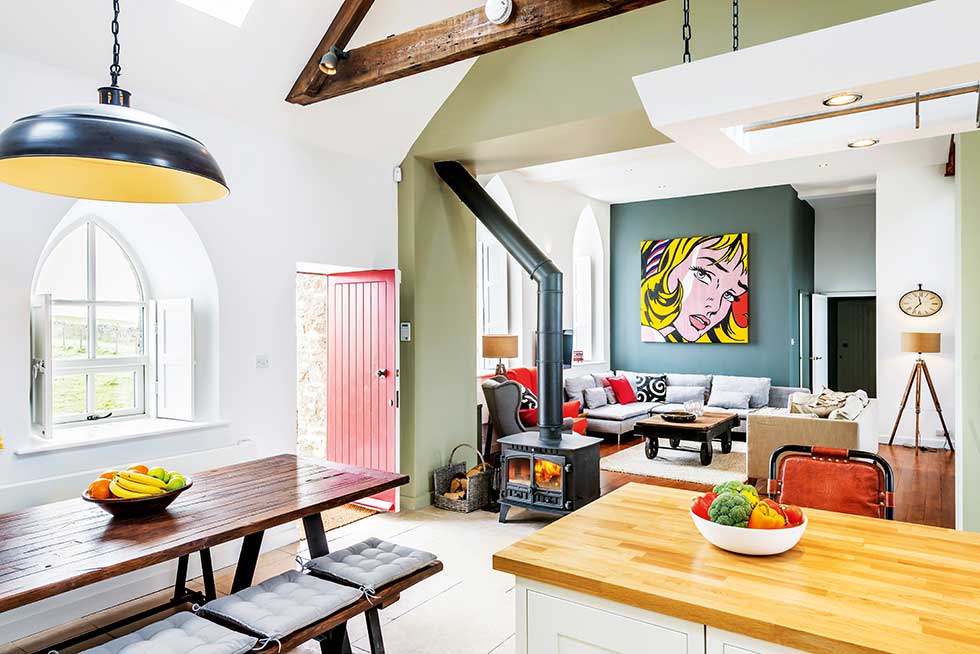 The ground floor is now home to a spacious, open plan kitchen, dining and living area (there is also a bathroom and bedroom on this level) — the central Hunter Herald 14 multi-fuel stove is double-sided, allowing it to be enjoyed from both the kitchen diner and living area. 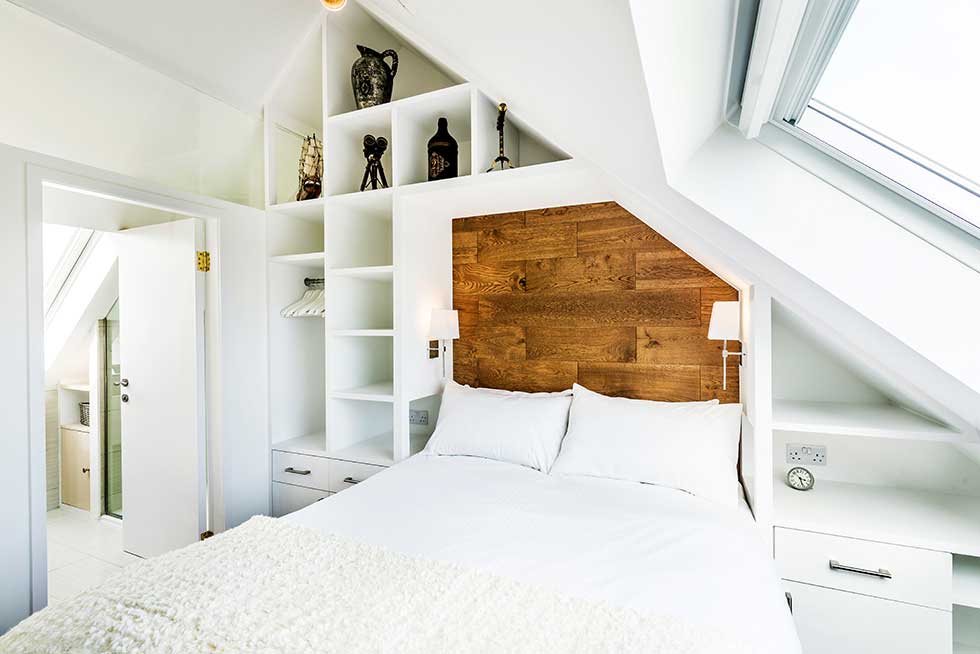 The mezzanine level features two en-suite double bedrooms, with built-in storage making the most of the sloping ceiling.