Architect Matt White and his wife Sophie took a gamble when they bought a home next door to a plot with problematic legal standing, but it has certainly paid off.

The complex ownership status of the plot meant they grabbed a bargain on which they built an outstanding family home in a popular London suburb.

Matt designed the house himself. The end result is a design masterclass for anyone looking to self build something practical, surprising, and which doesn’t fail to provoke a smile. Our judges were so impressed by their home, that they awarded Matt and Sophie’s home the awards for Residential Design and Innovative Home in our 2013 Daily Telegraph Homebuilding & Renovating Awards.

Matt and Sophie bought an end of terrace house (Number 25) in Shepherd’s Bush, London in 2005. There was an adjoining garden plot which had been registered under possessory title for about 23 years.

After some legal wrangling they were able to take adverse possession (commonly known as ‘squatter’s rights’) of the 77m² piece of land. This became the site for Number 23, the house they now live in. 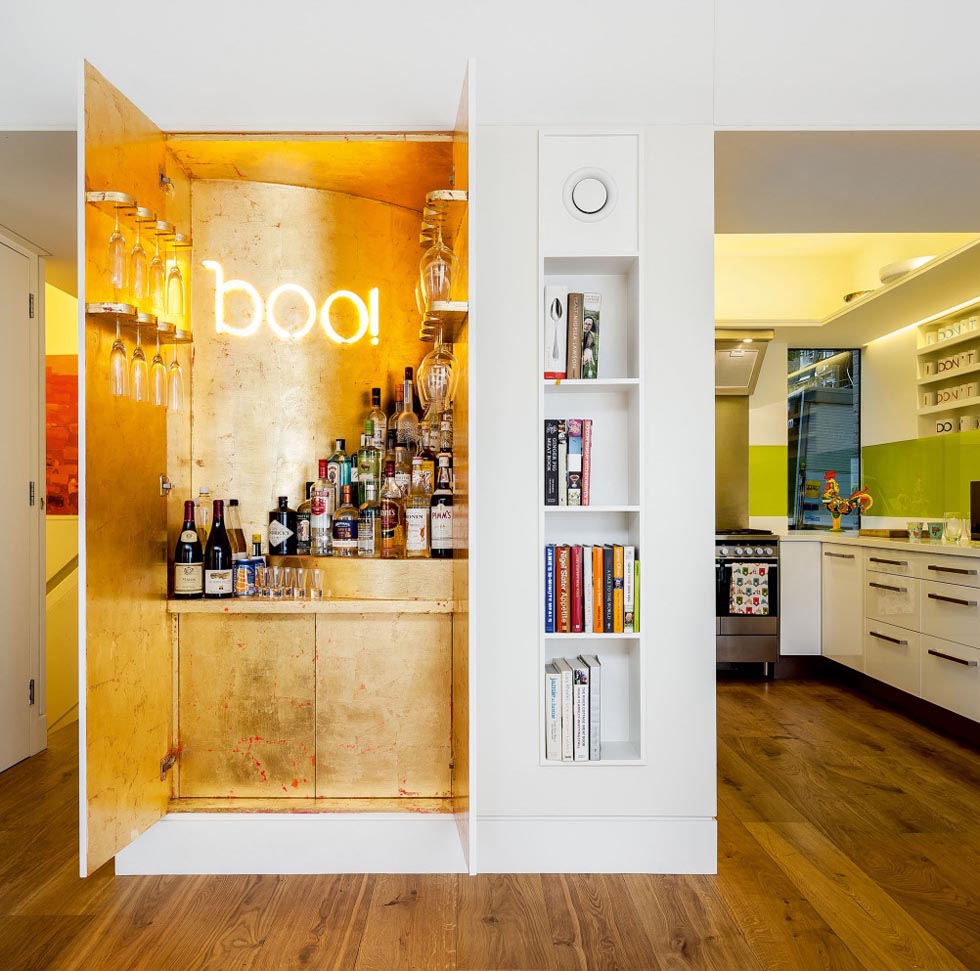 The couple wanted to create a contemporary family home which is light, playful, practical and fun.

It was also important that the house have low running costs, so sustainability and insulation was a high priority. 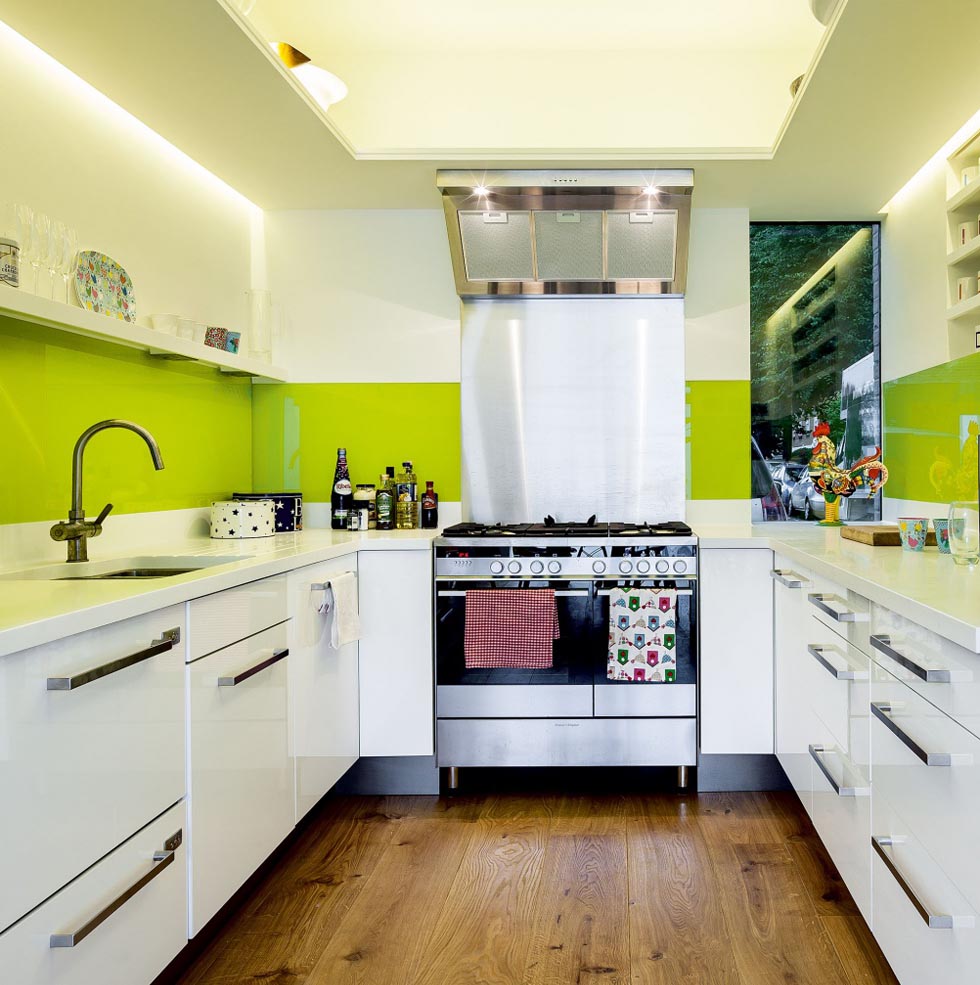 The whole house is constructed from an open panel timber frame surrounded in ultra-thin aerogel panels. These are super insulating, but being so thin, they leave more room for interior space. The panels are encased in glass-reinforced plastic (GRP) which is covered in a sand-mix render. The form and colour of the exterior is similar to the Georgian houses nearby.

The addition of a basement meant they were able to build a 159m² house on the tiny plot. To bring light into the large space – used as a playroom and office – Matt incorporated a sunken lightwell garden to the rear elevation. This extends the play area and features a colourful climbing wall.

The ground floor is open plan and perfectly suited to relaxation and play. Although the interiors scream family home, toys such as the wendy house outside, can be cleverly packed away to allow for sophisticated entertaining.

The first floor houses three bedrooms and a bathroom (there is also an en-suite bedroom in the basement).

Storage is a key influence in the design and has been included in lots of fun and imaginative ways. In fact, there are two front doors to Number 23 but one has access to a small storage area, just perfect for a pushchair, which can be accessed from inside. There are also hidden desk and storage spaces in the basement, which when open create individual work stations for the children. 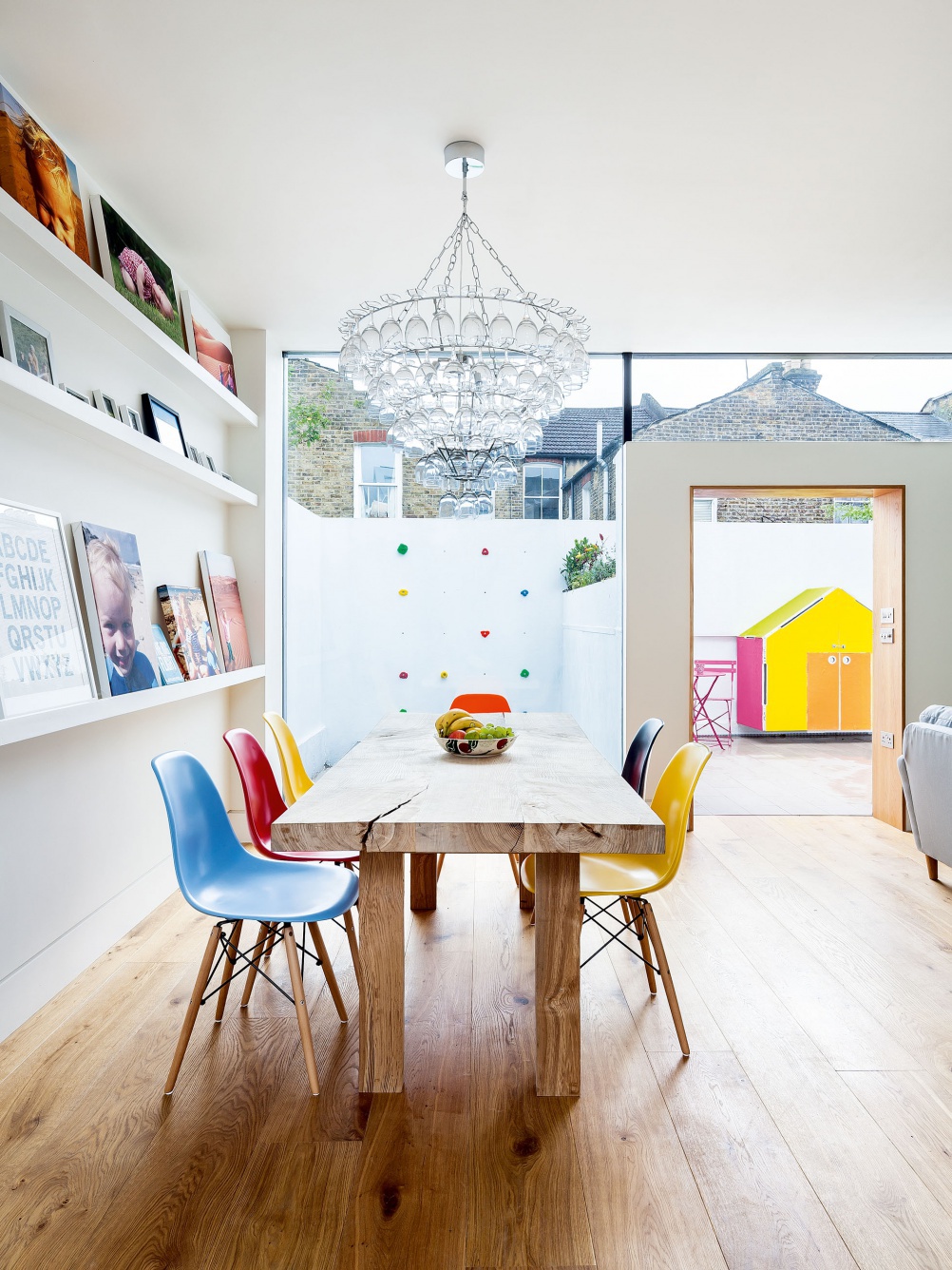 The Whites not only wanted a house to live in, but one they would enjoy. This is apparent in some unusual features, starting with the front door. When you ring the door bell, LEDs implanted in the rendering spell out ‘HELLO’.

The landing window is large and essential for letting in natural light, but it also overlooks the street below. The solution was to use a film called ProDisplay Intelligent Glass which provides privacy at the touch of a button.

Finally, a gold leaf drinks cabinet is concealed in the living room, and with the inclusion of clever lighting, the area is transformed into the perfect party suite. 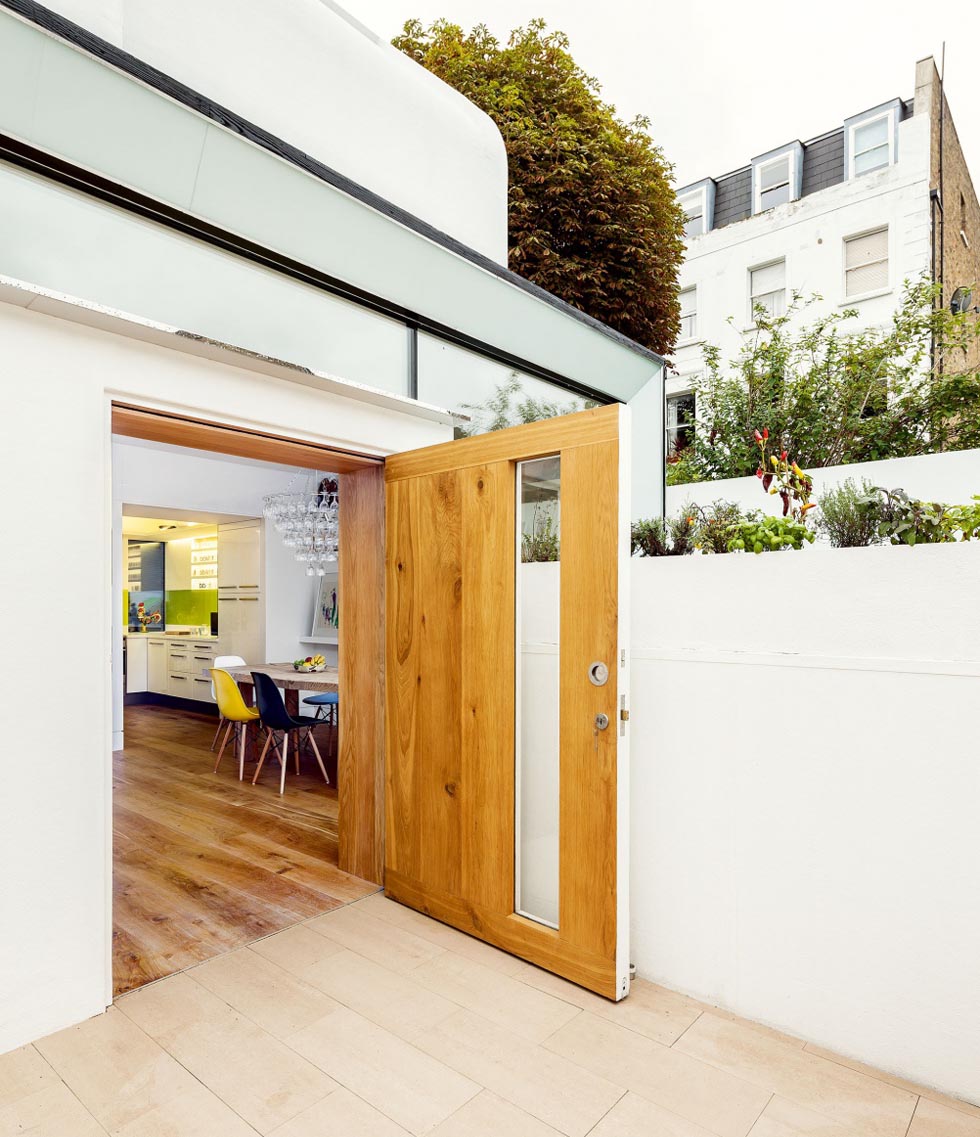 With design completed, Matt packaged the project out to a main contractor. The build took a year and a half and ran smoothly with the Whites living next door during the construction process.

Matt says that the most challenging aspect was getting timing right. For example, getting the Party Wall Agreement in place, finance sorted on time and materials delivered was hard work — especially with a young family to look after. 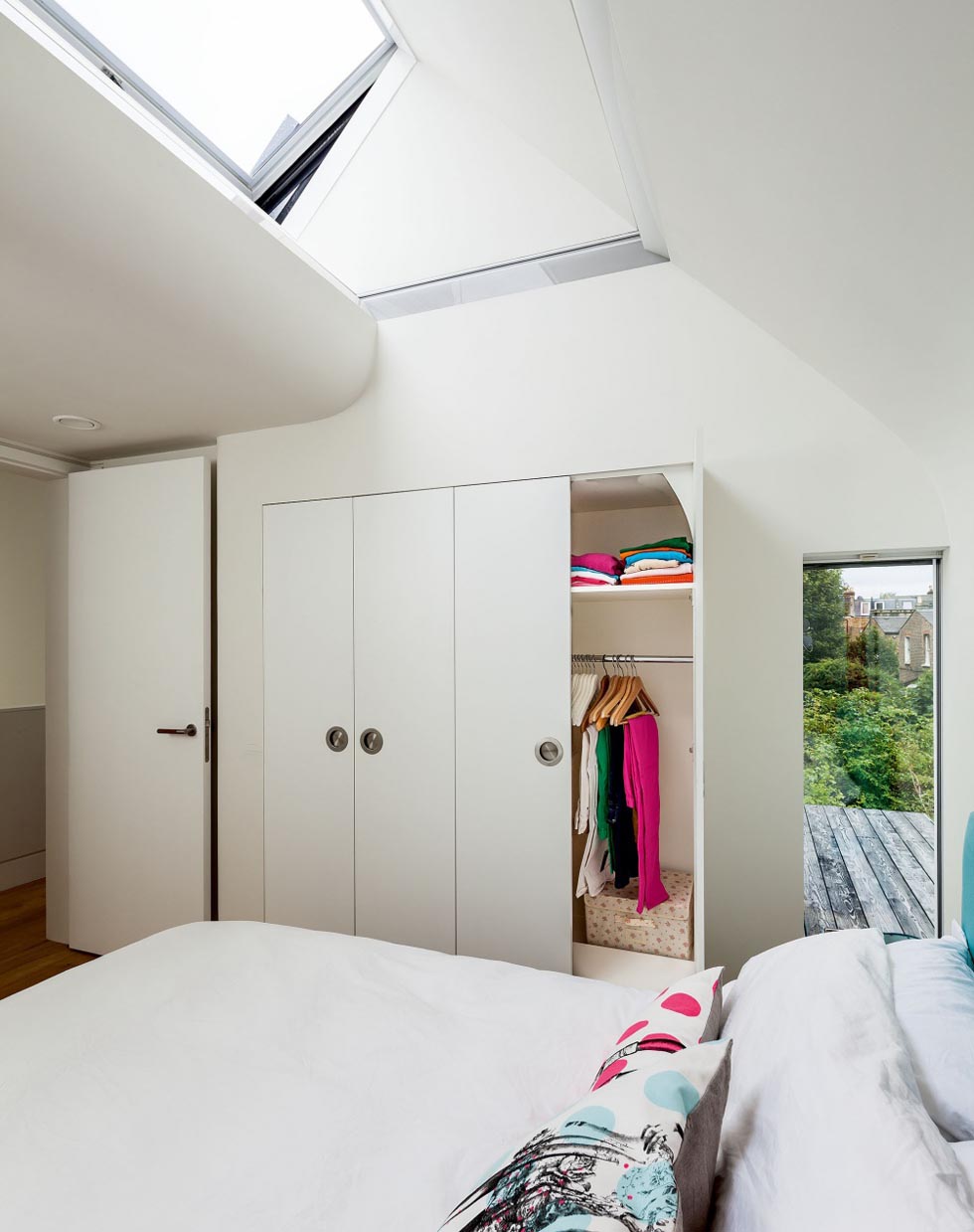 A prevailing aim was to ensure the house was cheap to run. They made this possible by using aerogel, a material that has large pores which inhibit the transfer of heat. It comes laminated to GRP, is soundproof and achieves a U Value of 0.64/m²K per 25mm².

Due to the incredible insulation, the gel-fire in the lounge is not necessary for heat, but provides a cosy focal point. 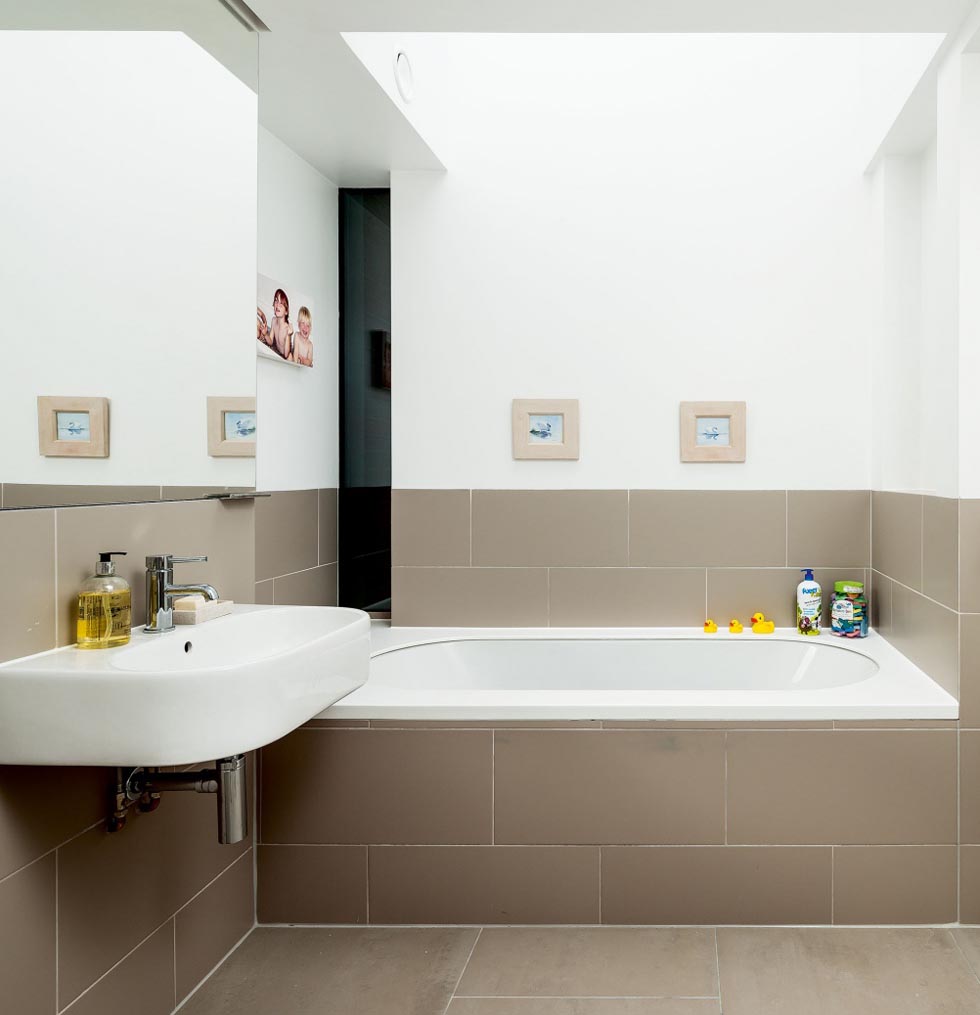 Matt says, “Leave enough money available at the end of the project to ensure that the bits you see, touch, smell and hear are as good as you’d hoped. It’s not fun to spend years of toil making your ‘dream home’ — only to be condemned to using a crummy shower because you overspent on some re-bar in the concrete. We spent quite a lot of money on the showerhead here.”