This little piece of baronial splendour in Somerset spent its former life as a cow barn, built in the 1890s. When Max and Linda Nash found it 16 years ago, the stone-walled, earth-floored structure was near derelict; but it did have some fine original features – protected from the elements by an ugly corrugated iron roof – which the Nashes have lovingly restored, including the A-frame roof trusses.

“It took the first year just to make the barn habitable,” says Max. “It had no water, no electricity, no sewage system — nothing. Fortunately it had no listing either.” While the work was done – the bulk of it by the Nashes themselves – they stayed in a local farmhouse, decorating it in lieu of paying rent.

They had to trace their water from half a mile away, put in a septic tank system and bring the electricity in on poles. The barn openings were filled in and they lined the walls with insulating block and laid a damp-proof course (DPC) and concrete screed on the floors.

“To stop rising damp in old stone buildings you can use silicone injections,” explains Max. “So we drilled holes at 150mm centres at floor level and pressure-injected the silicone. We also had woodworm treatment applied to all the old timbers. Both tasks were carried out by the same company, as in my experience it’s a good idea to give your loyalties to one business. This way you can develop a good working relationship — you never know when you may need their help quickly.”

The barn, which came with an acre of land, cost £35,000 to buy, and was developed in three phases — all designed by Max. The first phase cost £26,000, which provided a kitchen, dining room, sitting room, a downstairs bedroom and bathroom, and small attic.

“Then in 1998 we bought another five acres for £30,000 and developed the second phase at a cost of £15,000,” says Max, who began training as an architect but gave it up to work for various borough councils in research and development. “This gave us an entrance hall, a boot room and a shower room.”

The third and final phase, which began in May 2002, cost £22,000 and provided a main bedroom with a staircase, cloakroom, another shower room, two offices and a garden room.

The original barn measured just 80m2 but has now more than doubled in size to 185m2, with living accommodation running over two storeys. Though considerably larger, it still feels cosy and has immense charm, due to Max and Linda’s use of reclaimed stone, brick and timber throughout for an authentic effect. They have built an inglenook fireplace using a combination of insulating blocks and bricks from a nearby demolished Georgian house and a lintel which was a gatepost Max dug up in a field. They have put in a spiral staircase, which came from a 1930s Yeovil house via an advert and was made of wrought iron — “but I’ve infilled it with wood while its handrails are now a pergola in the garden,” he says.

One foggy Christmas, the Nashes hired a lorry and drove to Hampshire to buy a huge pile of timber from an old manor house in Sopley which was being knocked down. “For £450 we bought three big pine roof trusses plus panelling, balustrades and arches,” recalls Max. “One roof truss is now in our entrance hall and the rest is waiting to be used when we build again. Additionally, the upright beams in the hall came from an old barn in Bicknoller, while those in the sitting room used to be ceiling beams — it cost me £10 to rescue them from a bonfire. The stairs to the main bedroom came free from an old stable in nearby Milverton; the half tester bed was made from old skirting boards; and the two screens were made from old Douglas fir planks from a sawmill, which Linda stained.”

Max made one door from Jacobean elm floor joists given to him after a Laura Ashley shop (in a listed building) burned down in Taunton. “They were going to throw them away so I asked if I could have them,” says Max. Even the Rayburn was bought second hand from an old priory at Kerswell.

It may seem that the Nashes were extremely fortunate in their finds, but they bought materials which many others would reject. “Take the upright timbers in the sitting room,” says Max. “Some are of oak and some of elm but when I found them they were about to be burnt as they were green with mildew, dating from about 1700. It took us ages to rub them down and treat them — now they look as though they’ve been in our home for centuries.”

Due to planning restrictions the couple were unable to raise the roof height, so to achieve the desired two storeys the finished floor level was lowered 900mm below ground level — which took two seven-ton dumpers, a digger and 200 tons of earth. Footings and slab were set as the outer walls were erected.

Because of the low-lying aspect of the site there was a problem with the water table. To overcome this the inner skin of the building up to normal DPC level had to be tanked. A tanking product by Sovereign Chemicals called Hey’di was used to prevent water penetration. As a secondary precaution, a French drain was dug around the outside of the building at footings level and a 100mm outlet pipe laid across the garden to discharge to the river beyond. “We also installed a back-up float pump (hopefully never to be used) just in case,” says Max.

So after ten years of getting their hands very dirty, making a hobby out of scavenging materials and living through all the stresses and strains that a build project brings, do the Nashes think their home was worth the wait? “Absolutely,” says Max. “We really couldn’t be happier with the end result. There’s always the temptation to move on and do another project, but I think it’s time to sit back and relax — and enjoy this wonderful home we’ve created.”

A damp-proof course (DPC) is a physical barrier inserted into the fabric of a building that stops the passage of water. This can be on a horizontal plane, stopping water rising up from the ground by being sucked up by the dry masonry above, or vertically to stop water passing from the outside of a building to the inside. The use of silicone as a DPC has several advantages, mainly that it is quick and easy to install — as well as being highly effective. When injected it will revert to a liquid form, absorbing through the masonry; it then dries quickly, providing superior protection. 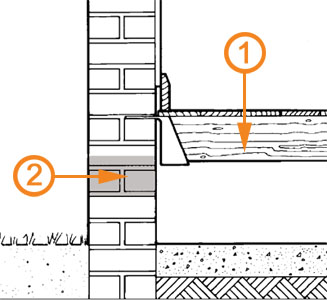 To install, holes are drilled at intervals, usually on the exterior of the building, to allow complete saturation of a band of the walling at the selected height and throughout its thickness; silicone is then pressure injected into each hole at the required dosage; all drill holes are then made good. Try permaguard.co.uk or safeguardeurope.com.