St. Nicholas Church House in Kyloe, Northumberland, is an impressive Grade II listed Georgian building, dating from 1792 and constructed of dressed stone. It features a prominent west tower with battlements as well as stained glass by Clayton & Bell, whose windows adorn many of the country’s largest ecclesiastical buildings.

When pilot Ian Bottomley and his partner, Sally Onions, a bookkeeper, first saw the 300m² church ten years ago it was already in the early stages of conversion. Planning permission had been secured for a change of use to a craft centre with accommodation above, but the owner was struggling to cope with such an ambitious project and had decided to sell. 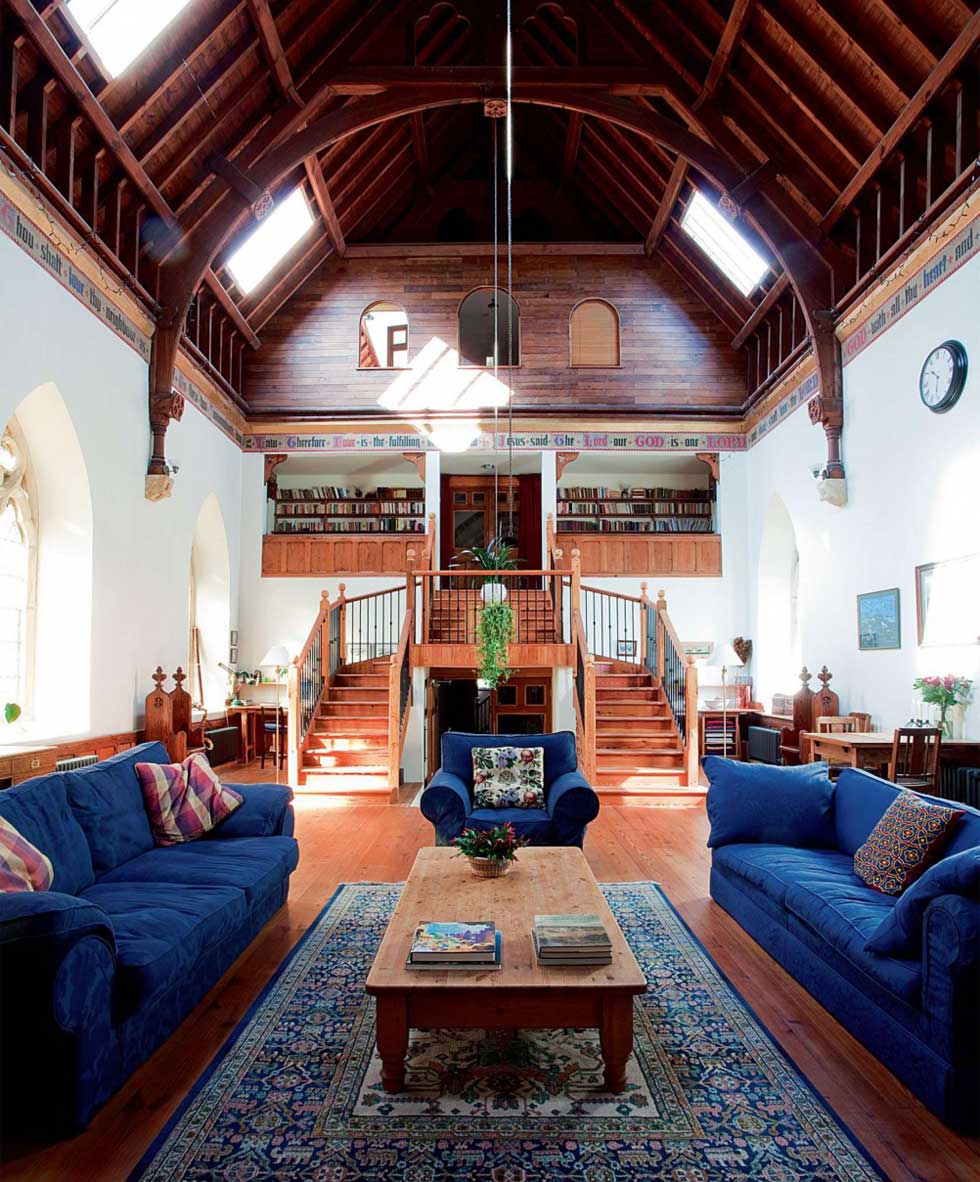 The church stands in a peaceful, elevated position and enjoys views over Northumberland’s heritage coastline to the Holy Island of Lindisfarne. “We were bowled over by the setting,” says Ian. “Sally and I had been looking for our first home together and liked the idea of doing up an old vicarage. Converting an old church seemed even better.”

Ian and Sally each owned a terraced house in Northumberland, and sold one of these properties to fund the purchase of the church. Their first task was to remove all of the ugly breeze block partition walls and the new first floor, which divided the beautiful stone mullioned windows in half. All of the blocks were then carefully cleaned and reserved for future use to help reduce costs. 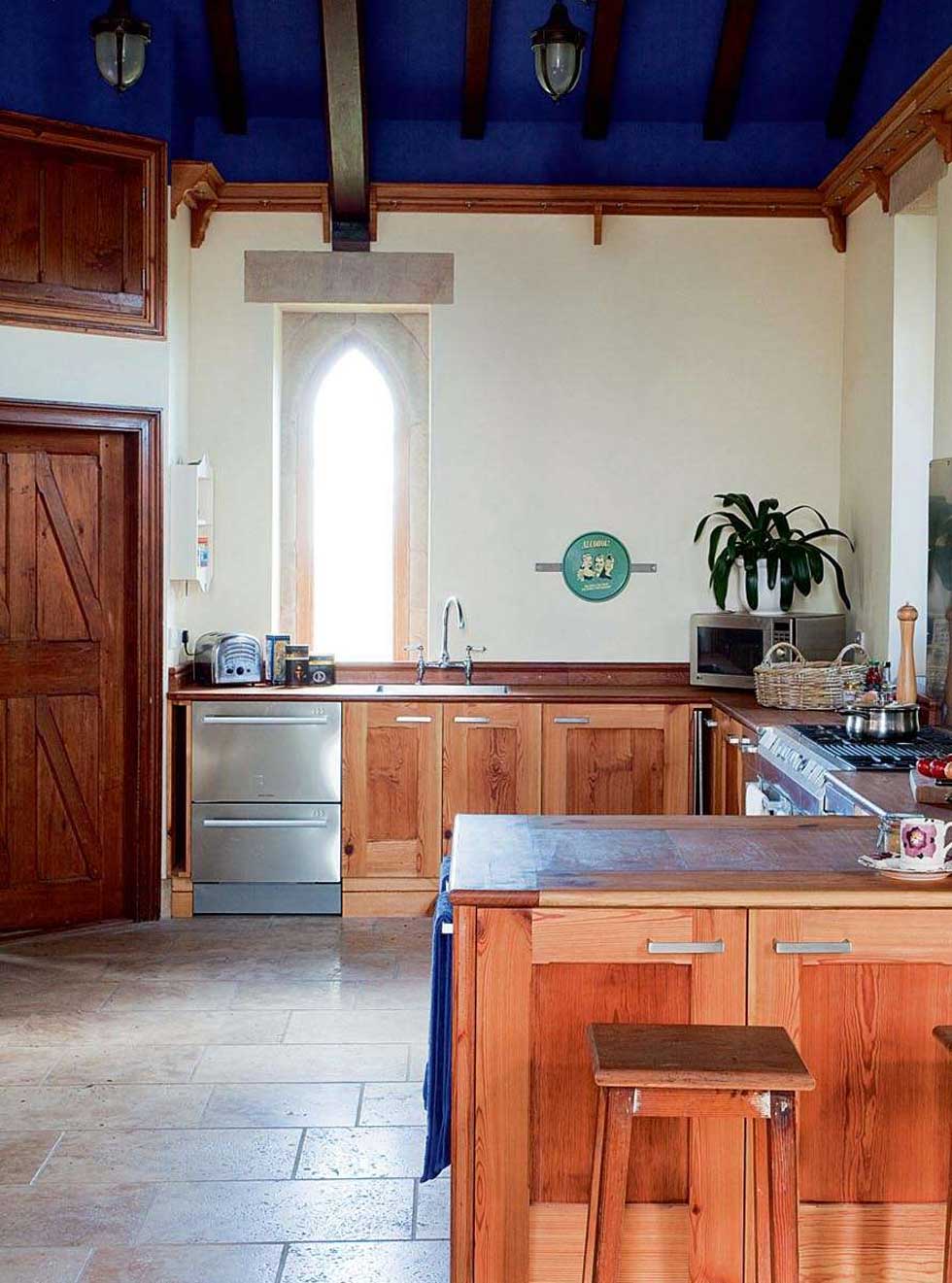 The vestry has become the kitchen. Ian made the kitchen units using reclaimed pitch pine and old pew seats

“The whole place was in quite a state,” says Sally. “Neither of us had ever tackled a renovation before — let alone something as daunting as a cavernous church. Ian preferred a contemporary approach, with lots of glass and steel, but in the end we opted for a more conventional look.”

Ian has a background in computer graphics and created a 3D model of the church, which allowed the couple to take a virtual tour around the interiors. They then presented their final design to a local architect specialising in historic buildings, who tweaked the plans ready to be submitted for planning and Building Regulations approval. Various organisations needed to be involved, including English Heritage and the Church Commissioners, and the initial design stage took almost two years to complete. 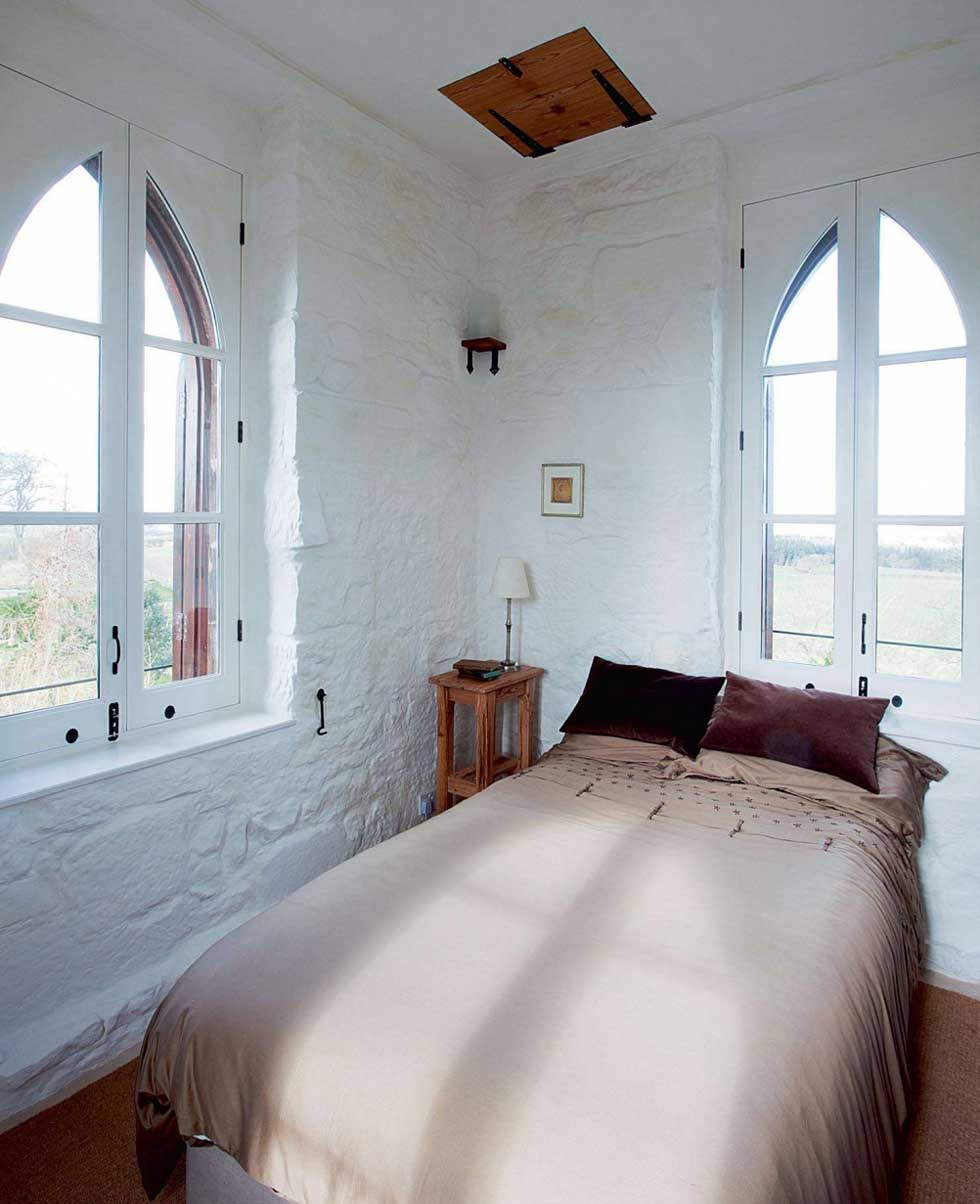 The main body of the church has been left open plan and incorporates the chancel, nave and vestry. This space includes living, dining and kitchen areas, with new stairs rising up to a galleried library at one end. A separate kitchen and sitting room provide more modest winter quarters for Sally and Ian, who were aware that heating the entire church year-round would prove impractical for just two people.

“We devised a layout which gives us the best of both worlds,” says Ian. “An impressive, open plan entertaining space, and smaller, cosier rooms for everyday use. We’ve effectively built a small three storey house to contain three bedrooms, two bathrooms, a lounge, kitchen and utility room, using structural steelwork inside one end of the church.” 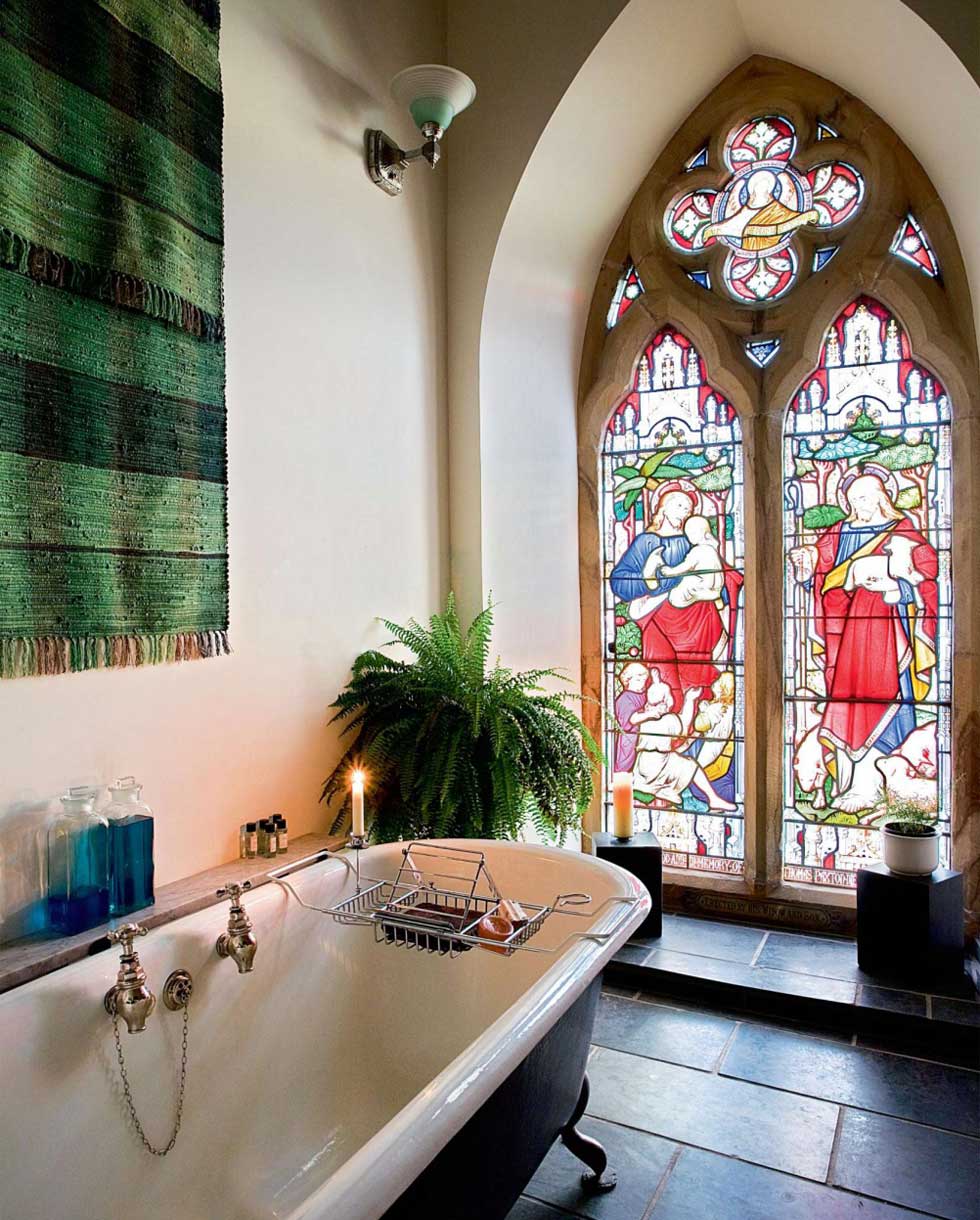 Initially, the most pressing task was to weatherproof the listed building, a process which included replacing a missing window, eradicating damp and employing a company to strip and repair the huge roof. Around 80% of the original slates were suitable for reuse and externally the church remains virtually unchanged. Inside, a huge concrete raft was poured, with friends helping out — fuelled by pizza and beer and supervised by Ian’s father, a retired builder.

“Ian and I are both quite practical, and although we left the roofing, plastering and plumbing to the experts, we tackled everything else ourselves,” Sally explains. “Ian’s brother supplied the structural steel frame which we infilled with stud walls, and I became quite proficient at plasterboarding, laying floors and decorating. My mum is now accomplished at erecting scaffolding, and I was happy to work at high levels.” 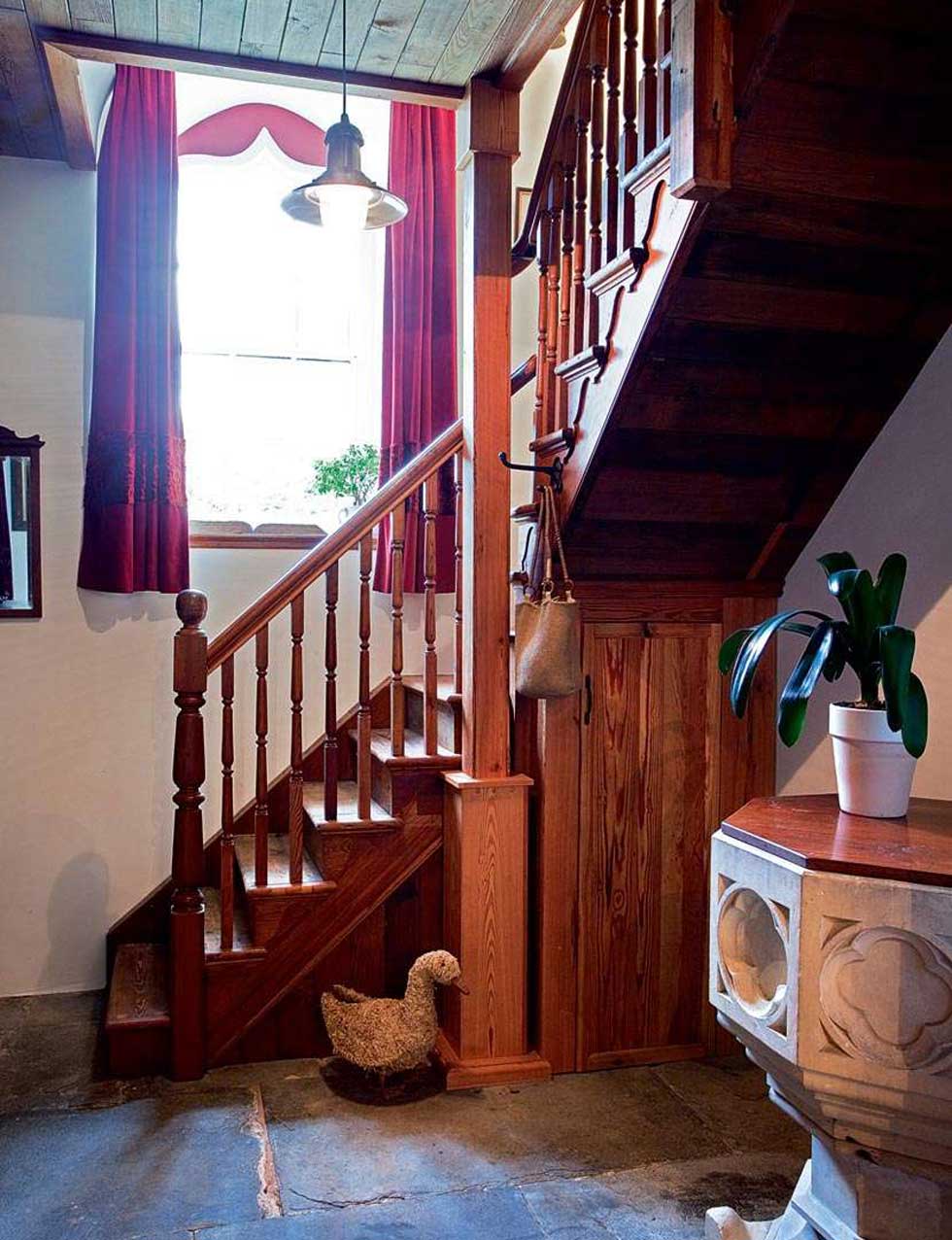 A smaller staircase leads up to more modest living quarters in the ‘winter’ part of the building. The original stone font can be seen in the corner under the stairs

For six years the couple laboured on the church, insulating the building, fitting conservation rooflights and installing underfloor heating. A wooden floor has been laid in the nave, and the stone aisle was taken up and used to patch an incomplete flagstone floor in the chancel. The church porch opens into a lobby situated within the tower, complete with a stone flagged floor and original baptism font. An inner hallway with Brazilian slate flooring passes the winter kitchen and sitting room, which features a carved stone cross thought to date back even earlier than the church.

Steps lead up to the impressive full-height living area, which has an open timbered ceiling and a tinplate frieze on which a psalm has been painstakingly hand-painted by a former vicar’s wife. Lit by stained and clear glazed stone mullion windows and the new conservation rooflights, the 35-foot-high space is heated by underfloor heating backed up by cast-iron radiators. Care has been taken to ensure that the main architectural features have been retained and, where appropriate, fittings have been sourced from other ecclesiastical properties. 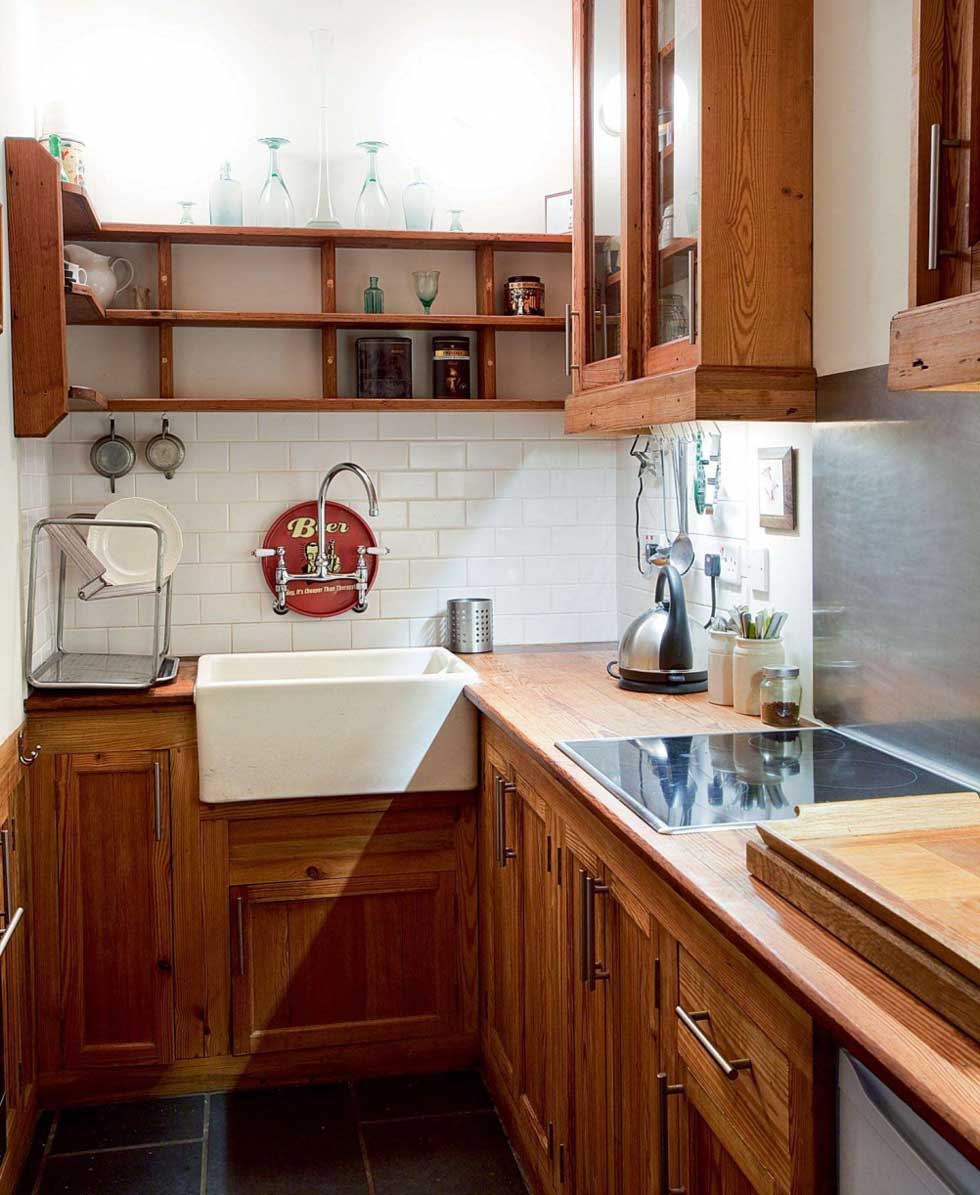 To avoid having to heat the enourmous spaces all year round, a smaller ‘house’ has been built within the church, featuring three bedroom, a lounge and the above galley-style kitchen

Finding suitable items became a virtual obsession. “Doors are out of a school in Manchester and the wainscot panelling around the living room came from a chapel in South Wales, and was probably our best find,” says Ian, who hand-built the impressive staircase leading up to the library using roof timbers from a hospital in Bradford. He also crafted the vestry kitchen from reclaimed pitch pine using pew frames, with worktops made from old pew seats.

Repairing between the rafters uncovered some slivers of vivid blue plaster, which Sally and Ian took to be colour matched. They have reinstated the striking blue ceilings above the vestry kitchen, the chancel dining area and the open plan altar bedroom, which is lit by four stained glass windows and may be curtained off from the main body of the church. 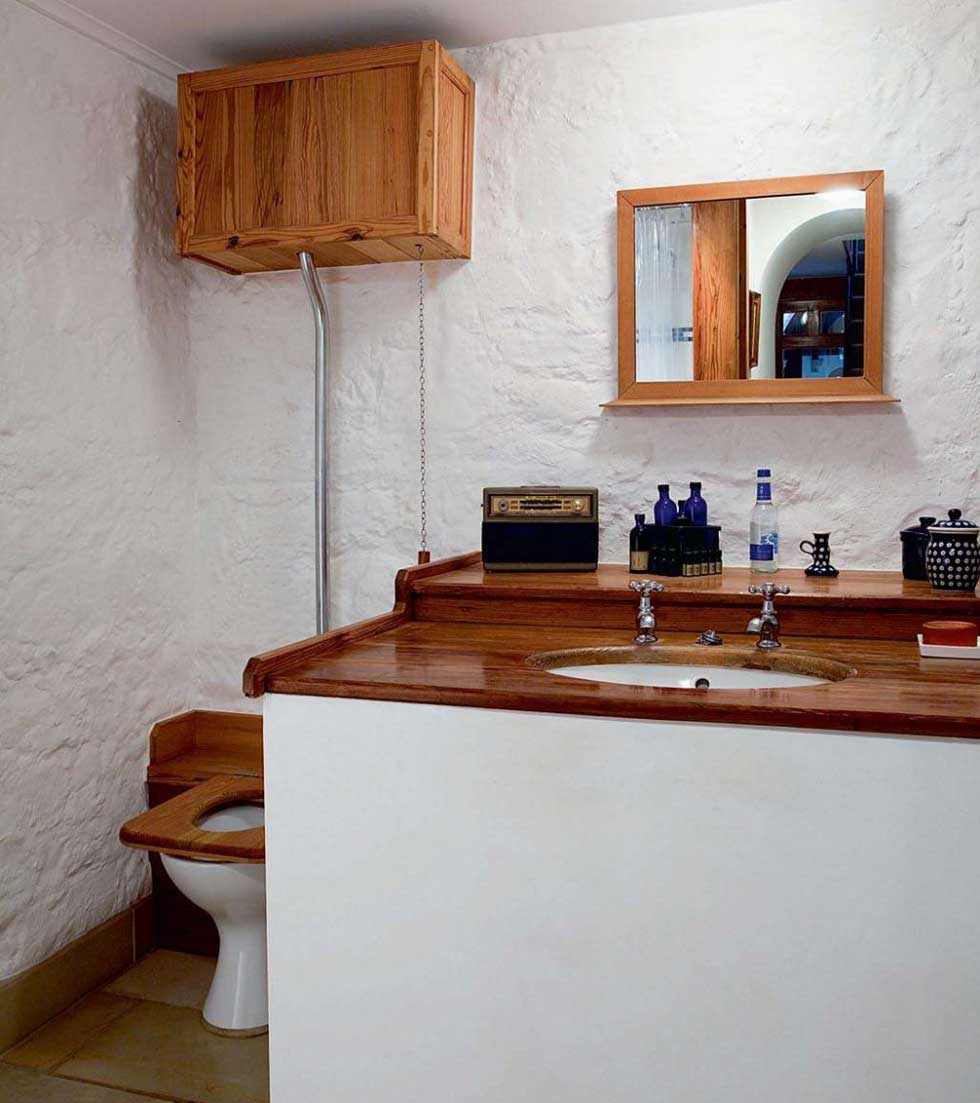 “Everything needs to be scaled up to avoid being dwarfed by the building,” says Sally. “Ian made the long dining table using left-over pitch pine and pew seats, with newel post legs, and the top of our coffee table is actually a full-sized kitchen table.”

Once the interiors had been completed the couple turned their attention to the churchyard, which extends to almost an acre. Permission was granted by the Church Commissioners to move some of the gravestones against one wall of the church, creating a private lawned area with sweeping coastal views.

“Taking on this conversion has been a real labour of love,” says Ian. “It has totally changed our outlook and the way we live. In fact, now we can’t even visit another church without wondering where we would put the bedrooms!”

How to Buy and Convert a Church

When a church is no longer required, it becomes a ‘Redundant Church’. Planning permission is normally required for a change of use, and listed building consent may apply. You will also need to submit your plans to the Uses Committee Secretary. If there is a graveyard attached to your church, the human remains must be removed and interred elsewhere, although if your plans will not disturb any graves the Home Office can grant an exception. Church conversions are zero rated for VAT.