When architect Liam Denny stepped into the garden of a rundown 1960s Devon bungalow in spring 2013, he marvelled at the fantastic outlook and had a fleeting sense of déju vu.

“As a student I came up with a hotel bedroom design that opened out to an amazing view,” he explains. “I’ve always liked that idea, so when I saw this property perched above a valley of fir trees I could see the site was all about that: the view on the other side of the hill.”

Liam’s partner, Mark, also an architect, had the similar vision. But what really appealed to them both was the juxtaposition of the bungalow and its setting — which they went on to anchor in to the concept of their new home.

A View to Self Build

Mark and Liam were living in Brighton and had never intended to buy – let alone build – a house in Devon. But after a couple of years regularly visiting Lyme Regis to work on a friend’s project, they grew to love the area. On a whim one weekend, Mark was casually browsing properties online — within three weeks of seeing the rundown bungalow, they were in the process of buying it.

At first the couple thought they’d spend £100,000 renovating and extending the property, but soon discovered the building had been constructed with Woolaway concrete panels that had begun to corrode — leaving them with no option but to demolish.

Mark and Liam worked out they could stretch their budget further but nonetheless, finances were tight, and they were grateful for the 20 per cent VAT savings provided by opting to build a new home. The other positive was being able to use the existing concrete foundations for their new home. Tests had shown the perimeter foundations to be over a metre deep, with a 300mm concrete slab under the newer ’90s extension too.

“We saved around £15,000,” says Mark. “We were also able to keep the septic tank and drainage, and electricity was already connected.” 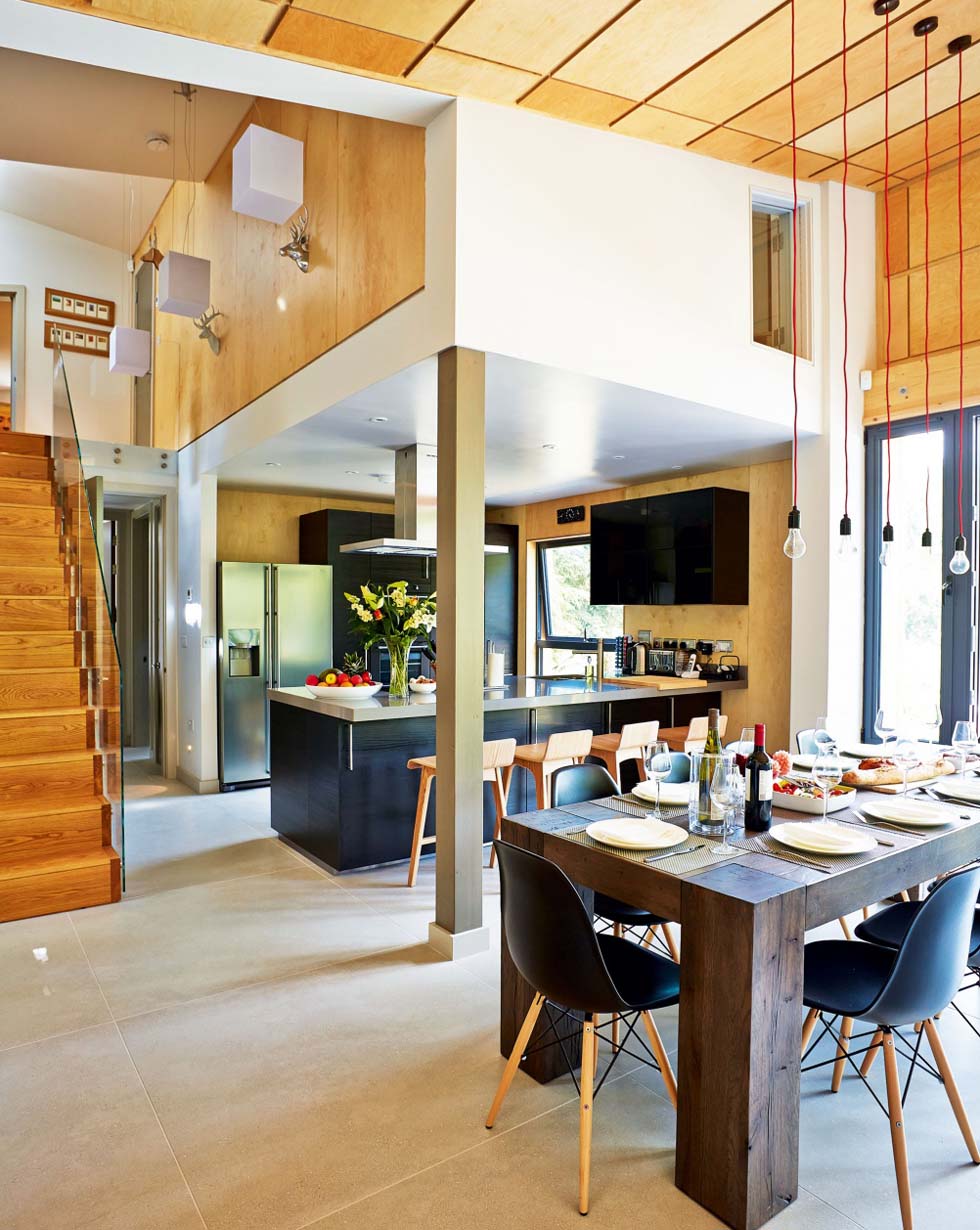 The hallway opens into a large room zoned for cooking, eating and relaxing, with sliding doors that frame the view of the fir tree forest. This space features a mix of ceiling heights, with a bedroom positioned above the kitchen, while the dining table sits beneath an impressive double-height space. The wooden ceiling is neatly offset the charcoal grey Metod kitchen from IKEA and grey quartz worktop from Mayflower Stone

The couple decided a timber frame build was the quickest and most cost-effective option and searched online for images of contemporary timber frame homes as a springboard for their own ideas. “I was drawn towards the style of vertical timbers and a monopitch roof made of standing seam zinc,” Mark explains. “We thought we’d use oak cladding but our builder said it would slow us down as it’s too tough to quickly nail to the frame. We found out that western red cedar was a better option because of its high resin content, and it is also cheaper to buy.”

The couple originally considered a cantilevered design, given that the site slopes steeply away with a 15m difference. “Liam and I decided it was too much of an architectural extravagance for our budget,” says Mark. “So we considered entering the property over a bridge to the first floor instead. On arrival, the building seems quite discreet as it’s sunk into the ground among the fir trees and the windows are modest, but as you walk through to the rear, the house opens up and transforms into something quite unique.”

The arrangement at the back of the new house isn’t dissimilar to the old bungalow; there’s a bedroom, bathroom, kitchen, dining and living area, but this time the emphasis is on a vaulted ceiling and sliding glass doors leading to a decked area that invites the view inside. “Out on the deck you look down and the ground just drops away, leaving a sense of feeling suspended and being in the sky,” adds Liam. “It’s wonderful to see how visitors react!” 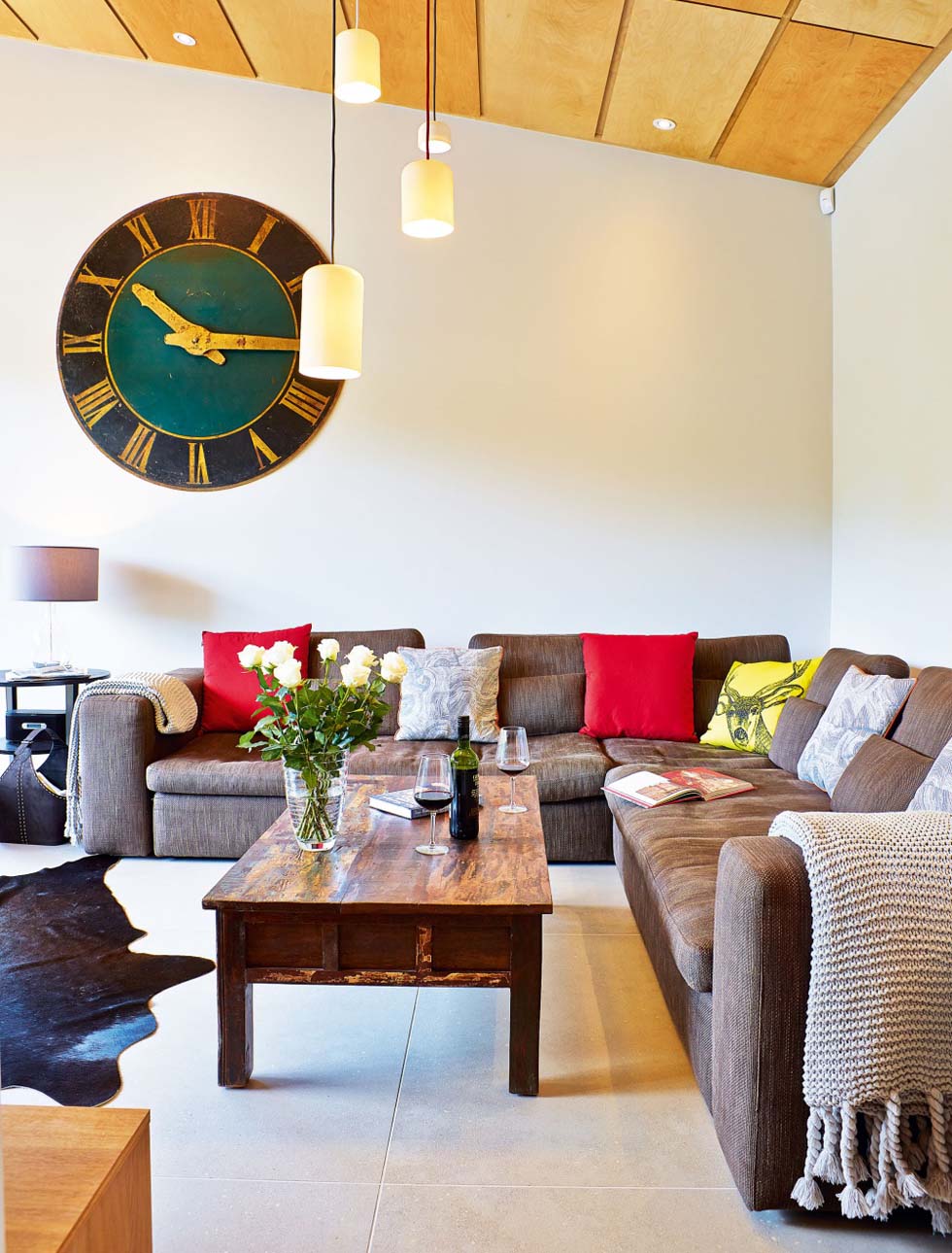 As the site sits within an Area of Outstanding Natural Beauty (AONB), the planning application had to demonstrate why the bungalow couldn’t be retained. The planners were, however, vague about how big the new home could be, simply advising that it shouldn’t be double the original size of the bungalow. Fortunately Mark and Liam’s design hit the spot first time and their planning application was approved in July 2013.

The couple had a build budget of £225,000 in mind after costing the design themselves. They selected local builders Northcott Building Contractors after being impressed with Carl Northcott’s dynamic approach and quality of work on another project. Carl’s tender came back at £235,000, but they went through a value engineering process together to lower the costs even more.

“We pushed Carl hard and he reduced the demolition cost to £10,000 but he was very good natured about it,” says Mark. “We also took out £30,000 for landscaping, and changed some other specifications.” The budget was also stretched to include solar panels, photovoltaics and an air-source heat pump; the latter is hidden discreetly beneath a tree in the garden. 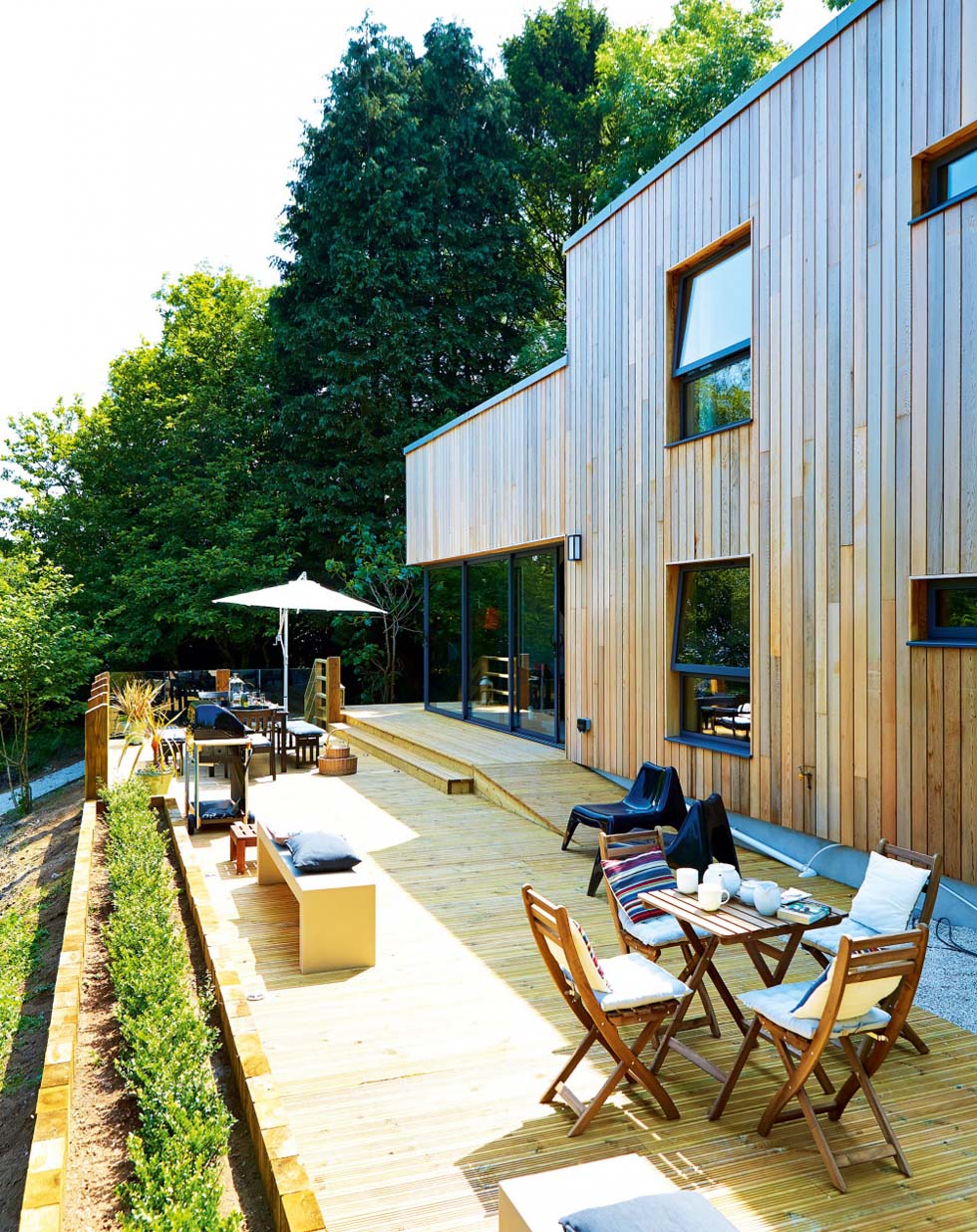 The timber decking unfolds at the back of the house with glass balustrades providing a continuous connection to the view. The powder-coated aluminium windows and sliding doors are made with triple-glazed glass and are from West Coast Windows. The deck runs along the entire back of the house where the view can be enjoyed from the living space, kitchen, and bathrooms and bedrooms too

Mark and Liam had to commission a bat survey to check whether the bungalow had a roost in the eaves. The ecologist discovered bat droppings in the loft insulation but couldn’t see any sign of bats. However, as it was clear there had been a roost in the last three years, Natural England issued a license that determined the roof had to be dismantled tile-by-tile with the ecologist on hand. “Work had to stop when he found a bat tucked into the eaves,” says Mark. “Then it was rehoused in the new bat boxes set-up on the trees.”

The license also demanded that the new house have a Schwegler concrete bat box built into the cavity between the cladding and the timber frame on the south-facing wall. “The sun warms the wall during the day and the bats fly in and out of the letter box-shaped opening,” Mark explains. “We had to leave this part of the roof free of the breathable waterproof membrane as the bats can get tangled in the loose fibres.” 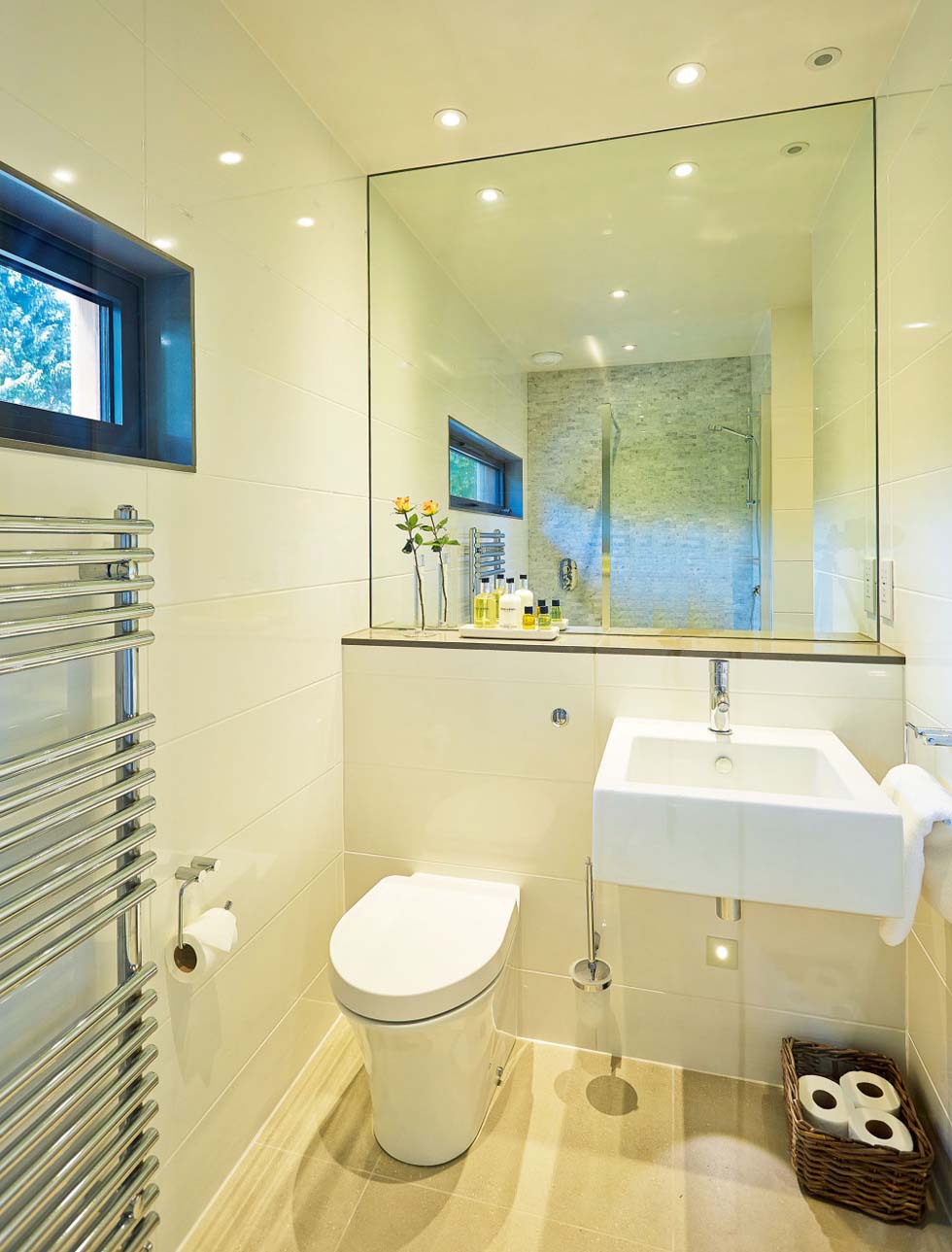 The master en suite was made a little bigger during the design phase: the doorway was pulled out to create a lobby, with space for the door to swing so inside wouldn’t feel cramped and crowded. A carefully placed linear window in the shower also provides a favourite aspect for Mark. “It offers privacy but a fantastic view of the fir trees as well,” he says

The demolition got underway in October 2013 and by December the timber frame had gone up — the house was watertight by January 2014. In just seven months the house was finished with little deviation from the budget and no catastrophes. A one bedroom self-contained annexe was also built on site, replacing a derelict garage and was achieved by reducing the costs on the house build.

The result is testimony to Mark and Liam’s constrained and purposeful design, but more importantly demonstrates how a simplified scheme can evolve into an affordable, stress-free build — without compromise to the beauty of the house. The couple conclude that the experience has given them both a great sense of achievement.

“I still can’t believe we’ve built such a lovely house on such a low budget,” says Mark. “But even if we’d had a £1million, I don’t know that we would have designed it any differently. The fir trees have given us the most spectacular and unusual view; it’s like being in a Tyrolean landscape rather than Devon! We’re very lucky.”