If you are looking for an example of how to turn an old agricultural building into a successful, light, easy-on-the-eye home, then you could do a lot worse than learn from Irena Murray’s former barn, situated in a pretty rural village in Nottinghamshire. Certainly, the previous converters could learn a thing or two.

For Irena’s home is actually a second-time around conversion. With fewer and fewer ‘virgin’ buildings on offer these days, attention is beginning to turn to the raft of first-generation conversions that took place in the 1970s and 1980s — just like Irena’s.

“I have lived in this village for 11 years and worked on four properties, and when this opportunity came up I couldn’t resist it,” she explains. “It was done in the 1980s with absolutely no imagination. It was full of nooks and crannies, had a condemned roof, and,” she gulps, “an internal bay window.” It had been empty for three years and was in a sorry state.

Not exactly setting the world alight then — and yet Irena could see the potential. “It had a very private, tranquil location yet it was still right in the heart of the village. I also saw that with a few additions and a clever remodelling scheme, it could really be a great place to live.” Luckily, with the barn already converted in an – to put it politely – inappropriate manner, Irena was in a strong position to negotiate her proposed changes with the local planners (the project was essentially treated as the renovation of an existing house rather than as a change of use) — the key component of which was a large single storey extension at right angles to the existing barn. This new space would be packed full of glass and would be in addition to new, larger openings in the existing structure coupled with a significant remodelling of the whole scheme, both inside and out. Finally, with a new courtyard created, the new garden space would be landscaped and go on to form an essential part of the new living space. 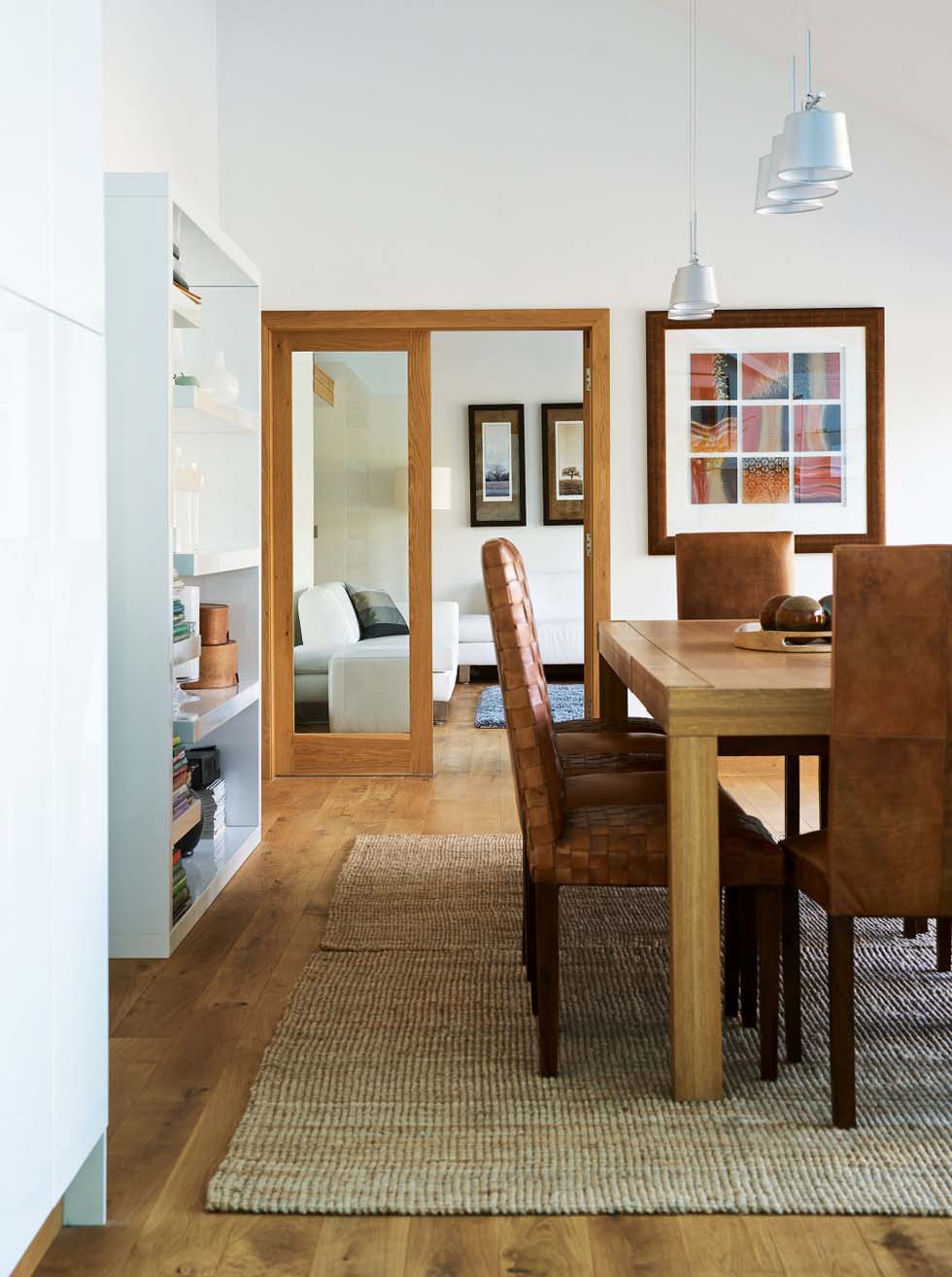 Helped by a progressive Building Control inspector from a private firm (rather than the local Building Control department), architect Irena’s innovative solutions worked out perfectly. She knew that the key to the success of the new design was to create as large a series of open spaces as possible and an open ceiling space with minimal supports showing. This was all about volume and height.

To that end, the structural focus of the new space is a mighty 12m-long glulam beam that supports the whole structure, including the glass addition. “It was a perfect solution, but it proved very difficult in practical terms — there was no space on site to get a crane in, and so we had to put in a gantry all the way round the inside of the space, get it forklifted in, and five men manually shifted it into place. I tried to keep out of their way that day!” 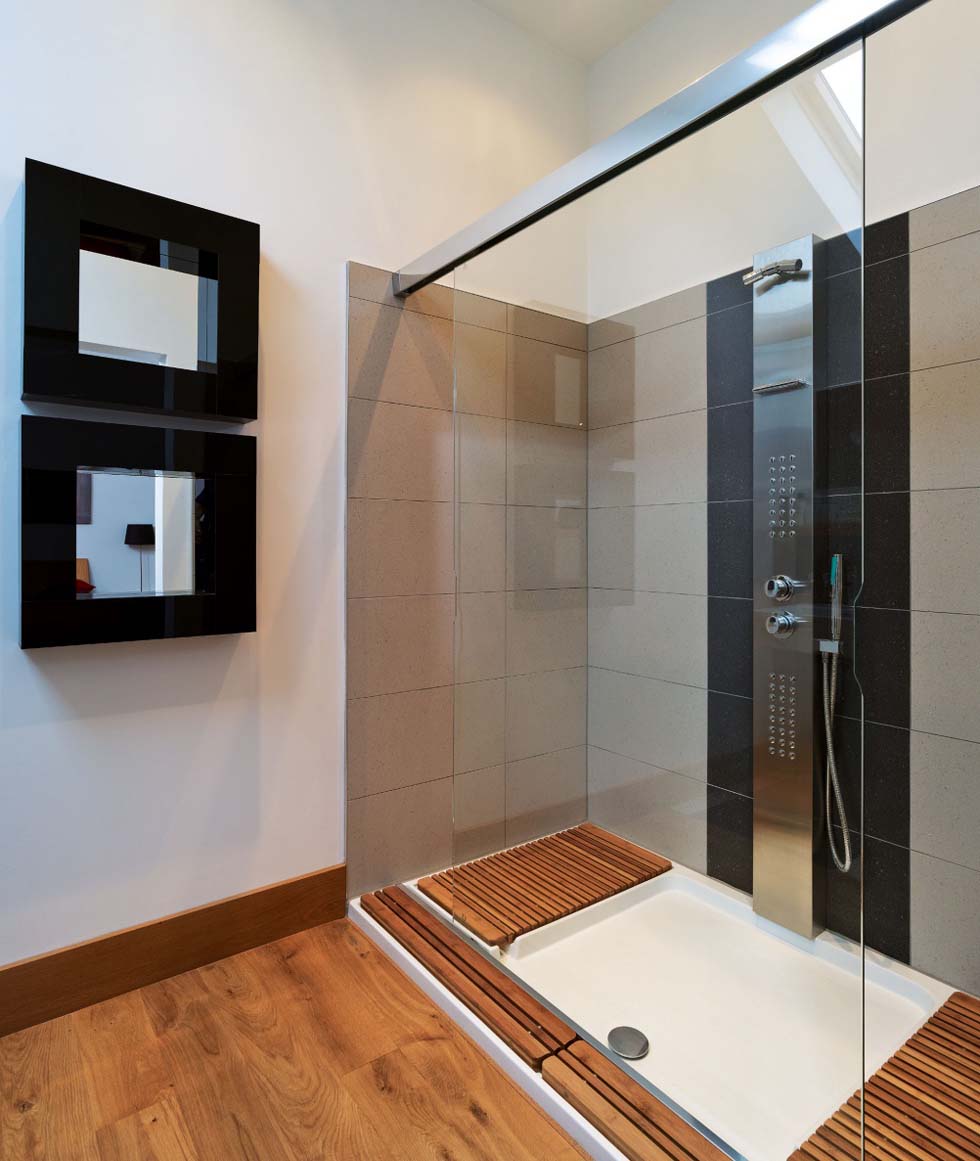 Unfortunately, the project suffered a few setbacks. The centrepiece of the new extension is a glass structure consisting of fixed panels, opening rooflights and folding sliding doors. The supplier, who Irena describes as ‘the Rolls Royce’ in its field, didn’t provide the service that she had hoped for – most notably, the frame was supplied three times at the wrong angle – and parts of the doors’ locking mechanism stick out at worrying heights for young visitors. Irena is still pretty bitter about the whole experience – “well, it was a £56,000 contract” – but the good news is that visitors to the property really wouldn’t be able to spot that this is anything other than a beautifully designed, feature-focus bit of glazing. Irena quite understandably can’t see past the problems along the way to get clarity on the finished article, but that will happen in time.

To make matters worse, two months into the project Irena decided to part company with the main contractors, and took over the project herself. Luckily, she had a first-rate contact book of local labour and materials suppliers, and so, thrust into the role of project manager, found herself on site a lot more than otherwise planned (handily, she was renting a property next door having sold her previous home). “I actually came to enjoy the experience on site, day to day, working with the subcontractors,” Irena says. “This was a project in which it was so important to get the details just right, and so being closely involved meant I was really able to monitor everything much more closely.”

This was a significant conversion project. In addition to the extension, the existing roof structure was completely rebuilt, new internal walls put in place, the existing ceilings removed to give the rooms a greater sense of volume, and, because the existing window openings have been expanded, very little of the house that Irena bought actually remains. Indeed the renovations were so extensive that she has managed to build up a new floor structure to allow for the introduction of underfloor heating (consisting of 25mm Celotex, 25mm grooved polystyrene and 9mm plywood sitting on top of the pipes, topped off with engineered oak boards). 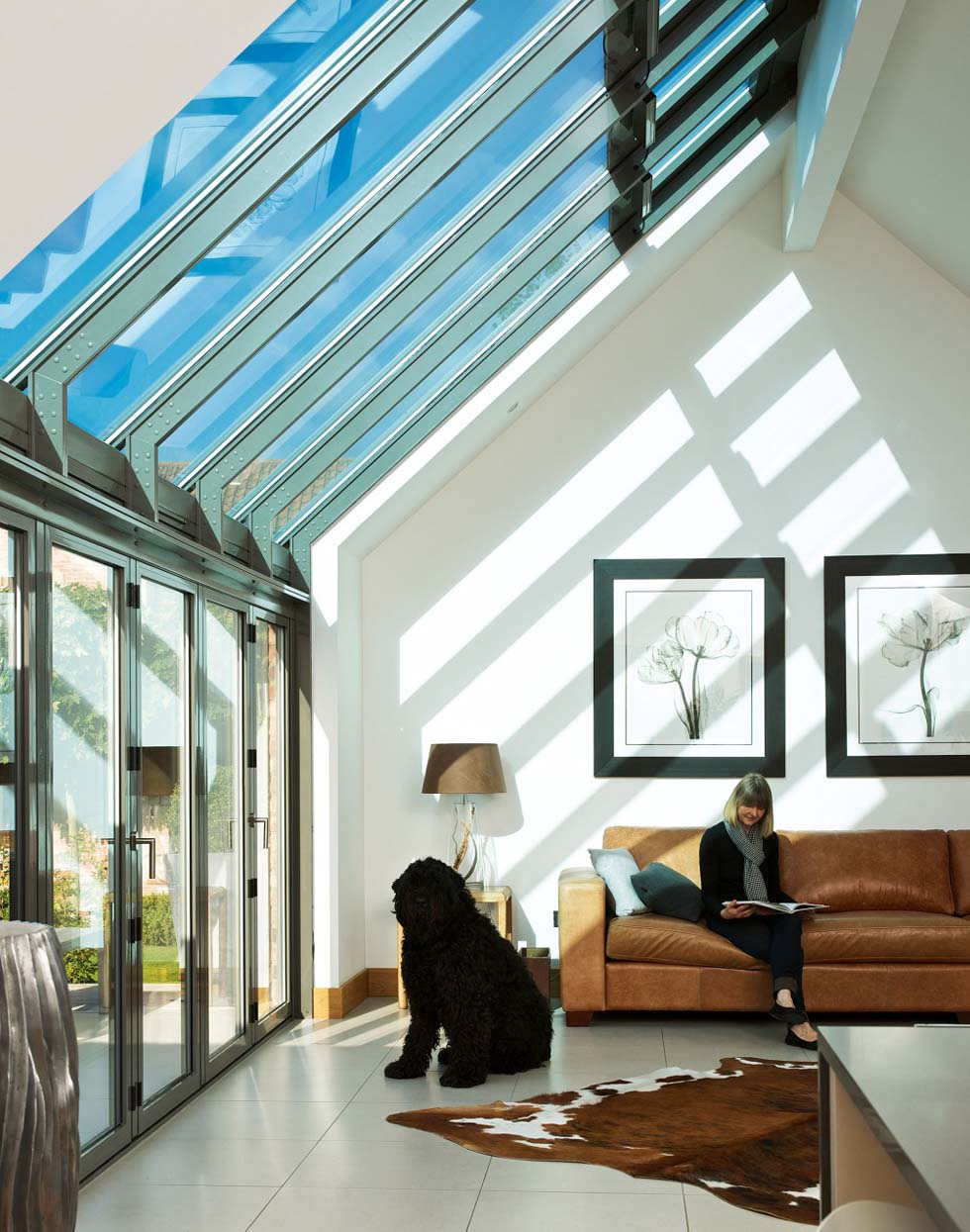 The result, however, is still full of the character that you would expect of a house shaped from an old agricultural building, but more than most it has a perfect sense of flow. Thanks to the courtyard arrangement, every room looks out on the beautifully designed gardens, which are a mix of shrewd purchase (the lollipop-style trees cost just £150 each and provide privacy without taking over the whole garden) and clever mimicry (the narrow ponds give the impression of a water garden but are in fact a form of Nero Assoluto Granite — it looks translucent but is in fact completely solid). 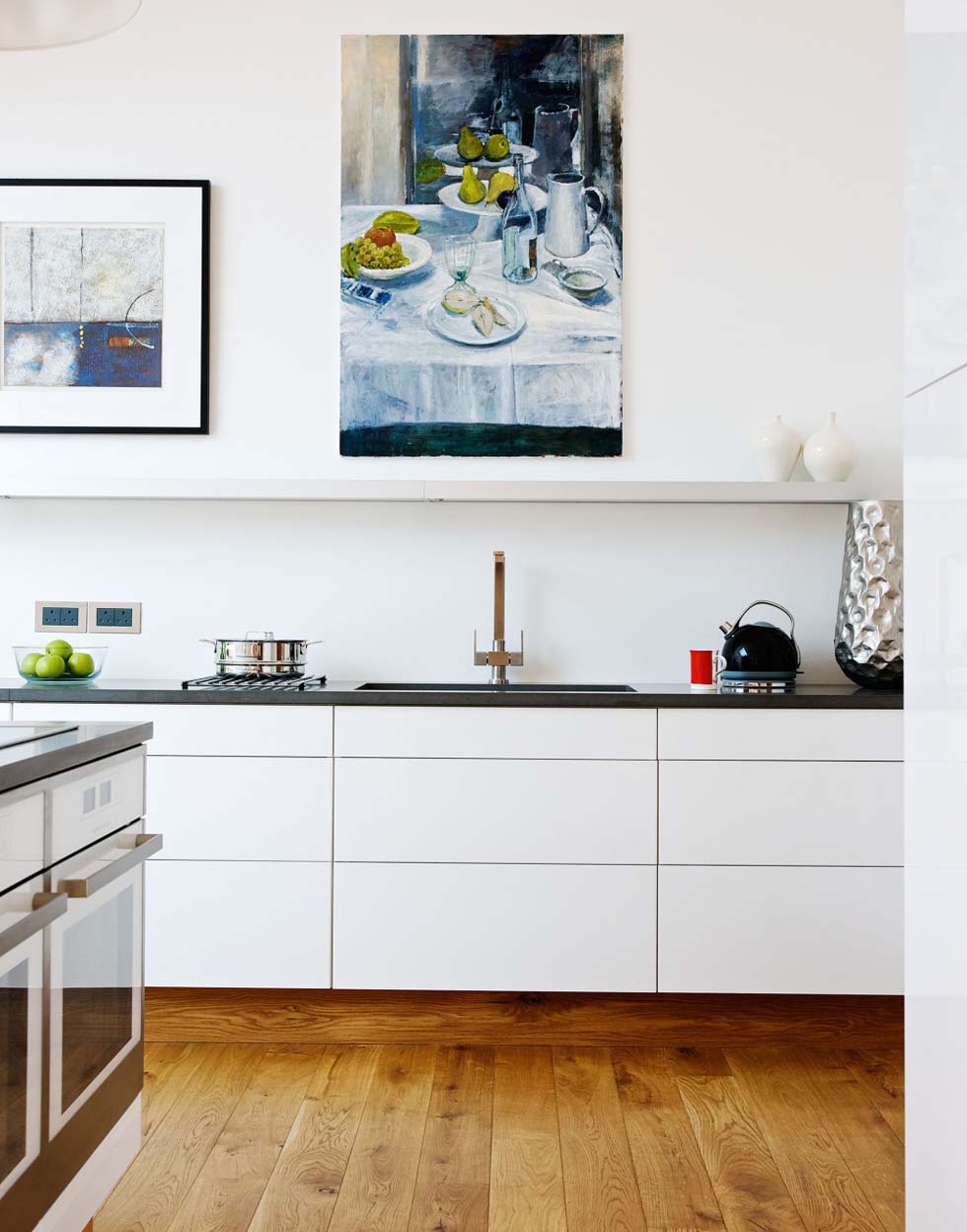 The new extension has transformed the way the home works. It houses an open sitting area that runs into a kitchen and then, into the original structure, a large dining room. Glass double doors then open into a separate sitting area, with storage built into the former ceiling space. A corridor along the rear (roadside) of the property serves the two bathrooms and three bedrooms, which open out onto the small walled pathways around the house.

“It’s a tranquil, peace­ful place to live,” says Irena. “All of the living spaces feel like they’re connected to the garden, and they are all light and spacious. It feels an awful lot bigger than the actual floor area, and I think it works very well as a modern home that retains the character of its former life.”