Last month, I explained how my wife Linda and I had exchanged contracts on not one but two adjacent plots of land in Berry Hill in the Forest of Dean, Gloucestershire. As luck would have it, Bruce Bendall, my builder friend from the area, had approached me with a view to buying the second plot to build a home for himself and wife Kathy.

We agreed to sell the plot to them for £115,000 and, in return, Bruce agreed to sign a contract to build our new home, contiguously with his own.

Making Changes to the Existing Plans

After tweaking the original design of the houses slightly to include a gable end on the front elevation to our house – with the help of Kevin Cooper, who had drawn up the original plans for the houses on the two plots – we made a full planning application to the Forest of Dean District Council. When it was validated, we were advised that a determination should be with us within two months.

Of the two plots, we chose the one on the left-hand side, as we felt this had unobstructed views to the front. It is also next door to Les and Pat’s cottage, the vendors from whose garden the plots had been carved. An additional factor influencing our choice was the continuing opposition to the development from the occupants of the bungalow on the other side.

Our revised planning application, therefore, showed the new design with the gable end to the road-facing elevation, which reduces the visual mass of house. The application also changed the garages for both houses to cart barns with low-pitched pent roofs, which opened up the space between the two dwellings. 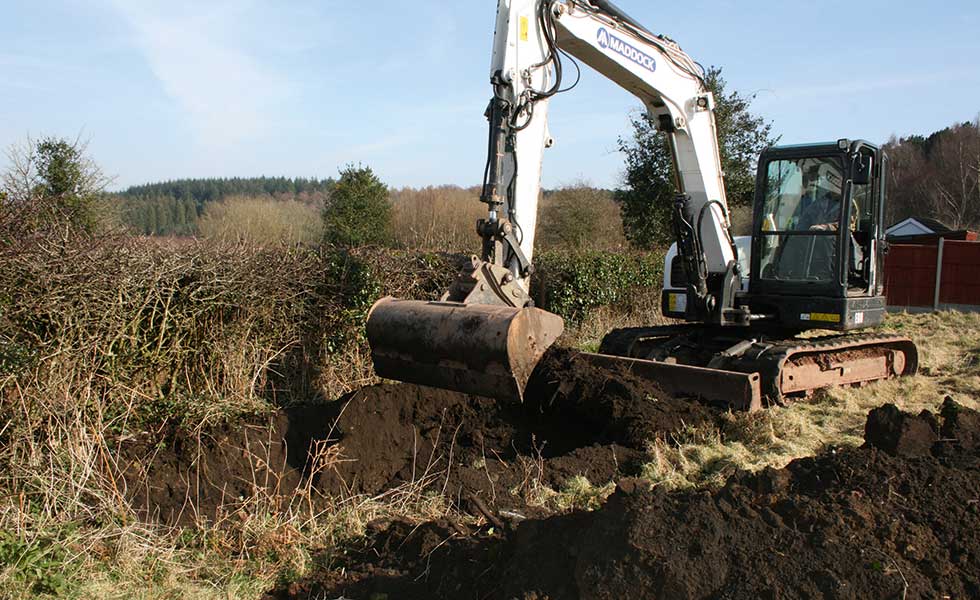 Work Begins on Site: with planning permission approved, work starts on David’s site. Diggers arrive to move the topsoil to be stored off site, to be used at a later date or sold

Crucially, the application made no alterations to the right-hand property, on the premise that if that house remained the same as that which had already been granted, there would be less scope for any valid local objection. Unfortunately, that proved to be a false hope.

I stayed quiet for the first three weeks but kept an eye on the council’s website. Then a couple of weeks later, the Parish Council posted a comment stating that they would be making representations. A week later, I was flabbergasted to read of their objections, which basically re-ran all of their previous objections to the site being developed — paying no heed to the fact that a planning consent already existed.

They maintained that the site was outside the settlement boundary and represented an unwelcome intrusion into the Wye Valley Area of Outstanding Natural Beauty. Was this true?

I rang designer Kevin Cooper and he explained that technically the site was outside the settlement boundary but that the previous consent had been granted on the basis of the land being within the District Council’s ‘emerging allocation’. “In any event,” he stated, “it’s got consent already — you could start work tomorrow afternoon on the basis of the existing consent.”

That objection was swiftly followed by one from the occupants of the bungalow next door, citing the fact that the two houses would spoil their view across the plot. Worryingly, they also disputed the traffic survey, which we’d copied from the previous application, stating that the traffic on this narrow lane was much heavier than we were suggesting.

I spoke to the planning officer, and he didn’t seem fazed. I explained that we’d not altered the plans for the house on the second plot in order to invalidate these types of objections. I also informed him that once we’d got planning we intended to make a change to the plans to reflect Bruce’s wish for plain tiles on the roof instead of interlocking concrete, and stone and render instead of brick. “Change it now,” the planning officer advised. “Let’s get it all settled in the one application.”

Shortly afterwards I submitted the revised plans, and all we could do was sit back and wait.

Starting on the Building Site

Meanwhile, Bruce and Kathy sold their house within 24 hours — at a higher price than they’d hoped for. Linda and I also decided that we, too, would sell up and move to the Forest of Dean to be on hand for the build. Our house in Kent also sold within 24 hours, and for £10,000 more than we’d expected.

We had further good news when, on the date they’d originally set, the Forest of Dean District Council issued the planning approval — and we were free to start on site. As the low loader let down its ramps and the digger rolled backwards off it and onto the plot, Bruce turned to me and said: “You’re grinning like a Cheshire cat.”

“That’s because, even at 70 years of age and with this being our fourteenth self build, I get just as excited now as I did in my early twenties when we built our first home,” I replied. The hedge to the front of the plot had to be taken out to facilitate the new driveway and the plan is that a new one will be planted at an angle to create the visibility splays.

Bruce had the idea to dig a trench behind the existing hedge and then pull it into a new position. But it quickly became apparent that this wasn’t going to work — the old hedge was only held together by a mass of ivy. 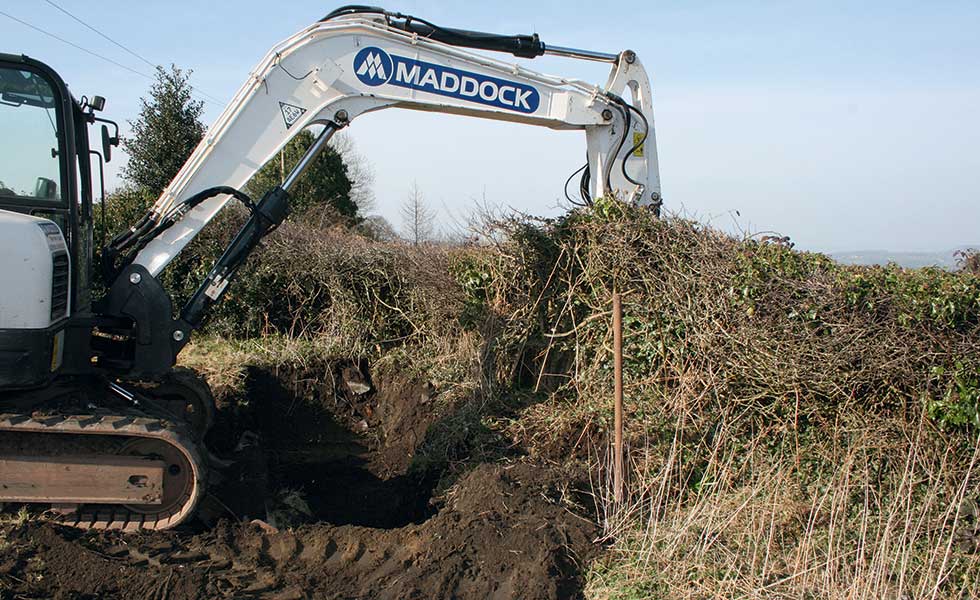 A huge pile of topsoil soon accrued too, and we sent for a dumper, which arrived within half an hour. This enabled us to move the pile of topsoil through the back gate and store it, off site, on the forest land at the rear, from where we can bring it back, when required, or possibly sell it. The pile looked huge but we knew it would likely shrink quite rapidly as it weathers.

We quickly got down to a level of subsoil, which proved to be hoggin (a mix of clay and sand which binds together) mixed with shale stone. That wasn’t going to be sent away either. It was perfect for the driveway and it would be perfect for the oversites of the two houses. By the end of the first day, the site looked completely different.

The rest of that first week we carved out the driveway and created the level plinths of the two houses and the associated cart barns. Les and Pat, from whom we bought the plot, had watched proceedings and were concerned at just how deep we’d appeared to have gone. But we explained that things are deceiving at this point as the floor levels will be higher.

Next month: David begins excavating and pouring the concrete foundations