As far as package builds go, Fox Furlong – the new barn-style home of Robin and Miyuki Walden in rural Gloucestershire – is quite different from anything that has been done previously.

Thanks to the open-minded creatives at German supplier Hanse Haus, along with the vision of Cotswolds-based architect Renato Lusardi from Studio Lusardi, the couple have a striking Cor-ten steel and timber-clad new home. It’s sympathetic to its sensitive location too, taking the form of a contemporary barn.

“Our journey first began when we went to one of the Homebuilding & Renovating Shows, as we were interested in self-build after a friend of ours had done it. I spent two years looking for a site for us and knew we also needed an outbuilding to be used as a workshop for Robin’s ceramics business. After viewing another property in the village, the estate agent then showed us a 1960s bungalow and when we walked round the woodland site we were instantly charmed and made an offer,” Miyuki explains.

Visiting the Homebuilding & Renovating Shows, the couple had the opportunity to speak with various package suppliers and immediately realised that this was the best build route for them, offering both a hands-off approach and an energy-efficient home that came with the added benefits of a quick build time and a fixed price.

“The great advantage of the prefab system is that you are also much more aware of the final cost than you are with building the usual way. This was, for us, a massive plus,” Robin says.

“While Hanse Haus built the home, it was crucial we had our own architect as the planners insisted we respected the local Cotswolds style. Our architect Renato got it spot on. Once he had done the sketches he sent these off to Hanse Haus,” says Robin.

In order to appease the local planners, the Waldens’ architect designed the home to take its cue from the nearby agricultural buildings, using Cor-ten steel cladding. 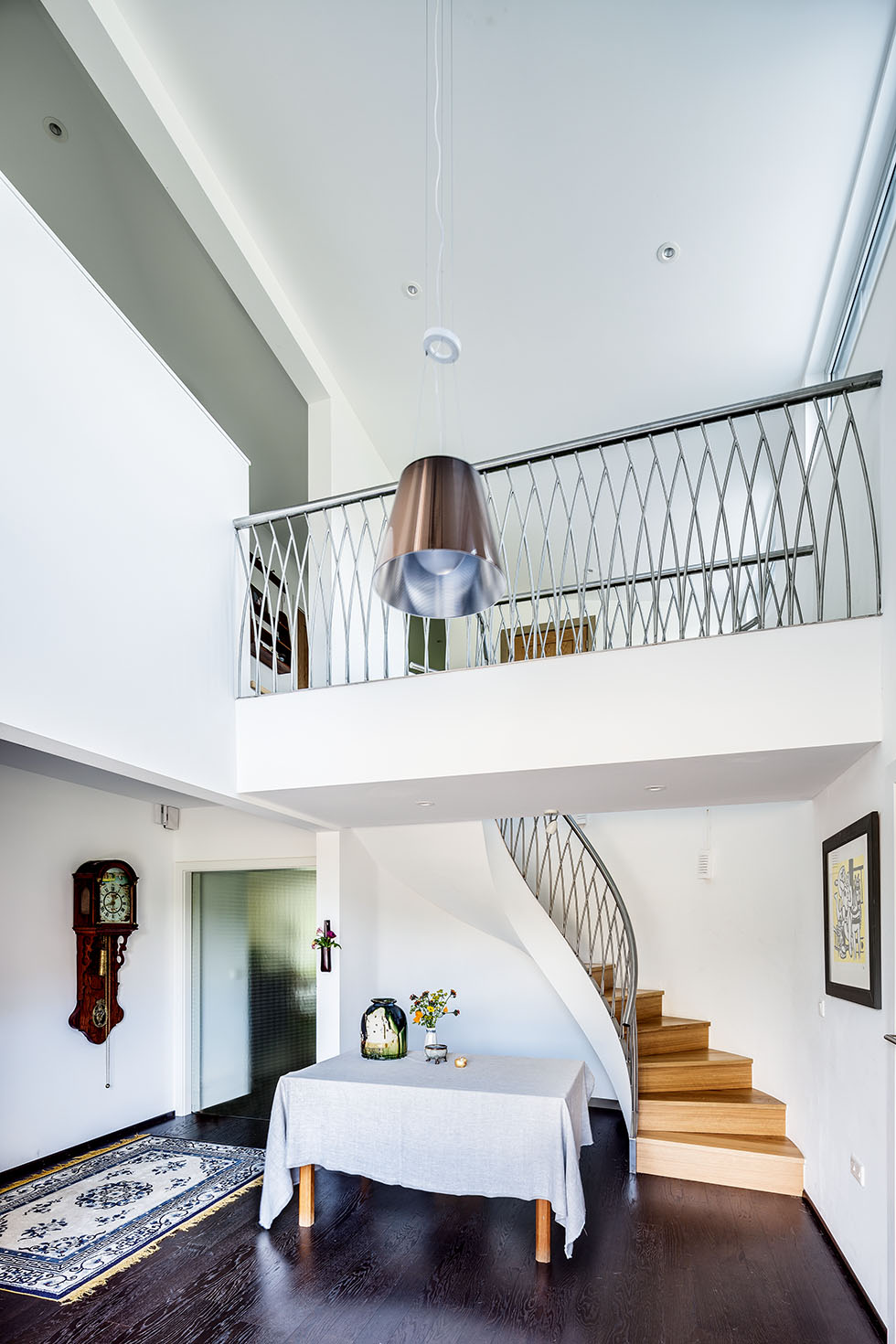 “We really wanted something magical in the hallway and so I looked for a specialist staircase designer who I found with M-Tech,” says Miyuki

After flying out to visit the Hanse Haus factory in Germany to choose their fixtures and fittings, the house, in true prefab style, was built in the company’s factory before being shipped over and erected on site. “The lorries arrived on 17 March 2013 and the roof was on within five days — we were moved in at the end of July.”

“We lived in the bungalow on site during the project to oversee everything,” says Miyuki who acted as lead throughout the build, with Robin acting as “tea-boy” (his words!). “Living on site is such a good idea,” he adds. “It was great to watch everything go up and to be there if anything was needed — although the team were so organised in knowing every detail of what they were doing I think they only asked us eight questions during the entire project!” 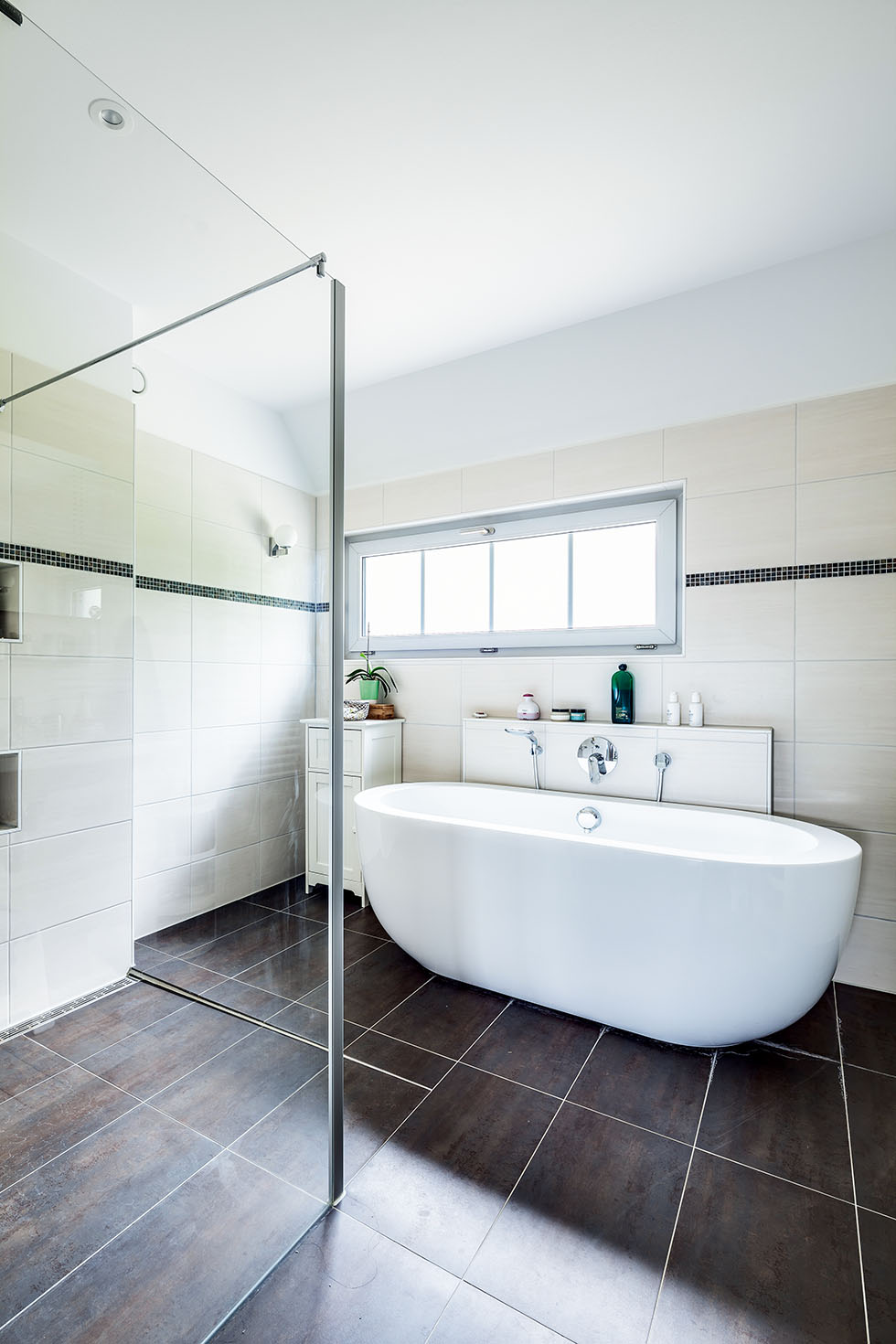 Energy efficiency was a top priority for Robin and Miyuki, and the house has been packed with eco technology to keep costs down. A total of 16 photovoltaic panels line the south-facing roof, a borehole provides water, an air-source heat pump takes care of the home’s heating and hot water, and a ventilation system keeps the temperature of the home constant.

Underfloor heating throughout provides comfort against the wood flooring, while triple-glazed windows along with masses of insulation keep the home airtight. 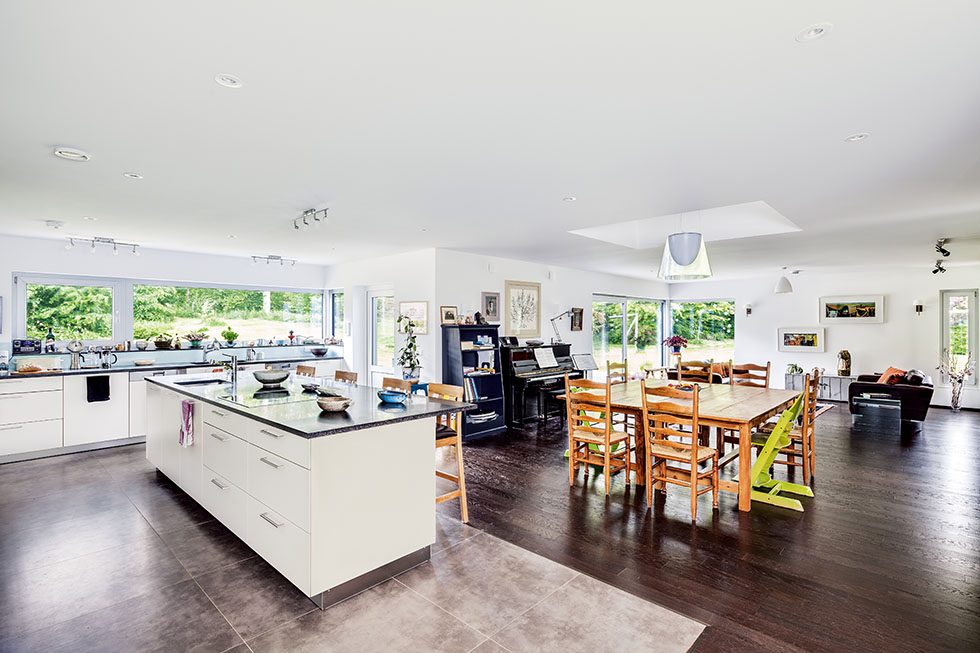 The large open plan kitchen/dining/living area acts as a functional yet homely space. An impressive floor-to-ceiling corner window at the far end overlooks the garden and wood, and a long window over the kitchen also gives a panoramic views. The kitchen has been designed to house the large island (where up to eight people can be seated for Miyuki’s cookery classes). There’s also a spacious walk-in pantry (not shown here) which provides plentiful storage too 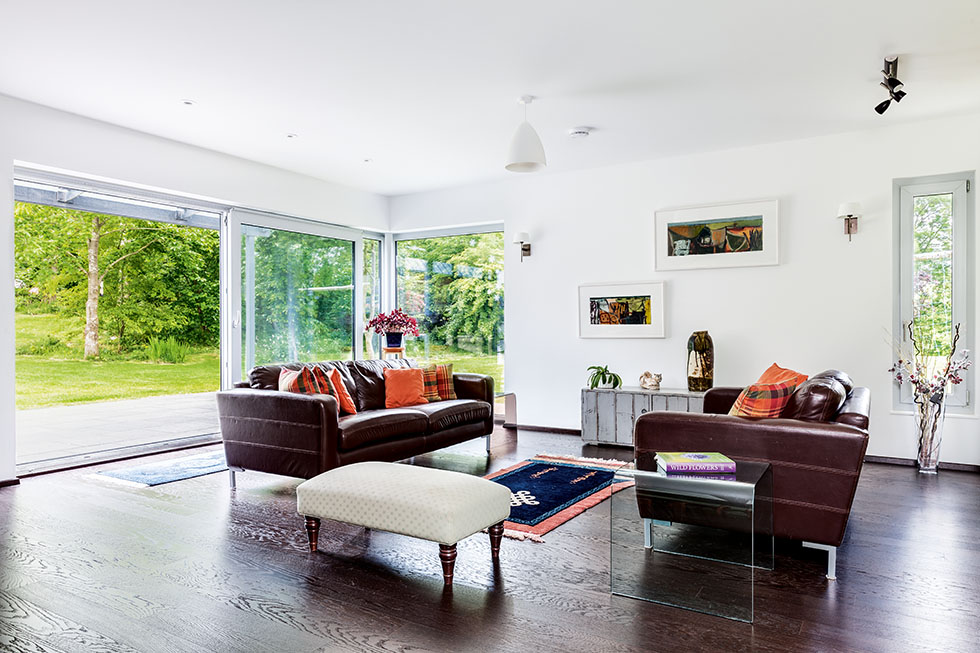 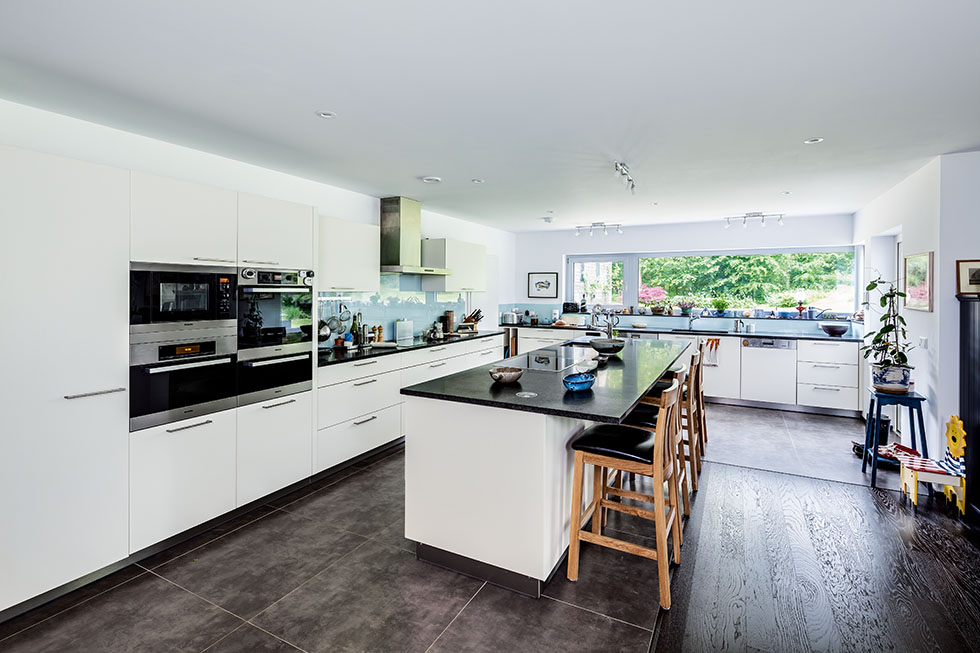 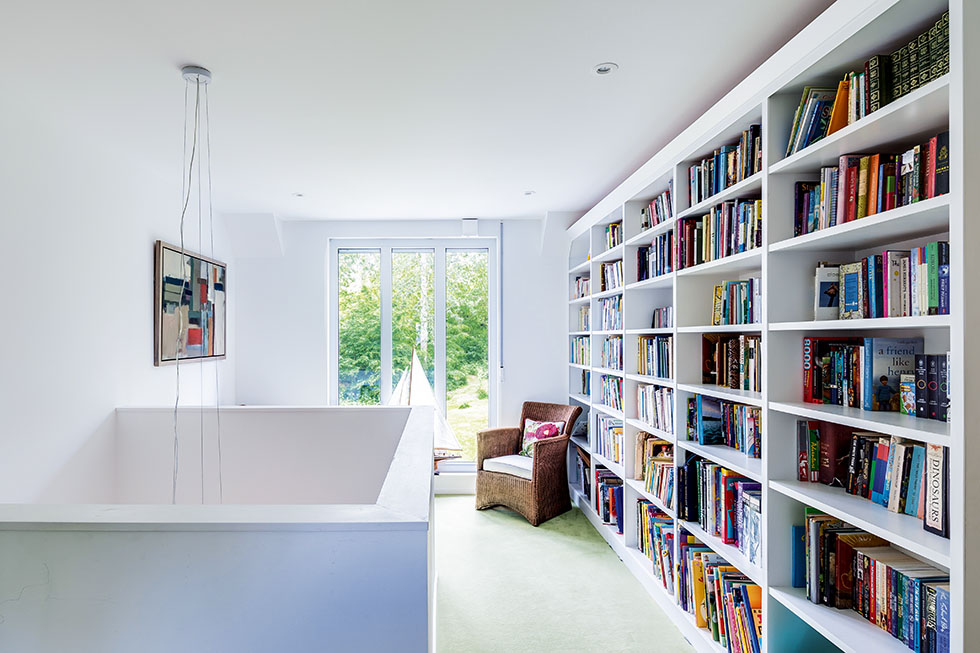 The interiors feel spacious thanks to open plan arrangements as well as voids in the hallway and in the kitchen – lifting the ceiling creates interest, while also providing means of communication when the kids are calling downstairs. 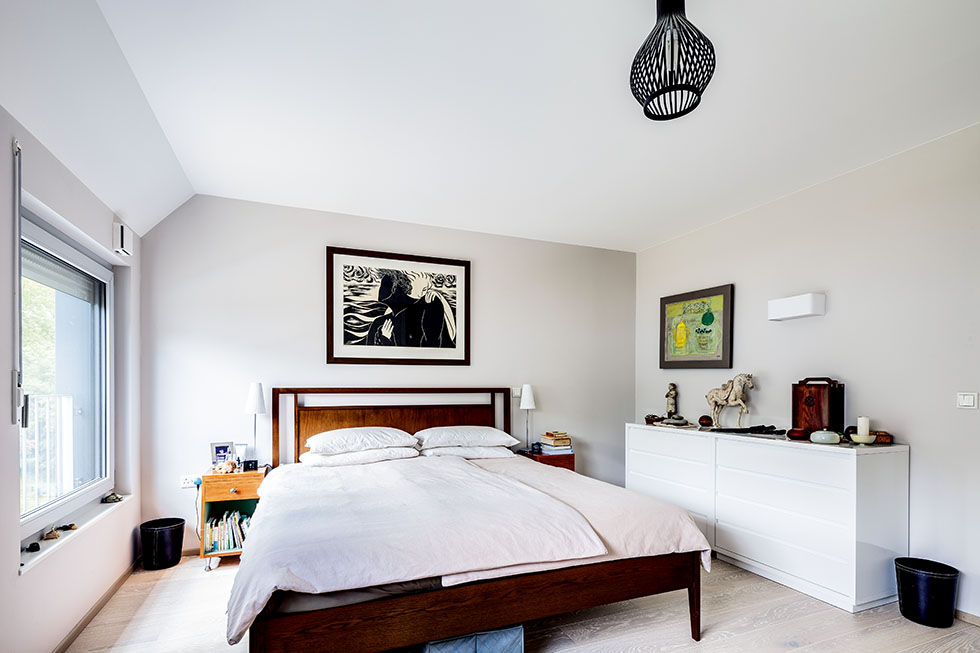 Situated off the galleried landing, the master suite features a large wetroom complete with separate WC. 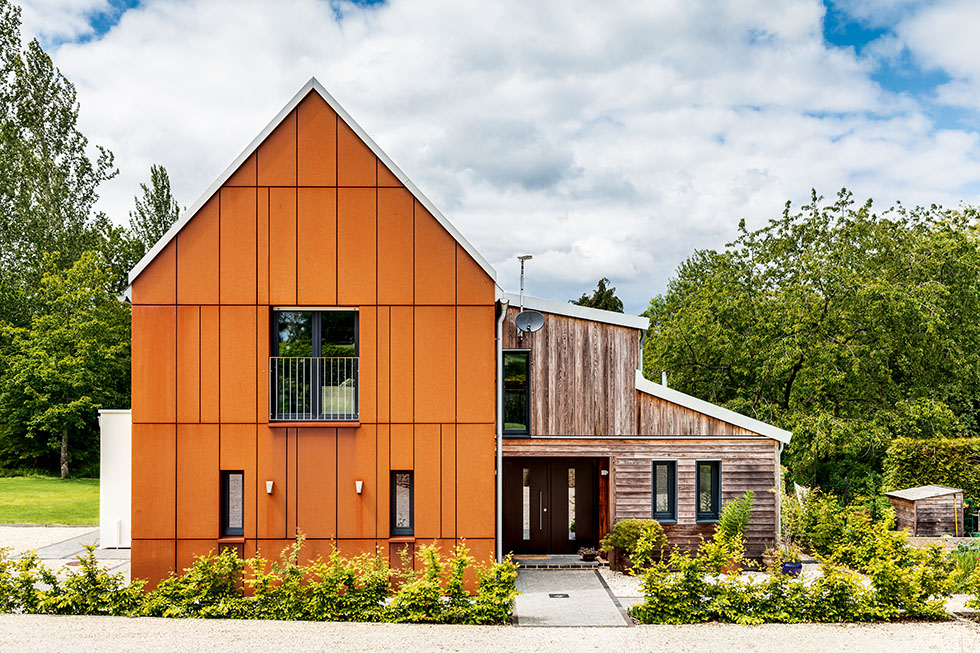 The contemporary home takes its cue from surrounding agricultural buildings, both in form and in cladding materials, and as such, appeased the planners in this stone belt region. 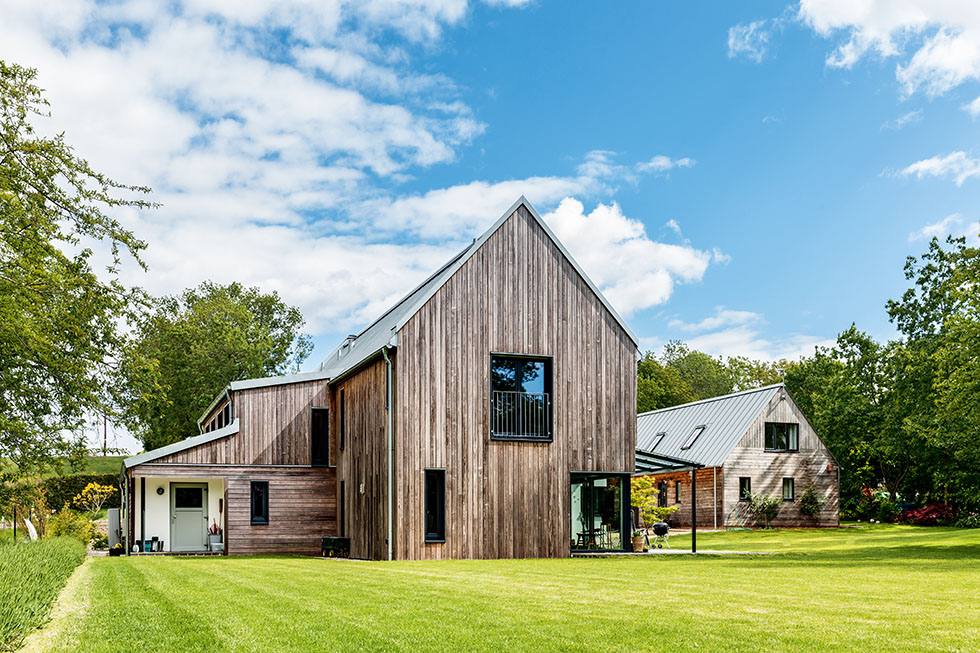 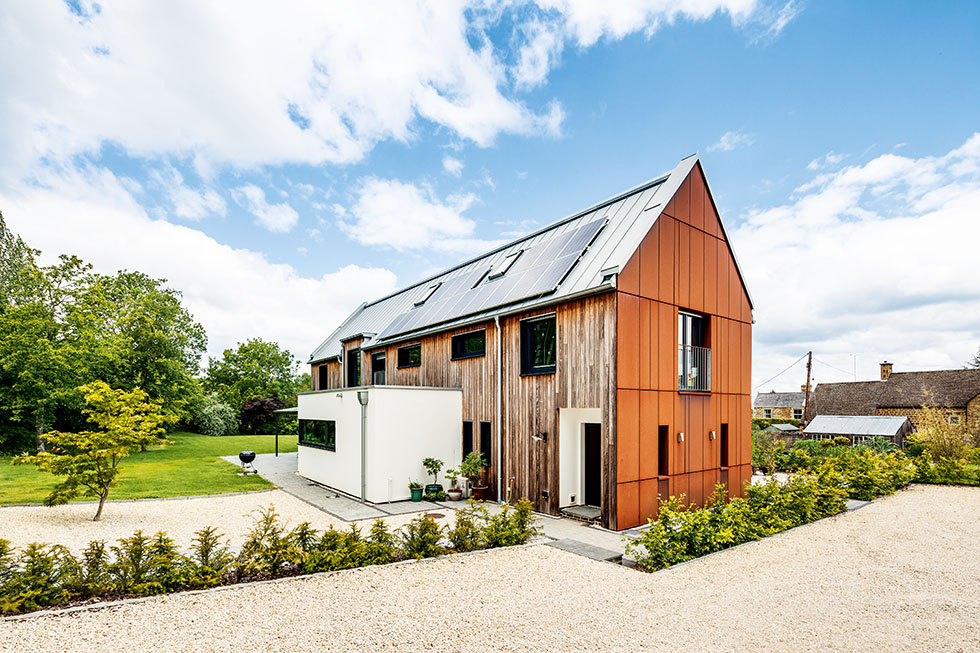 Cor-ten steel clads the front elevation; Kebony timber, left untreated to weather to a silvery grey, and white render have been used to clad the rest of the house under a pitched zinc roof. 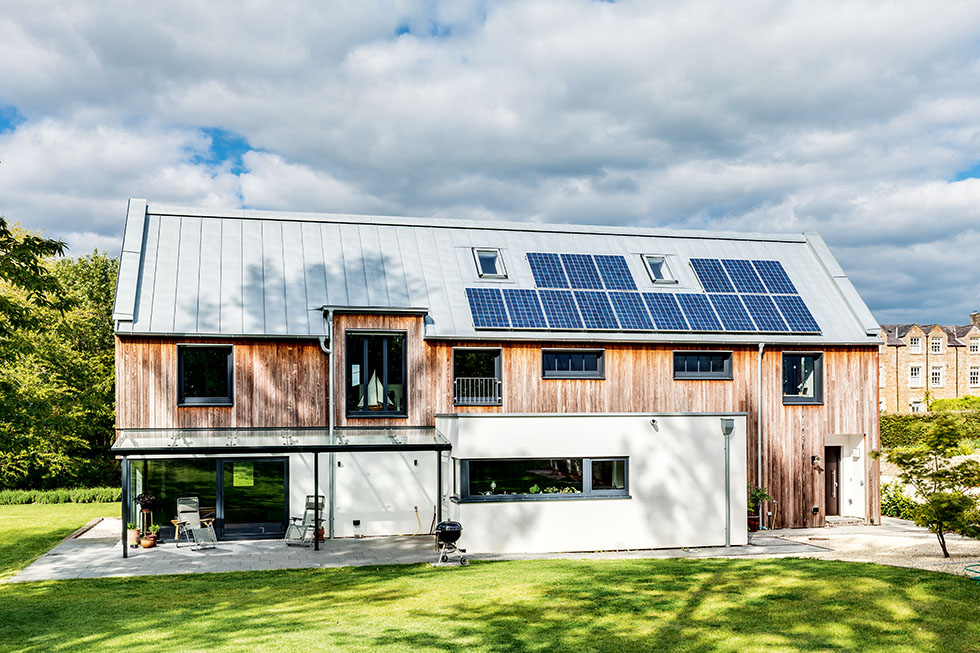 A 16 photovoltaic 3.8kW panel array has been installed on the south-facing pitched roof to generate electricity for the house.