Nestled in a quiet village in the Hampshire countryside within the grounds of Merula’s former home, this stunning pre-fabricated timber frame home from German supplier Baufritz has successfully achieved a blend of contemporary styling that remains sensitive to the Conservation Area location — yet for self build novice Merula and her husband Richard, this was not to be a straightforward journey.

“We moved into the village and into a Grade II listed home in 1977 from London as I hankered after the countryside. As our needs changed over time and the six bedroom home became too large we thought about downsizing,” explains Merula. “With such a large plot and not wishing to move from the area, we decided we’d like to split the land and build next door. We engaged a local architect and in 2004 the planning officer came round for an inspection as we’re in a Conservation Area and the land we were building on was also within the curtilage of the property.”

“The local architect who did the initial drawings however wasn’t up to date with sustainable ways of building, which was important to us. In any event, the village objected our plans leading us to rejig them, but then the Highways Agency objected. It went to appeal which took two years and then the appeal was upheld. Then, in 2008 we were about to go to tender with the project but I wasn’t happy — I knew in my heart that it wasn’t the house I truly wanted.”

Tragedy then unfortunately struck when Merula was sadly widowed following a road accident. “I drew a line under everything and then, in 2011 when it came to moving forward with the project and renewing the planning consent or leaving it, I took the decision to continue with this dream Richard and I had shared. But I knew I wanted a different design and liked the idea of using a package company who provided a turnkey service and who I could completely trust as I was naïve about the building process and needed people who could hold my hand.”

For Merula, it was important to find a supplier whom she could trust to guide her through the whole process, which Baufritz provided. “I was clear on the brief I had and rang Baufritz and spoke with architect Robert Lumme for about an hour — I knew from everything he said that it was ticking all the boxes for me,” she explains. “He came out to see the plot [which was still the tennis court for Merula’s former home at the time] and I interviewed him.”

“I went to see some of their different styles of houses to get ideas and we achieved planning consent easily in mid 2012 as the final house was a lot smaller than the original architect had drawn up. I engaged a local project manager for the elements that Baufritz were not responsible for — including the oak frame garage and carport, which was from Oakwrights.”

With the garden being an important factor in the overall scheme, garden designer Hannah Genders began work on site before building commenced, with landscapers then coming in November 2013 through to July 2014 to put in place the designs Hannah had prepared. 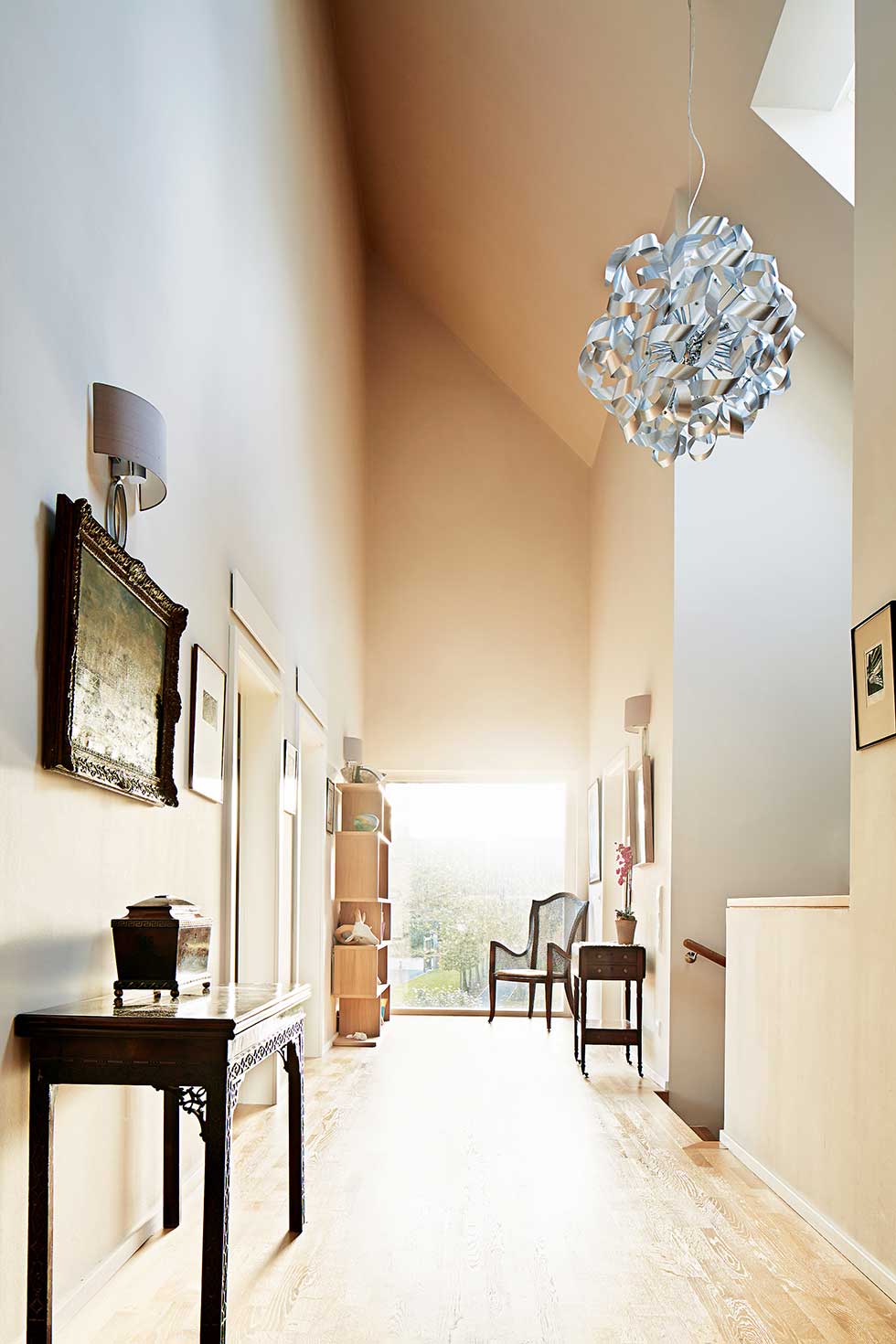 A skylight brings further light into the upper level of the house. Three large guest bedrooms (one en suite) and a family bathroom lead off the hallway, as well as the generous master bedroom complete with dressing area, en suite and a Juliette balcony

Once Baufritz arrived on site with the house, the building was watertight in four days. “January we broke ground, the concrete slab went down in March, the house arrived on 9 April and in September Baufritz handed over the keys — I moved in, in November; it was as simple as that,” she says. 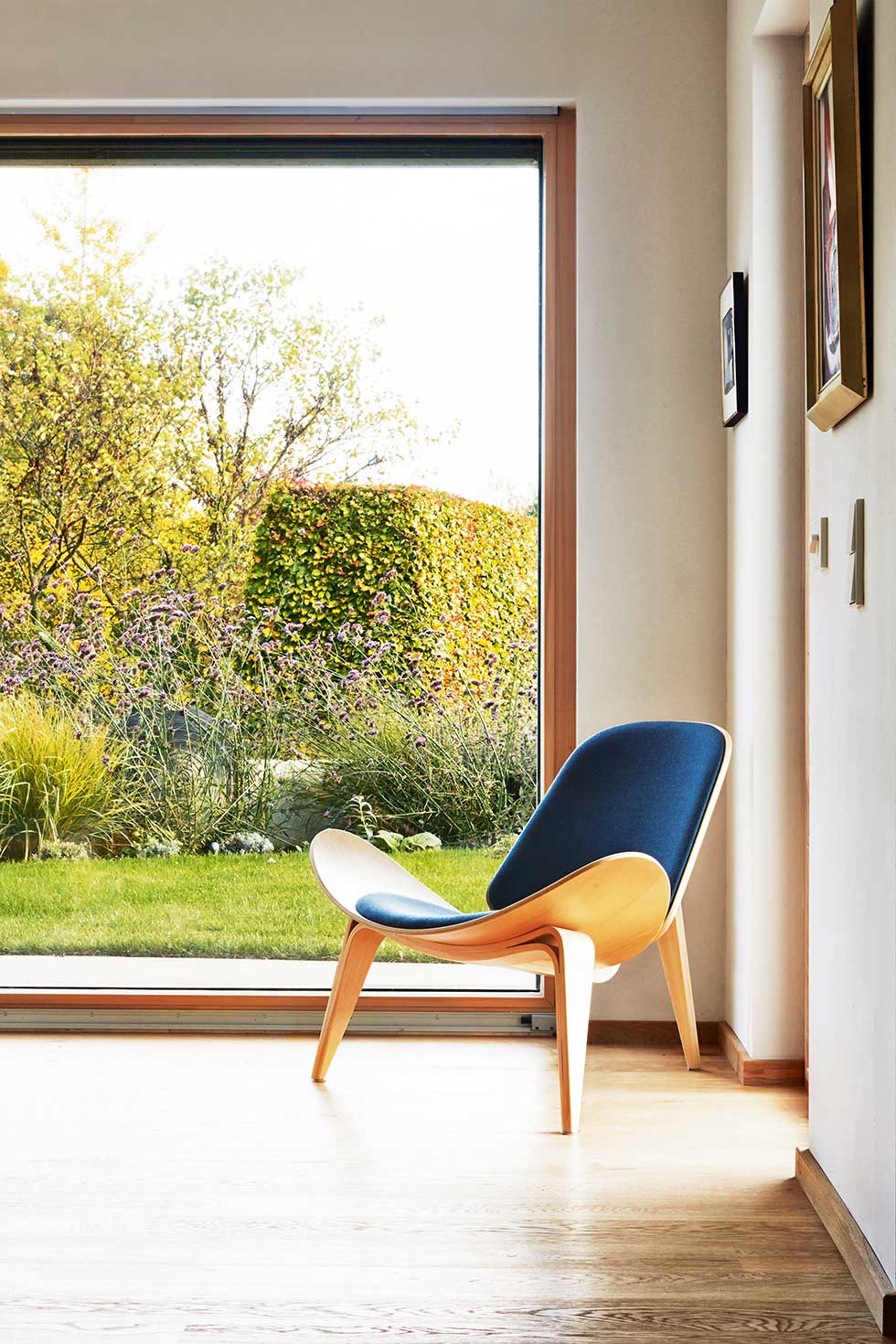 Not wishing to “live in a goldfish bowl”, Merula specified picture windows and sliding doors as opposed to bi-folds — allowing for wall space to hang pictures and place furniture

Another draw for Merula was the company’s sustainable building methods, and renewables have been included where possible. “The local council said we needed to have 25 per cent renewables but we couldn’t have solar panels as we were in a Conservation Area,” she says.

“Luckily Baufritz build a lot of energy efficiency into the building itself with insulation. The home also has a ventilation system as well as rainwater harvesting — although not for the toilets.” A HWAM log burner with 4.5kW heat output takes pride of place in the family room for added warmth when required. 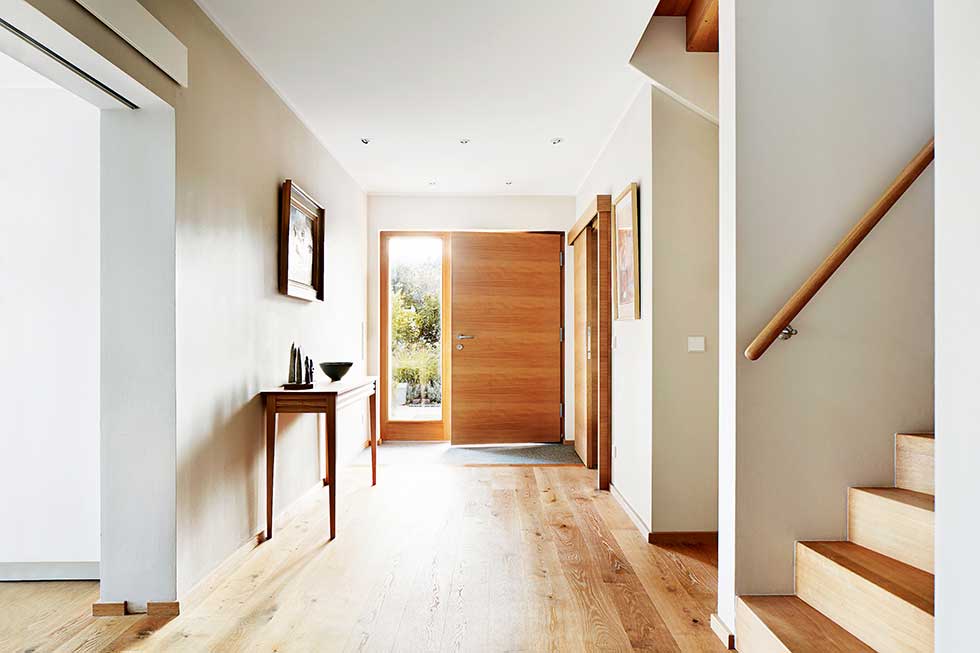 With a view to creating circulation space, both the entrance hall and first floor landing are generous in size — the hallway measuring 2m wide. Natural light has been maximised here too, with picture windows to the side of the front door and on the landing above the entrance 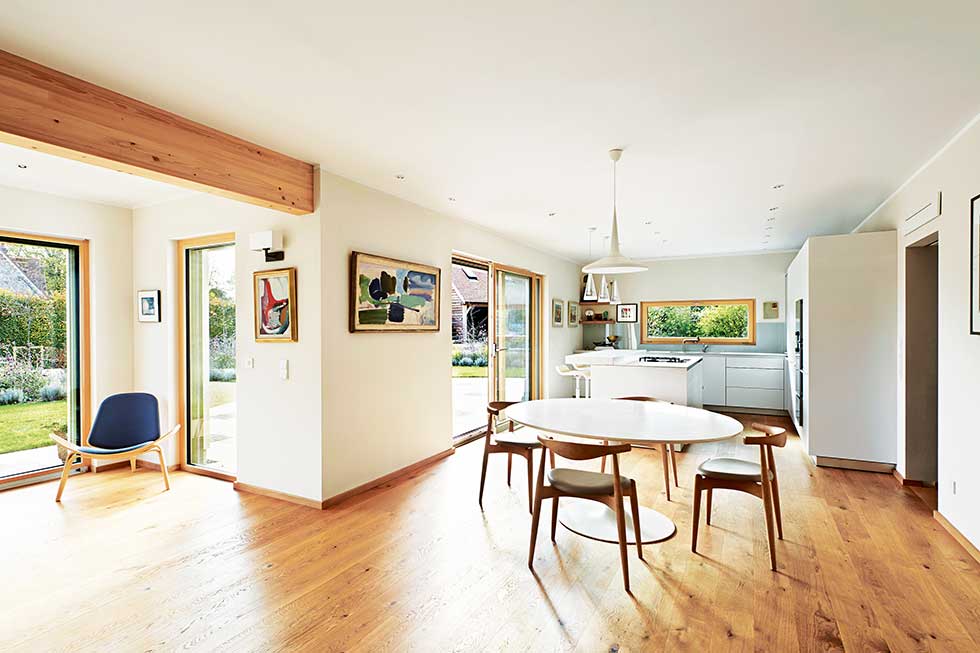 The floor to ceiling glazing in the open plan kitchen/dining/living space does however make the most of the garden views and features built-in tilt and turn blinds which offer a clutter-free solution to the interiors, whilst also allowing the house to be shut off from the outside when no one’s home. “This is where I spend the majority of my time and it’s a great space for when the family visit. I also knew I wanted a Bulthaup kitchen, and they were brilliant at designing the perfect kitchen for me,” says Merula 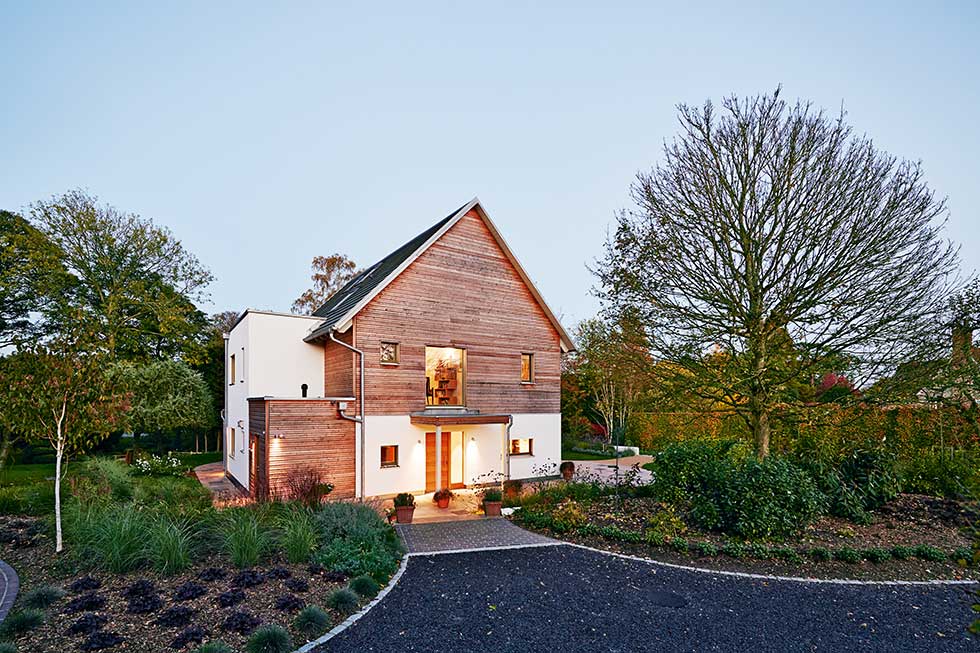 In order to respect its Conservation Area setting, this package build takes on a barn-style form with pitched roof and use of larch cladding to break up the white render. Olive green window and door frames give a nod to the gardens that envelope the building. In order to take in the garden during the evenings, LED strips light up the outdoor steps at night, with other lighting cleverly placed around key garden features to draw interest