“This house was designed by the planners, titivated by the architect, modified by neighbours and paid for by me,” says James Joll of his new Georgian-style home in Wiltshire. It’s a funny quote, but it’s not entirely true. James underdoes his own satisfaction at the outcome, and downplays the achievement of the project’s brilliant architect, Alex Oliver (www.aoassociates.co.uk).

People have all sorts of motivations for building their own house — usually based around grand design ideas or wanting to, rather more pragmatically, build their way up the property ladder.

James’ main reason to do this was because he wanted a house that was relatively modest in scale and yet had impressive ceiling heights — somewhere that could act as a sufficiently receptive space for his collection of 17th to 19th-century art and furniture. For James is a collector of things — and not just the stuff you might find down your local art gallery. The house was second to the art (good for him).

James is also lucky enough to be able to invest £100,000s in a house in which he and his partner Annie live side-by-side with furniture and art — but that doesn’t stop the house being brilliant in so many ways as an example of how new builds can be fully authentic replicas of a certain style. “Form has most definitely followed function for us,” says James.

“I used a property finder, and placed an advert in a local newspaper,” begins James. “Luckily for me, three nephews had inherited an old wooden bungalow on a 1.5 acre site and wanted to sell. I bought it subject to planning consent being achieved for what I wanted.” James found Alex Oliver, who is locally based but has a national reputation for being that rather unusual architect — someone who does both contemporary and traditional styles perfectly. 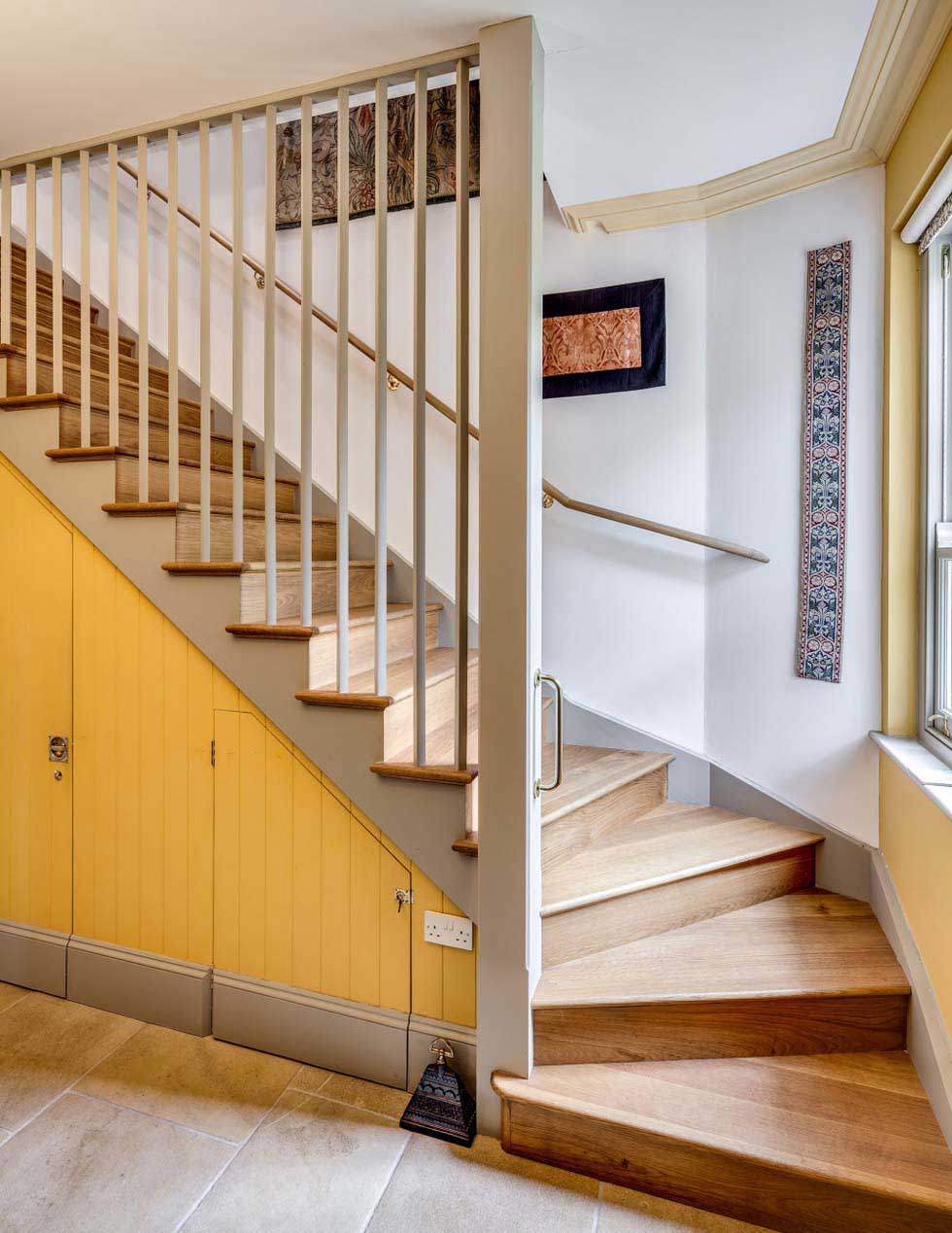 It was traditional that James wanted, and the brief was for a modestly sized and scaled Georgian-style home with space for art, generous ceiling heights and high-quality, authentic detailing in a mix of the two local building materials, brick and flint. To say Alex delivered is something of an understatement — this is one of the most impressive examples of the difficult art of traditional new build that has been built in the UK in recent years. 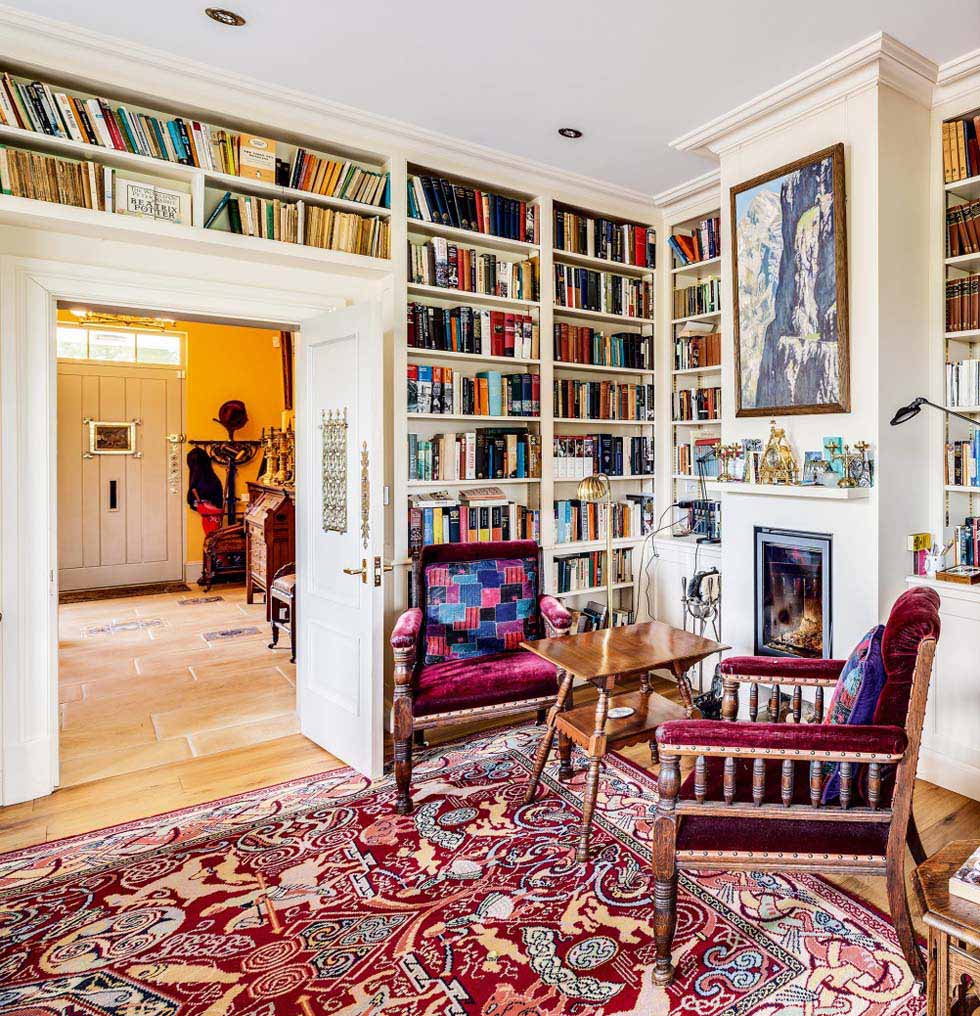 Flexibility is the key to the downstairs layout. The kitchen can be shut off or opened onto a cosy book-lined snug through double doors. The snug itself is separated out from the hall by double doors, meaning the space can be very open or completely closed off

For James the result is the perfect mix of modern convenience and traditional style. “Having lived in very old homes, the benefits of new builds are certainly impressive, with underfloor heating and high comfort levels,” he says. “The great thing here is that we have achieved all of those things in the context of traditional style. It really does genuinely feel like an old home. The ceilings are three metres high, the cornice detail is exacting, and of course the finishes give it every sense of having been around for years.”

The house fits beautifully in its surroundings too — the fishscale tiles on the roof are a nod to the pattern on the church across the road; the incredibly thin mortar joints to the new (Michelmersh) bricks are perfectly specified and show how Alex and James have gone beyond the usual requirements of those attempting to invoke traditional styles in a new build. 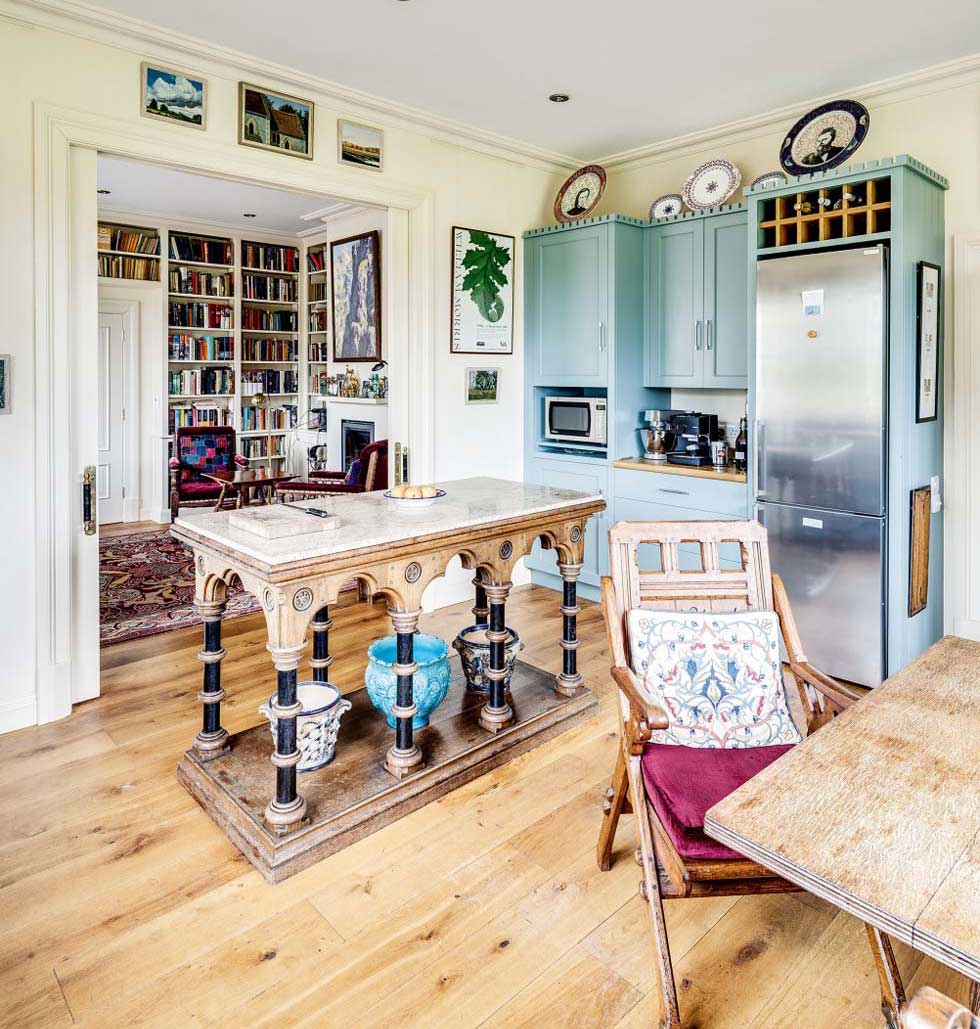 The kitchen and snug joinery is from Craigie Woodworks

The human scale of things helps – this isn’t a showy wannabe stately home – as does the offset front door (rather than being positioned symmetrically centre). So too does the very low window cills (with sumptuously large sash windows that have even in one room incorporated some stained glass that James picked up). Built with the help of an expert project manager, Bob Dean, who liaised on James’ behalf with the builder, Pat Carty in nearby Marlborough (with regular meetings on site with Alex and, of course, James), this was a trouble-free project. 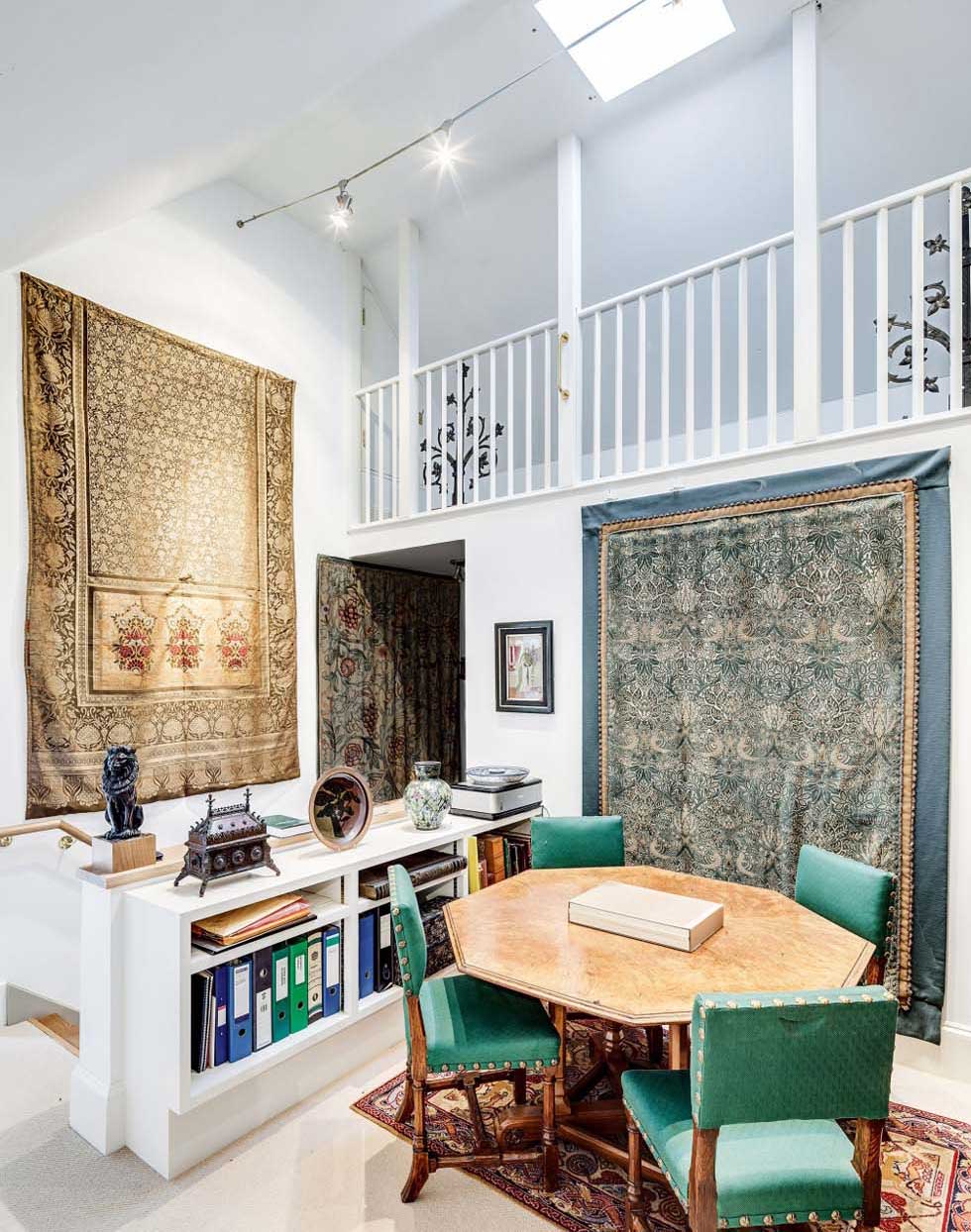 The first floor landing has been designed as a library/ reading space, it is made a little more generous than the average landing in order for it to accommodate an octagonal table chairs and bookcases

In many ways it’s a highly unusual project. It’s part home and part museum. Many people would feel uncomfortable sharing their space with such an array of artistic baggage. In the best sense, this is truly a home built for its owner. James is obviously drawn to eccentricities — there are a series of stones embedded in the back garden in gigantic cruciform layout that the visitor clocks as the remains of an old abbey; James tells you it’s the ancient Abbey of Mannesford then bursts out laughing and confesses it was all the result of a few too many glasses of wine. On a smaller scale, the kitchen cabinets are crowned in mini castellations. 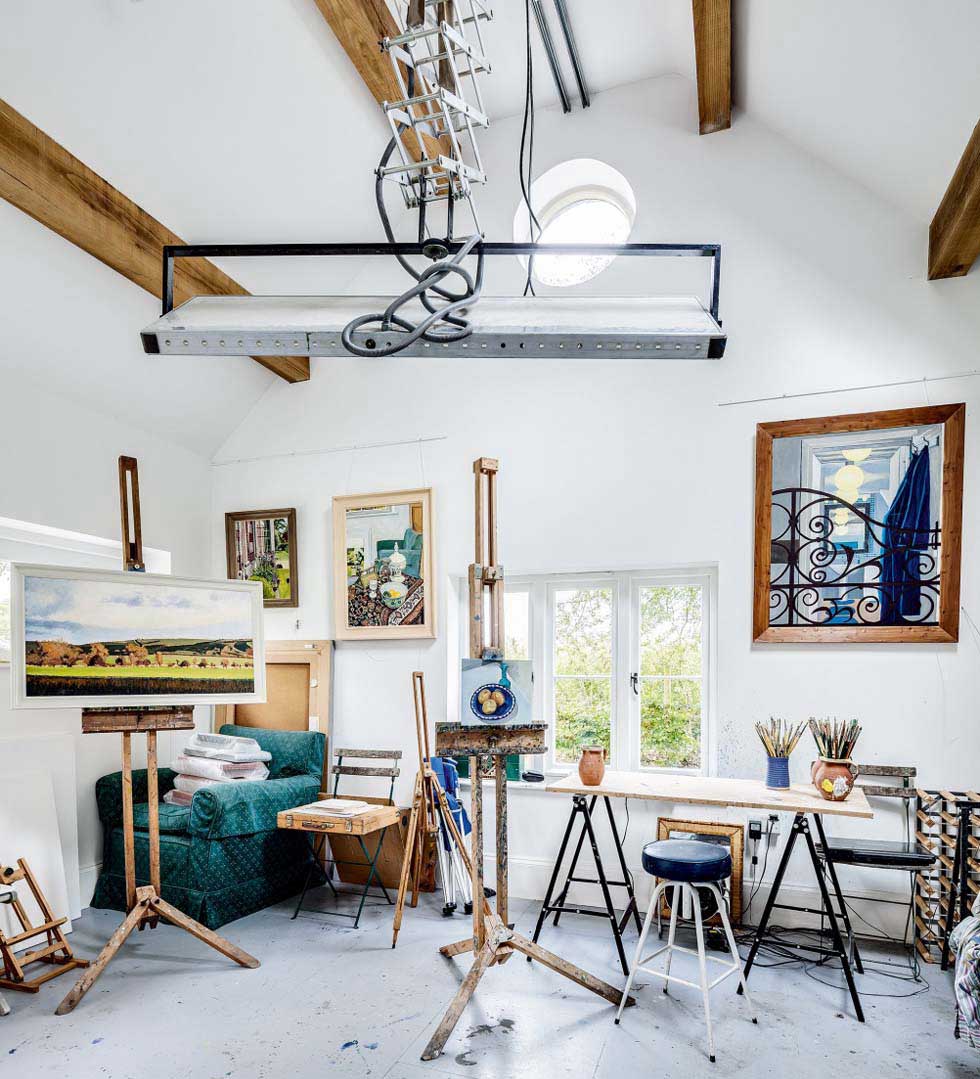 This space is emphasised and given volume by the use of a vaulted ceiling.

Despite all the room, James and his wife seem to spend most of their time living on the ground floor (the master bedroom is situated here too) and huddle around a stove in a smallish room that also serves as a dining area. It’s quite a modest existence, really, and helps in an odd way to give the sense that this could easily be 1914 rather than 2014. Which of course James would really love.

Despite his modesty and slight frustration at the planning process (he’s not the sort of man, it seems, who takes compromise terribly well) what he should have said when summing up this project is that, thanks to Alex, and his own ballsy spirit, he’s ended up with something that is sweepingly beautiful, splendidly detailed and totally a home in the mould of the owner. And, if building your own home is about anything, surely it’s about that.