A Stand-out Self Build | Homebuilding & Renovating Skip to content Sophie Goldhill and David Liddicoat’s new home is a remarkable solution to the constraints offered by a small site with a difficult planning history.

If ever there was a tale of how guts and guile in the hands of self-builders managed to create a result that is completely off-the-scale, then this is it. For Sophie Goldhill and David Liddicoat have, with the completion of their innovative ‘Shadow House’, proved that (relatively) affordable self-build is still absolutely possible in some of the trendiest parts of London.

Finding a self-build plot in the capital is never an easy task, and for Sophie and David the process was no different. “We scoured the city for a forgotten scrap of space, exploring back streets and even peering over fences. We eventually discovered a derelict garage – home to rats, foxes and junkies – in Camden. At just 36m², it seemed impossibly small. To add to the general sense of despair, the site was in a fiercely protected Conservation Area, and the previous owner had endured two failed attempts to win planning approval. All of this depressed the value enough to enable us to buy it for £75,000 in the summer of 2006,” the couple explain. 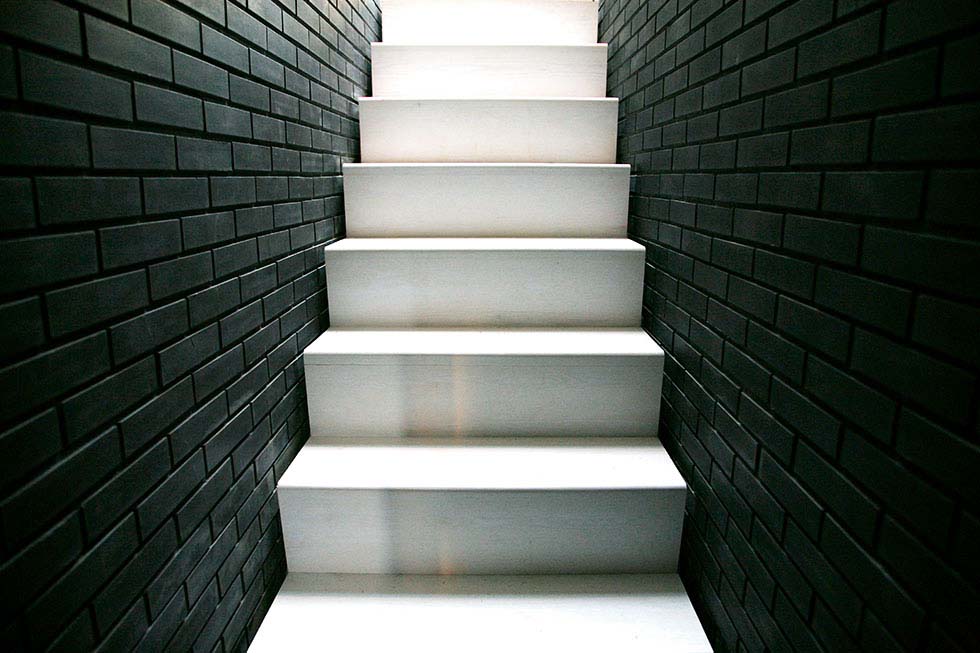 The key to unlocking its potential – and bringing Sophie and David closer to their dream – would be through the planning process. As David explains, “we took a careful and, most importantly, collaborative approach to gaining planning permission, developing the design in close conversation with the council’s officers. The site was overlooked by many of the neighbouring properties. The conservation officers were keen for us to go down a more contemporary, even radical path because they felt that having something pastiche next to the real old house next door would be wrong; they also wanted something that reflected the industrial context of the existing use. In its simplest way, we knew that a small house with a flat roof would have the most minimal of impacts.” 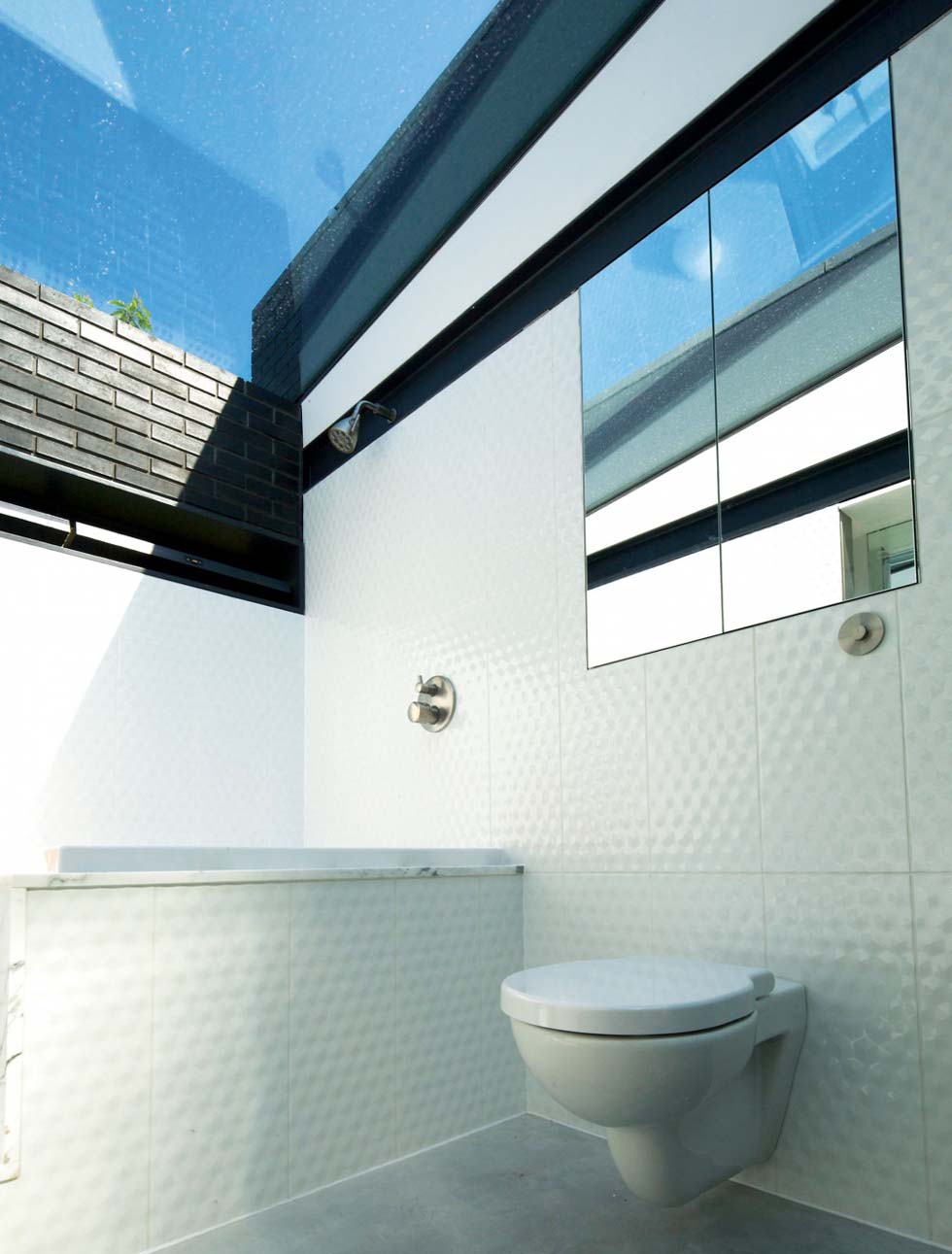 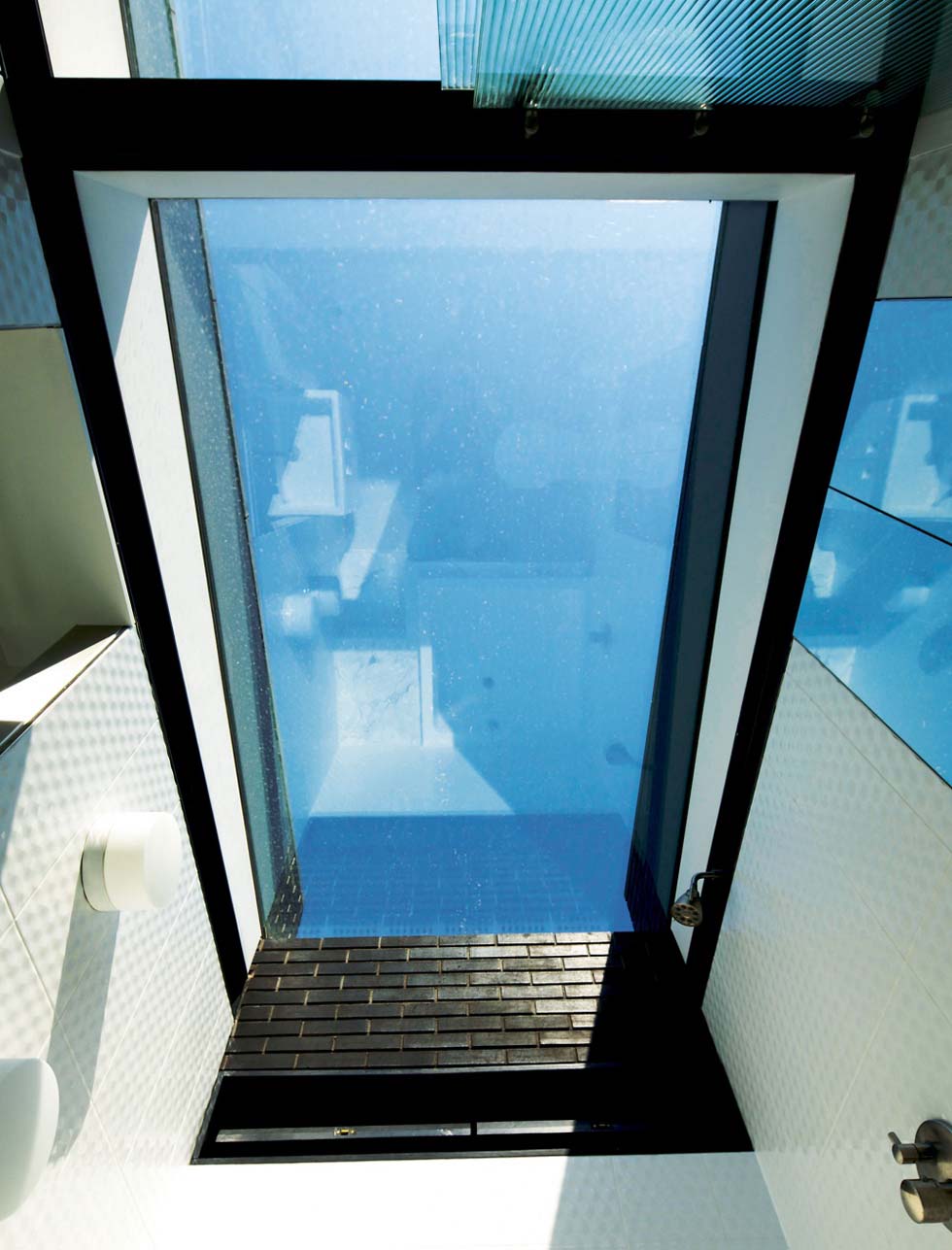 The most striking feature of Shadow House is, inevitably, the choice of internal and external materials, namely the Dutch-format engineering brick (that David had been itching to use on projects for several years) that has a black glazed finish. For a house that uses black brick as an internal finish, there was always a danger that a dungeonesque feel might occur. The result, however, is far from it — thanks to the lighting, the glaze of the bricks themselves, as well as the huge frameless panels of glazing, there is a definite ‘intense’ feeling (as Sophie calls it) which is actually rather refreshing. 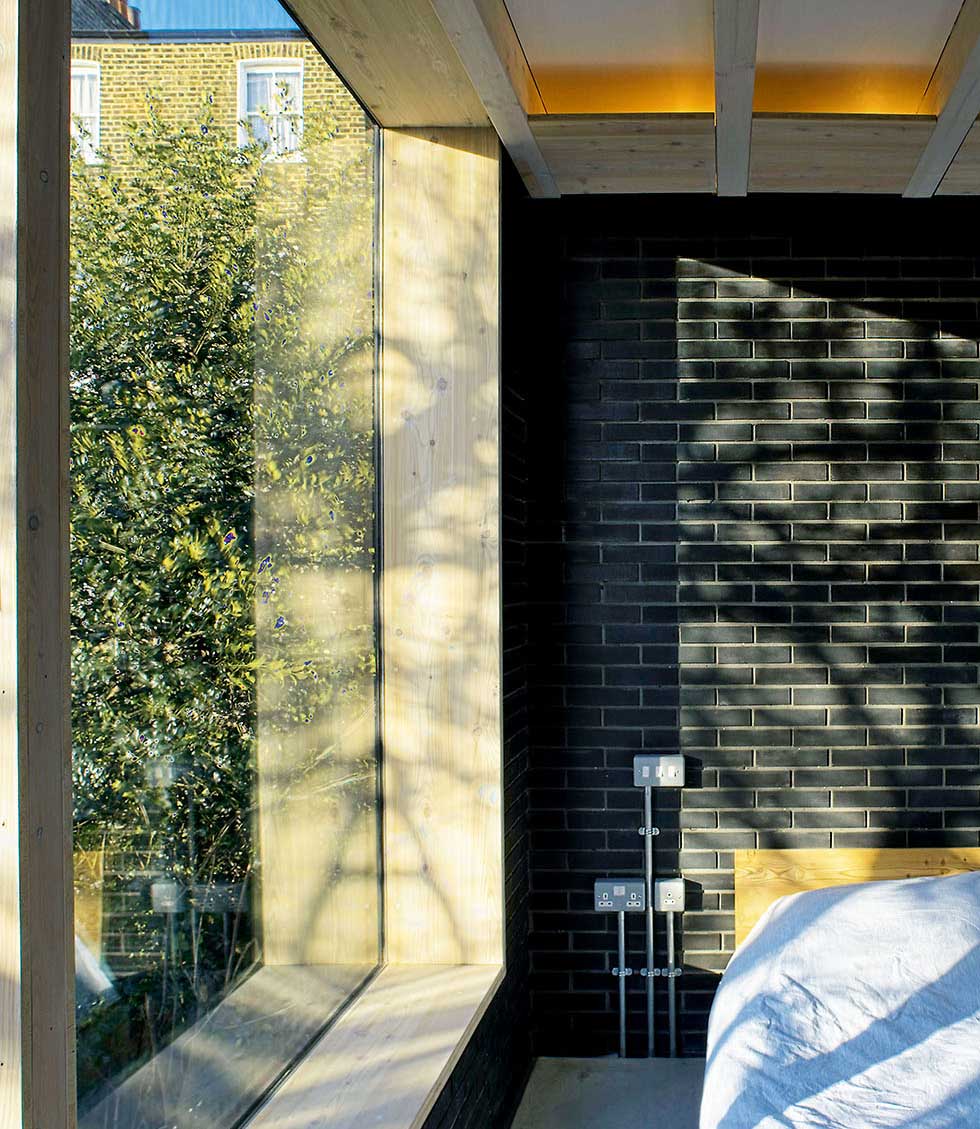 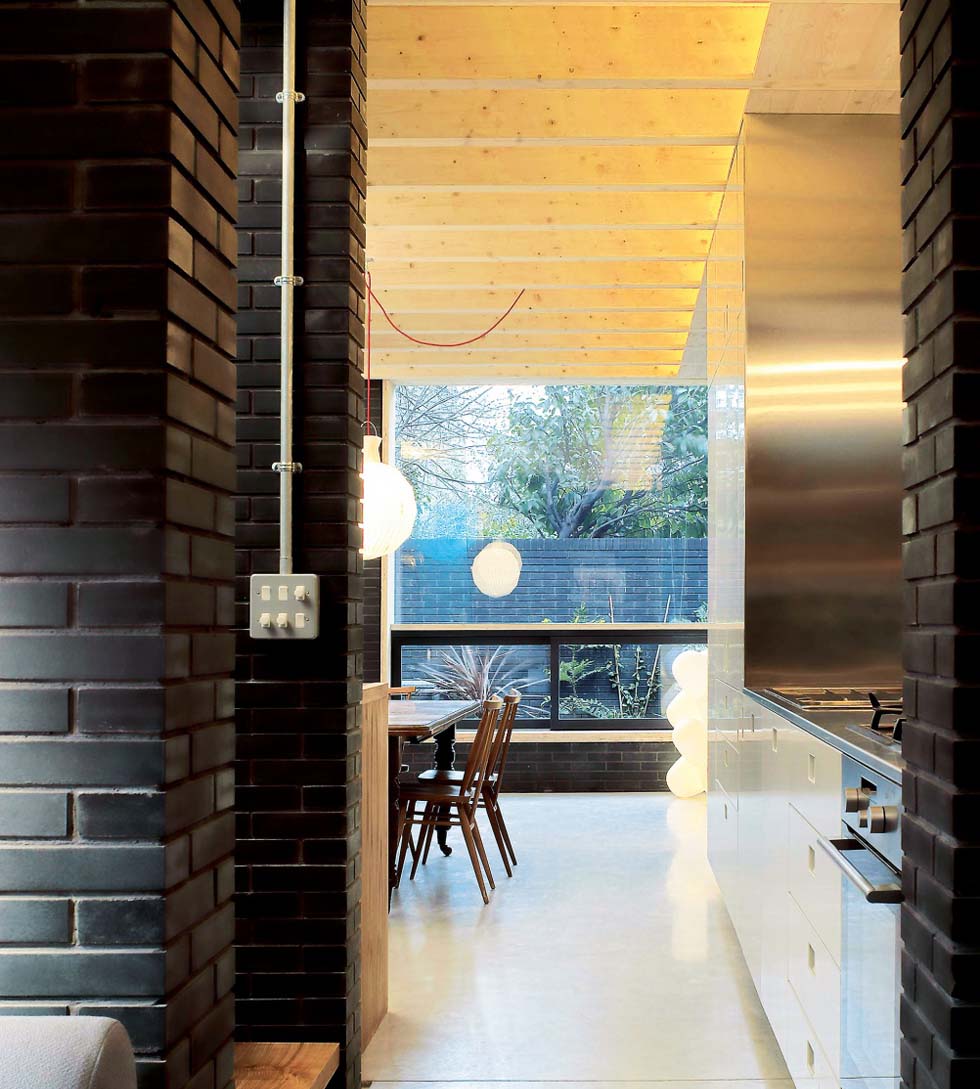 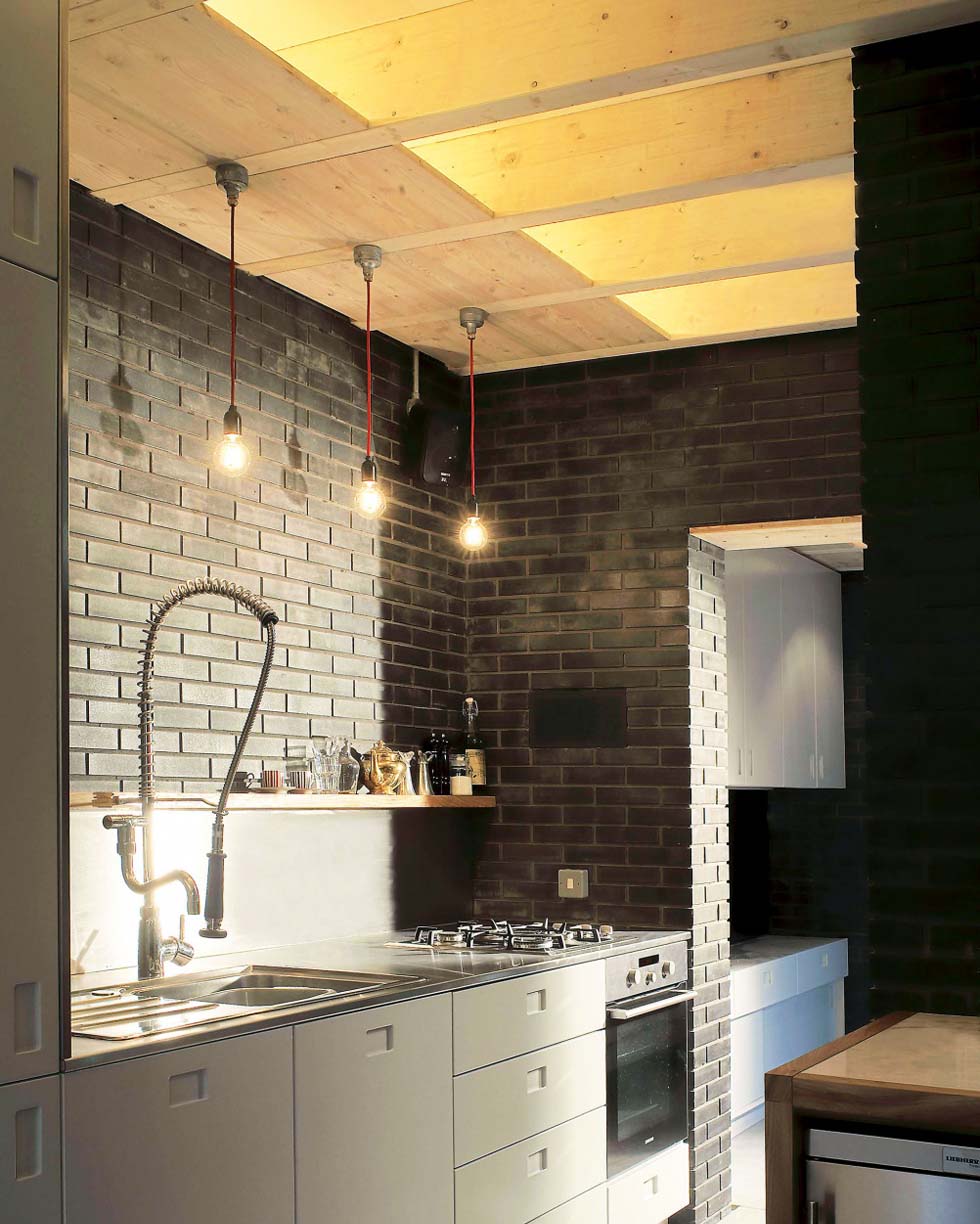 At 78m² (incidentally, just 10m² less than the average size of a new home in Britain) “it was only just big enough to build,” according to David. Its accommodation, however, is spacious and stylish and, based on equivalent floor sizes, easily beats a flat or maisonette.

“It wasn’t easy,” says Sophie. “But, looking back, definitely worth the risk we took.” A design that started out as a reaction to a specific planning situation has become a compelling template for urban homebuilding — a new home that is respectful, low impact but confident at the same time.