A Single-Storey Self Build | Homebuilding & Renovating Skip to content Grant Duncan has built a spectacular light-filled modern villa full of interesting curves and angles set into a secluded former walled garden in Fife and featuring lots of floor-to-ceiling glazing.

The starting point for Grant’s stunning modern villa didn’t just involve the usual design brief. Instead, Grant prepared a picture board containing everything that inspired him – “that made [him] tick” – from David Mellor cutlery to a classic Ferrari model and Mies van der Rohe’s Barcelona Pavilion.

Presenting this to the architects, Grant’s picture-board design vision was then distilled into Duncan House, which is without exaggeration one of the finest contemporary homes in Scotland — and an enjoyable and user-friendly one to boot.

Duncan House first took shape around ten years ago when Grant was visiting a friend in rural Fife and noticed a piece of land nearby that was for sale. “The site sits within a walled garden on the site of the former Kinloch Mansion House (a traditional residence remodelled in 1869 in the Scots Baronial revival style).

There were two gardens back to back – our site was the fruit garden and the garden next door, the vegetable garden. We bought the site when it first came to my attention but sat on it for a little while until we decided what to do,” explains Grant.

The catalyst to move forward arrived in the form of architect Gareth Hoskins and his team of Liam McCafferty and Kathy Li. “We wanted something contemporary and decided to interview around seven or eight well-known Scottish architects,” Grant explains. “At that time Gareth was just emerging and we chose him as we felt that we could really work with him. And the rest is history!”

Grant admits that there was one aspect of the final design that really swayed his decision. “The thing that attracted me to the design that we chose was the roof. It’s an amazing overhang, like an aeroplane wing. It’s so thin it just looks like it’s floating.”

Elsewhere, the design reflected Grant’s desire for a minimalist home with white walls and lots of glass. “We also wanted a house where we were utilising all the space in the property. We had previously lived in a seven bedroom traditional stone mansion house that was twice the size of this place, but we didn’t use a lot of the space in the old house, whereas there is very little of this house that isn’t used.”

As a result of Grant’s very open brief and a ‘not-forprofit’ approach to the budget, Duncan House is impressive to say the least in terms of its ambition.

The single storey house uses the traditional language of thick Scottish harled walls with niches – a bit like old Scottish castle walls – set against the stone boundary walls of the garden. The main white render walls of the house form an L-shape. The first cuts through the garden wall to lead visitors into an entrance garden whilst screening them from the main spaces of the house. The second wall runs perpendicular to the first on the axis of the original central path through the garden. This wall screens the bedrooms and bathroom that look east onto a private orchard. The main living spaces sit within the angle of the two walls, facing south towards the main garden.

The south and west edges of the living area are defined via three giant glazed planes featuring “the biggest sheets of double glazing we could get,” says Grant. The living area features a small formal living area, a dining space and “wooden croissant” shaped kitchen area, then the main informal family room. Since overlooking isn’t an issue, the three bedrooms in the eastern wing are fully glazed with separation walls between each also functioning as built-in storage units.

“The connection with the garden works very well,” says Grant. “Every bedroom has a door that leads out to the garden, and the living room has three large doors that also open out. So in the summer the house almost becomes at one with the garden. There is a lot of solar gain, and the way that the overhanging roof has been designed means that the temperature is constant – the high summer sun doesn’t get caught full on, yet at the same time the low winter sun gets in.”

The remarkable ‘floating’ roof is square in plan (where one half of the triangle covers the living area and the other overhangs outside) and cantilevers around five and a half metres. It’s only a few inches thick, and this impressive feat of engineering has been achieved via a steel structure, wooden joists, insulation then finally a Sarnafil waterproof membrane. “We looked at lead and zinc but they wouldn’t have been as sharp – they would have been boxier,” explains Grant. “It’s one of the few materials that would have suited the house in order to achieve the tight crisp lines. It’s like a modern-day felt – it’s very malleable, lightweight and durable.”

“There are some amazing details in the house,” says Grant. “The drum room is a beautiful space – and the most expensive room of the house relative to its square footage. It’s a timber frame (white wood) structure, two sheets of ply and then plasterboard and plaster to the interior with air-dried oak cladding. The room is oval but the roof is round with a glass atrium which lets the light in from above. It’s an incredibly complex but amazing feature. I use it as a music room – and my children play instruments so when they are in it they bash the drums or keyboards. It has wonderful acoustics – music seems to reverberate around it.”

The main structure of the house has been constructed via a steel frame and blockwork, and the whole house took the best part of two years to complete: one year for the construction and around a year for the finishes. All elements of the build were supervised by Grant. “I lived nearby and supervised daily, but my approach was hands-off – I was just overseeing it, making sure that the quality of the workmanship was up to a certain standard and organising men and materials. I hadn’t done a self build before and although it was stressful I’m glad I did it as the quality is there, and I might not have achieved this high standard by employing a company to oversee the project. We used hand-picked tradesmen and the finishes in the house are very, very high quality. My friend Max MaCance, who did a lot of the timber details, has created finishes that are more like furniture in terms of the standard of craftsmanship.”

Elsewhere in the interiors, Grant’s minimalist ethos presents itself in a series of pristine white walls, oak, and limestone floor finishes, much of which he sourced himself. “But I would run everything by the architects before I committed to the materials,” he explains. “There were certain things that the architects had to persuade me to keep, such as the box window at the front door which I didn’t really want as I wanted a straight white crisp wall. But they convinced me that the window offered a sneak preview that was important to the design idea – which was a house that revealed itself slowly. I’m pleased I went along with this idea as it actually works really well.” 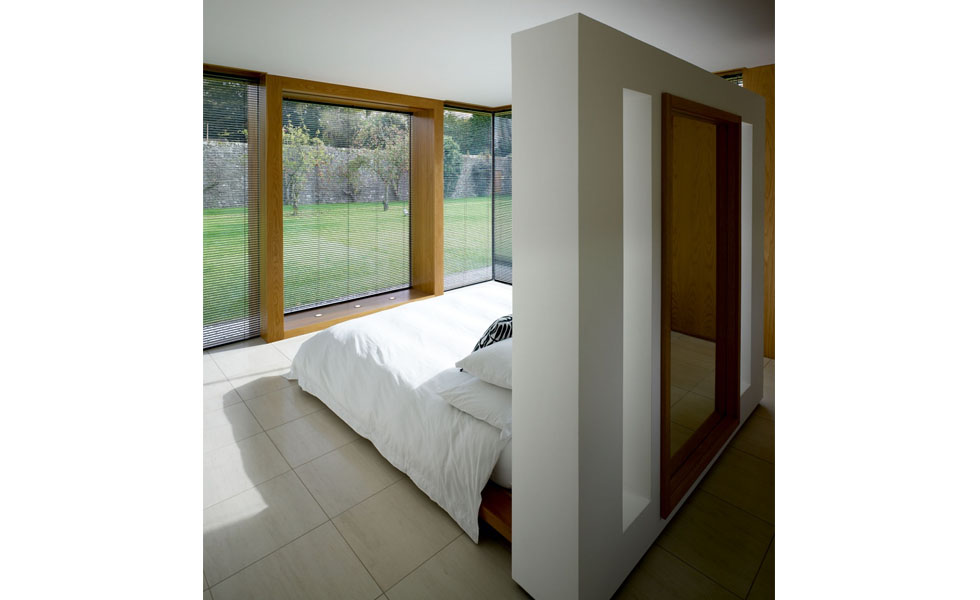 Another area that works really well is the energy performance of the house. “I don’t have any heating on from May to October. The efficiency is excellent and is all worked from a wireless thermostat so that the temperature in each room is controllable. The only down side is that kerosene powers the underfloor heating and hot water and since I moved in the price of fossil fuels have doubled.”

“I wouldn’t change any elements of the house,” concludes Grant. “There are so many aspects of the house that are amazing: as well as the ‘Drum’ music room and the roof, there’s the various angles of the glass in the living area which creates a spectacular effect; the kitchen design which doesn’t cut you off while you’re cooking; and the open plan living space. It all works so well.”