A Dream Home on the Coast | Homebuilding & Renovating Skip to content Most architects must secretly dream of a wealthy client who arrives with no brief, asks few questions and sets no budget — so when Tony Gibbon first approached his Devon-based architect, Stan Bolt it must have seemed to Stan as if all his Christmases had come at once.

“I felt incredibly privileged to be involved in such a project,” he says. “Very few architects ever get this kind of opportunity.”

Tony had recently purchased a large 1960s house on a dramatic site in Salcombe, with panoramic vistas of wooded landscape, beaches, the mouth of the estuary and an open seascape beyond. It was this setting that was to form the canvas for his new house, which replaces the original property while still retaining a similar sized footprint.

“At first I considered renovating and improving the existing house, and spent two years going down that route. However, costs were prohibitive compared to a new build and the site is so fantastic that I felt it deserved something special,” explains Tony. “I’d never built a house before, so finding the right architect was vital – particularly as I’m so busy and knew my input would be minimal. I had to work with someone I could absolutely trust.” 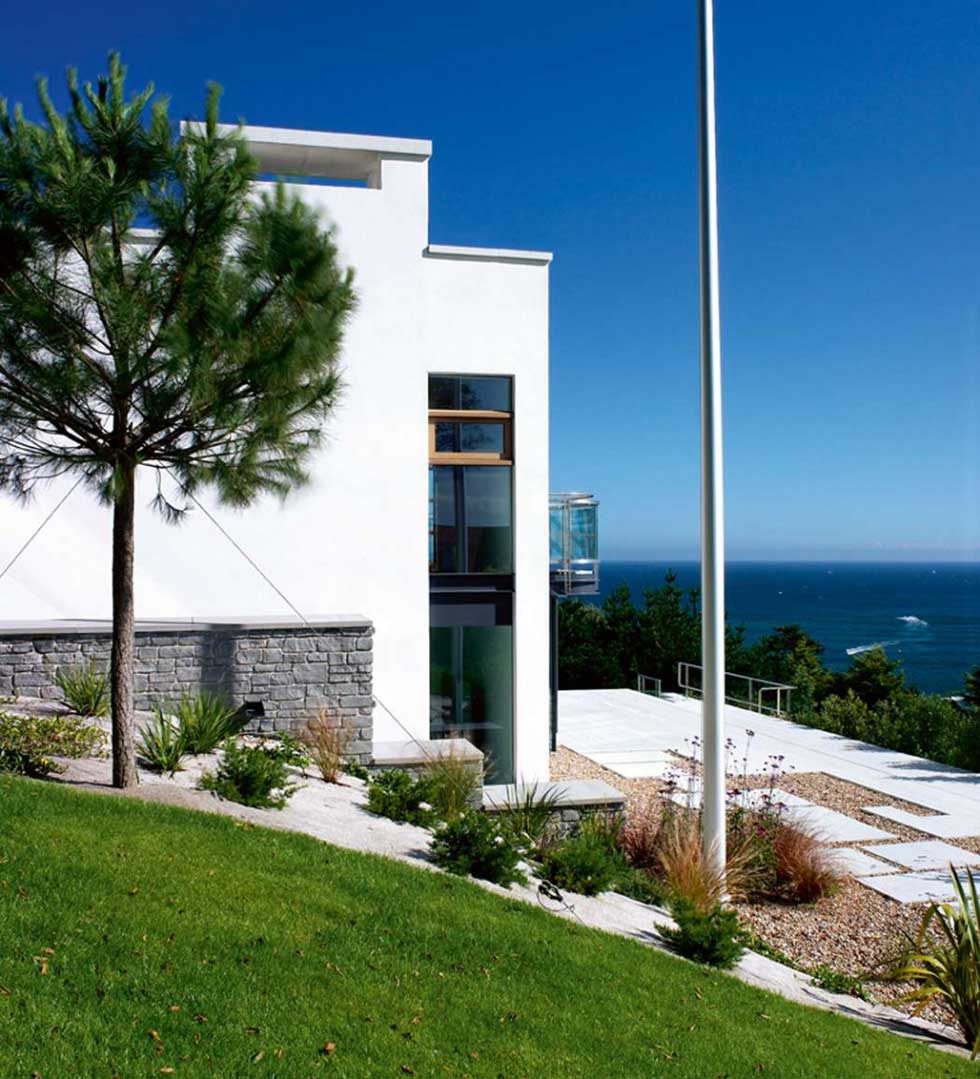 A friend had recommended Stan Bolt, who is well known for his striking contemporary designs – many of which are situated close to the sea. Impressed by his portfolio, Tony determined that Stan would take charge of building a replacement dwelling for his site, which is most prominent when viewed from the estuary below.

“I felt very comfortable with Stan,” says Tony. “He’s honest, and I knew that he and my contractor, Ian, wouldn’t let me down. No formal budget was set and there was no real brief. I simply asked him to design his own dream home. We had an initial 15-minute meeting and I think I said something along the lines of: ‘It has to be an award winner, Stan!'” 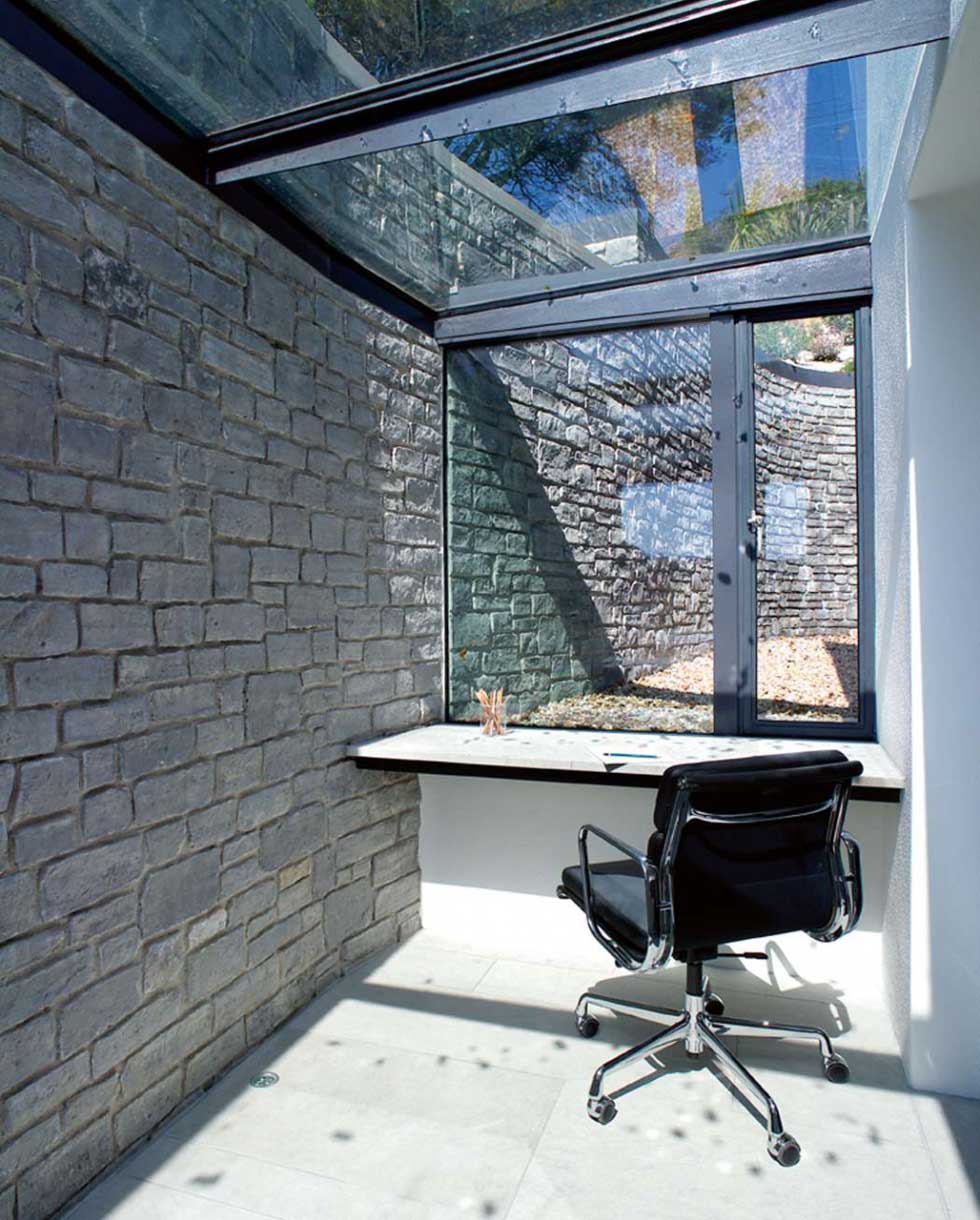 For many architects such a brief would have been a licence to go berserk, but Stan took the opposite approach, paring everything down to create a stripped-back, minimal design blurring the divide between inside and outside and virtually dragging the landscape into the building. Adopting such an approach demanded finesse when it came to completing the structure and finishes.

“We could have been totally outrageous and taken advantage of the situation, but I think we actually went the other way,” says Stan. “After working for so long with Tony on plans to redesign the original house, he was understandably impatient to start building, so keeping things simple also helped to speed up the process.” 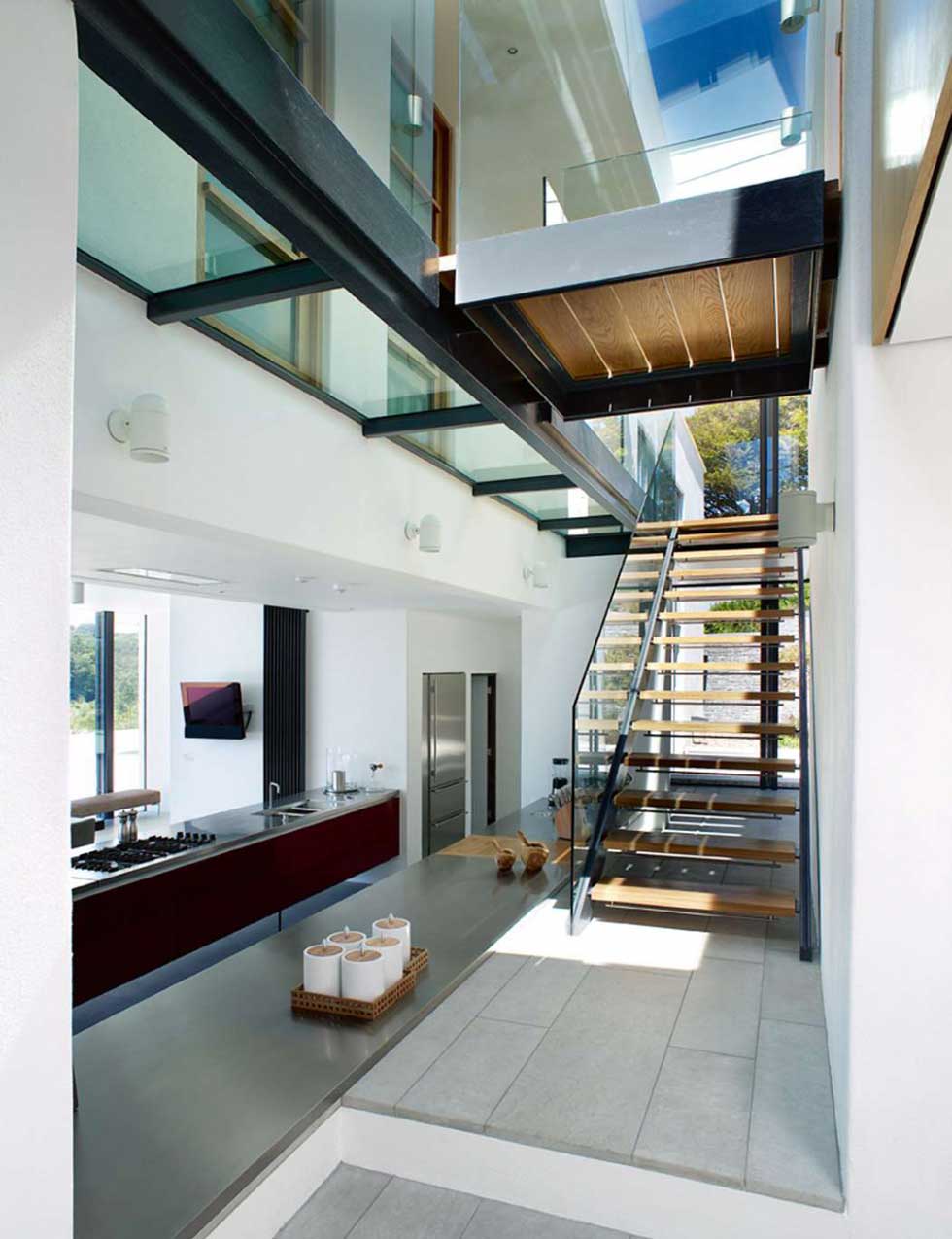 Gaining planning permission for the new house was fraught with potential pitfalls – not least because the site stands within an Area of Outstanding Natural Beauty and a Coastal Preservation Area. Carving the building into the contours of the hillside and bounding the site with walls and mature planting has ensured that it is both discrete, and private from the immediate neighbours.

“Excavating the ground floor into the site significantly reduces its impact on the landscape,” says Stan. “We retained the established building lines, but the new house has flat roofs and is far more transparent than the previous two storey 1960s property, which had a higher pitched roof.” 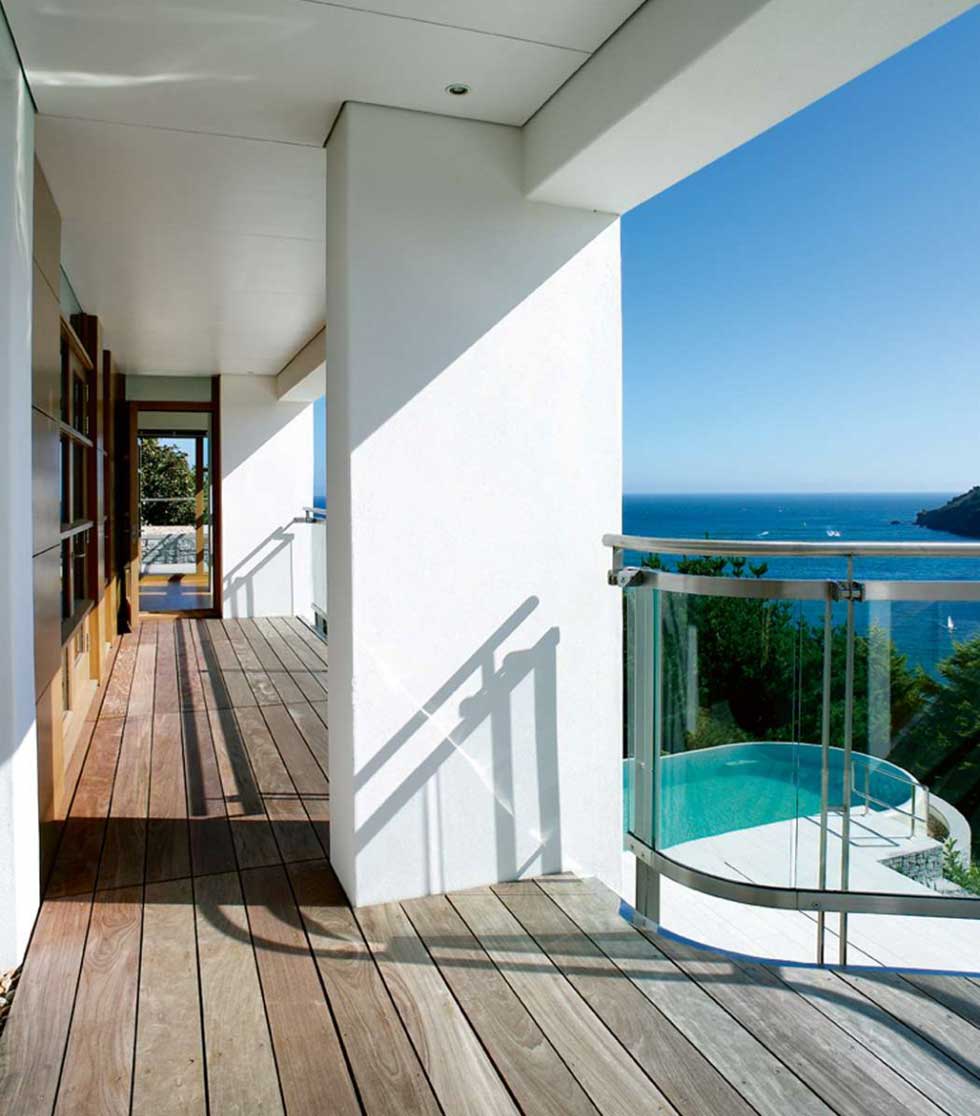 The planners concluded that the proposed design presented ‘a good contemporary solution’, and the application was passed. Tony, content to remain detached from the overall process, visited the site only twice during the build. Ian, the contractor, landscape designer and an interior designer – who had previously worked on Tony’s New York loft apartment and was responsible for choosing items of furniture – joined the team to complete the property, which was then duly unveiled to its owner.

“I thought it was fantastic,” Tony recalls. “Stan had incorporated many of his trademarks, such as a pivoting entrance door, glass floors, bridges and balconies. The fact that somebody else designed everything right down to the colour of the kitchen really wasn’t a problem for me, because the end result is perfect.”

In fact, Tony’s only slight concern about the entire building related to increasing the storage areas. Despite the jaw-dropping features, integrated gadgets and inviting outdoor swimming pool, it is still, however, the view which gets him every time.

“I’m happy to hang out up here and enjoy the peace and quiet, standing staring out to sea,” he explains. “Family and friends come to stay, and they’re also amazed by the view and the way the house opens up so completely to the surroundings.” 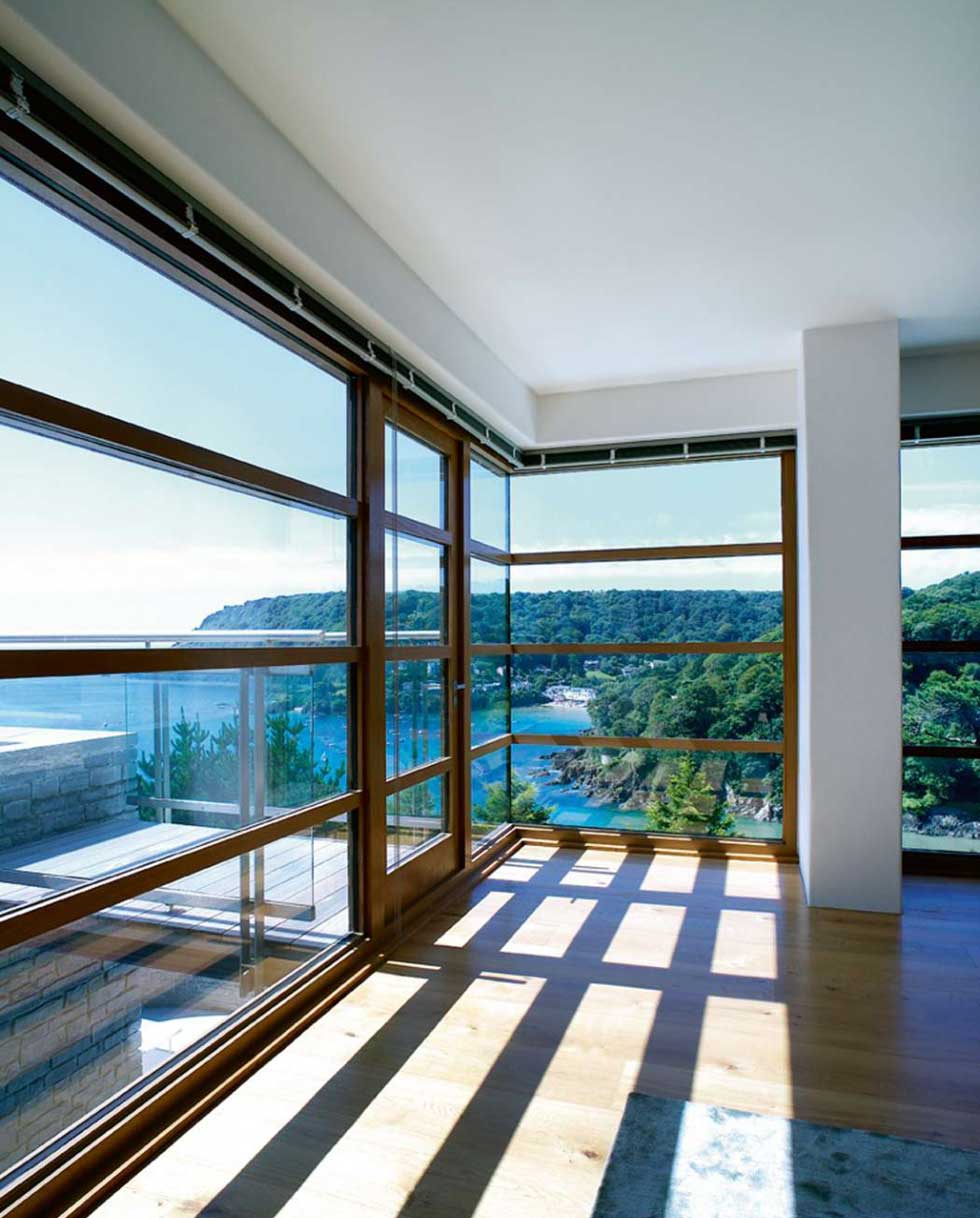 Frameless glazing, large areas of external walling and a continuation of floor, wall and ceiling finishes serve to visually and physically link the landscape and gradient of the coastal slope through the house, which is virtually transparent from front to rear on the predominantly open plan ground floor.

Upstairs, the accommodation is more cellular and generally set back from the front face of the property. Glazed walls, lightweight oak-faced panels, terraces and balustrades shield and frame elements of the seascape beyond. To the rear, slot views of the northern courtyard, landscaped garden and sky offer privacy and contrast strongly with the front elevation.

“Orientating the lightweight glazed façade to face south-west also maximises the benefits of passive solar heating,” says Stan, “and the predominant use of stone flooring and masonry walls creates a heat sink. In fact, the majority of the solid elements of the building, such as the flat roof, approach super-insulation levels.”

Areas of glass sliding wall provide plenty of natural ventilation, and the house has also been designed with a sophisticated heat-management control system, which is co-ordinated by a network of zoned thermostatic valves, all relating to external temperature sensors that fine-tune the high-efficiency gas boiler. An open woodburner serves the main living space with underfloor heating throughout.

“It’s possible to operate virtually everything remotely on the internet, so that I can control the heating, lighting and security while I’m away,” says Tony. 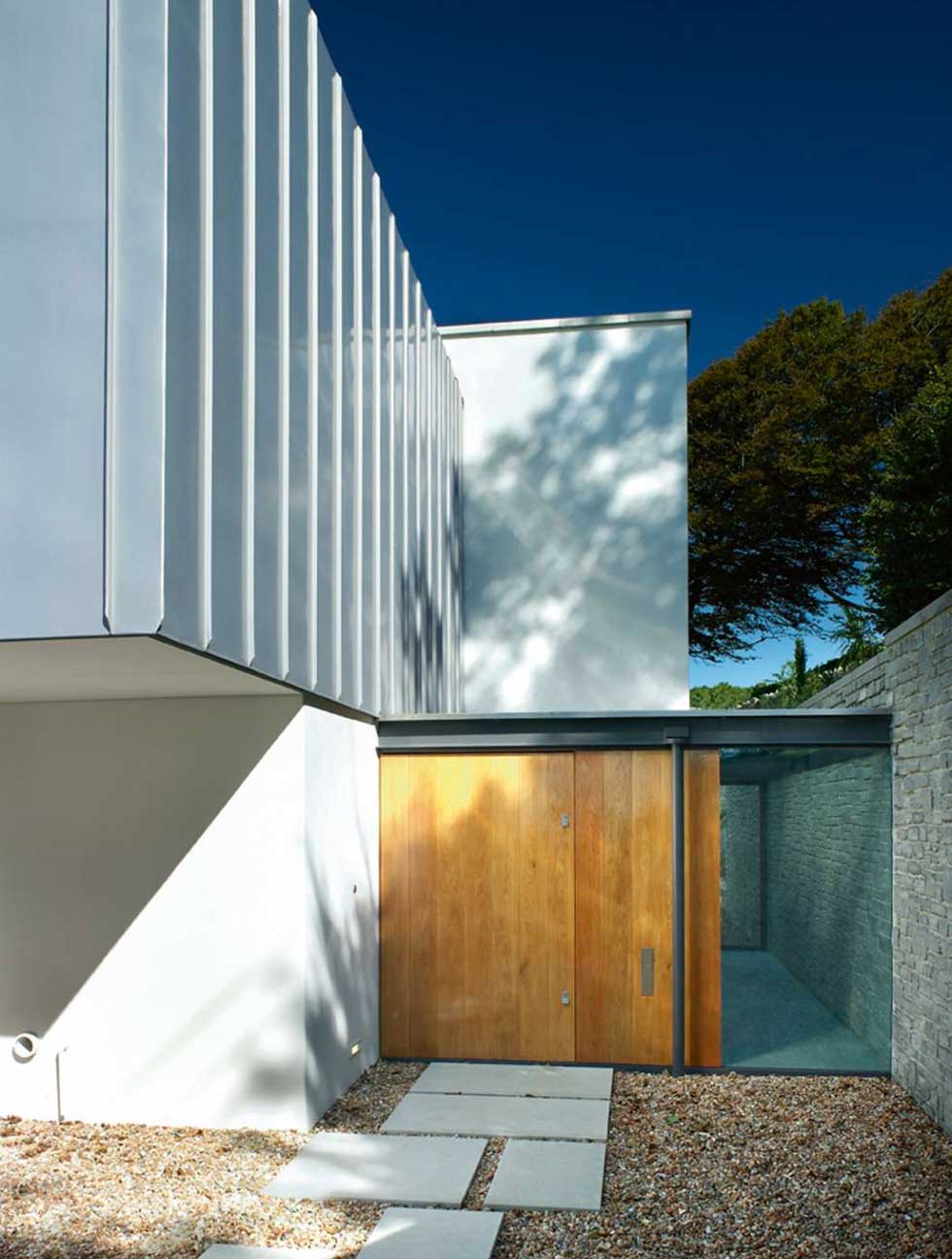 For Stan Bolt and his team – particularly project architect, Annie Martin – the great reveal was understandably a tense moment. “We did wonder whether Tony would like what we’d done,” she says. “It’s an exciting brief to be asked to design your own dream home, and means that we’re all extremely attached to the house – as we are with all our projects.”

In fact, when Tony began introducing his own artwork, Stan and Annie did tentatively suggest that hanging paintings of Paul Weller on the stone wall running through the building and out into the grounds might somewhat spoil the ‘inside-outside’ illusion. “Tough,” says Tony, “I need him around me at all times!”

For some, the concept of allowing your architect such a free reign would be unthinkable, but Tony’s trust has undoubtedly paid off. His new house responds directly to the nature of the site and its exposed marine environment. It is distinctly masculine, simple in form, and evokes a sense of robust durability. This is a house which will age gracefully and engages sympathetically and fully with its surroundings.