Natasha Marshall and Neil Fullerton’s ambition to fashion a new converted family home from a tricky semi-derelict commercial building, located on a small back lane surrounded by the stately Victorian and Edwardian sandstone tenements of Glasgow’s West End, was ambitious, but not foolhardy.

Indeed, to prepare for the challenges of renovating this ‘difficult’ building – with its origins in the 1840s and with a hotch-potch of 1960s additions to boot – the couple actually cut their teeth when they previously converted a 19th-century commercial building, that’s now their workplace, and located not too far from their new home.

“We learned a lot from the previous experience, which involved rebuilding and renovating a derelict printworks at the back of a city block,” explains Neil, who managed both projects alongside Natasha and architect friends Stuart Cameron and Miranda Webster of Glasgow-based Cameron Webster Architects. “Both projects were similar in that they had tight lane access, which creates logistical challenges,” says Neil. 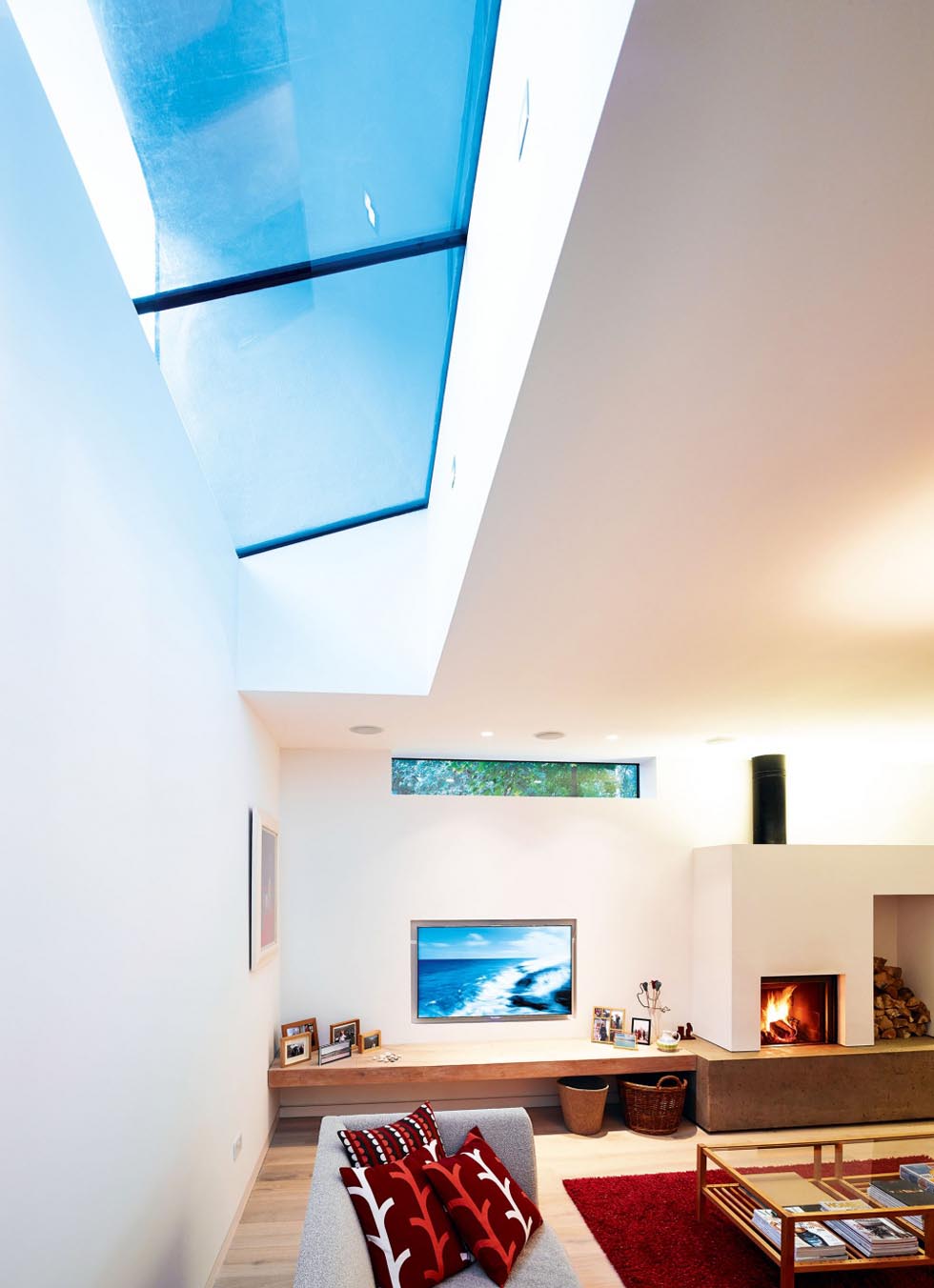 The focal point of this room is the Stuv woodburning stove. “We love how it can be an open fire or log burner and looks stunning on the poured concrete hearth,” says Neil. “And, it’s very low maintenance”

The origins of Neil and Natasha’s converted home go back 15 years. “We lived in a flat opposite the lane for 13 years and we always said that if it came on the market we’d have to buy it,” explains Natasha. “The original building was here before the tenements were built — the title deeds date from the 1840s. The previous occupant was an antiques restorer and there was also office space that we nearly rented out around 15 years ago.”

A ‘For Sale’ sign went up in April 2010. “We opened the curtains in the sitting room one morning and saw the sign and phoned up right there and then,” says Natasha. Following a chat with the sellers and planners, outlining their intention to convert the commercial property into a home, the couple eventually submitted a bid that was accepted.

One particular issue to address with the planners was providing adequate parking for this urban home. “Part of receiving planning permission required us to demonstrate that we could approach the main street, in forward gear, not in reverse,” says Natasha. “If we had committed the whole courtyard to parking we could have done a three-point turn, but we were also keen to have a garden. The turntable, which is steel with nylon rollers, allowed us to have a garden and separate driveway. You drive the car onto it and when you’re ready to go out you spin the car round by hand. The kids in the neighbourhood love it!” 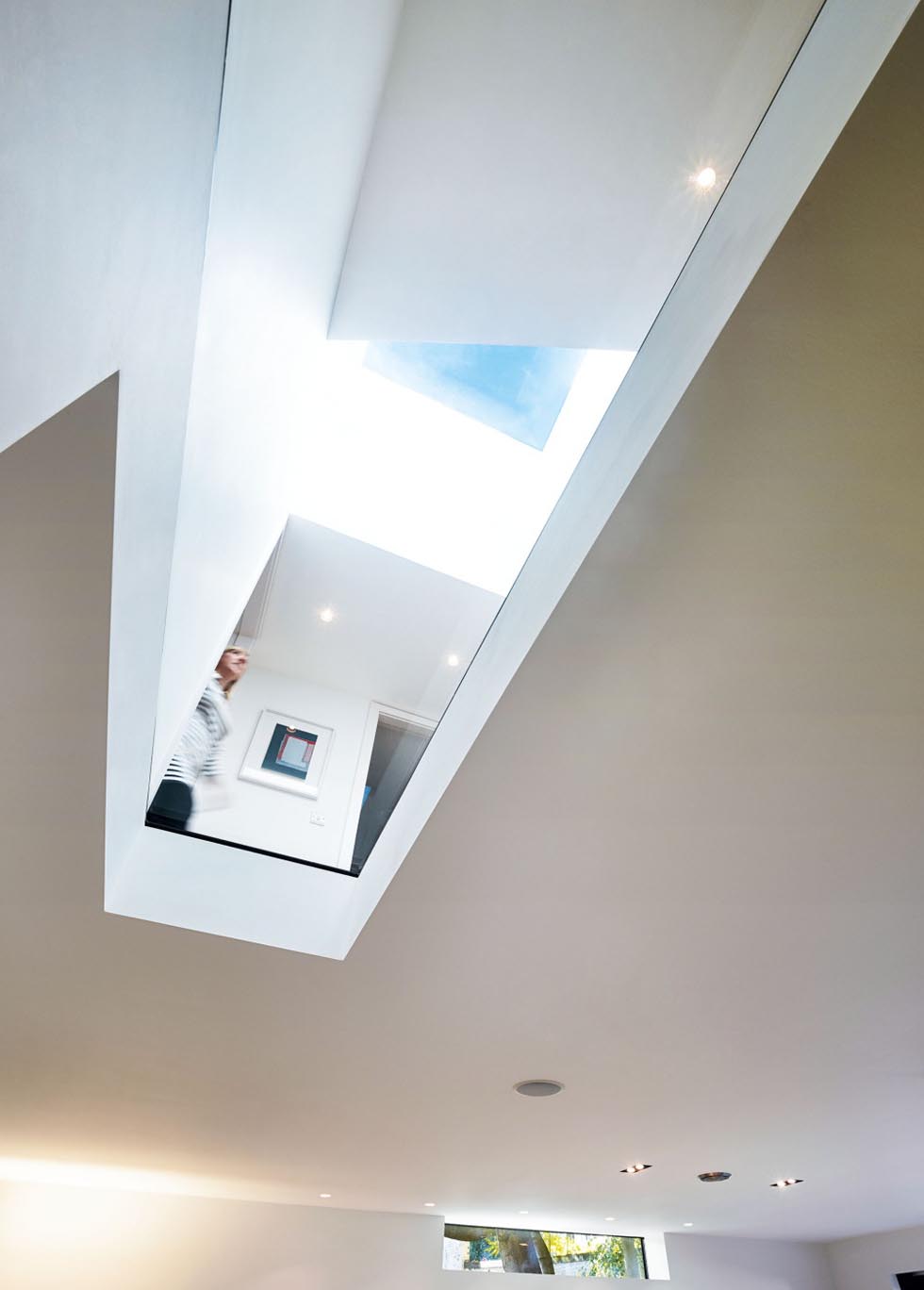 Clerestory windows and roof glazing ensure that the cosy living room is filled with natural light, without compromising privacy

A good start was augmented by the fact that the building – which consisted of ground-level workshops and various upper-level timber office extensions – was in a good state of repair. “It was immaculate inside; the beams and concrete roof were sound. There were no maintenance issues… at that point,” says Neil. A less-appealing aspect of the project was that it was a very dark building.

Bringing inside as much light as possible was the couple’s main aim, but in order to do so, some major structural decisions had to be made. Essentially, the front section of the roof was taken away and the two interior walls and wall at the rear of the building had to be removed to insert windows. At one point only the two side walls and three quarters of the roof remained.

However, the extensive structural work was well worth it — light now floods into the interior. “There are rooflights at the top of the building so when you walk upstairs you’re looking up at the sky, which is a lovely effect,” says Natasha. “And a slot has also been created in the middle of the living room so that there is always light. The little slot windows don’t look as though they are doing a lot, but they’re south facing so they bring in a lot of light for their size. These ended up being very expensive windows but definitely worth it in the end.”

The first floor window louvres not only chime with the design, but they also have a very practical function. “Due to the fact that the tenements are so close we had to find a way of having a shower or bath with nobody seeing in. They are angled so that the surrounding flats can’t see into the bathroom or bedrooms,” says Natasha. 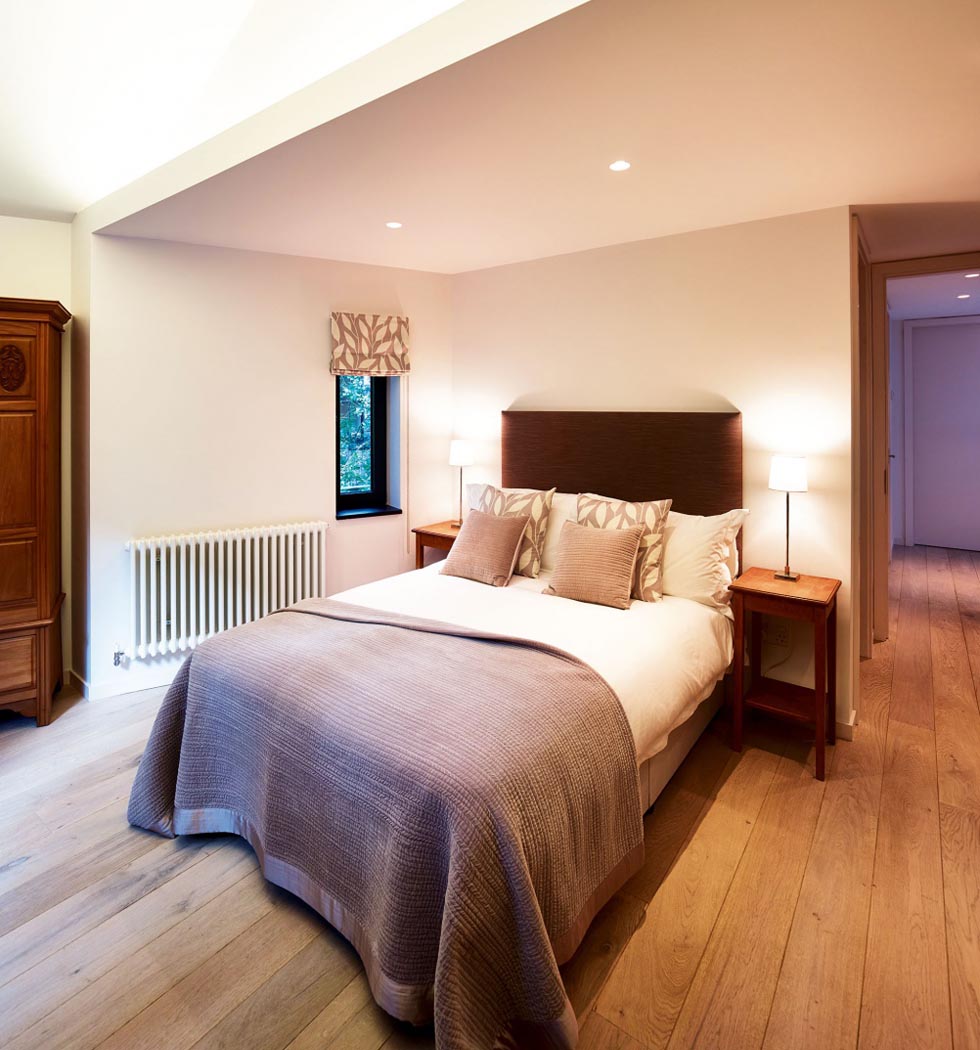 The couple, who run the fabric and wallpaper design studio Natasha Marshall, designed all the fabrics within the house — all are now available as part of a new collection launched this year

The resulting converted four-bed home is arranged over three levels, with an upper-level loft living area and roof terrace. The clever floating effect of the first and upper floor extension over the glass panelled ground level has been achieved by a steel span across the length of the building tied to the two existing boundary walls. “There is effectively a steel frame inside the new structure,” says Neil, who visited the site regularly, hopping between work and the couple’s nearby rental accommodation (they had sold their flat to raise funds for the build). “As well as the steel beam there are steel supports in the stair wall and in the corner where the utility room is located. The supports are cleverly concealed, which creates a real flow about the space.”

The unusual cedar-clad upper extension connects cleverly to the ribbon-like black timber cladding on the ground floor. Aesthetically its effect is dramatic, but the design emerged from more practical considerations. “The shape of the front façade really hides what lies behind: the juncture between the new and existing structure,” explains Neil. “The choice of the random cedar cladding and black painted timber, as well as the idea of the outside continuing inside – in this case the exterior shed going all the way through the house to form the main hallway – was inspired by some of the new buildings we saw during a trip to New Zealand.” 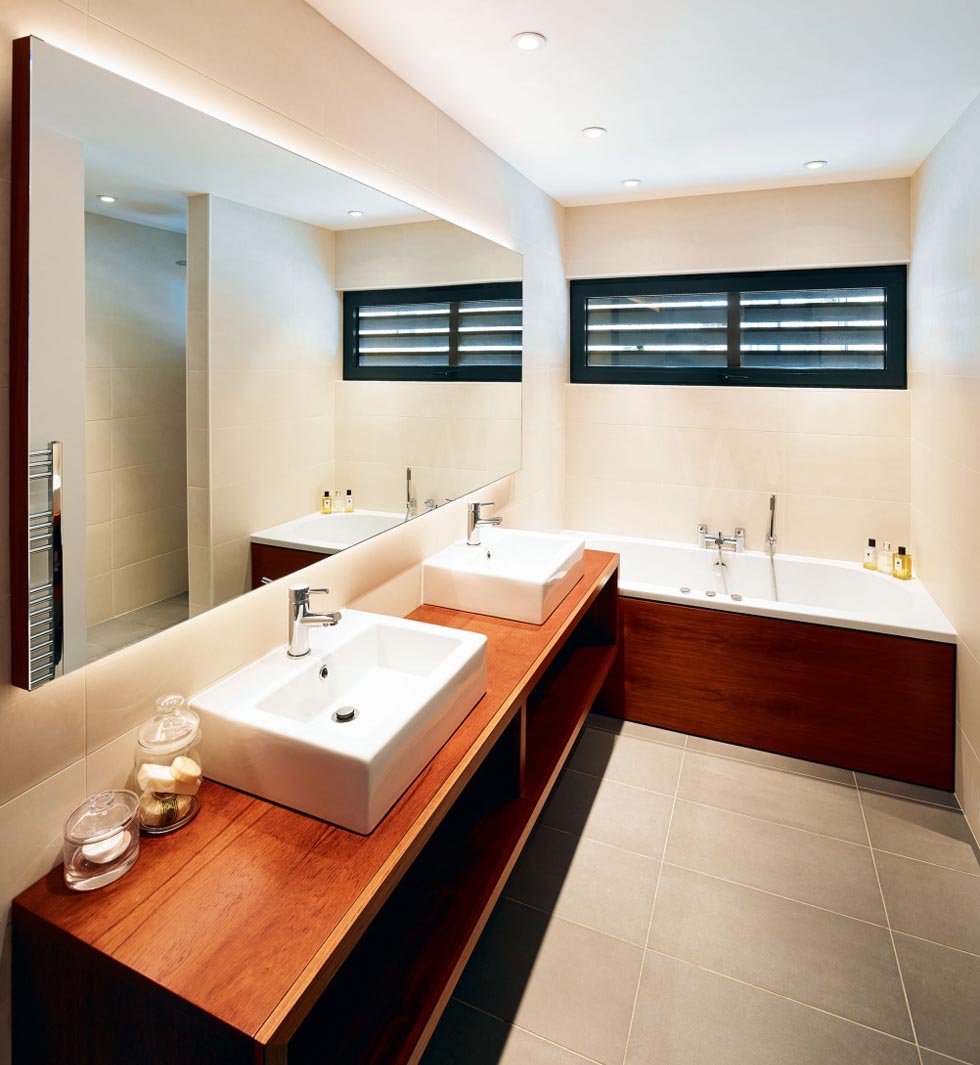 The couple’s love of sailing inspired the teak details in the main bathroom. “We got the idea of the window louvres from a hotel that we were staying in, in the British Virgin Islands, where louvres next to the shower looked out to the sea,” says Natasha. The exterior louvres also lend privacy to the bedrooms

The interior achieves a perfect balance between being both modern and soft. Natasha and Neil run a design studio in Glasgow, creating fabric ranges for various interior brands in the UK and Europe that sell into the interior industry worldwide. They designed all the fabrics in the house and had them specially recoloured to create “a soft palette that is really relaxing”, explains Natasha.

In harmony with this soft, relaxing raison d’être are interior details such as the simple concrete slab fireplace, stove and log store, wide engineered whitewashed oak floorboards atop the underfloor heating and a clever lighting scheme.