Eco homes don’t need to break the bank — as Nicky and Robin van der Bij proved when they designed and built their stunning coastal cottage for just £115,000. Even better, it costs just £270 a year to heat.

Eco houses are well known for being desirable, fashionable and highly ethical places to live, but this reputation is somewhat tarnished by the assumption that they are also expensive places to live — a fallacy which has been wholly disproved by Nicky and Robin, whose new environmentally friendly, energy-efficient cottage cost less to build than the price of an average one bedroom apartment.

Not only is their airy three bedroom home beautiful to look at, but what appears to be a traditional, stonebuilt Cornish cottage from the front opens into a bright, modern living space enjoying sea views from both levels. Standing in an enviable coastal location on the edge of the unspoilt Cornish village of St Agnes on the North coast, the property manages to combine the best of traditional style with modern eco living.

Choosing to Build an Eco Home

Initially, the couple had been drawn to the stunning cliff-top location back in 2003, when they purchased a tiny one bedroom bungalow which stood on the site with the intention of extending it to create a more practical home. 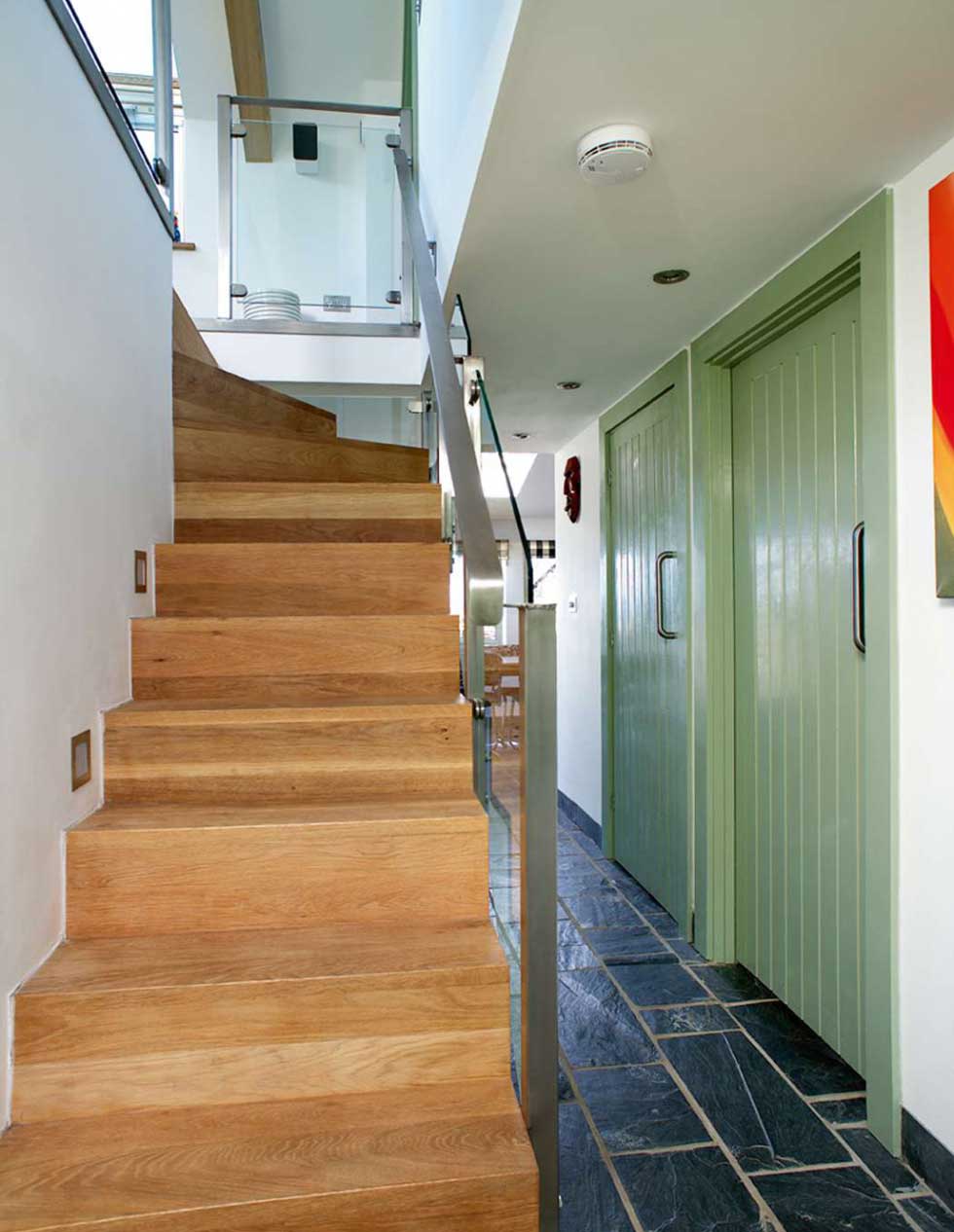 Nicky designed the staircase with glass and steel balustrading herself

“We were granted planning permission to build upwards to make another floor, but further investigation revealed that the foundations simply wouldn’t support a second storey,” explains Robin, a qualified civil engineer. “It was never our original intention to build a new house here, but the existing bungalow was so small and damp, with no insulation, that it suddenly seemed like a sensible option.”

The planners were agreeable to the proposition, provided that – externally at least – the new two storey property retained a vernacular cottage style to suit its protected Heritage Coast setting.

“So many new builds don’t have any real character, and we love the old local buildings, so using traditional, natural materials was something we were happy to do, but inside we wanted a contemporary look more akin to a boutique hotel,” says Nicky.

The couple have always been interested in eco issues, and their new build project offered the perfect opportunity to incorporate a number of environmentally friendly materials and technologies into the design.

Look at our gallery of stunning eco homes

They were determined to produce their own floorplans, using Robin’s technical expertise and computer knowledge, coupled with Nicky’s love of interiors. They went on to design a three bedroom home with a vaulted first floor sitting room which would take full advantage of the views. “We were lucky enough to have lived in the original bungalow on site for over two years before we started to build, so we understood the area, the neighbours and – perhaps most importantly from an energy-saving point of view – the movement of the sun through the different seasons,” explains Nicky, a former journalist and magazine editor.

Positioning two of the bedrooms and the kitchen downstairs, with the vaulted master bedroom and en suite upstairs next to the living room seemed like a logical way to make the most of the location, as well as working within parameters laid down by the planning department regarding the roof pitch and maximum ridge height. 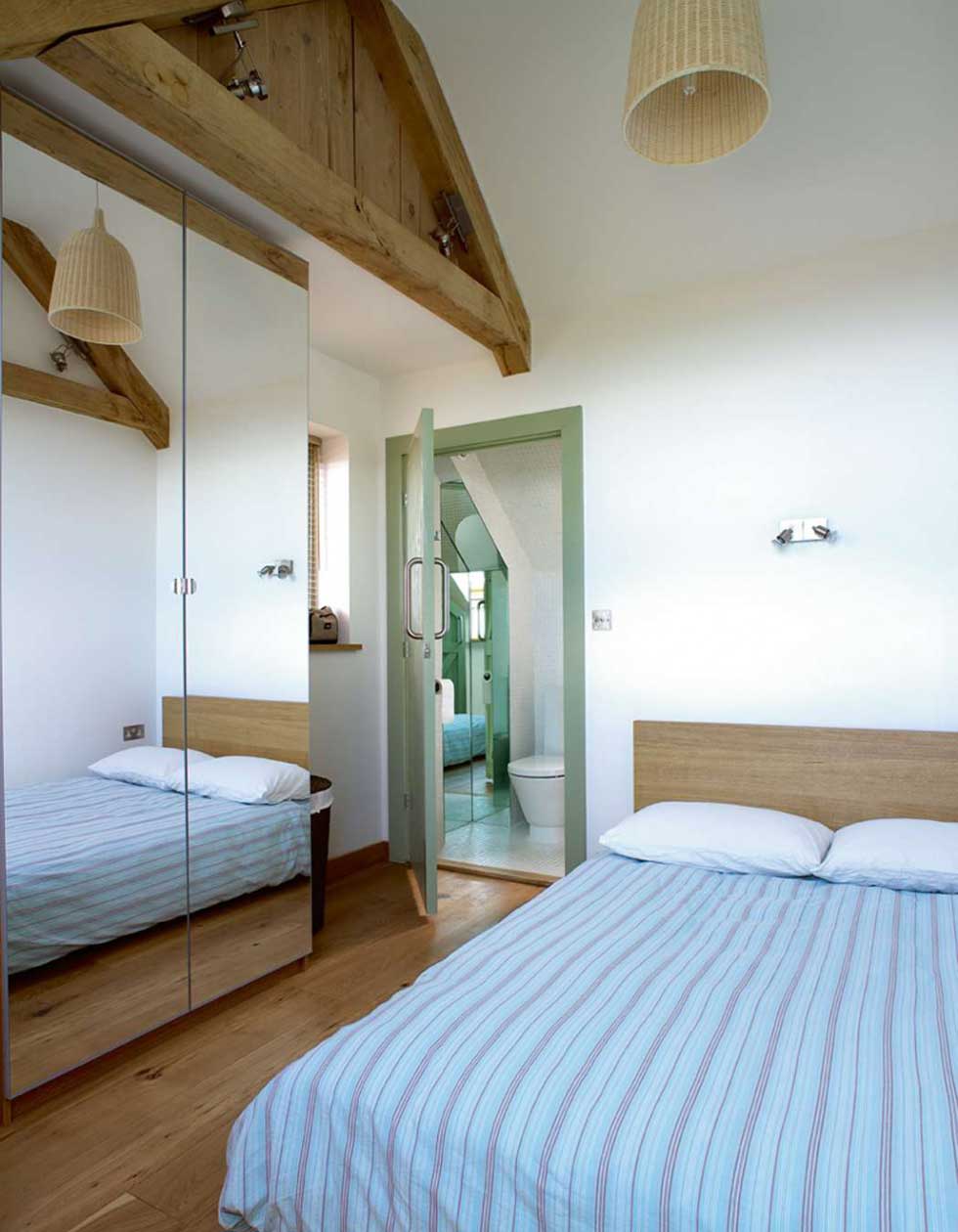 The master bedroom has an open ceiling with oak beams, and leads onto a sleek en suite

The rear of the house faces north towards the sea, which wasn’t ideal when it came to creating large window openings, but Nicky and Robin decided to sacrifice a degree of energy efficiency in return for the views – envisaging winter’s days spent in front of a roaring log fire, looking out to the stormy sea and sky.

“This was our first real encounter with the planners, and people had warned us that it would be hard work, so we were amazed at just how easy it was to get planning permission,” remarks Nicky. “We’d hoped to build a larger sitting room upstairs and this was refused, so we had to compromise on the space, but looking back it was probably the right decision for such a compact plot.”

Robin began demolishing the existing bungalow in October 2006, recycling as many materials from the old building as possible. He and Nicky rented holiday accommodation for six months during the winter, before moving into a caravan which was ultimately parked up on site. They have fond memories of this time, and of their input into the build – which involved everything from roofing to pointing stonework, laying floors, tiling and decorating.

“The biggest disappointment involved the timber frame company,” says Robin. “They really let us down and delayed the whole project for weeks, but other than that the build went extremely smoothly, and we organised subcontractors ourselves and were helped out on site by various members of our family, including Nicky’s father and her brother, who’s a stonemason.”

The new airtight cottage is timber framed, faced in a combination of Cornish cedar and natural stone, which was dug up from the site whilst excavating the foundations. Walls are fully filled with 250mm of sheep’s wool and hemp insulation, with 300mm in the roof. The floor is insulated with 110mm of Kingspan Zero ODP and windows were locally manufactured from FSC timber with low-E, argonfilled glazing, whilst reclaimed Delabole slate has been used for the roof.

Solar panels pre-heat the thermal store for the hot water supply and the underfloor heating, and a rainwater recycling system feeds the toilets and the washing machine, whilst in the upstairs living area a woodburner provides carbon-neutral heating. A ventilation and heat recovery system also recycles heat that would normally be lost through extractor fans in the kitchen and bathroom, and supplies clean, fresh air throughout the house.

Nicky took charge of organising the interiors and the bespoke oak-fronted kitchen and contemporary staircase were made to her designs, with Delabole slate floors laid downstairs and oak flooring upstairs. Natural paints have been used to decorate walls and woodwork, and low-energy lighting was specified throughout.

At just 100m² the house is relatively modest in size, but Nicky and Robin have maximised the impression of space with the high-vaulted ceilings upstairs and clever use of mirrors and glass, which reflect the light as well as balancing and complementing the natural textures of oak and slate.

Inspired by their project, the van der Bijs have launched their own company, Ecohouse, and now work together from home designing and building houses for others keen to build in an ecologically sustainable way.

“We’re really pleased and proud of the environmentally friendly, energy-efficient and healthy house we now live in,” says Robin. “We’ve both learnt a huge amount from the build, and new materials and technologies are emerging all the time. Who would have guessed that what started out as a plan to build a simple extension could totally change our way of life?”