When Lorna Harrison’s parents considered diversifying and transforming their barns into holiday cottages, she saw a golden opportunity to fulfil a lifelong dream of returning to live on the family farm.

Wanting her sons to enjoy the same upbringing she had, Lorna proposed that she and her husband Chris could buy one of the barns together with an adjoining granary to become their family home.

The buildings, which consisted of a granary and hayloft alongside a former farrowing unit, featured high concrete floors and large cart openings along the rear elevation. To the back of the barn there was a covered courtyard full of farmyard paraphernalia. 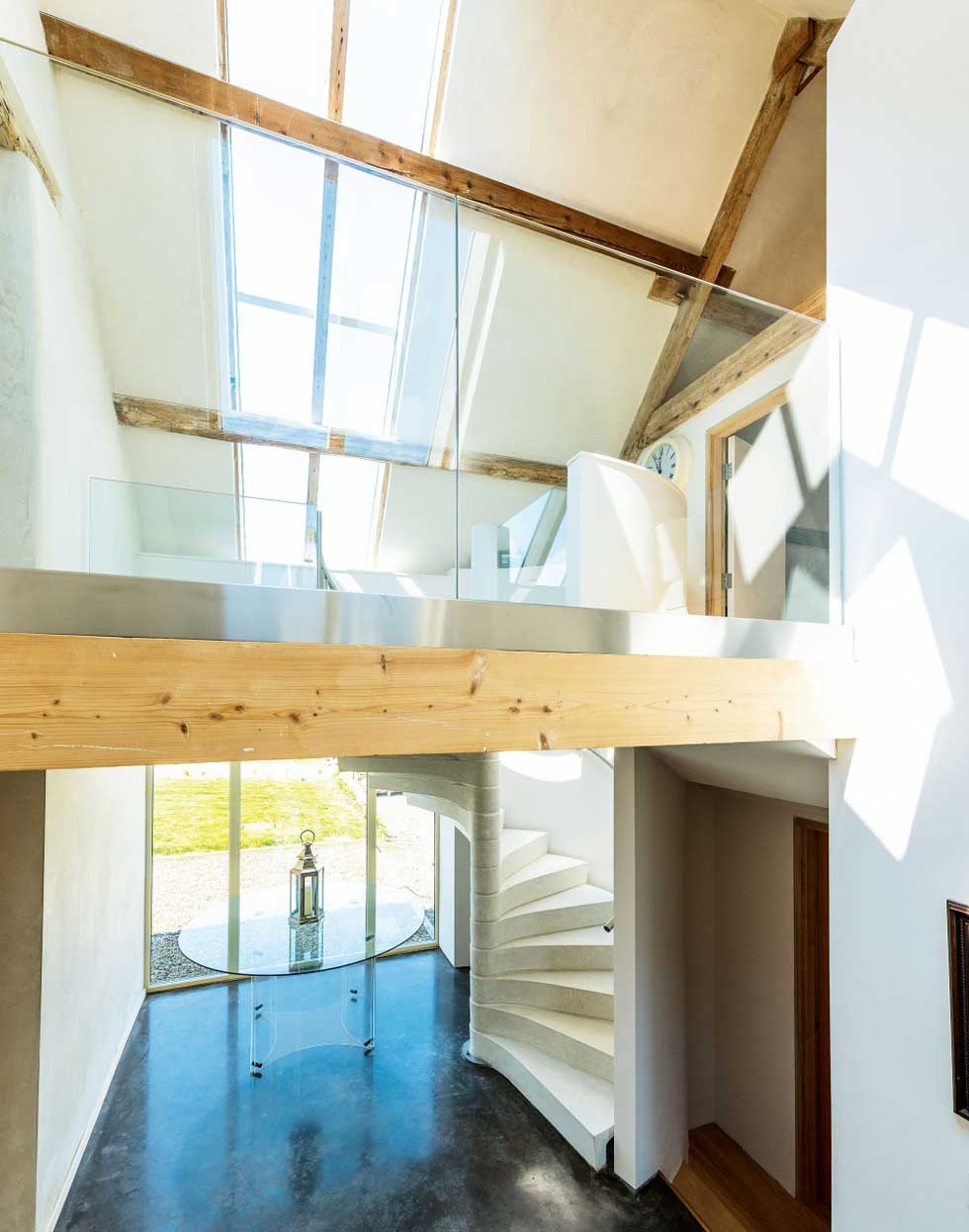 The white precast concrete staircase from Spiral UK acts as a focal point in the hallway, which also features a polished concrete floor. Rooflights from The Standard Patent Glazing Company and full-height windows and doors in this space provide natural light

The 300-year-old buildings are located in the North York Moors National Park. The couple had to apply to the Park Authority to change the existing planning permission — switching it from the development of holiday cottages to conversion of the barns into a private dwelling.

They wanted to create a modern home with lots of windows and fortunately the barn had plenty of existing openings for glazing. They also wanted to connect the granary and hay barn with a glazed link and extend the existing rooflights.

Having heard lots of stories about the difficulties faced getting planning permission in a national park, they worked closely with the North York Moors Park Authority and found that communication was key. They also discovered that planners dislike ‘mock’ features, so their contemporary scheme with plenty of eco elements was well received. 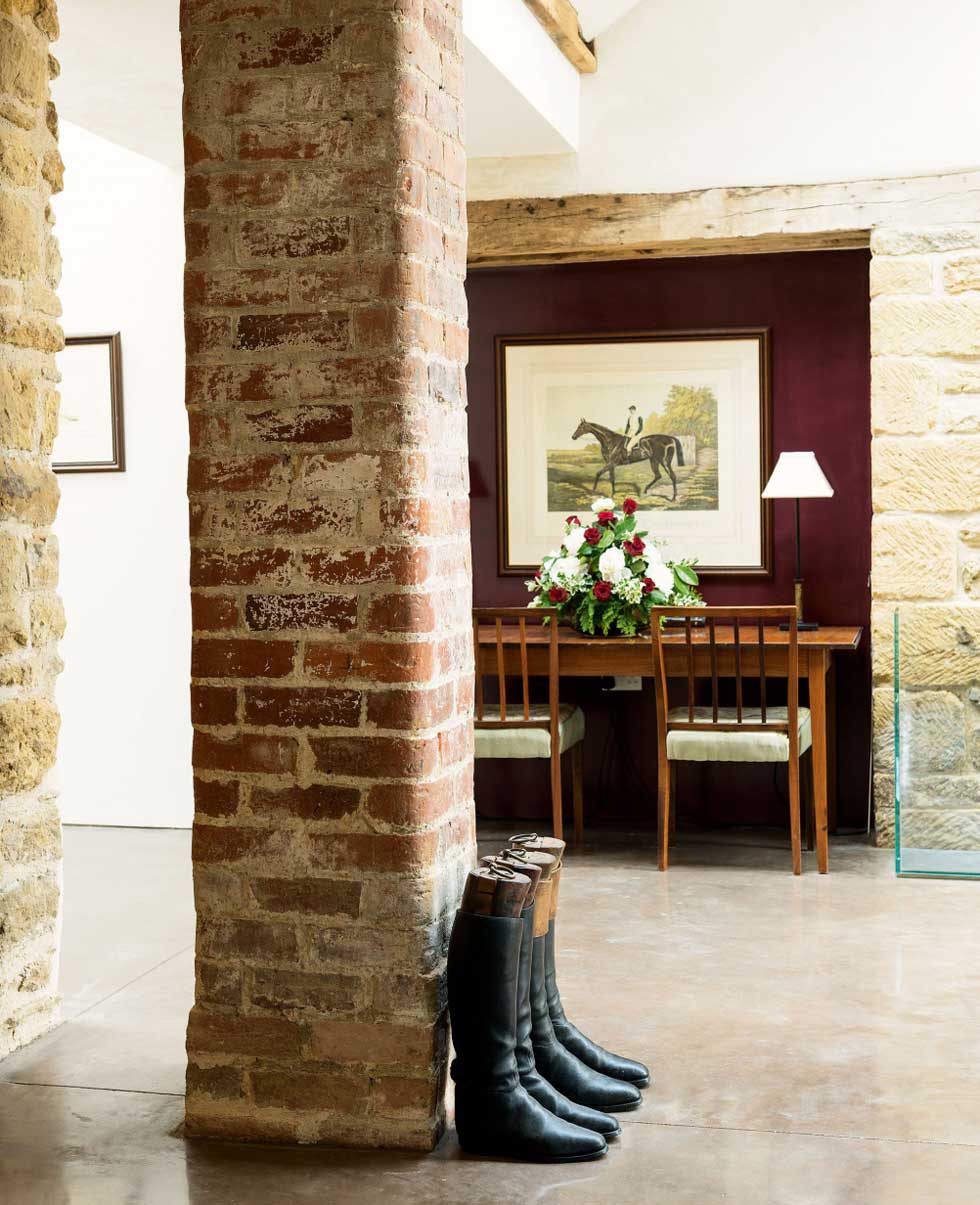 Leading on from the kitchen, Chris’ passion for elegant furniture is reflected in the dining table in the open plan dining hall, where the exposed structural hip beam, straddling the former granary, and polished concrete floor nods to the building’s former use

The couple employed an architect to provide detailed drawings. Their brief was for a modern home full of contemporary design ideas, which worked sympathetically with the barn’s beautiful rural location.

They wanted a fresh style which would work well with Chris’s love for mid-century Danish furniture — so clean, crisp lines and a palette of materials including maple and polished concrete flooring were chosen. The downstairs living space is largely open plan and full of light, with adjoining offices, a snug and a drawing room.

A steel frame was built inside the shell of the original hayloft to create a second floor, accessed via a precast white concrete staircase. The first floor now features three bedrooms (one with a wetroom) and a family bathroom to one side, with the large master bedroom with a dressing area and en suite to the other. To increase the living space even further, the couple added a mezzanine level over one third of the kitchen. 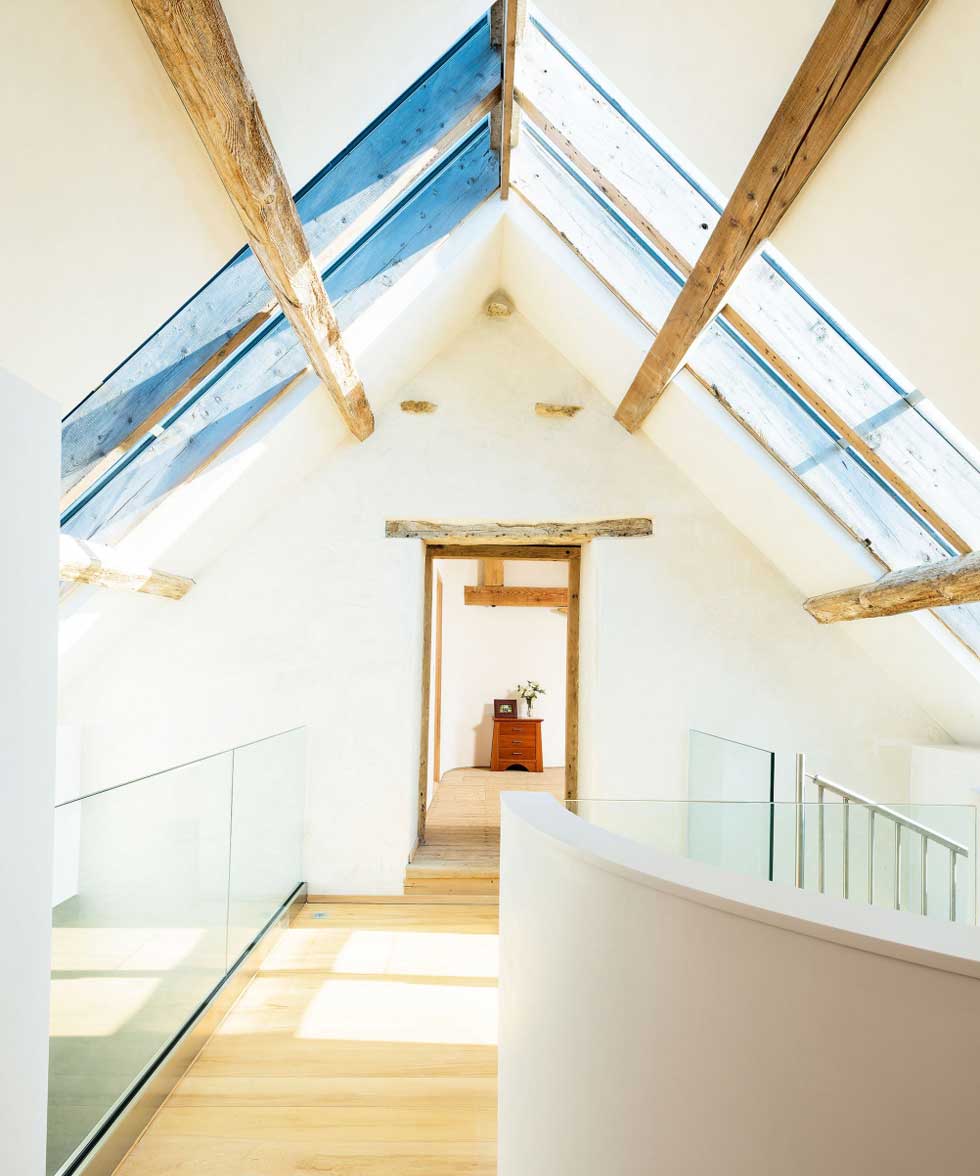 The new glazed landing and precast concrete spiral staircase join the two sides of the building, while extended rooflights follow the roof pitch and bring natural light into the centre of the home

Lorna and Chris wanted to preserve the original building, while enhancing it for the future. With this in mind, their first job was to ensure the building was well insulated, which they did using wood-fibre boards, hemp and sheep’s wool.

They also followed a mantra to reuse, restore and recycle (by salvaging as much of the existing building as possible), and chose sustainable building materials where possible. Finally they installed a biomass heating system, solar thermal panels, triple glazed windows and opted for eco-friendly paints. 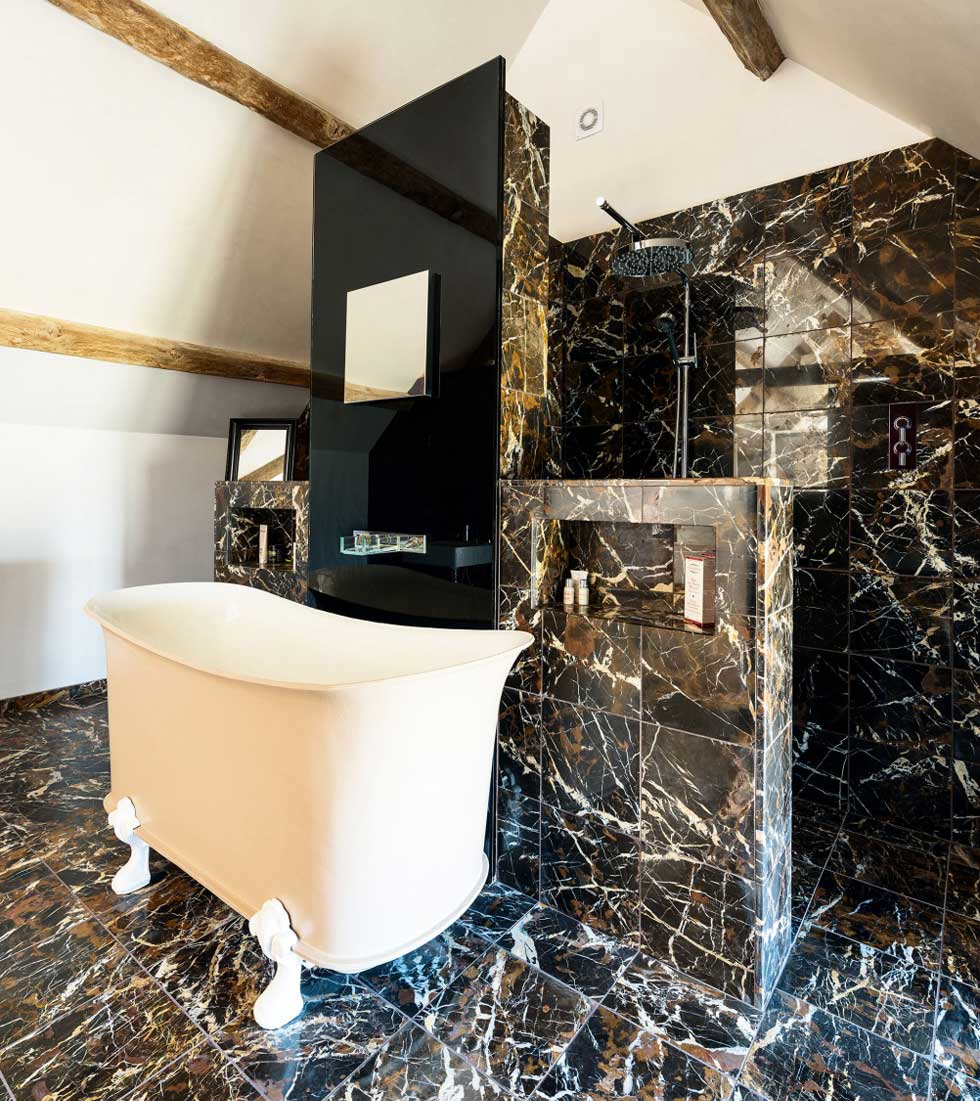 Lorna cites the bath as their best buy, as “it would have cost a small fortune if Chris hadn’t done his research.”

The couple initially hired a main contractor who cleared the site. Soon after, the couple moved to rented accommodation near to the barns so that they could take over the project management themselves. They employed a foreman to keep everything running smoothly on site, but researched, sourced and ordered all of the materials themselves.

The interiors were taken back to a shell and the high floors dug out to reduce the levels, ready for underfloor heating and insulation. The 300-year old building had to be underpinned and the stonework repointed with lime mortar, before the roof was rebuilt using a combination of pantiles salvaged from the roof and locally sourced reclaimed tiles.

In order to support the 300-year-old building, a large hip beam was replaced to keep the old structure intact. Once the structure was addressed, they set to with the finishes. Lorna saved thousands of pounds by decorating the entire house herself — a task aided by the fact that the ceilings were already finished in a polished lime plaster which didn’t need painting.

The couple worked hard every evening and weekend to keep the project on time and on budget. And, although Lorna wouldn’t want to paint another building of its size in a hurry, their commitment paid off, resulting in a stunning contemporary interpretation of rural architecture.