The Overall Winner of this year’s Daily Telegraph Homebuilding & Renovating Awards is living proof that modern design can also make for a warm, comfortable and practical family home — indeed, it rather leaves you wondering why everyone else doesn’t do it quite like this.

While this remarkable self build in south-east London, the home of architect Jake Edgley of Edgley Design and his family, now oozes effortless style, the starting point for the project was not without its challenges. Indeed, the Edgleys faced a six-year long journey battling the plot itself, risking the unknown in the process.

The plot in question had originally been a Victorian fruit orchard, but had since become a derelict backland site surrounded by houses and filled with trees growing from piles of rubbish. The neighbours were nervous about the trees on site being cut down, so the council had agreed to place a blanket Tree Preservation Order on the site until an agreement could be reached on which trees needed to be removed — a process which took a year. Despite receiving 70 objections, the Edgleys won planning permission at appeal.

“The bank said they’d fund the project and we started clearing the site using our savings, but then the bank turned round and said they couldn’t see the point of what we were doing and wouldn’t lend us the money. We had to sell our house as fast as possible and move into rental to fund the project.”

“When I first stepped on site I was attracted by the wilderness appearance and could envisage a house snaking around the existing 100-year-old pear tree on site, creating an internal courtyard design which allows the house to look inward and offer privacy,” says Jake. “As the pear tree’s root protection area spans the full width of the site, however, the house ended up in two halves and the only way of connecting the two was to build a bridge structure which doesn’t touch the ground but instead sits on steelwork.”

With a friend working as site manager and teams of people on board to handle the different tasks one section at a time, everyone worked hard to get the project done.

The concrete used in the structure provides the building with a lot of thermal mass. The solar-coated glazing on the southern elevations also prevents overheating in the summer months. The use of low-toxicity products was also a key part of the brief. 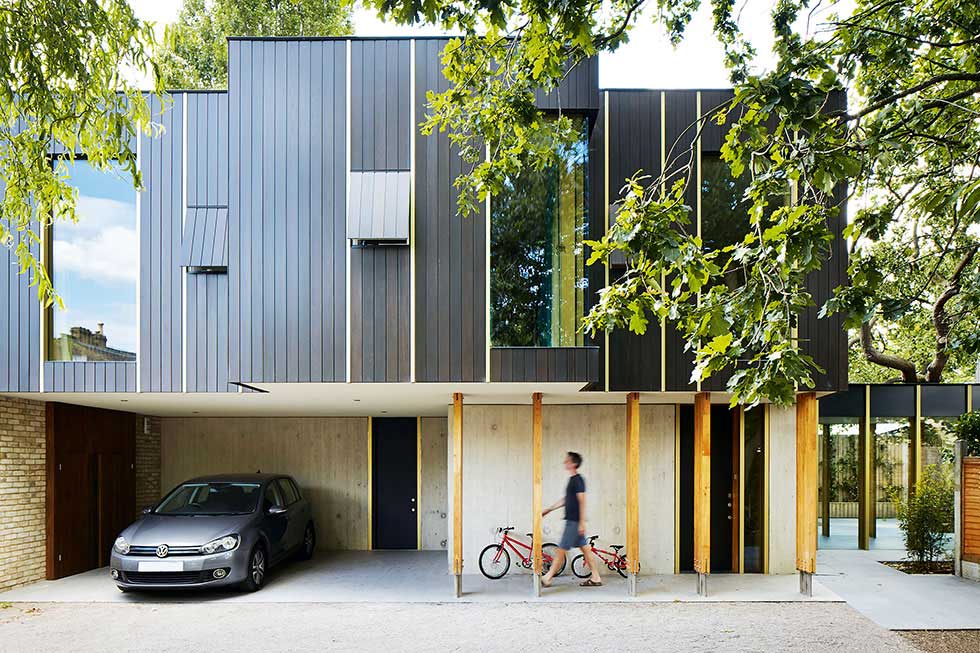 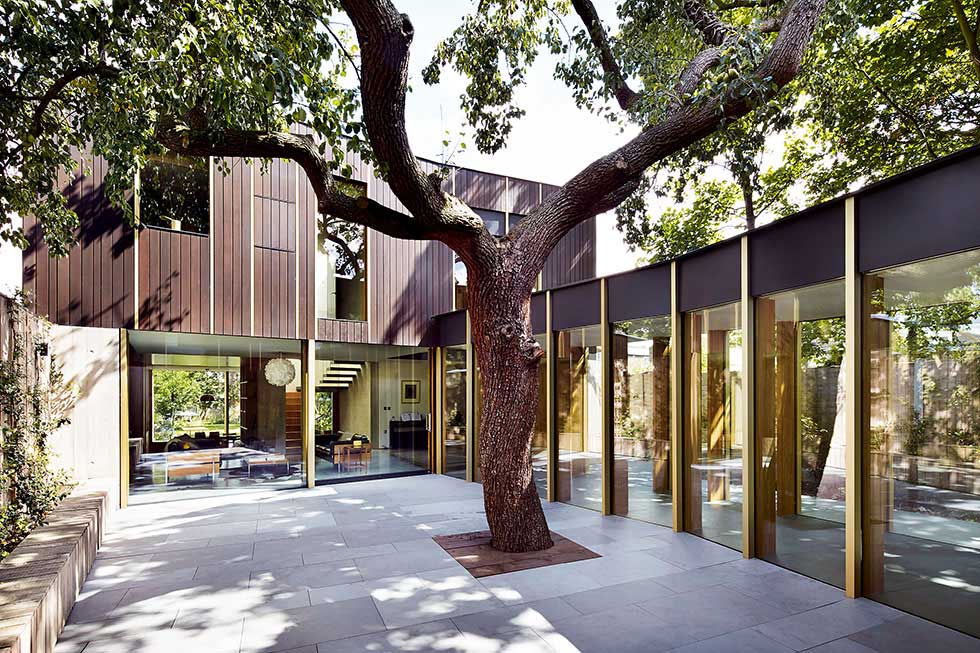 In order to preserve the 100-year-old pear tree on site, the home has been designed around the tree. This has lead to the creation of an internal courtyard, which provides the house with both privacy and light 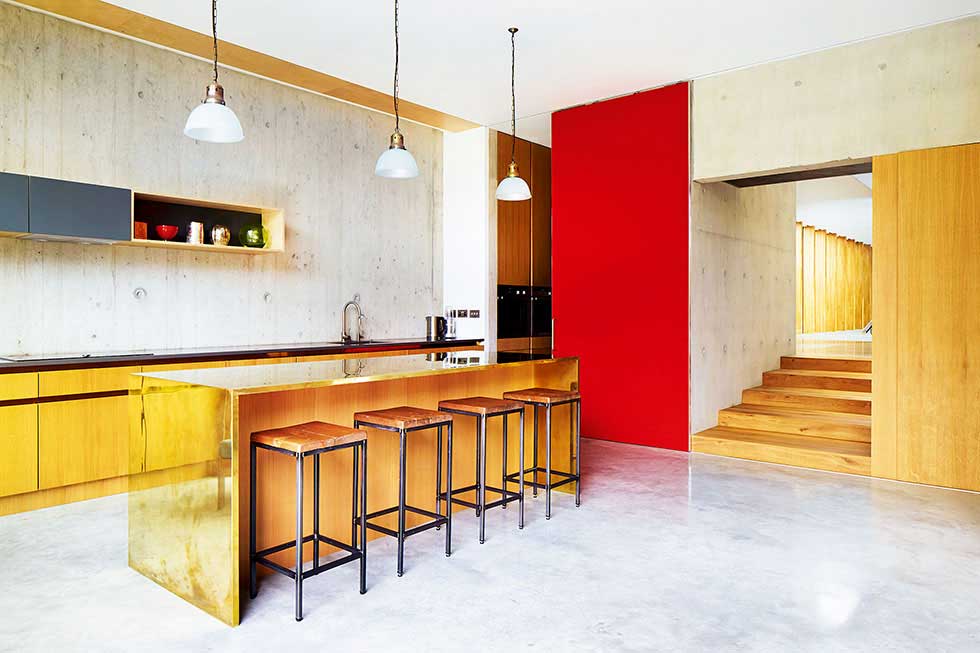 Stepping down from the snug, the kitchen is a lesson in pared-down style, with warm oak joinery and brass trim sitting alongside polished concrete flooring and shuttered concrete walls. High ceilings here also provide visual impact 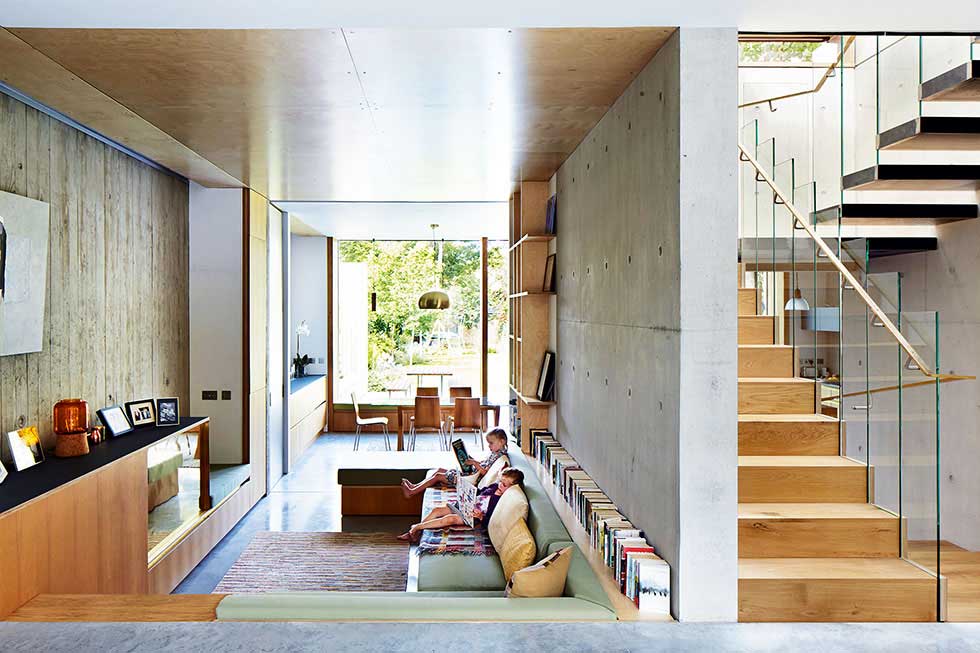 Ideal for keeping an eye on the kids from the formal living space, the snug acts as a cosy retreat. With built-in seating it’s perfect as a reading spot or for watching TV (which is hidden behind the joinery when not in use) 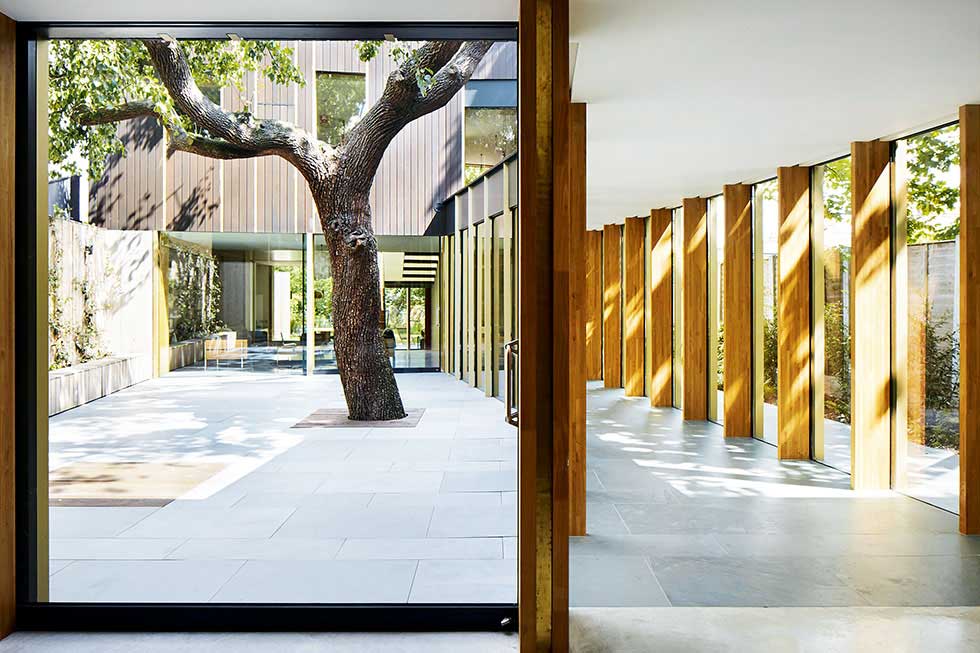 This contemporary home is built in two halves, joined by a bridge — this glazed walkway is on the same level as the ground floor but is supported beneath by steelwork, designed to accommodate the pear tree roots 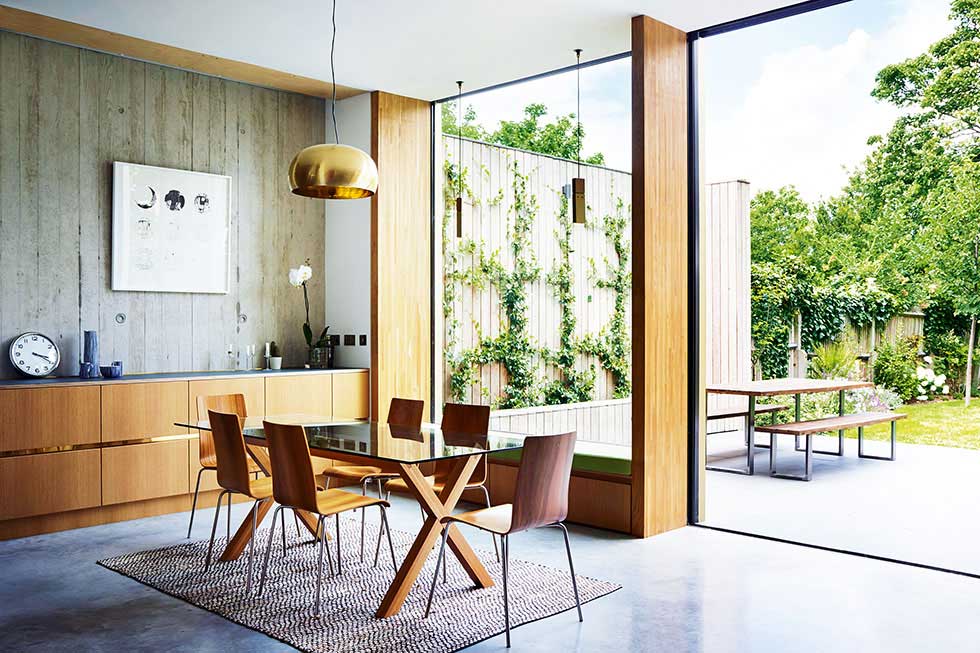 Open plan to the kitchen and snug, the dining space provides uninterrupted views of the garden and terrace thanks to full-height glazed sliding doors from Fineline Aluminium. The gold trim on the joinery here is a subtle nod to the gold running down the exterior, and the timber formwork used to create the concrete walls was recycled for the garden fencing 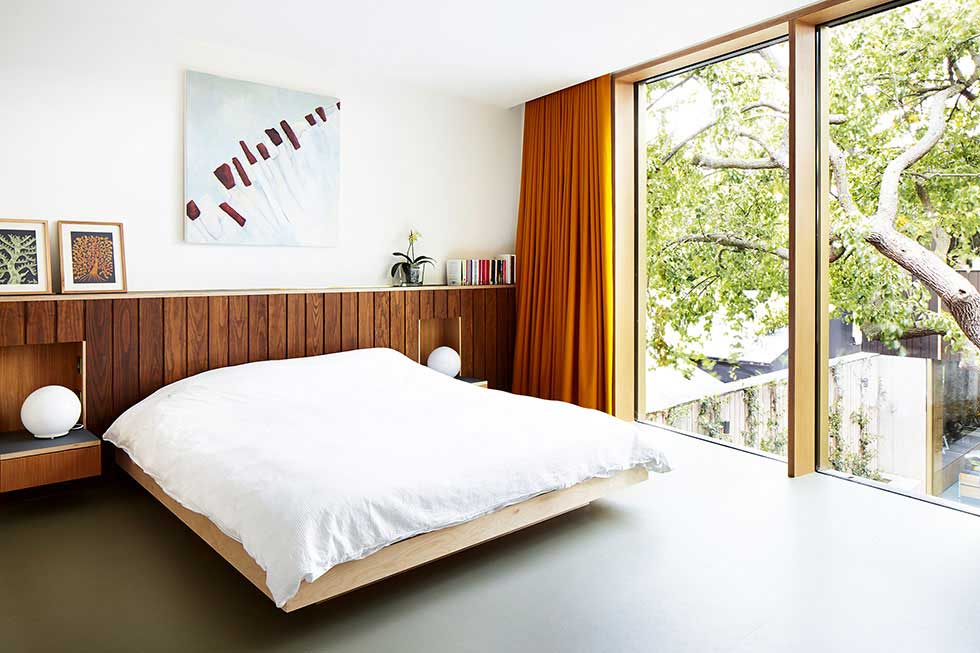 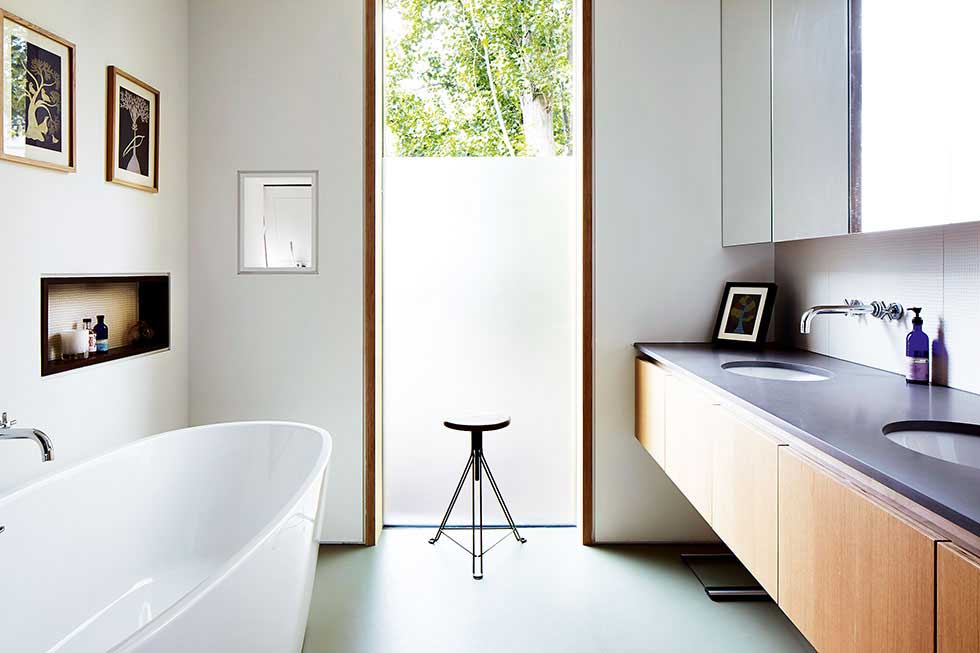 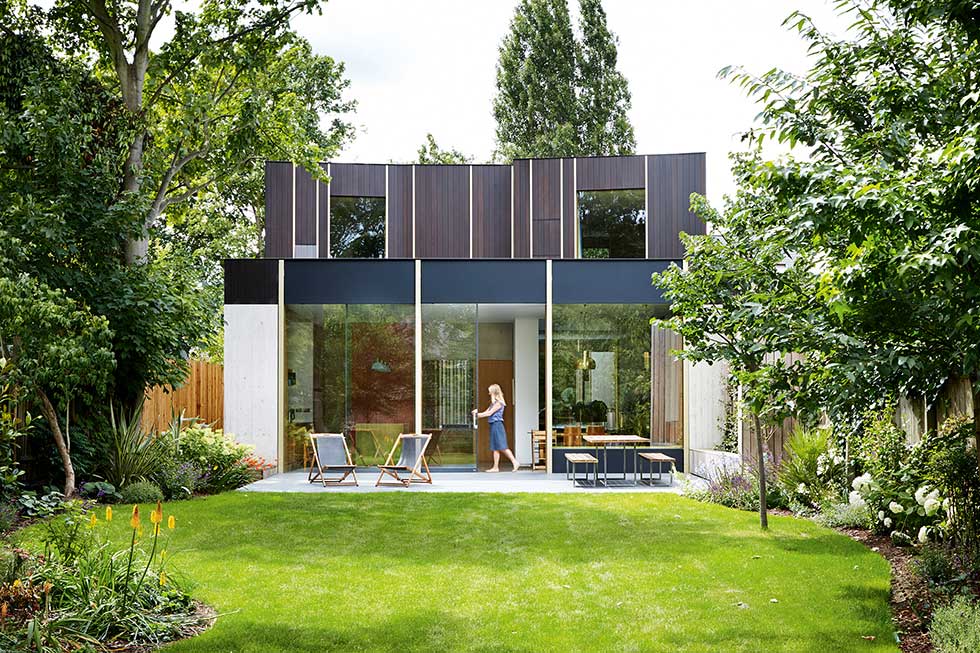 Concrete walls, cast in situ within timber formwork, dominate the ground level, while timber cladding (pine, stained in Sikkens) above allows the house to nestle among the surrounding trees. Slim gold trims help break up the mass of the building and frame the large glazed panels