When Carl Turner set his heart on converting a rambling Norfolk threshing barn into a rural retreat, his long-term partner, Mary Martin, harboured some serious reservations.

“She realised it would cost far more money than we had, but she also knew just how much I wanted to take on the project,” Carl recalls.

Ochre Barn is a vast brick and pantile Victorian barn situated on a rural plot on the Norfolk/Cambridgeshire/Lincolnshire border. Carl is an acclaimed architect with his own practice based in London, who decided to manage the conversion and take a hands-on approach to the building work.

“The barn stood in the middle of a field with no services, four crumbling walls, a pantile roof and dirt floors,” says Carl. “We used our savings and paid the farmer £175,000. The barn came with outline permission for one residence, but we needed to reapply with our own scheme, which included a new-build studio clad in black timber, which replaces a derelict asbestos shed.” 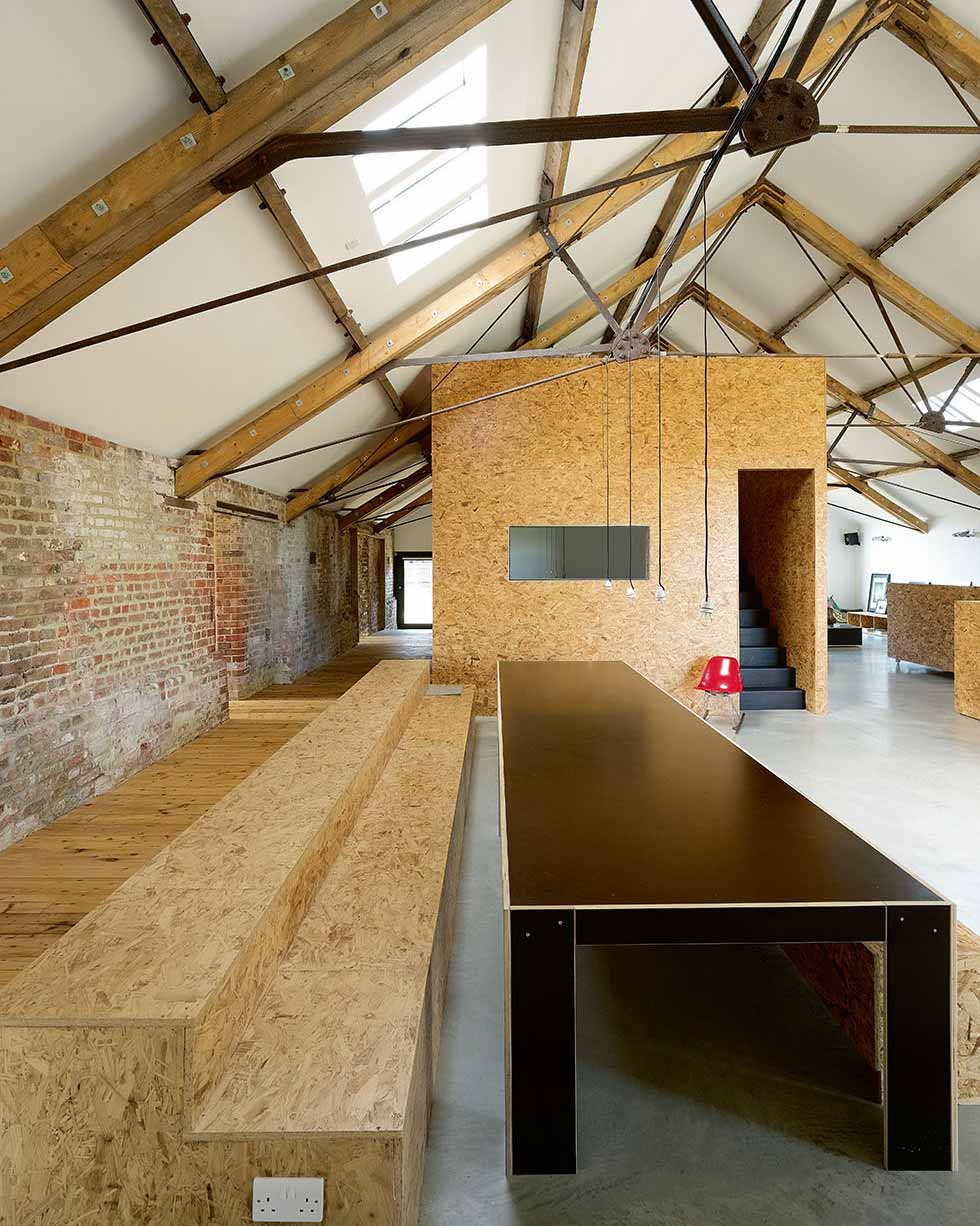 Later it became apparent that the barn’s structure was in even worse condition than Carl and Mary had originally believed. One of the roof trusses had snapped, which caused a domino effect and pushed purlins out through a gable wall. “We effectively had to sandwich each of the main trusses with two more pieces of timber, which meant that the inside of the barn needed to be scaffolded – all at great expense,” says Mary, who works in a London advertising agency. 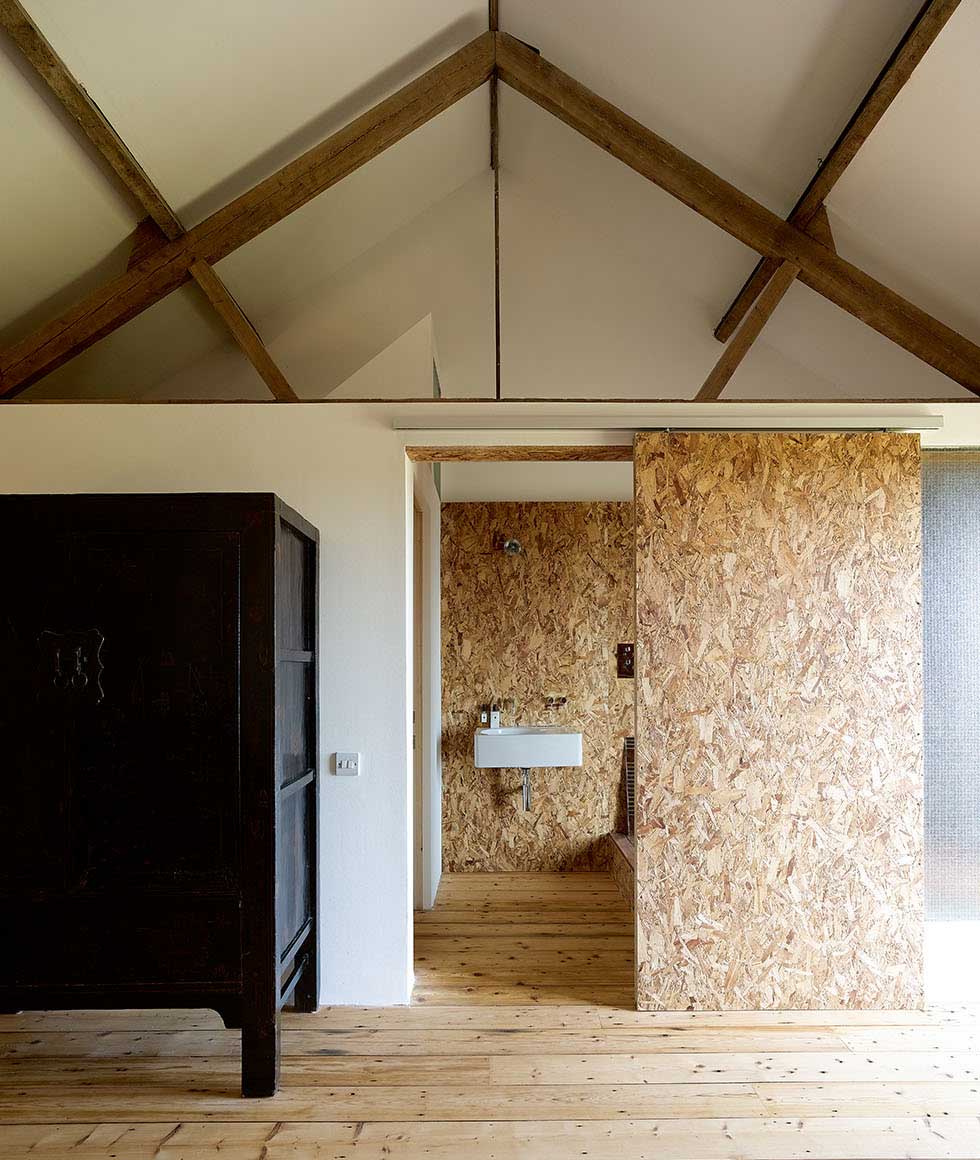 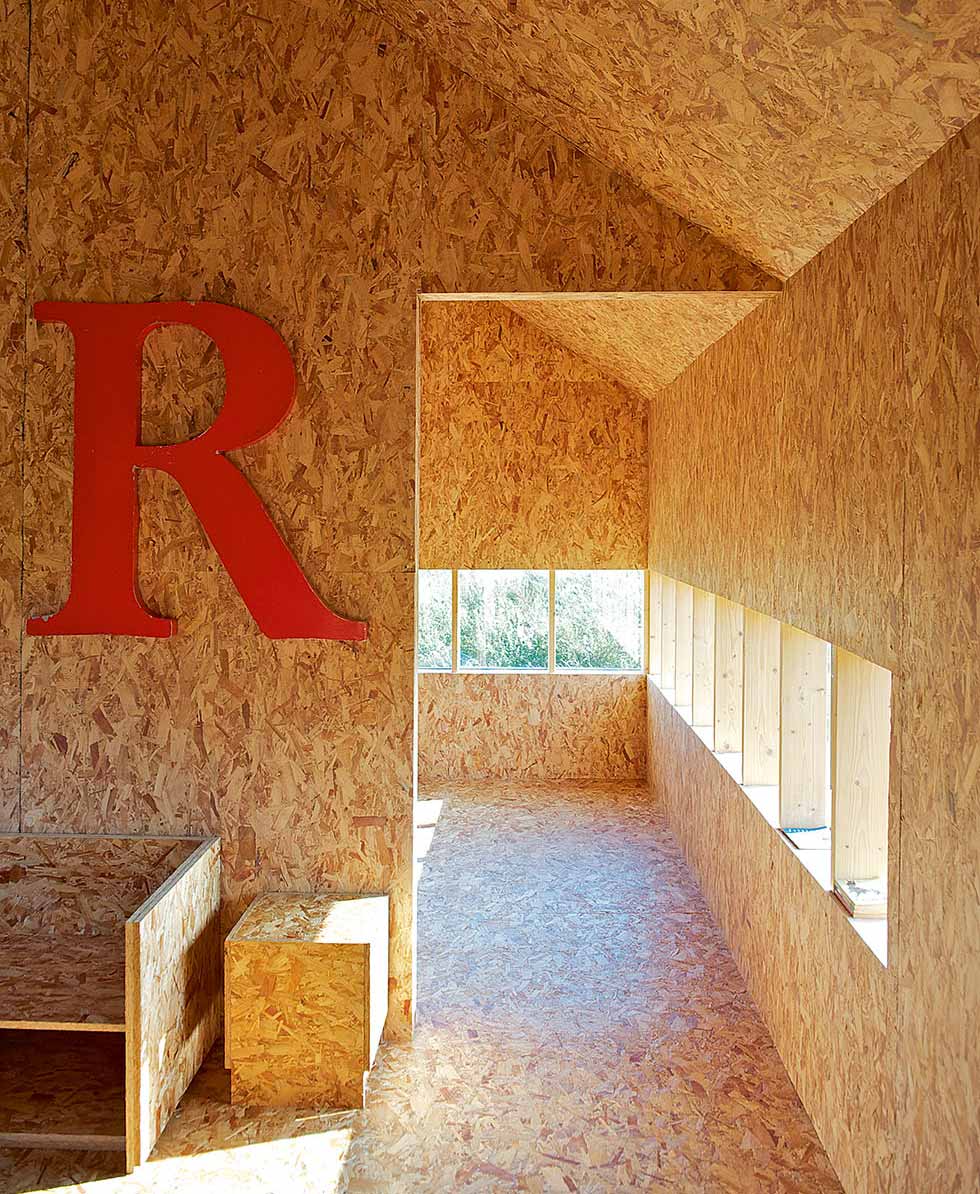 “We had £120,000 budget, and spent nearly all of that just repairing the shell of the building,” Carl admits. “It was at this point that I realised I’d bitten off more than I could chew.” The couple had originally taken out a self-build mortgage for the work, but were later advised to convert this into a commercial loan — which the bank called in towards the end of the project, thanks to the onset of the credit crunch. At this stage Mary and Carl feared they could lose everything, but ultimately they ended up with an expensive personal mortgage and were able to complete the fit-out on a largely DIY basis.

“Costs needed to be kept to a minimum and at first we thought we would use left-over and reclaimed materials, but over time we decided that we preferred a more contemporary feel internally,” Mary explains. 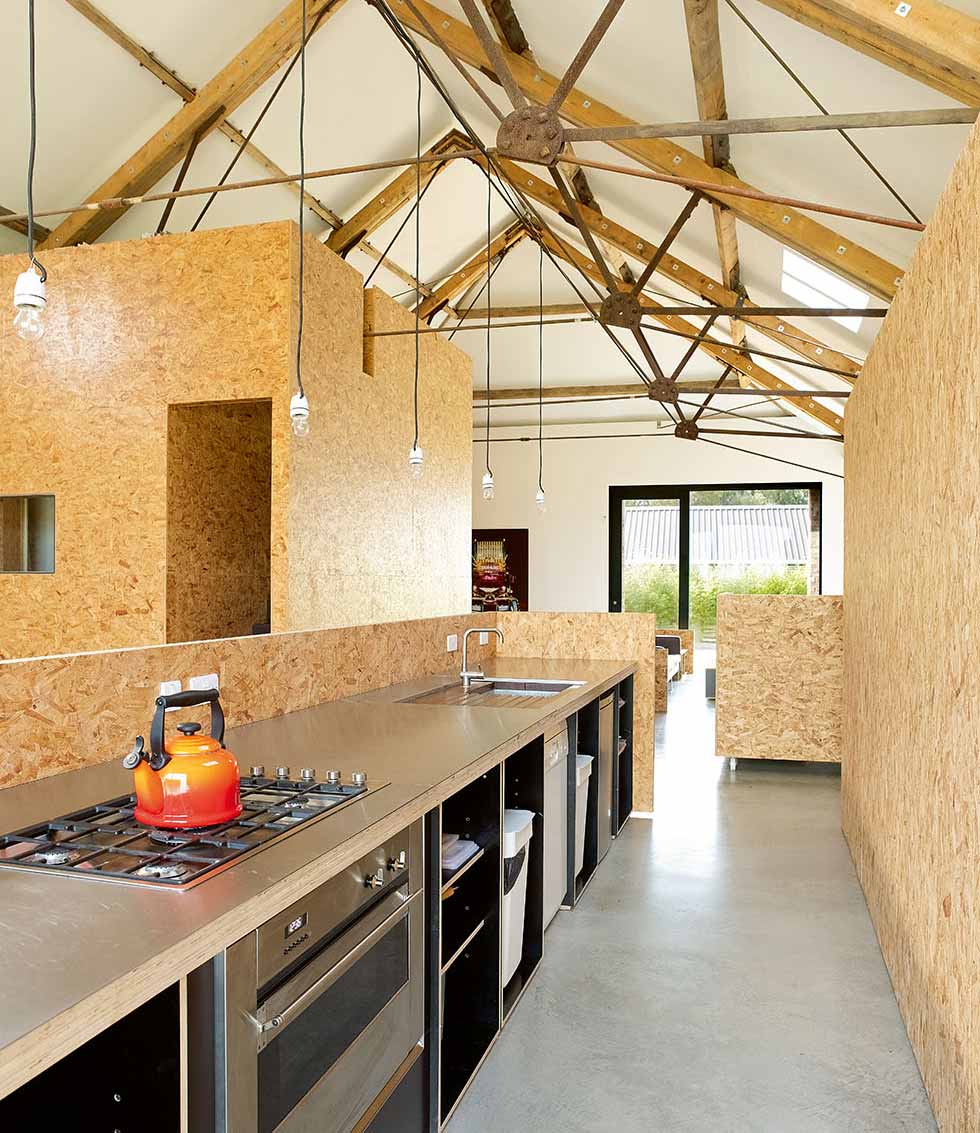 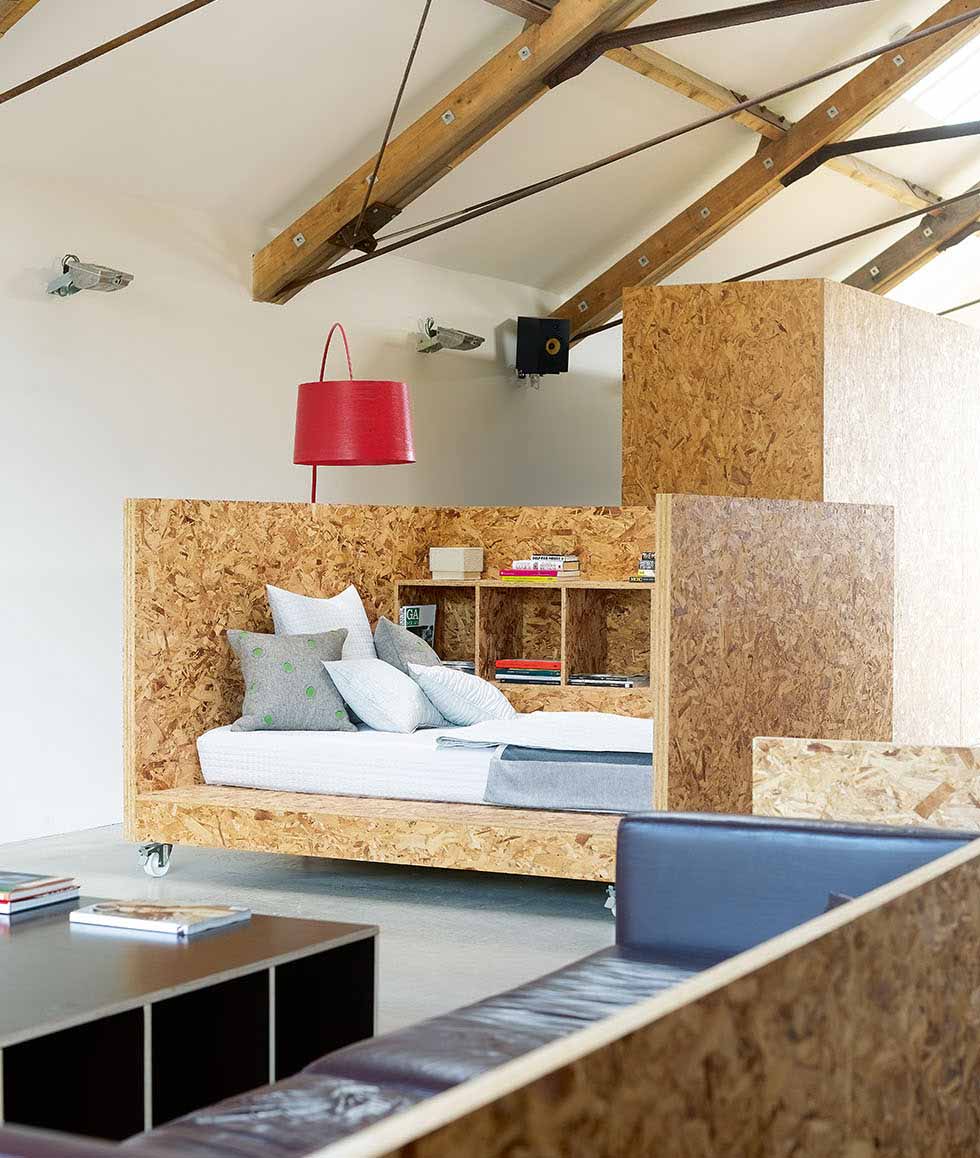 This has been achieved by constructing almost all the interior fittings and fixtures from OSB — an unusual choice of inexpensive material which, coupled with the concrete floors and exposed roof structure, brings an industrial feel to the interiors. Many of the pieces were built by Carl, who regularly drove from London to stay at the barn. 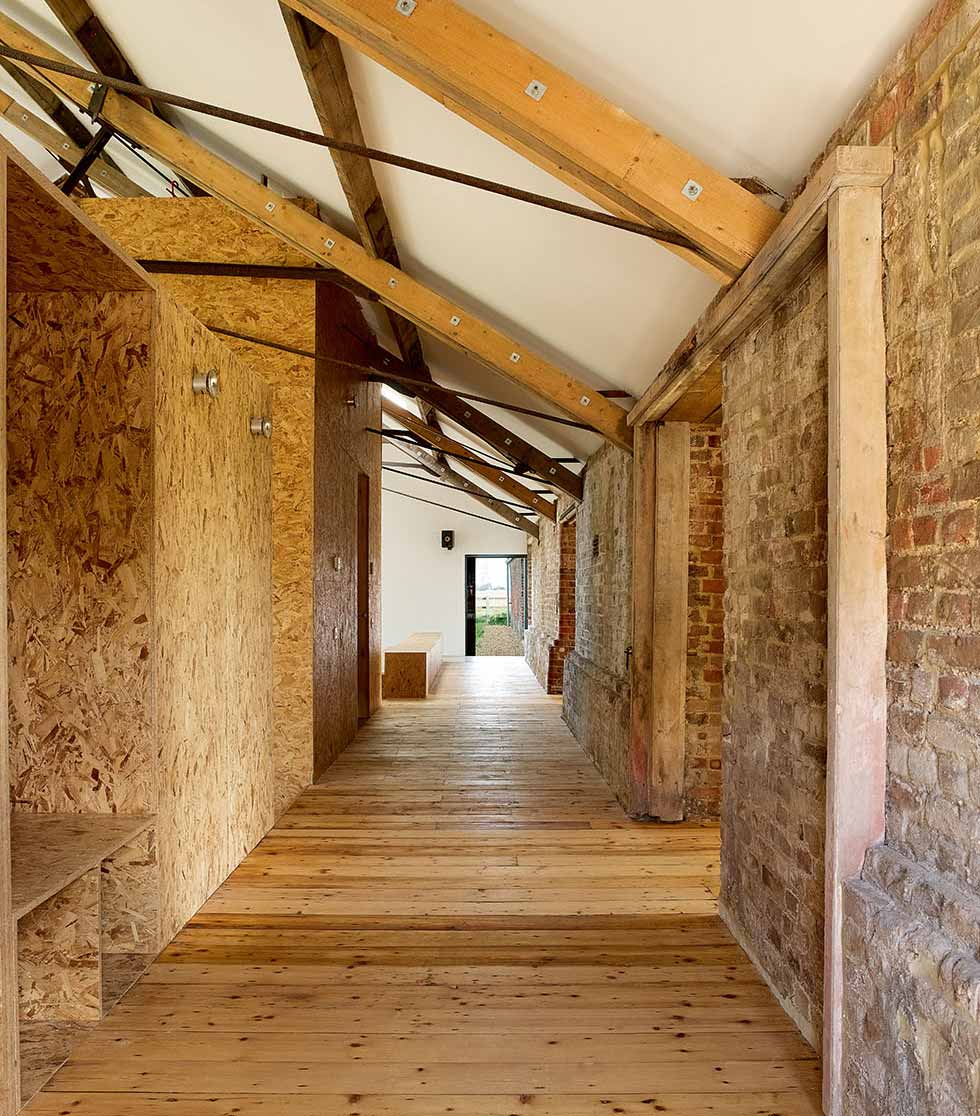 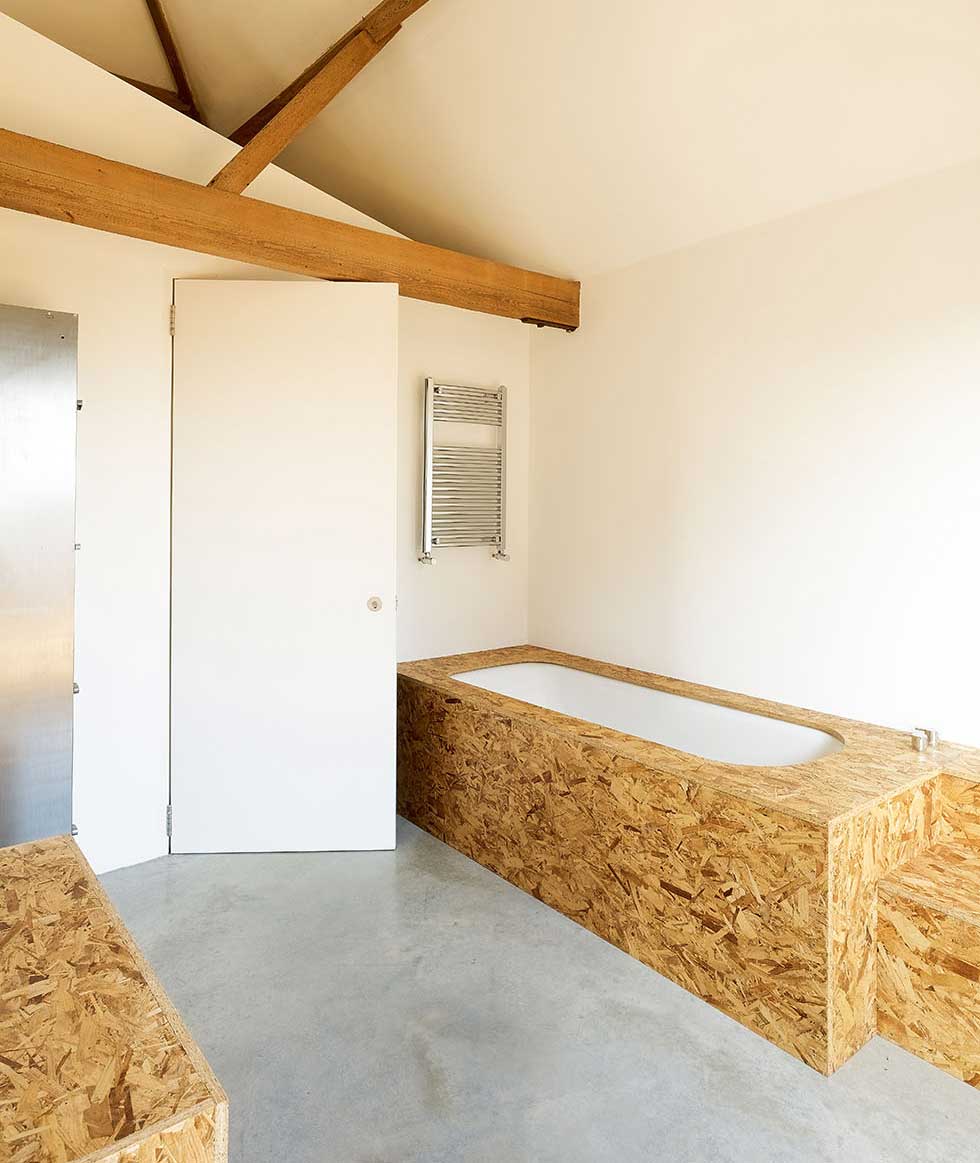 He and Mary were extremely hands-on, learning how to drive a JCB to dig out the barn floor, laying underfloor heating and generally labouring at weekends – and even one Christmas day. They employed local subcontractors for more specialist work, including the roofing and pouring the concrete floor.

The final stage was to build the new studio, which contains a bedroom, a bathroom, kitchen and living space. This structure serves as flexible guest accommodation and incorporates extensive glazing, giving wonderful views of the local landscape and the huge skies for which the area is renowned.