Jon and Muriel Wallsgrove’s new Thameside home is a true one-off thanks to clever sourcing, smart design and, above all, the energy of its owners.

When a plot came up for sale just a few hundred yards up the river from their existing home, Muriel and Jon knew it would be a great place to build. The riverside plot went to sealed bids which they won, bidding 20 per cent over the asking price.

In a Flood Zone 3a (the second highest level) which means that it is on land that has a 1 in 20 or greater chance of annual flooding from the river, flood mitigation had to be an important part of the design.

After buying the site the couple had a fixed budget of £350,000, so they worked out their design from there. Jon is chief architect at the Ministry of Justice, and although the majority of his experience was in designing prisons, he was able to turn his skills to residential design.

He worked on a basis of a build cost of £1,000/m² and from there aimed for a layout of around 350m². After putting it out to tender and getting quotes in excess of £600,000, they decided to manage the project themselves.

This is truly a house that combines all of Muriel (a researcher) and Jon’s years of design influences. It is partly colonial with beautiful verandas – channelling a bit of India, elements of Africa, and parts of Bermuda – all places the couple love visiting, all incorporated into their home. Its is also raised above ground level for flood mitigation (with a basement below for storage only), which helps add to the look. 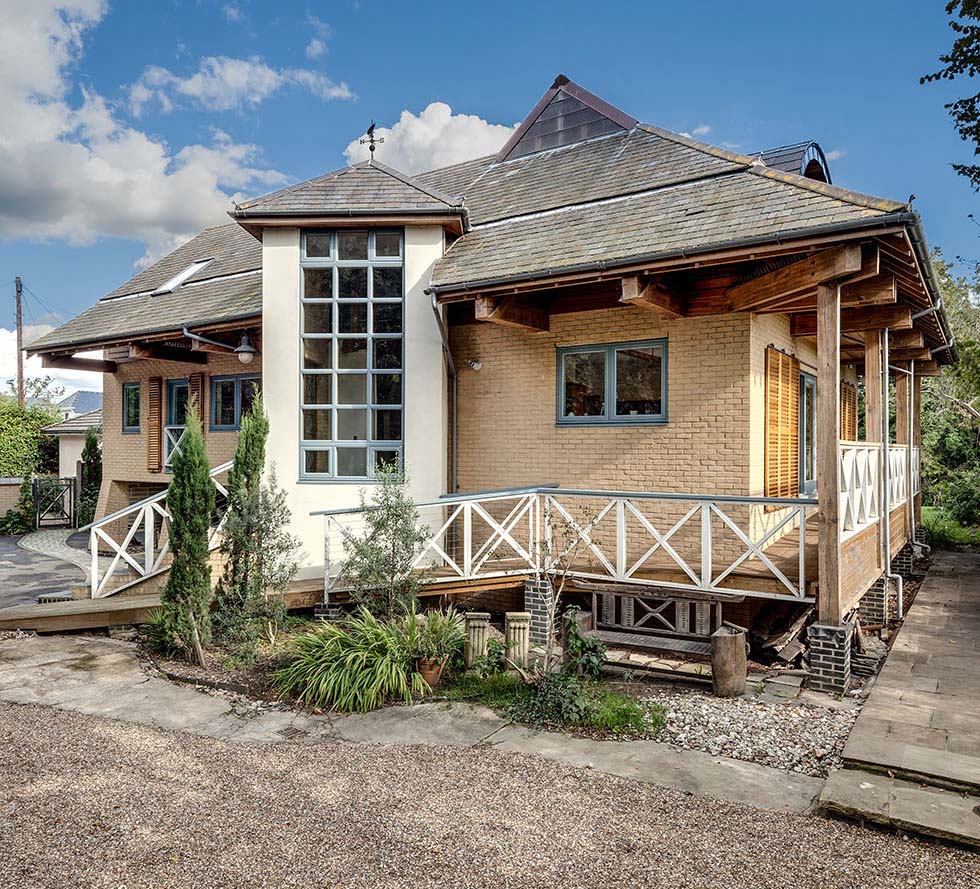 The colonial cricket pavilion inspiration is most evident in the design of the sheltering roof, which cantilevers over a veranada on the river-facing elevation. The structure lets sun into the house in winter, but helps create shade in summer and shelter from the rain

Partly this exotic feel is down to the sourcing of materials, which appears to have been a great journey of discovery, with Brazilian slates imported across the Atlantic after the UK distributor went down. There is also remarkable copper-faced asphalt shingle on one elevation.

They fell in love with some railings in France, which were bargain-price negotiated and designed into the new home to be used as balustrading on the bridged landing. Exquisitely done and brilliantly individual.

Every single buying decision has been made with absolute thought yet, at the same time, almost so randomly that everything just kind of works together in a big stylish melange.

Keeping an eye on the budget also dictated the look to some degree. The kitchen is an ex-display set of units from B&Q that the new area was effectively built around. 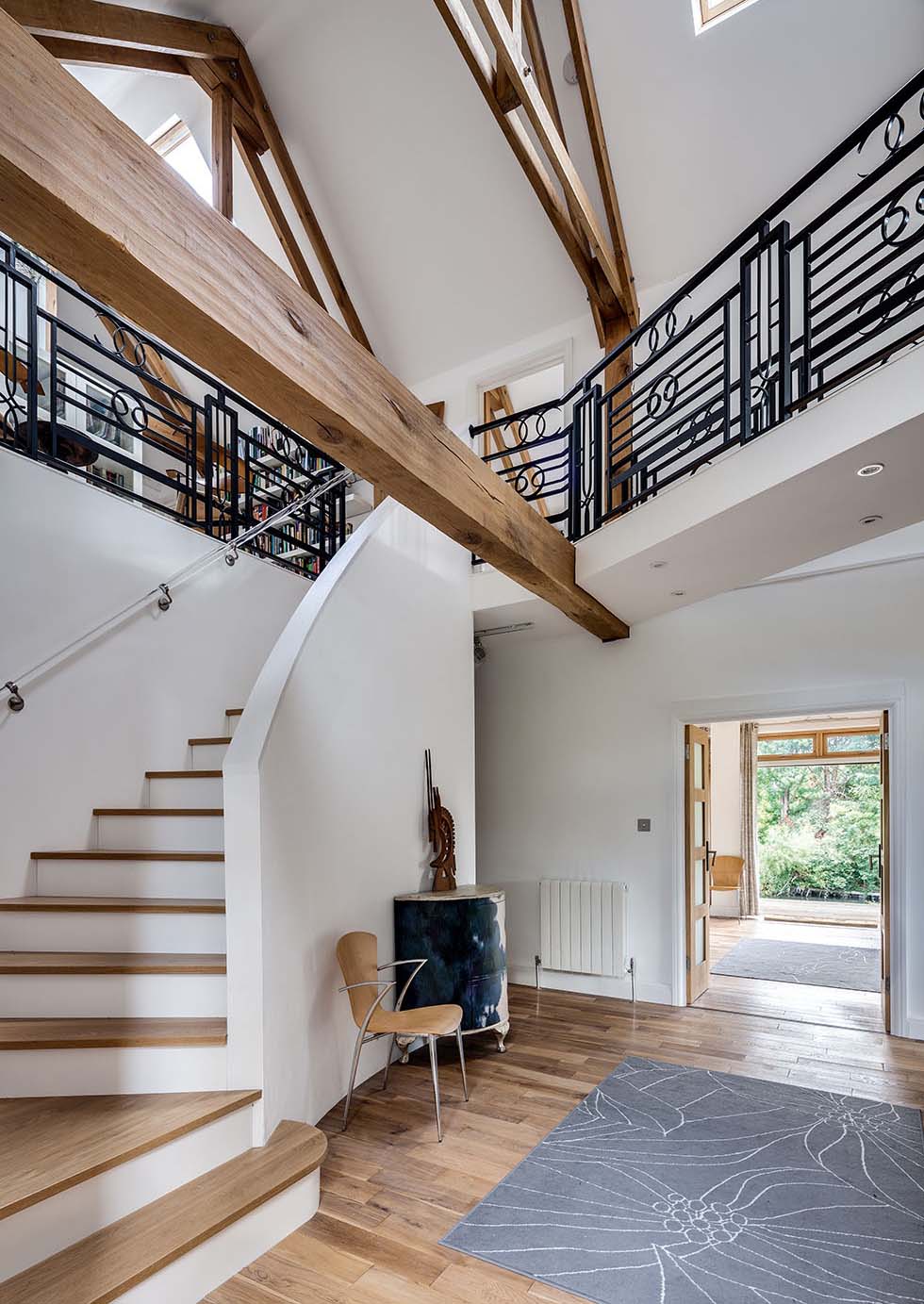 The metal art deco stair railings were a wonderful find in an antiques warehouse in Bresse (central France). The perspex stair rail is from The Plastic Shop

The Build and Engineering

The couple spent the year after they built the plot planning out as much of the project as they could before they started building. Muriel trained herself up using a Prince 2 course before work started. She was then in a good position to run the site with its hourly battery of deliveries, labour and admin. 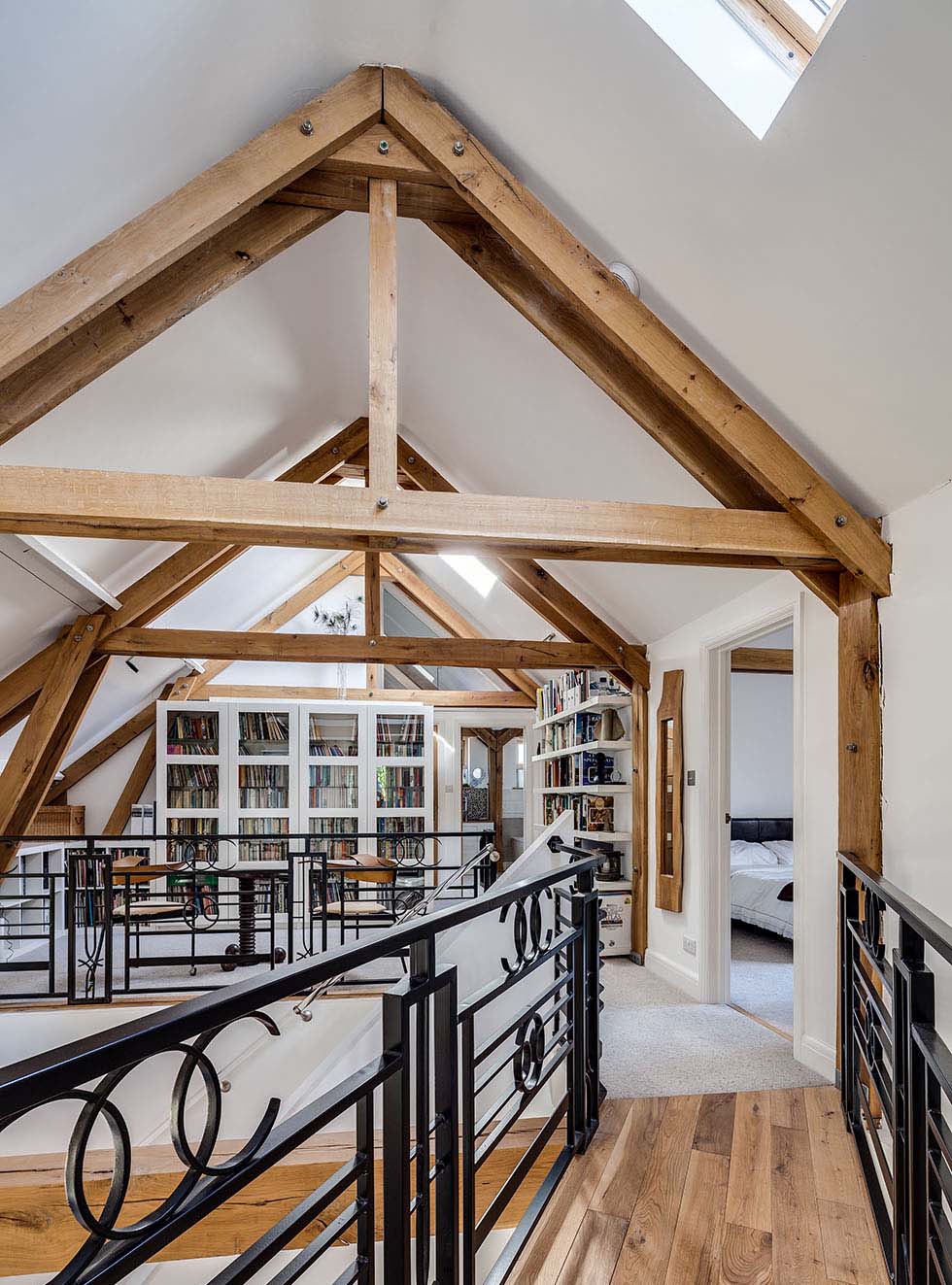 Jon has managed to create the fabulous overhang for the veranda and plenty of vertiginous space on the first floor. It’s slightly madcap but also an essential way of ensuring that architectural ‘wow’ isn’t compromised in the name of budget. The oak members were too big to plane by machine, so were hand adzed to give a beautiful finish.

In keeping with the whole looks-easy/difficult-to-pull-off ethos, the structure of the house is an achievement in its own right. However, the complex engineering Jon worked on was well worth it, resulting in a stunning, unique home at a fraction of the expected cost. 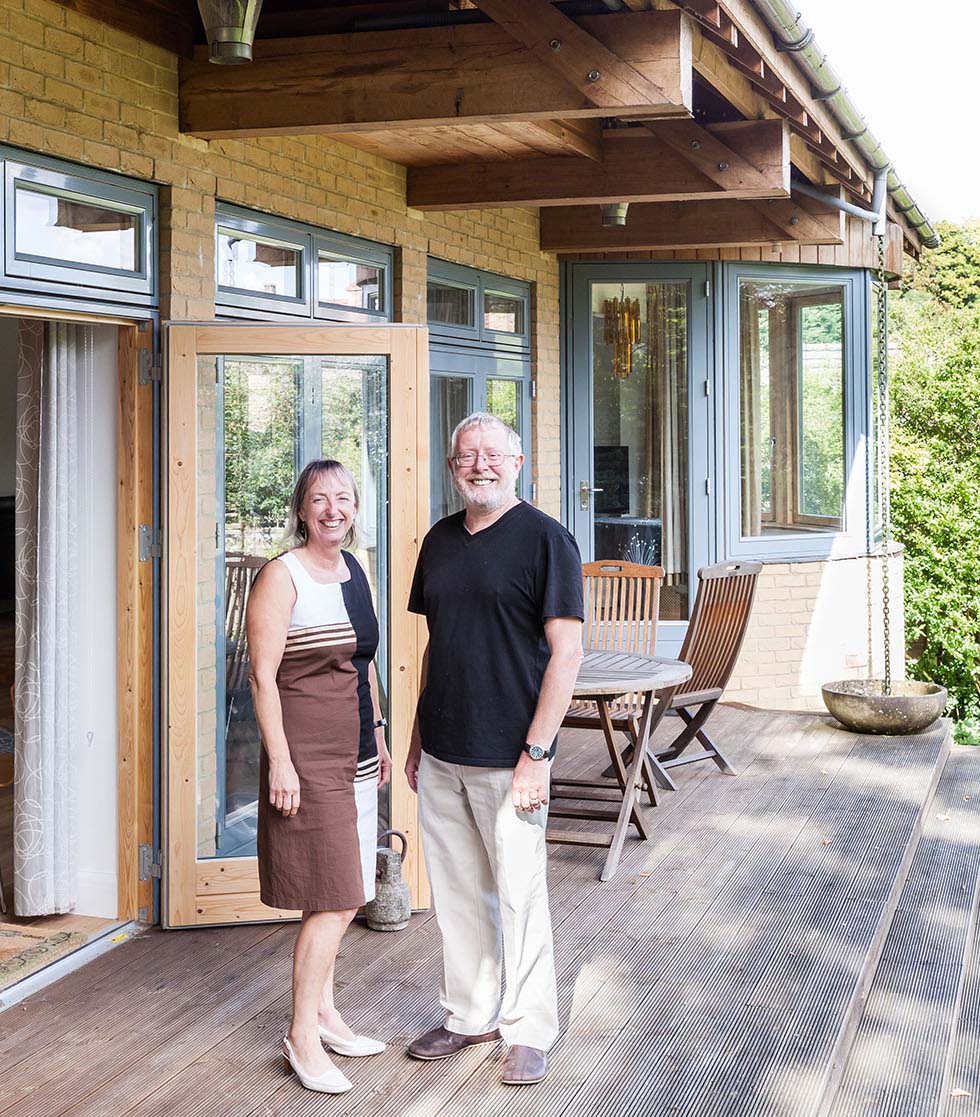