A Budget Sustainable Self Build | Homebuilding & Renovating Skip to content In 1999, historic building specialists Jerry and Jan Sharpe decided to bite the bullet and undertake their first self-build. When it came to choosing suitable building materials they only had one option if the house was to be true to their beliefs: it had to have walls built with the fabric that had been the basis of their restoration business — cob and lime.

Because of their professional background, Jerry and Jan were well aware of the problems that cob (a mixture of subsoil, straw, sand and water) can throw up as a building material. They had no experience of building even a small new extension in cob, let alone a whole house, but they were determined take on the challenge. The property that we see today is somewhat contemporary in style, being light, roomy and airy. It has an outstanding array of ecological features and is capped with a slate roof. The only sure sign that it is built from cob, just like the surrounding thatched cottages, is the thickness of the walls – 650mm, or just over 2ft.

Although all the external walls are cob, the foundations and basement are concrete. The house is built on a sloping site and Jerry and Jan were keen to make the most of this by having a semi-basement containing an en suite bedroom along with an office.

“We were quite prepared to accept that to get Building Regulations consent for a basement we would need a concrete substructure,” Jerry says. “However, we were anticipating far more problems gaining Building Regulations approval than detailed planning permission, and in the end it turned out the other way round.”

Although their former landlords in the village, Clinton Devon Estates, had identified a site in the village Conservation Area for them and offered them a third of an acre site for the very reasonable price of £35,000, they were twice refused planning permission. The first time they were told that the scheme contravened local infill policy because it was expected that more than one house should be built on such a large site. When this policy changed and Jerry and Jan resubmitted their plans, they were refused on access grounds. It was only when their district councillor called in the plans and championed their cause as a good example of sustainable development, and the local conservation officer also became involved and supported their case, that the scheme was finally passed.

All this took nearly two years, and when building finally started in the summer of 2003, it turned out to be a two-and-a-half-year process. “Because of the construction method it would still have taken two years even if we had not been at a busy period with our business and had to take ourselves and some of our team off the job at times,” Jerry says. “Building in cob is not exactly a fast process anyway. There is huge bulk involved in building such massive solid walls, and heaving the material around is very labour-intensive.” 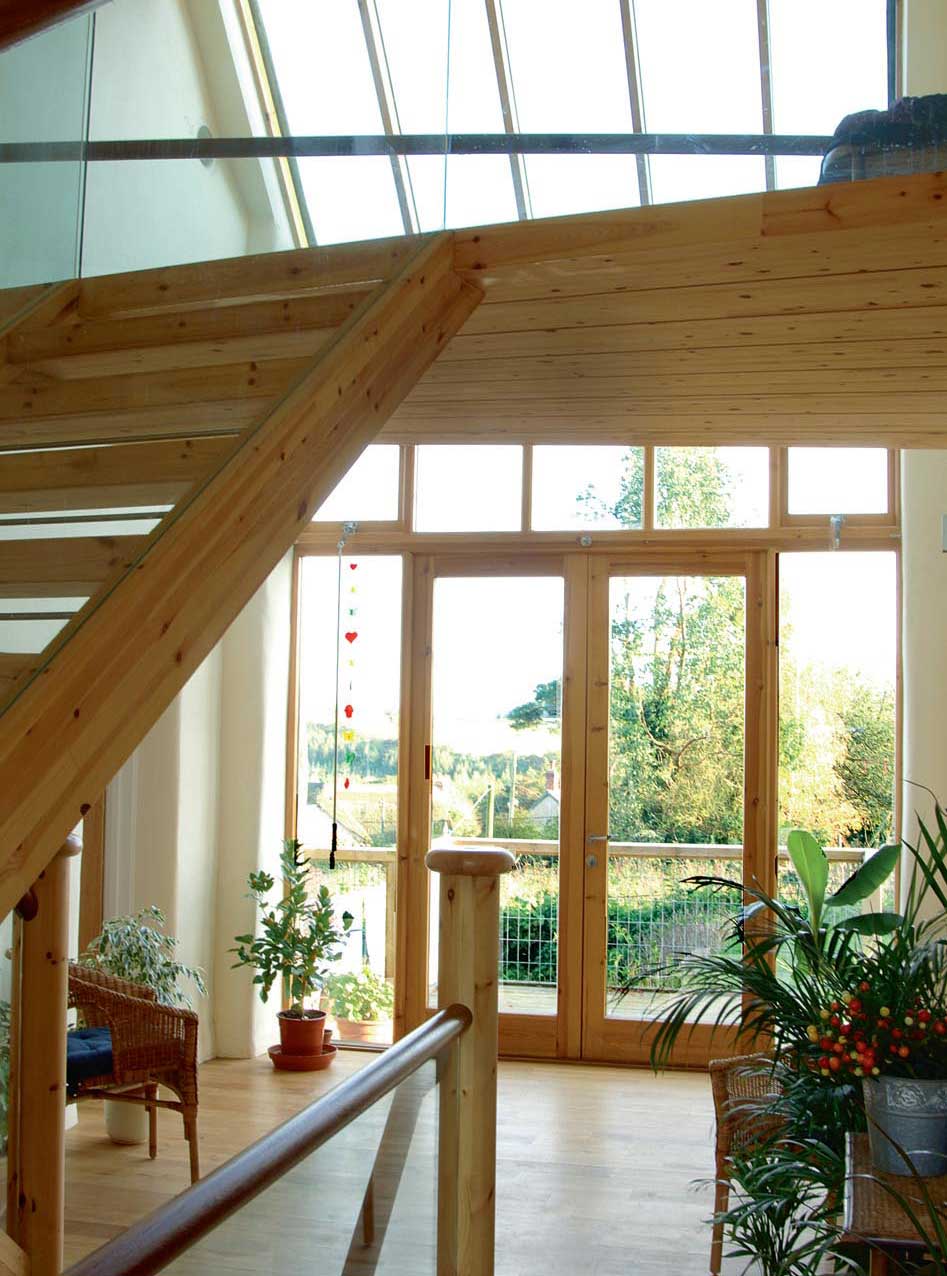 The couple encountered few problems with Building Regulations. “Once we had realised the substructure would have to be of concrete, we found that by packing the lower blockwork sections of the walls with insulation and by making the cob 650mm thick, we could conform with the thermal insulation regulations,” recalls Jerry. “Building Control was very supportive and prepared to accept the research from Plymouth University on the U-value of cob, while being fully conversant with the structural qualities of the materials.”

Once the basement structure was in place, Jerry and Jan used timber shuttering to hold the cob mix in position. This avoided the lengthy process of paring the material back once it dries. Cob walls are built in ‘lifts’, the cob being lifted into position – in this case with a swing shovel machine – in 5m x 800mm sections at a time. They worked all round the walls and by the time they got round to the beginning again it was possible to add another ‘lift’. “The system worked very well,” Jerry recalls. “However, it still took a long time because the house has a large number of openings, and getting the windows correctly splayed and the lintels accurately positioned was a tricky process.”

Architect Barry Jobson, of Dartington-based Bedford & Jobson, came up with the idea of an atrium at the south-facing rear of the house, a feature designed to encourage maximum solar input. The energy could then be stored for slow release in the thermal mass of the cob. He also orientated the house so that the solar water heating panels in the roof and full-height ‘glass wall’, with its glazed doors out to the raised decking, make the most of the stunning views across the Torridge Valley.

For the colour of the external lime-based roughcast, Jerry and Jan took their cue from the sand which they obtained from a quarry near Crediton. Internally they coloured the walls using limewashes from their own company range and this has worked particularly successfully in the sitting room, which they have kept deliberately traditional in style, with the low ceiling supported by an oak beam and a log burner in its large fireplace. The light comes in at odd angles through the deeply splayed windows and creates a lively play as it hits the softly limewashed ceiling and slightly uneven soft lime plaster on the walls.

“Cob walls are forgiving, gentle and soft – you feel as though you are living on the inside of a big tea cosy,” smiles Jan. “We like to think we have created a combination of sustainable local materials, plus factors that give the house a good thermal performance. In addition to all the insulation in the basement walls, there is a mass of pumped recycled newspaper insulation in the roof.”

Jan’s great pride and joy is the earth floor in the kitchen. “I saw lots of earth floors when we did some work in Mexico,” she recalls. “Tiles are hard, and we have oak floors elsewhere in the house, but compacted earth is cheap, eco-friendly and very hard-wearing. When you add linseed oil, as we did, you get the appearance of well-used leather. It took a long time to construct it, and drying out took an age, but it’s so beautiful.”

The final tour de force is the glass-sided staircase, constructed on site by carpenter Phil Scaniszlo. This is surmounted by a striking angled bridge, also built by Phil. “We love it, and so too do our two children, Rachel, 20, and Louis, 17,” says Jan. 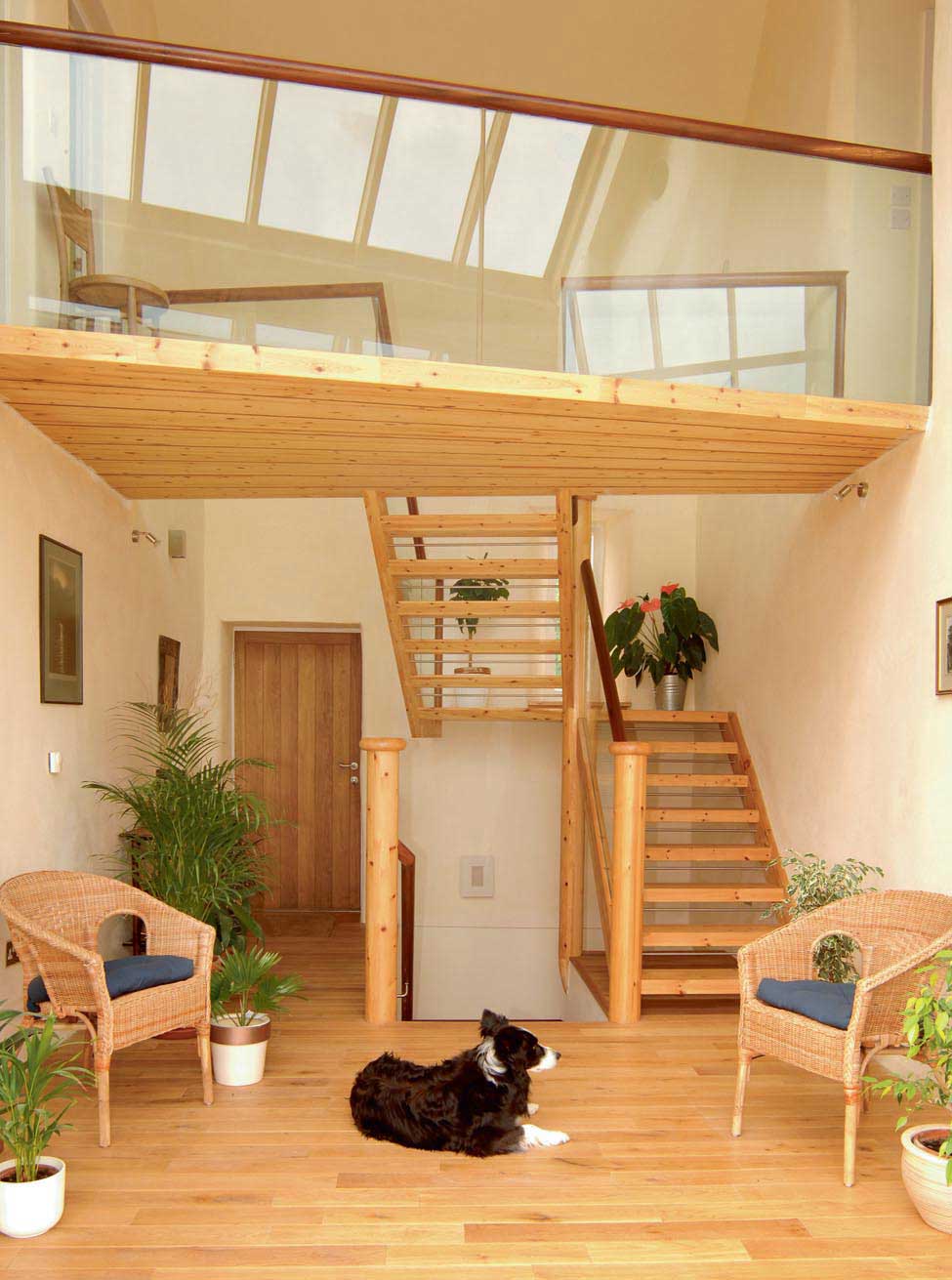 “With blockwork the build could undoubtedly have been completed in under a year, and it would probably have been a lot cheaper on labour,” says Jerry. “But we wanted to show that it is possible to build a contemporary style house in cob. Now it is finished it has proved hugely satisfying and we have no regrets.

“We were extremely fortunate with Clinton Devon Estates. Not only did they allow us to live very economically in a rental when our previous house was sold, but they also held the £35,000 price tag on the land for several years. As we were on a very tight budget throughout the whole project, and very squeezed for funds towards the end, it was their constant cooperation which made the whole project viable.”

Lime is the perfect material for plastering and rendering cob houses, and has been the select material for both these purposes, and also for use as a mortar, since mediaeval times; many traditionalists still prefer it today, both for its eco credentials over cement and the long-held belief that it looks better in traditional settings. When plastering or rendering a cob wall with lime, there are generally two to three thin different coats applied (thick coats will crack), which are built up in layers. This is followed by a limewash which serves to protect the wall and offer aesthetic value; this may be coloured with natural pigments. Lime rendering and plastering can be a messy job, and the cob wall must first be dampened before the lime is applied so that there is a good suction bond between the lime and the earth. Mixing lime with sand offers a smooth, creamy top coat and reduces the potential for any shrinkage or cracking. Fibres are added to the mix for extra strength and to allow for any movement in the cob. Often they are left off the final coat to allow for a smoother finish.