Solar energy has been harnessed by humans since pre-history, using a range of ever-evolving technologies. Some 1,400W of solar energy falls on each square metre of the earth’s surface (about 1,100W in UK), but only a minuscule fraction of that energy is used. There is 10,000 times as much energy available from the sun as the world needs; more solar energy reaches the earth in an hour than the earth consumes in a year. All of which is true, interesting and not very useful. But it does tend to counter the idea that we don’t get enough sunshine in the UK to make solar energy viable.

Solar technologies are either passive or active, depending on the way they capture and convert sunlight. All we really need to know is that: firstly, the UK gets enough solar energy; second, it is entirely possible, and practical, to run a house entirely on solar energy; and last, the technology is there and ready to use.

Passive solar energy is closely related to architecture and was well understood in the ancient world. Greeks, Romans and North Africans built houses (and still do) that use the sun for warmth and light but that don’t suffer from overheating.

Passive solar energy involves orienting a building to the sun, selecting materials with good thermal mass, designing spaces that naturally circulate air and organising the room layout to utilise solar heat and light through the day. It is not easy and not something all architects are comfortable with, but once it is done it provides a house that is better to live in, low running on cost, low maintenance and pays back for the whole life of the building. So what are the options?

Solar thermal systems produce hot water, and both types – flat plate or evacuated tube – work on the same principle of light passing through glass being refracted and generating heat. It does not make much difference which system you choose. On a like-for-like basis the cost per kWh produced is similar.

As with all good things the technology moves on and there are now flat plate systems that look quite good (they do not need to be south facing either). In an efficient house and used in conjunction with a good-quality cylinder and underfloor heating system, solar thermal systems can contribute to space heating as well as domestic hot water.

A typical domestic solar hot water system – be it a 4m² flat plate or 24 evacuated tubes – will deliver up to 2,000kWh and save about 0.4 tonnes of CO2 per year. Capital cost will be £4,500 to £5,500 (including a cylinder) depending on technology and installation. The domestic Renewable Heat Incentive (RHI) for solar is currently thought to be 18p per kWh (yet to be confirmed). 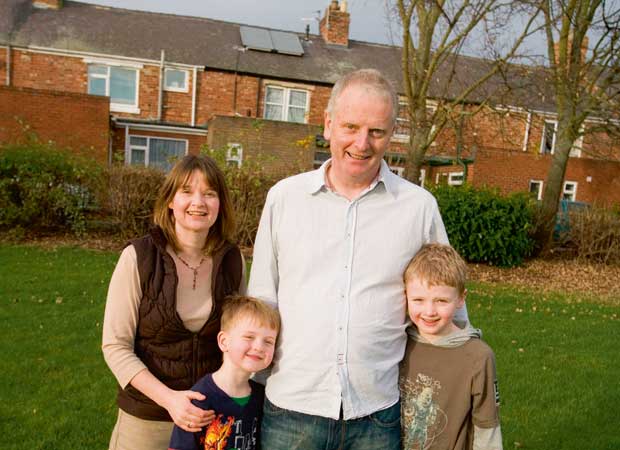 Alison and Andy Tombs live in a terraced house in the Newcastle area with their two children. The family were previously reliant on a very large, unwieldy and inefficient gas-fired back boiler which took up a lot of space — it was about 20 years old too. Their fuel bills at the time were around £70 per month.

Whilst undertaking some work on their home anyway, they decided to look into renewable options for heating, and specified Worcester’s Greenskies solar water heating system which was installed in September 2007.

The installation took about two weeks to complete with the old boiler removed and the new Worcester Greenstar 18Ri system boiler installed, along with the new panels.

The majority of the home’s hot water is now supplied by the system and, during winter months, the new boiler kicks in to ensure a steady supply. The boiler is dormant during summer.

Alison says: “We are delighted with the results. There is a panel on the tank which tells us the water temperature — we know that if it’s over 43?C, we have enough for a bath as well as the washing up.

“Now we’re in winter, we are finding that the solar panels are heating the tank to between 20-30?C so we turn the boiler on for 30 minutes to an hour each day to top that up.”

Alison and Andy installed a Worcester Greenskies solar system (panels, cylinder and a new system boiler) at a cost of around £7,000 fitted.

Solar PV generates electricity. A PV cell allows light to pass through a silicon crystal which gives atomic particles an electronic charge, lines them up positive to negative and allows the resulting energy to be harvested. If you feel you need to know more on how they work read Richard J Komp’s excellent Practical Photovoltaics (£12, Amazon).

A typical domestic PV installation will be close to 4kW capacity. It will cost around £8,000 depending almost solely on the supplier, and will produce about 3,200kWh per year, some 40% of which will be usable in the house. Currently Feed-in Tariffs (FiTs) return is 14.9p per kWh and 3.2p export tariff, due to drop to 13.4p on 1st April 2013 — still making it a viable investment.

Karl and Jane Godden have been living in Norwich with their 3kW PV system since June 2010. Supplied by Anglian, who they used on account of a previously good experience buying windows, the system cost around £12,000 to install and generated £1,400 of income under the FiTs scheme in its first full year (the Goddens signed up at a lucrative early stage of the scheme). “What’s more, we’re saving 20-30% on our electricity bills,” explains Karl. “We’ve introduced little lifestyle changes, such as using the dishwasher during the day rather than overnight, to get more benefit from the amount of electricity the panels produce.”

Photovoltaic thermal (PVT) systems produce electricity and heat at the same time. PVT panels look like PV panels but have a thermal collector on the back which uses a fluid cooling system to regulate the panel temperature and maintain a constant 25?C. This allows a higher electrical yield compared to the equivalent area of PV and a significant amount of free heat — up to three times as much heat energy as electrical energy.

The system can be connected to a heat pump to meet the whole space heating and hot water demand. The technology qualifies for both FiTs and RHI and when the returns are factored in, can achieve a true zero- running cost. 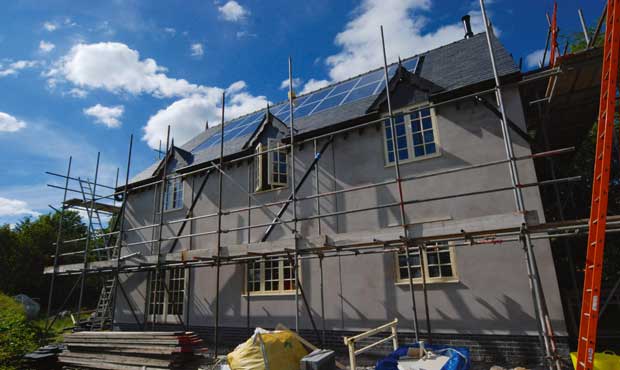 Martin Aymes explains how his PVT installation is performing a few months in:

“The 16-panel system has been in use fully since I moved into my self build in Wales last September. To date (8 February 2013) the system has produced 2,874kW of electricity (since 3 March 2012), part of which I have used in lieu of importing from the Grid, the remainder earning me £1,400 through the FiTs scheme. A heat pump was installed as a back up but the system is designed to prioritise the free thermal energy the panels produce.

“I’ve not measured the heat side of the production so far but my 170m2 house has been kept at a constant temperature of 18?C since September with the only addition of heat being a small 3kW woodburner in my study when the temperature outside has got as low as -4?C during the winter.

“My electricity costs are some £800 for the year therefore showing a net tax-free income for the year of probably in excess of £700. Some may consider my electricity costs to be a bit high but it’s the only energy I buy apart from a bit of wood (I was previously spending about £2,000 a year for my energy). I am still getting used to the system and to getting the best from it — e.g. it’s wise to do the washing when the sun is shining, shower/bathe in the morning to allow the day to heat the water up again and other similar adjustments to my lifestyle.”

Thermodynamic solar combines a particular type of solar panel with a heat pump. This technology uses a refrigerant gas in metal (generally aluminium) panels. The gas is at –25?C so the panel is capable of collecting heat all year. It also means that the panels do not have to be south facing or even on a roof. The panels collect heat from the ambient air which is then extracted by a heat pump. This makes the heat pump extremely efficient with a coefficient of performance reaching over 5.0 and means that the system can meet the entire heating and hot water demand.

The problem with this system was that as the refrigerant is at -25?C in cold, wet weather, it tended to turn rain into an ice coating. Thermal Reflections have cured this with their Hyrax system which uses hot gas technology to prevent unwanted ice build-up.

How to Make a Decision

Passive solar energy affects virtually every house. Using it effectively is a matter of consciously designing it rather than just letting it happen.

Similarly, including active solar energy should be a given in any new-build design. The decision on which technology to employ will vary with the design, the scale, the glazing, the levels of insulation and the airtightness. All these affect the amount of energy needed, which then influences the decision. Or, start at the other end by making the decision to be a solar-powered house and designing the building appropriately.

The way to choose a good system – either solar thermal or PV – is to choose branded products and a good supplier. The product quality does not vary much between branded manufacturers but the quality of supplier does.