Repointing brickwork might not seem like the most glamorous of jobs but it is one of those essential maintenance jobs required for your home to perform well.

Whether your house is constructed from brick or stone, mortar can make up as much as 15% of its overall surface area — so it isn’t hard to see what a huge impact repointing brickwork can have not only on the stability and performance of your home, but also on its final appearance.

The wrong mortar mix, inappropriate materials, a poor colour choice, or a bad application – will spoil even the best brickwork. This is huge shame as, when done well, repointing brickwork is a job that can really enhance a home, despite its seeming insignificance.

If you are still not convinced that you need to repoint then bear in mind that mortar is a primary defence against water ingress and as such is a critical aspect of a home maintenance schedule.

Repointing brickwork should be high on the priority list when taking on a renovation project. Missing or damaged mortar is a common source of leaks and a cause of damp in homes in need of wider renovation.

Although many renovators carry our DIY repointing, given the requirement for working at heights it can be a job that is best outsourced to a professional.

Mortar is the substance that separates individual masonry units (such as bricks or stone blocks) from one another. It protects the building from water ingress and is also used to fill any irregularities on the bedding faces of the bricks or blocks (the bedding is the mortar used to bind the bricks to one another.)

Mortar can be made up of a variety of different materials. It is softer than bricks and stone so at some point in the life of a building, it will start to deteriorate— and this is the way things are supposed to happen.

If the mortar was harder than the bricks, the bricks themselves would take the brunt of weathering, causing them to erode and fail — and replacing brickwork is far more expensive and disruptive than repointing brickwork.

Put simply, repointing brickwork is renewing the outer portion of the mortar joint, and a good repointing job on your home should last up to 50 or 60 years.

What will brickwork repointing cost?

If you can easily see open joints around the mortar bed, then it is time to think about repointing.

Repointing is a straightforward job and the materials required are not expensive — but the cost of the labour involved in brickwork repointing can be quite high.

It can also be hard to find a builder willing to take on small repointing jobs, which is why many people choose to carry out repointing on a DIY basis. Don’t forget though that DIY repointing will usually require scaffolding hire.

According to priceyourjob.co.uk, you should budget around £20-£30/m² for brickwork repointing, with their estimate for a three bedroom semi-detached house coming in at around £3,000 once scaffold hire, materials and labour are factored in.

Which mortar is best for repointing?

A large range of textures and colours can be achieved when mixing mortar. Most houses built up to and including the Victorian era used lime mortar and if your home falls into this category then this is most certainly the mix you should use.

The use of cement in repointing mixes does tend to be a bad thing in old houses (although it is still frequently done) causing decay to occur earlier than with lime mixes and damp more likely to raise its head. Cement mortars are harder, more brittle and less porous than lime and will weather slower than the bricks themselves.

Mortars containing cement tend to be more susceptible to salt and sulphate attack, while mortars containing only lime (putty or hydraulic) and sand are not vulnerable to this kind of damage.

Lime mortars are more expensive than cement — but in the long run they can actually save money as putting right problems caused by inappropriate cement mixes can be costly. 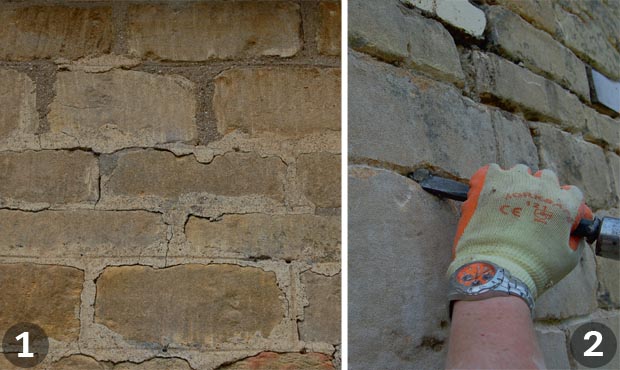 1. Repointing brickwork is clearly high priority on this wall. Not only is there a mixture of materials, but the profile of the pointing ranges from semi-recessed to plastered-on-top — not good. As with many renovation projects, plants have been growing up against the walls — these should be pinned back and then tethered into place before any work can start on the building. Repointing brickwork is a messy job so plastic sheets should be laid over flower beds, new paving and areas of grass.

2. The old pointing is removed with a hammer and chisel, with particular care taken near the areas shown in the following four steps. Disturbing old mortar around windows can affect the way they fit (and open). The chisel is used on its own to chip out only the loose material. 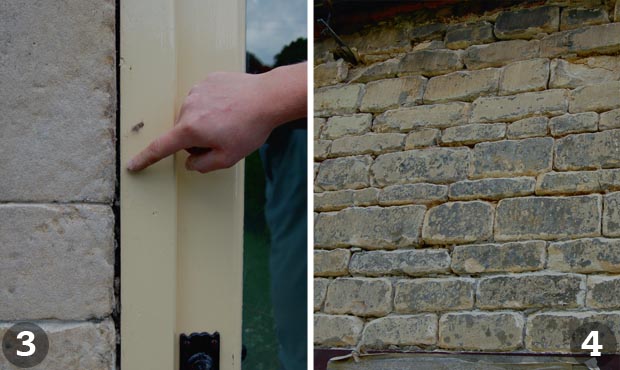 3. Take care around doorways — if mortar gets pushed into the gap between the wall and the frame it can cause the door frame to move and make the door hard to open and close. Loose mortar is raked out gently with a narrow chisel. Metal gutter brackets are prone to falling out if they are disturbed during the chopping-out phase. Power cables for external lighting is often run inside the pointing so take care. It was easy to spot on this job because the joint was a different colour in the course leading up to the lamp.

4. This is what is left after the old mortar has been removed. The edge of the stone is revealed all round and there is now a gap wide enough to take (and hold) the fresh mortar which will soon be applied to the wall. 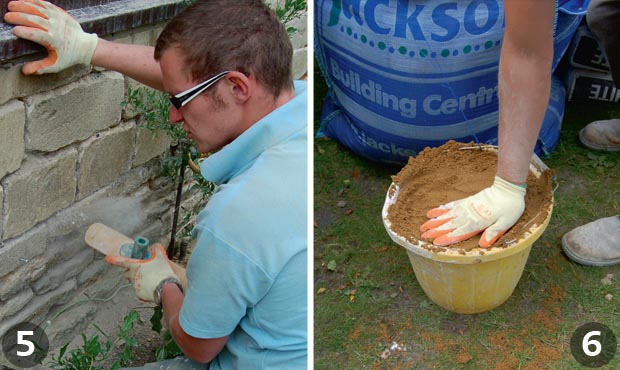 5. Plenty of dust is left in the gaps between stones afterwards. This is brushed out before repointing begins. 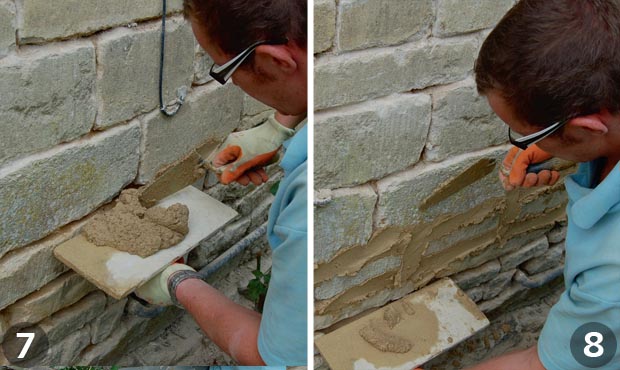 7. Repointing is generally done from the top of the wall downwards. However, the first half metre of a solid wall without a damp-proof course (as here) holds a lot of moisture so this section is done first — giving it more time to dry. The mortar is pushed in firmly, working from right to left.

8. Once two or three courses have been repointed, the vertical joins between are filled too. Notice that the mortar is allowed to overlap all the joints and no attempt is made at this point to neaten it up. With the bottom half metre of the wall complete, the top section is started. Within five hours, a team of two complete this stage on this 24m2 wall. The mortar is left until nearly dry. How long the drying process takes depends on the weather and the position of the house in relation to the sun. In this case, the mortar is ready in just a couple of hours. 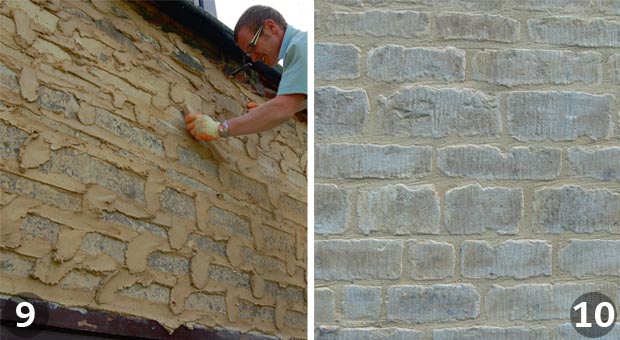 9. A wire brush is used to take off the excess mortar and leave a face joint that is only just recessed from the face of the wall. In other areas of the country, a deeper joint or one that is flush with the wall may be more appropriate. The wire brush also cleans up the stonework as it moves over the surface.

10. A close-up of the finished job. With the face joints now clearly defining the stones, the wall not only looks great, it is ready to withstand years of weathering.