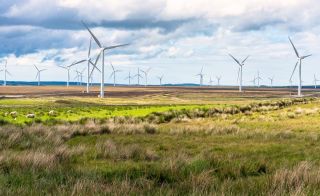 Wind power will be used to produce enough electricity for every home in the UK by 2030, Prime Minister Boris Johnson has announced as part of the government’s Build Back Greener drive.

Mr Johnson unveiled the Build Back Greener plan, tentatively scheduled for publication for November, at the virtual Conservative party conference on Tuesday.

The announcement of the plan, designed to spearhead the UK's green recovery, follows the launch of the Green Homes Grant, which enables homeowners to apply for energy-efficient home improvements up to £5,000, last week.

Downing Street says the pledge to support offshore wind farms is the first in a 10-point plan to drive innovation to improve homes’ energy efficiency, and to help the UK meet its target of reaching net zero carbon emissions by 2050.

Mr Johnson said that he wants the UK to become the world leader in low-cost power generation, with offshore wind powering every home in the country in ten years’ time.

The UK’s offshore wind capacity currently provides 10% of electricity demand - the largest in the world - and the government will allocate £160m to upgrade ports and infrastructure, and to develop new technologies in the North Sea to build new wind farms where the winds are strongest.

Mr Johnson said: “Your kettle, your washing machine, your cooker, your heating, your plug-in electric vehicle – the whole lot of them will get their juice cleanly and without guilt from the breezes that blow around these islands.”

Response to the Wind Power Announcement

This announcement follows pressure from some campaigners that the government did not set out green measures to help the UK meet its target of reaching net zero carbon emissions by 2020 in its Covid-19 recovery plan.

But the move has been welcomed by Caterina Brandmayr, head of climate at the Green Alliance think tank. She said: “A green recovery is the best way to create jobs in every part of the UK, to lead the world in tackling climate change, and to protect our precious natural world.

“The race is now on for the government and British businesses to replicate the success story of offshore wind in electric vehicles, smart grid technology and future-proofed homes.”

Additional Measures in the Build Back Greener Plan

Other measures expected to be part of the plan include financial support for the UK’s clean hydrogen industry, to help cut carbon emissions from homes - a particularly exciting move in light of the advancements being made with hydrogen boilers.

Additionally, it is expected that there will be a focus on retrofitting homes to make them more heat and energy efficient, which will likely be welcomed by campaigners who have long called for the government to cut VAT on retrofits.

Mr Johnson did not elaborate upon these measures in his speech, but said: “Imagine a future – with high-skilled, green-collar jobs in wind, in solar, in nuclear, in hydrogen and in carbon capture and storage. Retrofitting homes, ground source heat pumps.”

(MORE: How to choose heat pumps)