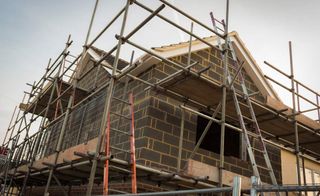 All new homes delivered through Permitted Development will now need to meet minimum space standards, the government has confirmed.

This update follows the controversial planning reforms announced this summer, including the extension of Permitted Development rights to make it easier to demolish certain vacant buildings and replace them with new homes.

The policy had drawn criticism from councillors and industry experts, who alluded to a government commissioned review of the system published in the summer, which found Permitted Development had created “worse quality residential environments than planning permission conversions in relation to a number of factors widely linked to the health, wellbeing and quality of life of future occupiers”.

While the extension of Permitted Development rights - which came into effect on 31 August - featured stipulations such as ensuring adequate natural light, it did not introduce space standards, leading to fears that developers could look to exploit this exclusion.

The new change means that all new homes in England delivered through Permitted Development will now have to meet the National Described Space Standard. This begins at 37m² of floorspace for a new one bed flat with a shower room (39m² with a bathroom).

Housing secretary Robert Jenrick said that he had decided to alter the rules in order to tackle “the minority of developers abusing the system”. However, Mr Jenrick stopped short of announcing when and how the government intends to change the relevant regulations.

Reaction to the Permitted Development Update

The response has been overwhelmingly positive. RIBA president Alan Jones said he was “delighted and relieved” at the news, adding that the government “has done the right thing by closing this dangerous loophole and ensuring new permitted development housing across England will have adequate space and light – standards that should be a given.”

Brian Berry, chief executive of the Federation of Master Builders (FMB), said the move would prevent people from being expected to live in a “rabbit hutch” home.

“The introduction of new space standards will stop the creation of homes unfit for human habitation. Everyone deserves the right to a decent home and I’m grateful that the Housing Secretary has listened to the calls from a range of organisations, including the FMB, and that a loophole for unscrupulous builders has now been closed. No one should be expected to live in a rabbit hutch home.”

While the move has been hailed as a positive step by critics of the Permitted Development system, the government continues to face opposition from all sides over the recent rights extension.

On Wednesday, Labour secured a parliamentary vote seeking to overturn the new Permitted Development regulations, but this was defeated by the government. And next up, a judicial review by campaign group Rights: Community: Action, looking to prevent the rights from becoming law, will conclude with a high court hearing on 14 October.

Poor location and lack of external space are other key issues. Julia Park, head of housing research at architect Levitt Bernstein, said: “Space and daylight are a good start but not enough – people also need access to open space (preferably including private balconies), better soundproofing and ventilation. And some of these buildings will be in locations that simply aren’t suitable for housing."

Self Build to Maximise Space

The size of homes delivered by developers has come under the spotlight in recent years, and many have chosen to self build so they can maximise space.

If you think that self build could help you attain your dream home, consider this: the average self build is 247m², more than double the size of a new developer home*.

Getting room and overall house sizes perfectly suited to you is a vital part of the overall design process, and building a house yourself means you aren’t restricted to developer sizes.

(MORE: How to get room sizes right)

Moreover, the benefits of building your own home include choosing a specific location and specifying the design and build style of the house.

*Taken from the Homebuilding & Renovating Self & Custom Build Market Report 2017.