When the owners of a 1960s Essex house decided to renovate their kitchen, including the entire heating and hot water system, they chose a 680KCD C/F central heating range cooker from Rayburn as the centrepiece. The condensing oil-fired unit replaced an ageing and inefficient boiler that provided heating to 10 radiators and supplied hot water to an open vented hot water cylinder.

It was decided that while introducing the new Rayburn, it would be an advantage to upgrade to an unvented system, complete with new thermostatic controls and a 250l unvented cylinder. Due to the location of the old boiler, a model with a conventional flue was required. 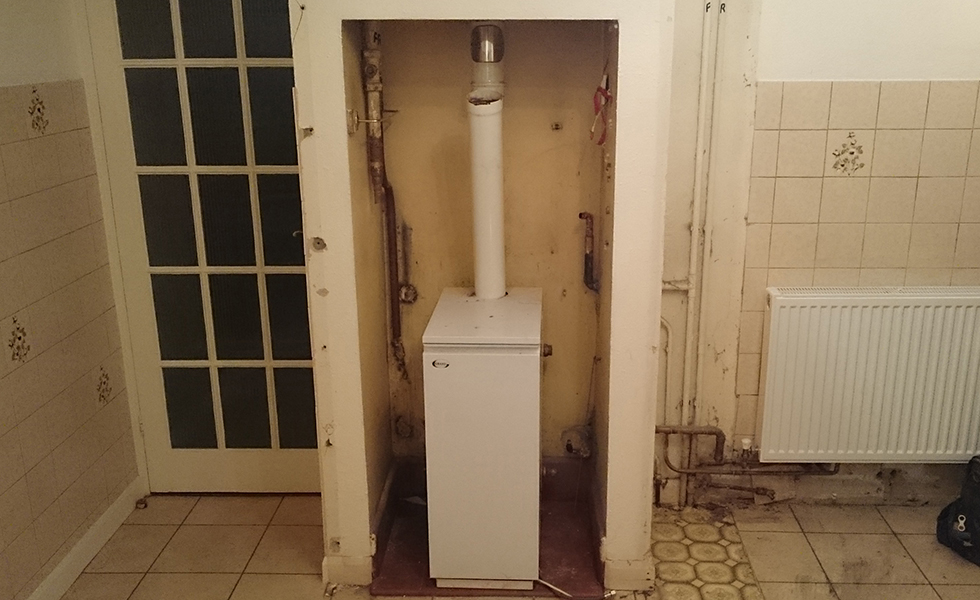 The installation was carried out by Essex-based Rayburn Guild members Advanced Mechanical. Here is a step by step of how the installation was completed, demonstrating how the new Rayburn transformed the kitchen and helped improve the property’s overall efficiency.

The area where the Rayburn would stand required careful preparation. This included tiling the splash back, while ensuring the lowest run of tiles fell below the top of the Rayburn to avoid any gaps. In addition, a shallow stone plinth was constructed in order to allow the homeowners to move the Rayburn for any maintenance, without damaging the flooring. 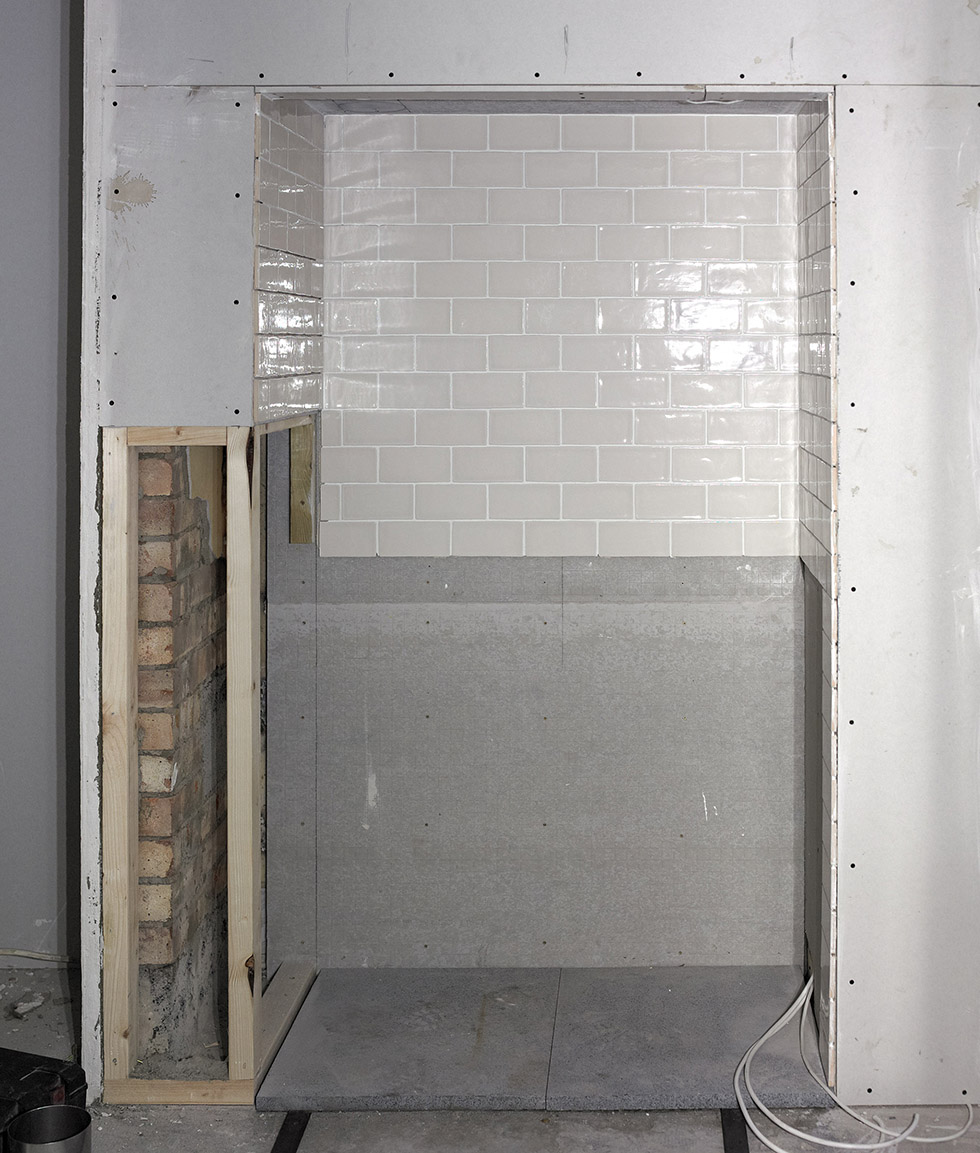 The Rayburn was carefully moved into position, having been rolled through the property on steel rollers. It was then carefully edged into place until it was flush with the pillars. 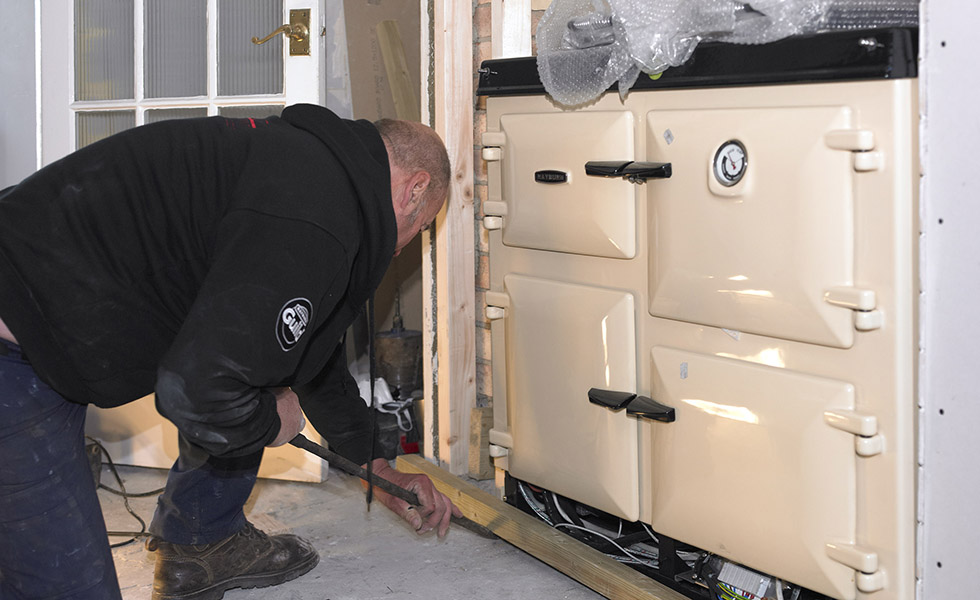 Careful adjustment was made to ensure that the Rayburn was positioned correctly and perfectly level. Slight adjustments to the height were made with the help of small plastic inserts placed under the cooker. 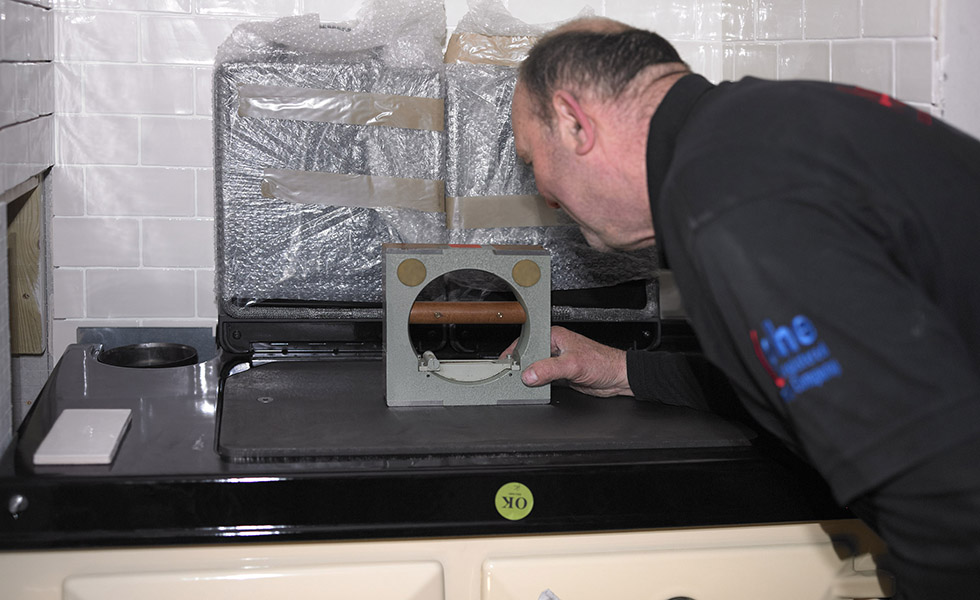 A circular hole was cut out of the register plate to allow connection of the 125mm conventional flue. 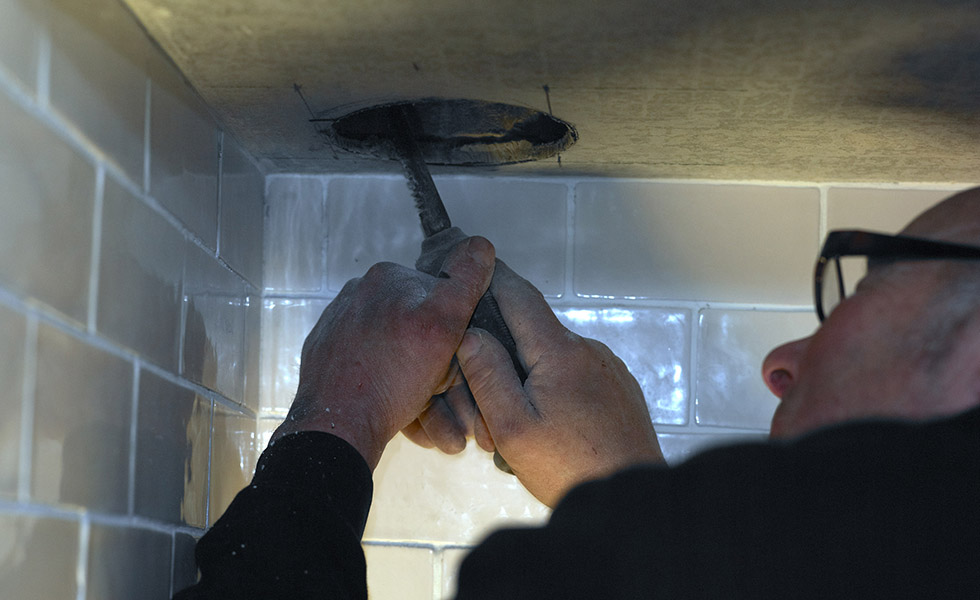 The stainless steel twin wall insulated chimney system was fed down the chimney and through the register plate. This was later connected to a matt black flue liner that was supplied with the Rayburn. 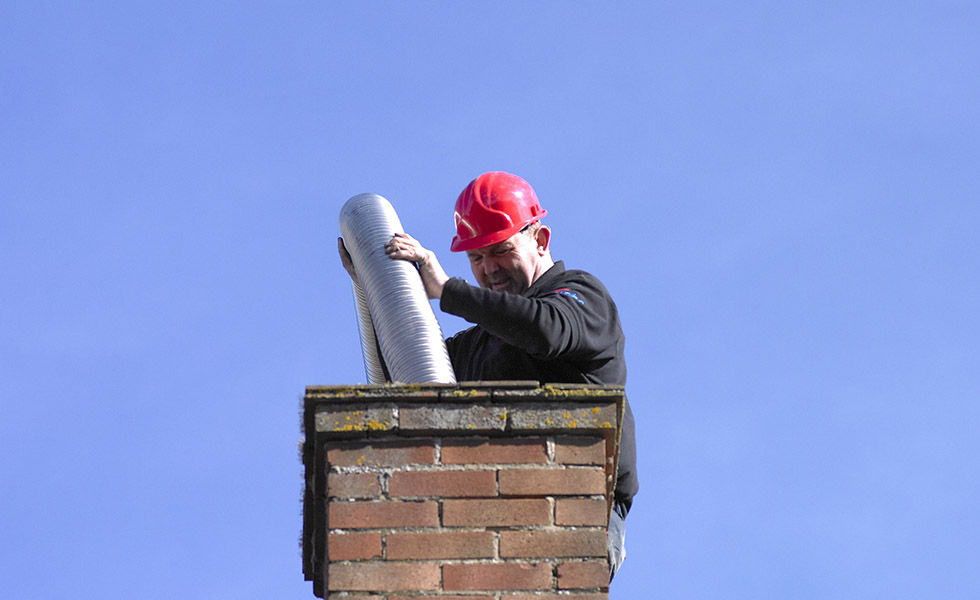 The chimney flue system was finished with a cowl to prevent birds, debris and water ingress damaging the flue. 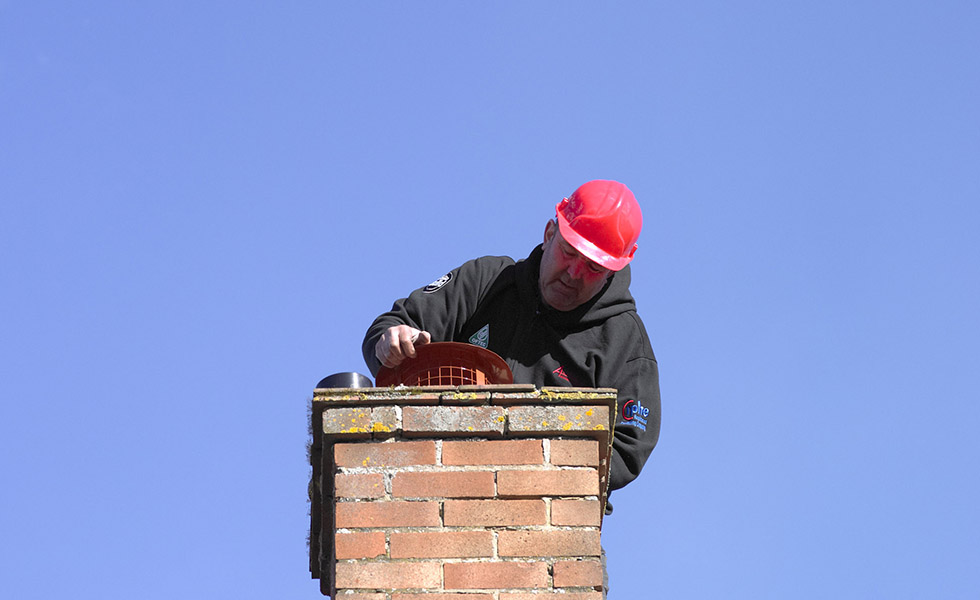 The flow and return pipework for the central heating and domestic hot water system was connected to the Rayburn. 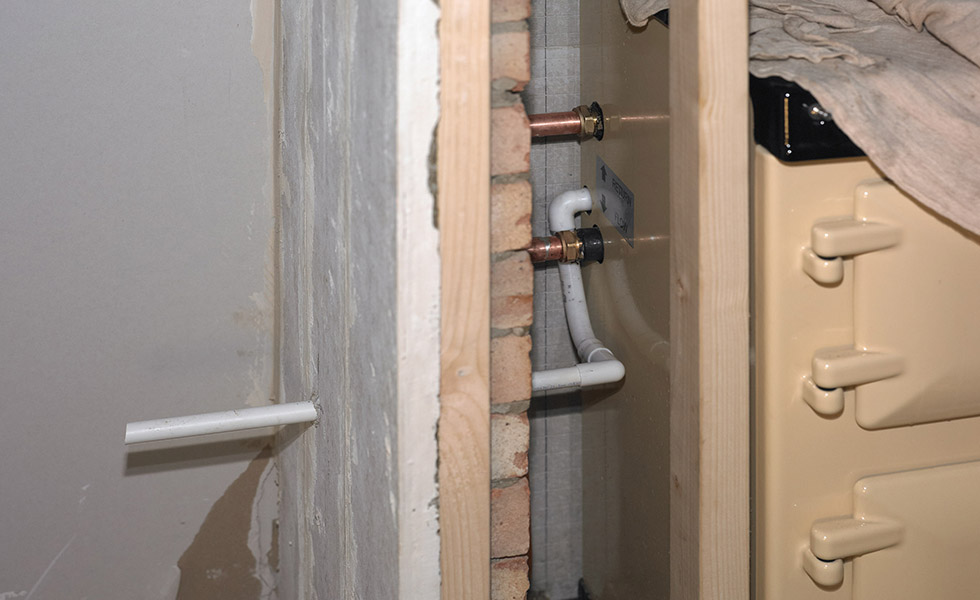 A fire valve was connected to the oil line from the storage tank to ensure safe operation and compliance with OFTEC guidelines.

In addition, the installers fitted a trap to drain condensate from the Rayburn’s boiler. 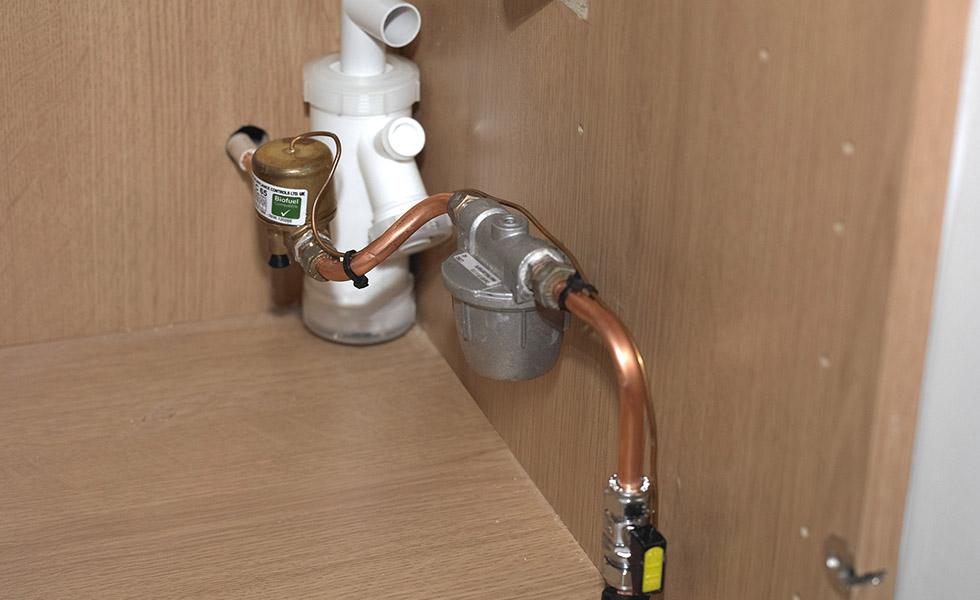 All electrical connections were made to the Rayburn, neatly concealed behind a metal plate.

The heating and hot water controls were also configured, with the homeowners choosing to install a seven-day programmer with a smart room thermostat. 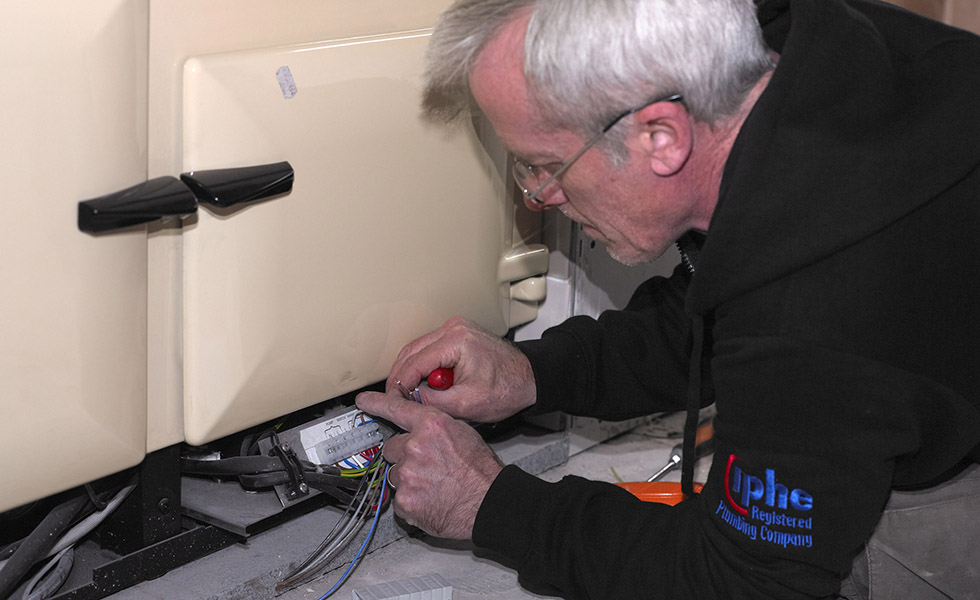 As part of the commissioning process, a flue gas analysis was carried out, ensuring the boiler was operating correctly and at optimum efficiency. 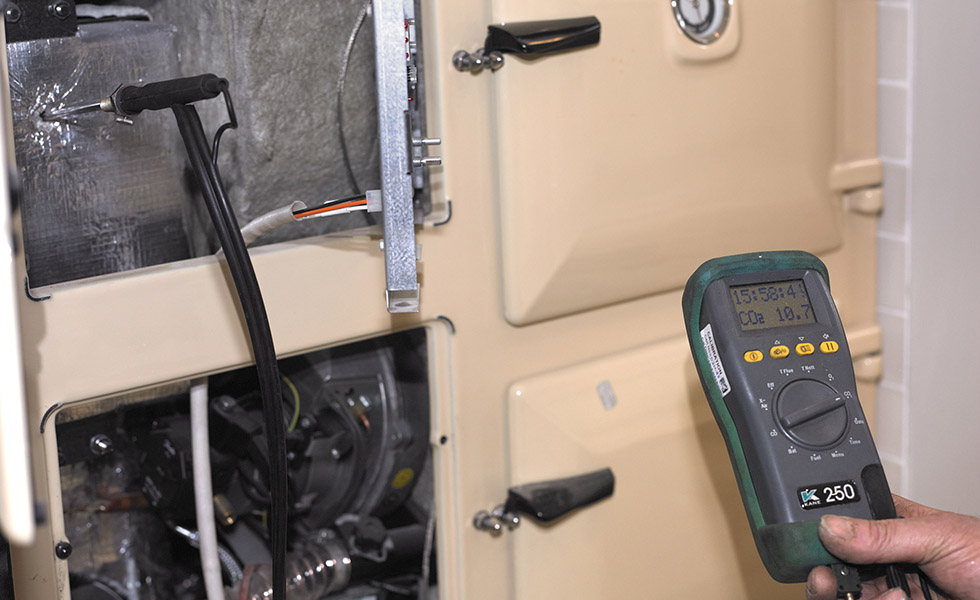 The flue gases were also tested for the cooker burner, making sure the graduated temperature hotplate and split ovens were working as designed. 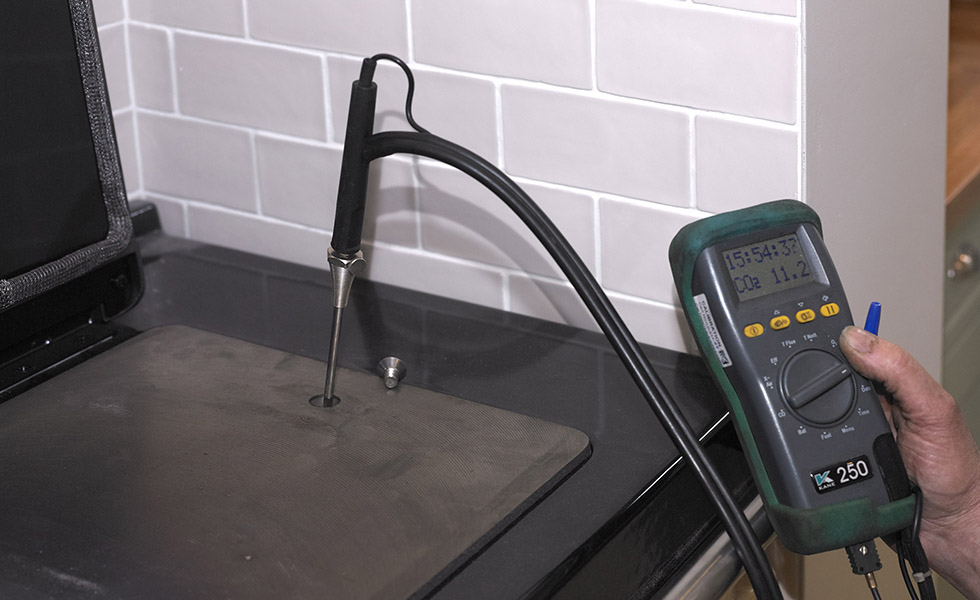 The homeowners have made the most of the Rayburn’s traditional looks, pairing it with a shaker style in-frame kitchen, with solid oak worktops. The Rayburn 680KCD C/F is now supplying efficient heating to over 15 radiators, as well as supplying hot water throughout the house.