Roof Pitch: Getting It Right | Homebuilding & Renovating Skip to content

Why is Roof Pitch Important?

With most houses the roof is the key external feature. It is even more prominent than the windows, because it can be seen from a distance. Get it wrong, whether that is down to roof pitch, design or material, and the whole project will suffer.

In some houses, the roof barely forms part of the design. This applies in so-called ‘flat’ roofed houses in contemporary style (they usually have a very shallow pitch rather than actually being flat). It also occurs in many large Georgian houses, where low pitches are concealed behind parapets.

However, with most styles of house – even the shallow-pitched villas popular in Regency and early Victorian times – the roof dominates, and must therefore look correct.

Speak to any architect that designs traditional-style houses and they will talk of roofs that are ‘satisfying’ or ‘not satisfying’. Talk to that same architect a little more and the chances are that the magic term ‘Golden Ratio’ will enter the conversation. It is a useful concept for most self-builders to be familiar with.

With a pitched roof in a traditional house – especially if it is in Arts & Crafts style or a self build that purports to be a ‘cottage’ – it is essential to have a steep pitch.

Nowadays many things militate against this. In general, the steeper the pitch, the more materials used, and so the more expensive it gets. Add a hip or two and the costs increase again. The other essential ingredient is the view of the planning officer.

Designers are often asked to reduce the pitch of a roof by planners because it is considered to have too great an impact on the adjacent buildings.

Without going into the minutiae that are drilled into all students at architectural school, the Golden Ratio (a ratio of about 1:1.62) simply acts as a benchmark against which any architect that finds a design unsatisfactory can test his intuition.

To underline this, many house designers quote Sir Edwin Lutyens — probably the most famous of British architects, revered for the quality of his country houses. Lutyens hated 45° pitches. He referred to 45° as ‘the ugly angle’.

Most traditional architects today will avoid that pitch when designing houses, and if you ask them why, a good number will say it’s because it does not conform to the Golden Ratio. A slightly steeper pitch will achieve a much more satisfying result.

“My favourite when designing an Arts & Crafts house is 51°,” says Richard Cutler (traditional house designer and Arts & Crafts specialist). More often than not he has to use 48° in order to meet the demands of planners. “However, this is far better than 45° and my style is to sweep the roof down low over the eaves and reduce the height of the outer wall in the upper storey rooms,” he says. The effect of this is to emphasise the roof.

With square-shaped houses with pitched roofs – a deep plan is considered very energy efficient these days – a lesser pitch, perhaps 42.5°, can look fine on roofs that are hipped on all four sides (pyramidal). In general this will look far better on single-storey square-shaped houses, where the roof is bigger relative to the walls.

“With cottages, defined by the small spans of the trusses that link the walls at eaves level and the dominant roofs, it is often considered best to produce a U-shaped plan form, or even an M-shape, with two ridges side by side,” Richard says. “This ensures that the roofs of the shallow- plan buildings will not become too high and therefore out of proportion.”

Thatch is used occasionally on new dwellings and demands a roof pitch of at least 45°, and more likely 50°, to allow the rain to flow off quickly and prevent ingress. This steep pitch is also an essential ingredient of cottage style. This home was thatched by Dodson Brothers

Another trick with cottage-style houses is to create a house one room deep on the ground floor and two-rooms deep on the first floor. That way you end up with a catslide — a roof with one side longer than the other, continuing at the same pitch over the two sides of the building.

Yet another technique is to add sprockets. A sprocket is an additional piece of angled timber fixed to the main rafter at eaves level in order to change the pitch.

Cambridge-based designer Stephen Mattick also likes to create interesting plans at first floor level that feature separate wings, each one room deep. “This is a means of creating a house with several different roof pitches,” says Stephen. “This can make a house look as if it has evolved over several centuries, and is a technique that often appeals to self builders in traditional style.” 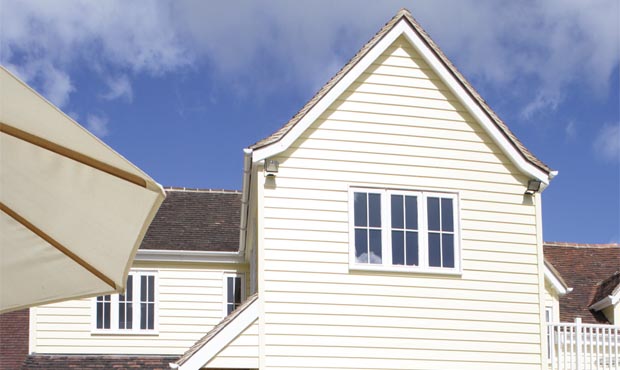 The roof on this American-style house in Sussex utilises sprockets to give a flared effect on the bottom of the eaves, changing the pitch — it’s also common on many traditional-style designs 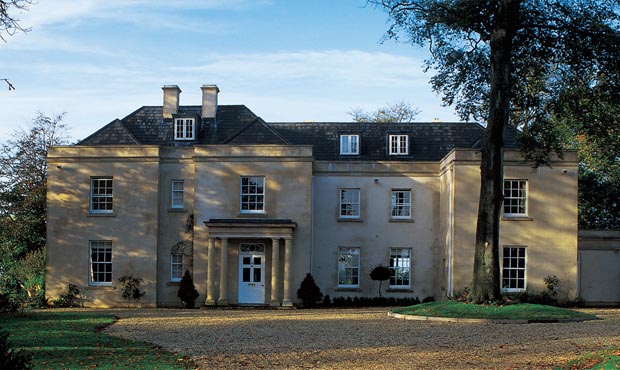 Whilst most period house styles favour roof pitches in excess of 45° because it gives the roof more dominance in the overall elevation, this Georgian home has such a short rafter length – and the roof is partially hidden behind parapets – that the effect of its steep pitch is minimised

The pitch of your roof will not just have an effect on the way the house looks. The lower the pitch, the greater the amount of water that the roof slope will collect and discharge.

As a result, the tiles must be able to cope, particularly at the lower end of the slope with the greater expected volume of water (and lower speed of water movement) without risk of leakage.10 of t

35° is considered to be the minimum for slate and clay, but if you do need to go below this, interlocking concrete tiles are the best option.

A 39° pitch is good for a Georgian style home, while a 51° pitch is perfect for an Arts & Crafts house

Deciding on the correct roof pitch for your home very much depends on the style of house you are building or renovating and, to a lesser extent, your local area.

In general terms, the more traditional the house, the steeper the pitch should be, with Victorian and Arts & Crafts designs (particularly those around the turn of the 20th century) being the steepest (at the right hand of the scale) and Georgian being the shallowest (often hidden by a parapet, and quite possibly hipped).

Much of the housing of the 20th century opted for shallower pitches to enjoy cost savings (at pitches as low as 22.5°) but the reigniting of interest in house design, coupled with the desire to make better use of roof space, has led to steeper pitches in recent years.

Up next: Great Ideas for Roof Design