It was quite some time ago now that my builder asked me for an electrical socket plan. A simple enough request you might think, but I had been dreading this for sometime.

My attentions had been diverted from such mundane considerations for sometime. I had been spending a lot of time worrying about walls, the roof and major construction materials. Practical nuances – such as where I might want electrical sockets – had been pushed to the outer planes of my self build mind. It may sound simple to decide where you would like to have sockets, however in practical terms it is not so easy and a real challenge to visualise. Two-dimensional plans help to a degree as does walking round the house shell, albeit lacking any internal walls.

In previous houses I have often thought how handy it would have been to have a socket here or there, or what a pain it is that the socket is hidden behind the wardrobe. Imagining where you might have various items and furniture you don’t yet own requires some careful thought. Electrical sockets are not the most attractive features either so I was keen not to over specify.

The combination of the hempcrete and oak frame is not the easiest house to wire. Cables are largely housed in the first floor and are either routed upwards or dropped down to the ground floor. Also wiring needed to be brought through the oak frame bays and channelled into the hempcrete. It was not difficult to chase out the hempcrete, but very dusty and messy. 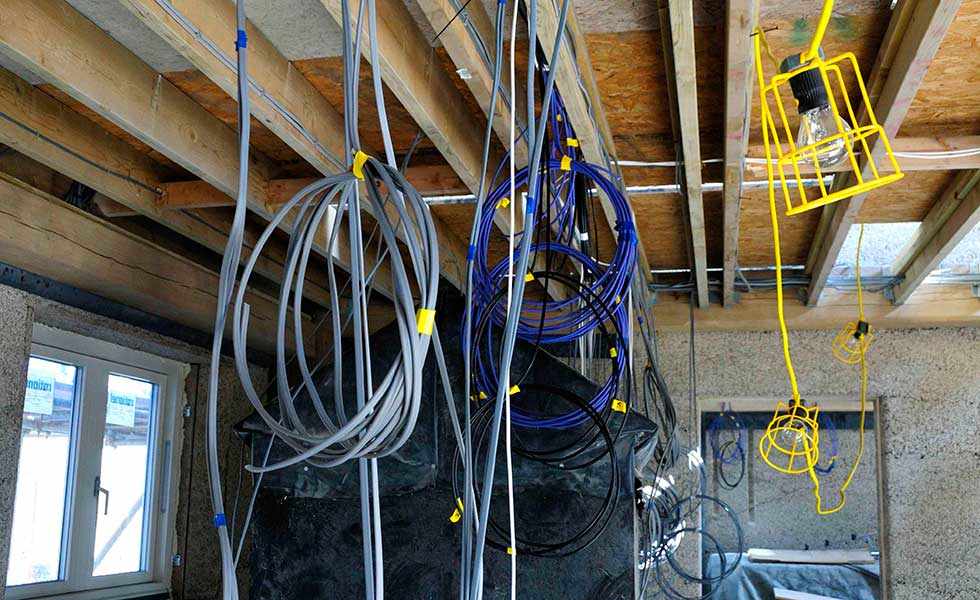 Personally I do not watch a lot of television, but it seemed sensible to put in coaxial cabling at a variety of locations should it be required at a later date. While cables could be added after completion it would not be as easy to conceal them without destructive work given the lack of cavities.

I also decided to run twin coaxial cables to key locations so a sky-recording box could be installed. Coaxial cabling comes in a variety of different qualities. The main difference is in the cables shielding that becomes more advanced with higher cost cables. I opted to install WF100 coaxial throughout as it offered an ideal blend of performance, multi-function and sensible cost.

Setting up a Network

I enjoy modern technology and wanted the house to be up to date despite its’ traditional construction. What I am not interested in is technology for technologies sake. There are times when an analogue dial or a handle is not only quicker and more effective but also far more durable in the fullness of time. This led me to much deliberation over the merits of a hardwired network or ethernet given the recent and ongoing advances of wireless technology. I concluded it would be worthwhile particularly given both the size of the house and the uncertainty of wireless performance within this type of house construction.

Much like coaxial there are different grades of network cables. I opted for Cat-6 cable as it offered good performance and was only a little more expensive than lower specified options. It can also support significant future upgrades in the speed of the incoming internet connection. I have run two data cables to most rooms and four to a few key internet areas.

A point to consider though is that given the installation environment and type it is unlikely the network will be able to perform to its maximum theoretical specifications. If this is important to you then the help of a networking specialist may be required. Despite my efforts however I suspect that in 10–15 years my home network is likely to be obsolete, but time will tell.

So the shell of the house has been filling up with cables at an alarming rate but this was only the tip of the iceberg. I have missed out one key component of the cabling — the lighting! But that is another story for another day…