How to Choose a Package Supplier | Homebuilding & Renovating Skip to content

Package suppliers, or turnkey companies, design and build companies or even occasionally custom build companies, whatever you want to call them, typically offer pretty much the same thing — a hands-off self build. The company will design the house, source all the materials, arrange the labour and get the thing done. All you have to do is pick and choose what you want, and pay for it.

It sounds all too easy, and it comes at two significant costs.

The first of which, of course, is the price itself. Price in building terms is all about risk. By transferring the risk of construction to another company, they are going to factor all the associated things that can go wrong (material prices rocketing, contractors providing poor work etc.) to the customer. People building a home through a package company would expect to pay extra to reflect this fact.

The second cost of using a package company is an addendum to the first, on risk. Because, regardless of who you use, you can’t completely eliminate risk from a building project. Companies don’t always offer the service they promised, and sometimes they go bust. This means making a choice of package company is critical — so, how do you choose?

How the Package Route Works

Plot analysis
Your package supplier might have a list of available plots; they may help you assess sites and guide you through the purchase.

Feasibility Study
A consultation session to go through your broad brief, your intentions, and budget to assess if you are able to proceed.

Design Consultation
You may work with one of the company’s designers (either in-house or freelance) to create a design to your brief and budget.

Off-site Manufacture
After committing to the project you will order your ‘kit’ frame and it will be manufactured by the supplier off site.

Groundworks
Most package suppliers do not include groundworks in their contracts, but may be able to arrange for an approved contractor to undertake the work for you.

Delivery and Erection
The ‘kit’ is delivered to site and erected, ready for you to move in. 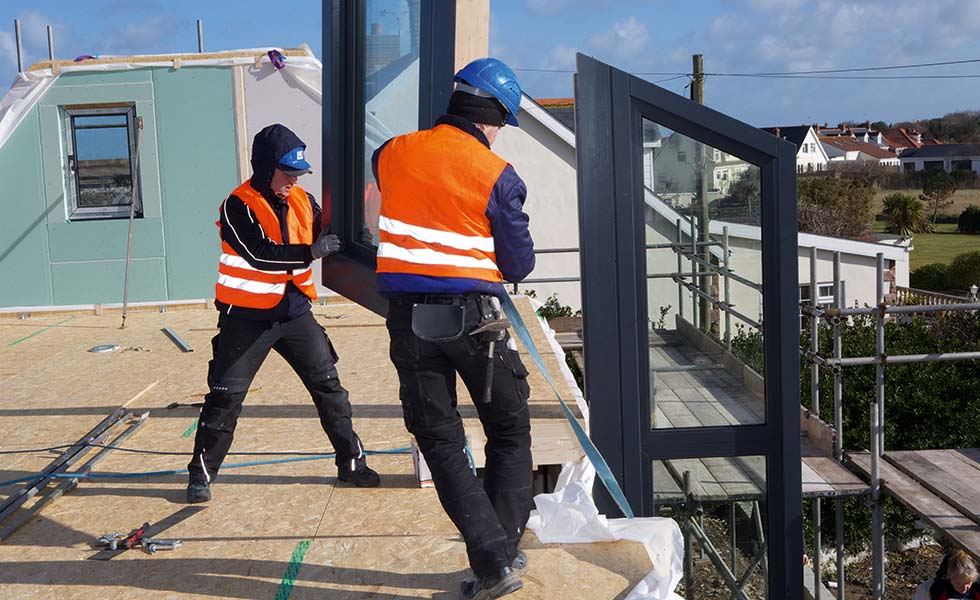 Package suppliers tend to have their own unique walling and roofing systems. The key is to make sure you’re comparing like for like

If you like the look of the highly efficient timber frame systems, package companies are the solution for you. In many ways, the package approach is essential to the delivery of highly airtight, energy-efficient wall, floor and roof systems in a way that leaving a build to a series of builders on site isn’t.

What’s interesting too is that these walling systems include parts of the build that might not otherwise have been considered part of the external wall. WeberHaus’s ÖvoNatur Therm (their most thermally efficient option) includes not only the exterior render but also the internal plasterboard.

The key is to ensure that you’re comparing like for like across suppliers when looking at U values — but also at wall thicknesses. WeberHaus’s ÖvoNatur Therm for example, allows for two skins — the regular 165mm timber frame in addition to an extra 160mm thickness of additional insulation. The total thickness including render and plasterboard is almost 400mm. 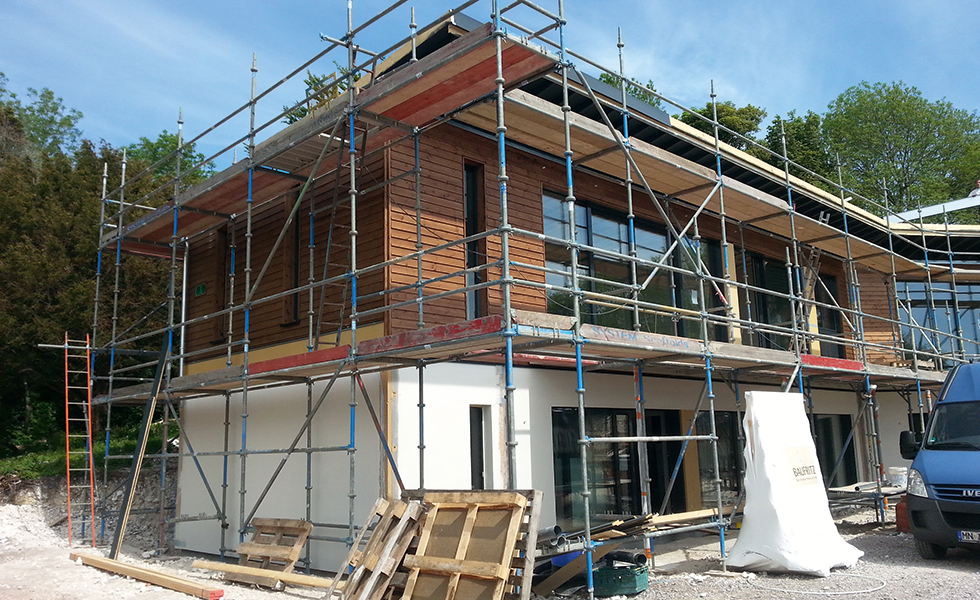 A wood-clad home from Baufritz 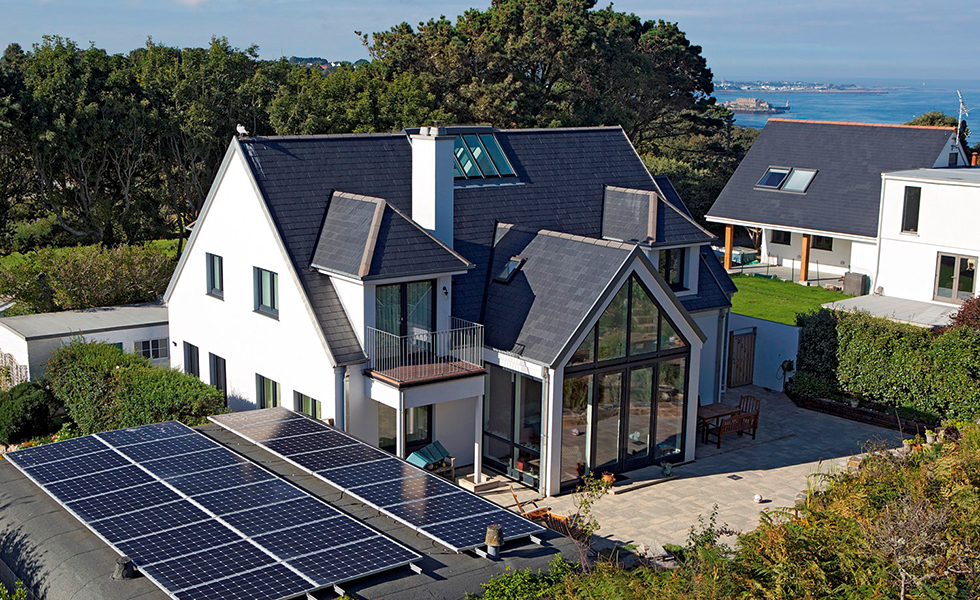 This home from Hanse Haus is finished with white render 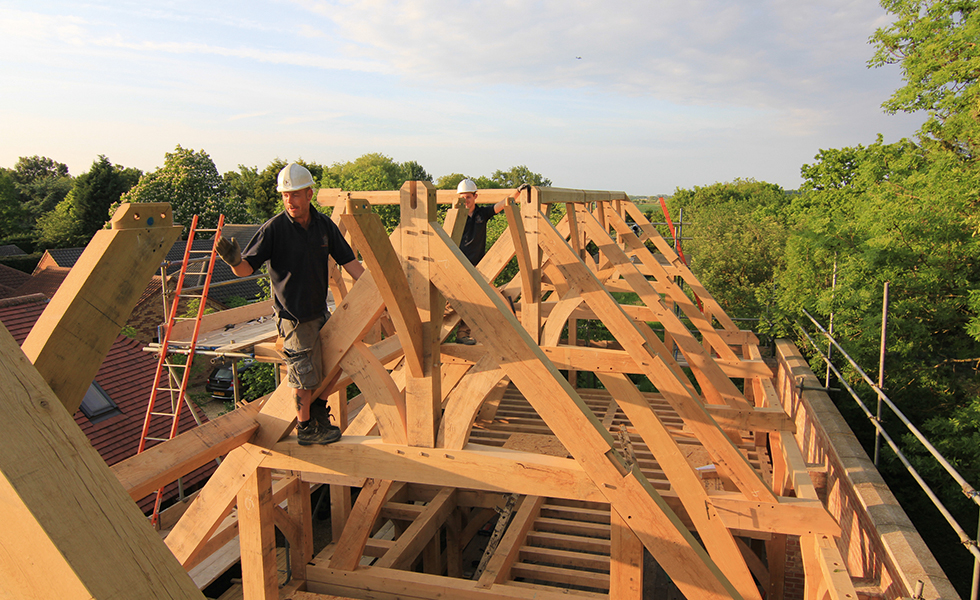 This being self build, there is a choice of walling system. Design & Materials have long stood alone in their offering of a comprehensive package service, but in blockwork, rather than timber. They have a wall system that offers U values that beat 0.17W/m2. Similarly, insulated concrete formwork (ICF) suppliers often offer a service that provides airtight and efficient wall systems.

However, if you’re making your choice of build route and package supplier on build system alone, then you’re probably missing a trick. There are distinct differences in terms of performance and construction system but they pale somewhat when compared to the fact that the end result is usually going to be well in excess of Building Regulations standards. Wall thicknesses do differ, as does the ability to achieve good airtightness levels, but the structural system shouldn’t be your main differential. 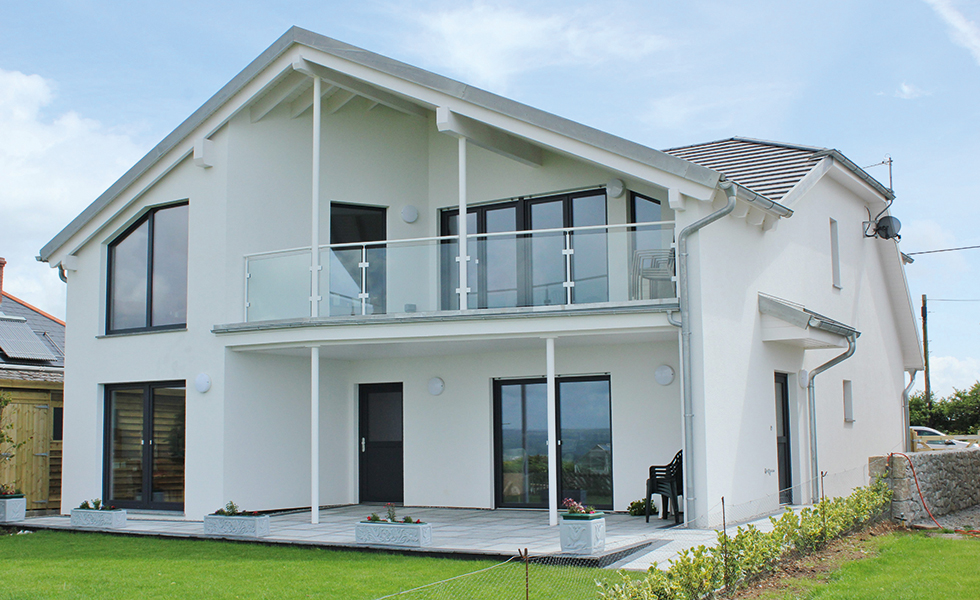 A contemporary-style home by Hanse Haus

Homebuilding & Renovating’s analysis of build costs offered by package companies reveals that the costs offered by different suppliers varies just as much as that by builders. In many ways the only truism is that you’ve got as near to a guarantee as you’re going to get that the quoted price will be the finished price you’ll pay — after all, marrying the design and build elements is a brilliant way to ensure cost certainty.

One thing to note: The European-based package suppliers tend to base their price in euros and with the recent favourable shifts between the pound and the euro, the cost of using them has decreased quite significantly.

One supplier’s ‘package’ is different to that offered by another

So-called ‘package’ companies are remarkably relaxed about the definition of what the package they provide actually is. In short, most companies offer you a range of involvement levels depending on your own preferences.

Potton, for instance, offer five main build route options to their customers after the design and planning stage — which itself includes pretty much every option you could think of, from the conventional package route of using an in-house Potton designer, to bringing your own existing plans to Potton for them to build from. In this sense Potton are effectively a materials package supplier with design and project management bolt-ons.

Although Potton will happily arrange these for you if you wish. 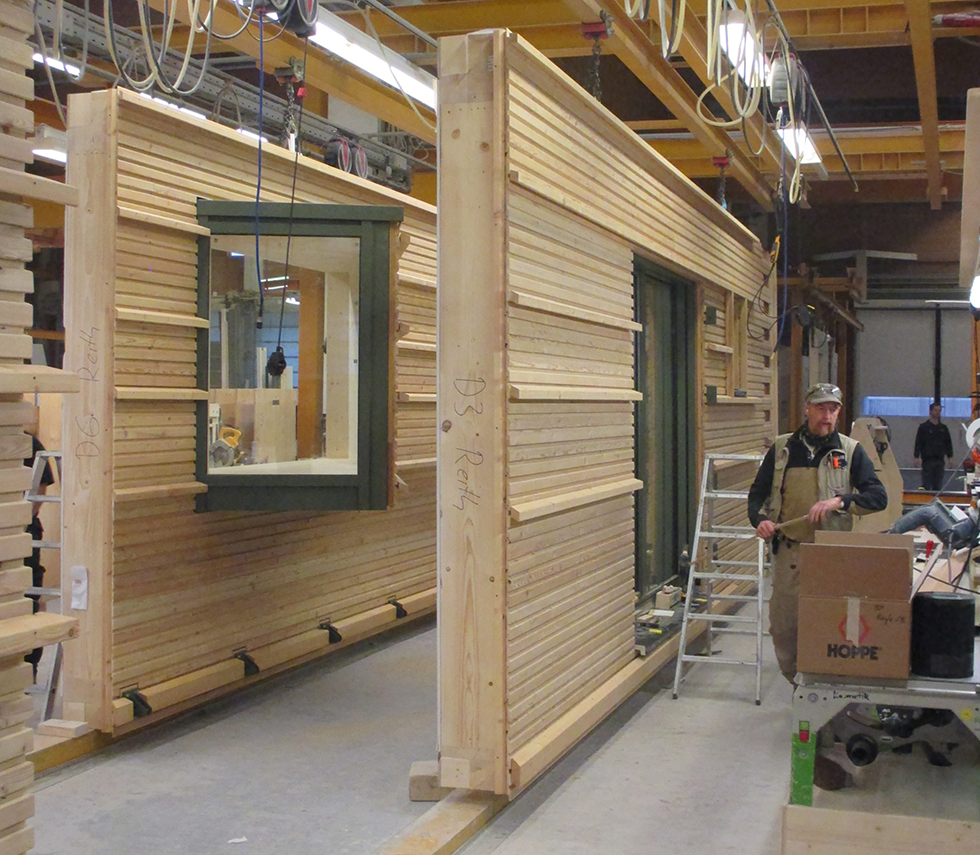 Here we see panels being constructed in a Baufritz factory. Even the windows are fitted to so that on-site construction is as quick as possible

The model offered by Scandia-Hus, one of the UK’s best-known package suppliers, confirms that for the most part, UK package suppliers tend to stop at joinery. They offer a range of transparently priced building ‘sets’ which include a design service (based on standard design types) for which the price varies depending on the build route chosen. Flexibility is great, but package building in the continental sense this isn’t.

Which is exactly the service offered by the likes of Baufritz and Hanse Haus, who offer an initial design consultation, followed by a trip to their European sampling centres to make final decisions, then everything is fixed down ready for off-site manufacture, delivery and construction on site — a true ‘package’ if ever there was one. 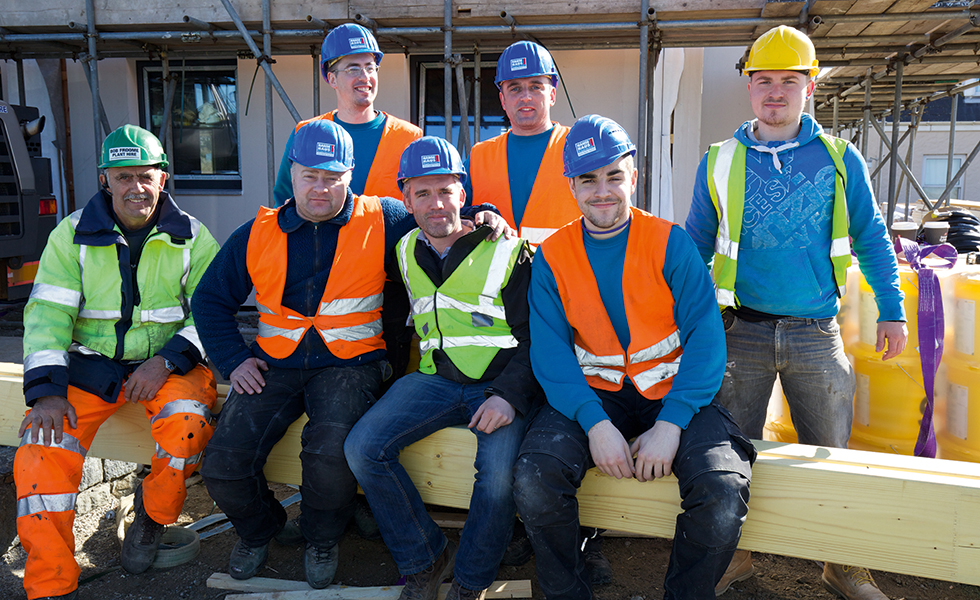 Elsewhere in this magazine we talk about the rise of ‘contextualism’ in house design — namely the idea that each new house should be a unique reaction to its specific environment. Which, traditionally, would have been bad news for the package companies selling strongly on a design style. Potton, for example, were known for many years for their distinct range of traditional homes (the Milchester rectory style, the cottage-inspired Caxton, the strong gables of the Gransden, and so on). 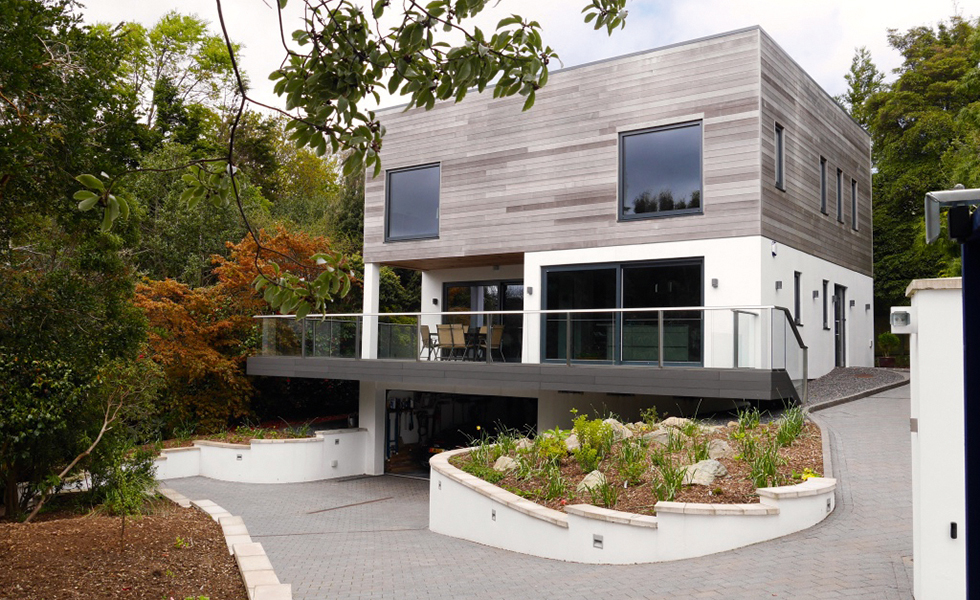 It’s worth noting as a slight adjunct here that of the 6,000 self built homes that Potton have built since the late 1980s, there have been some 2,200 unique designs produced — which rather puts paid to the theory that these package suppliers ever had a ‘stock’ house. But they were largely variations on a few common themes, and now Potton is turning much more towards bespoke, individual design to meet customer needs.

Steven Harding, spokesperson for German timber frame package supplier Baufritz, meanwhile says that it’s their individual, architect-led approach to design that helps them to achieve planning for homes in sensitive locations such as Conservation Areas. 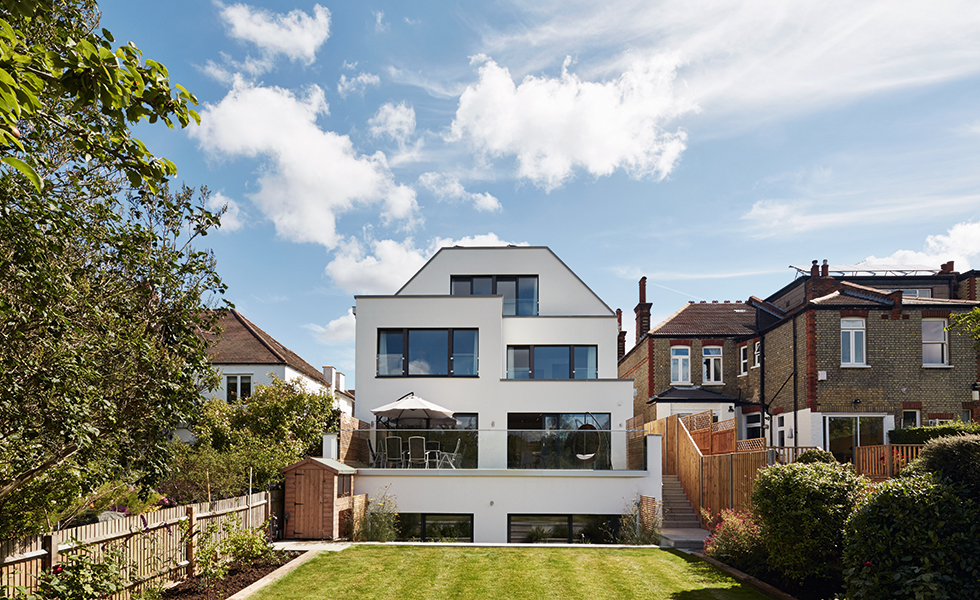 So how do you pick between package companies? The choice comes down to the quality of the designers and their willingness to provide the type of services that you might expect from an independent architect (in many cases they are independent designers anyway). So try to find out as much as possible and ask questions. Who will handle your design, for instance? Can you meet them? Can you see previous examples of their work?

Many package suppliers tend to bundle the costs of the design service into the overall package price. That’s good for you, in most respects, but be careful to ensure that it doesn’t falsely reduce the importance of design to the wider scheme. Most experts agree you should be spending between 7-12 per cent of your build costs on design to give it the time and consideration (and expertise) it needs.

Tip: Be wary of companies who put your design through a plans farm or who seem to employ just a few junior in-house staff to be tasked with the mission of creating your perfect home. 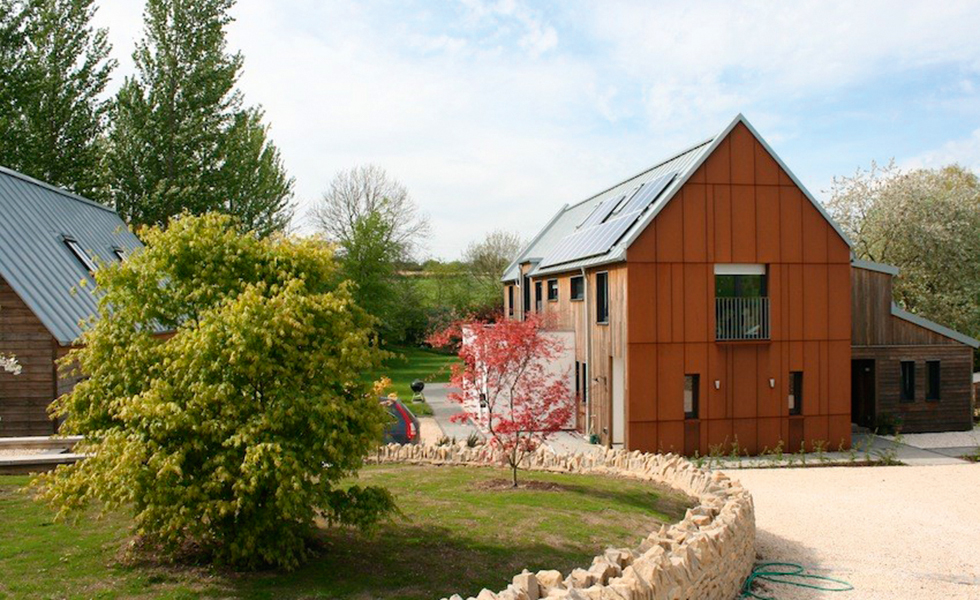 This contemporary barn-style home was built by Hanse Haus

Hanse Haus is one of best-known German-based companies offering a genuine continental-style turnkey approach in the UK. They build around 25 houses each year in the UK and they are unashamed in wanting their customers to use them as a full package supplier — from design through to handover. According to their spokesperson, Josh Stanbury: “We supply and build everything apart from the groundworks and the kitchen.”

Once the self builder has been through the design stage (handled by a UK-based house designer) and signed up, they fly out to Hanse Haus’s base in Germany and spend “a very intense” two or three days at the sample centre making all the decisions — from windows to internal doors to socket type and position. The price is then adjusted (Hanse have a standard specification with certain choices being premium) with any off-piste choices accounted for.

Josh says: “People can have whatever they want — the sample centre is very comprehensive and German fittings are of a higher basic standard than those in the UK, but if a self builder wants something they’ve seen in an Italian magazine, then we make it happen.”

Once signed and agreed (at which stage a portion of the total build price is deposited in a client account) the house is manufactured in Germany (usually over a two to four month period) during which time the groundworkers prepare things. “Then,” says Josh, “the team of four or five builders come over from Germany, with the pre-built panels (which include plumbing and are even fitted with the doors) and the house is built — it’s usually watertight in three days and ready to move in to in 12 weeks.”

26 of the best package companies to check out

See Galleries of All Our Package Homes