Steven Harris and Catherine Roberts’ new self build home in Wales is an exemplar for low-energy living. Packed with insulation and designed with passive solar gain in mind, it generates the little energy it needs through a woodburning stove with back boiler

Whether you’re building a new house or renovating an old one, you have the perfect opportunity to set up a new heating system for the next decade (ideally more). And, particularly if you’re off the mains gas network, you will want to consider alternatives to the fossil fuel options. Of course, oil (kerosene) is at a long-time low at the moment, but regardless, reducing your reliance on the whims of the energy companies and National Grid seems like a wise choice.

The problem is that renewable heating is not like conventional heating. Specifying a gas or oil-fired boiler is a well-trodden path: the trusted plumber turns up, takes a look at the house and, probably with no calculations at all, will know exactly which boiler to install.

He might suggest a boiler with 25kW capacity in the sure and certain knowledge that it will be enough. The boiler will be capable of producing anything from 5kW to 25kW (the modulation range), and the requirement will be something in that range. The peak space heating load for the average modern house will be around 10kW; add another 4kW or 5kW for domestic hot water and the 25kW machine is still ample. The mantra is to over-specify and be sure.

As an example of how this thinking pervades the industry, the Worcester Bosch Greenstar range of condensing boilers start at 12kW and go up to 30kW. The price difference between these machines is trivial (relatively) and the efficiency is broadly the same whatever the output.

The story is quite different when specifying renewable technology. Although a few heat pumps offer a degree of modulation, generally a 10kW heat pump will output 10kW. An oversized heat pump will be significantly less efficient than one that is the right size. To some extent the same issue applies to all renewable energy heating systems — an oversized solar thermal system will do well in winter but will need to dump heat in summer. It is therefore critical to calculate exactly how much heat the house needs before selecting the heat source.

What is the Best Way to Proceed?

Simply, with the help of an accomplished heating engineer. There are two ways to approach renewables:

The latter option is probably the best. The reason for this is that not all technologies are best suited to every house, and the engineer will design and specify the whole system (and install it, service it, and come out to help you in a cold-shower crisis).

Renewables undoubtedly reduce reliance on fossil fuels and provide greater (although far from total) price stability. Plus, thanks to the Renewable Heat Incentive, after about seven years you’ll have, in essence, a heating system paid for by the Government with lower running costs, too. The main negative is the high capital cost compared to the standard alternatives and the undoubted specialist nature of the kit. It is usually well beyond your friendly local plumber. What’s more, the existence of the Renewable Heat Incentive has been called into question meaning the seven year payback might not always be the case.

Approximate prices for a 20,000kWh per annum use:

Launched in April 2014, the Renewable Heat Incentive (RHI) provides payments to anyone installing (or who has installed, since July 2009) certain approved renewable heat-generating technologies. It is particularly suited to the 1 in 10 of the population who currently live in an area off mains gas, but the scheme is open to anyone looking to replace their boiler. In its simplest sense, the RHI is a Government-financed boiler replacement scheme.

The overall aim of the scheme, according to Steve Roberts from the RHI team at the Department of Energy & Climate Change (DECC), is to: “Broadly pay back the cost of installing renewable heat technologies over seven years.”

The technologies that are included in the scheme are biomass boilers, ground- and air-source heat pumps, and solar thermal.

Each homeowner applying for the scheme will need to carry out a Green Deal assessment and receive an Energy Performance Certificate (EPC). This is expected to cost a total of £150 and will provide an estimated annual heat demand figure based on the energy efficiency of the house.

For heat pumps and biomass, payment is based on deemed heat usage, rather than metered, unless the property is a second home or the homeowner retains an existing non-renewable heat source (e.g. oil boiler) as a secondary source. Payments for solar thermal panels are based on an estimate of system performance, measured as part of the EPC.

According to the latest reports, over 40,000 homeowners have qualified for payments, the majority of which are for ‘legacy’ schemes installed before 2014. By some distance, biomass is proving the most popular technology.

There has been widespread speculation as to the future of the scheme. Latest reports suggest that the scheme will definitely continue until at least April 2016, if not 2017. What is certain is that the quarterly degression in tariff rates will continue to reduce the incentive — so act early for maximum gain. For the latest rates visit the Ofgem website: ofgem.gov.uk.

Find out about the degression and possible end of the scheme here. 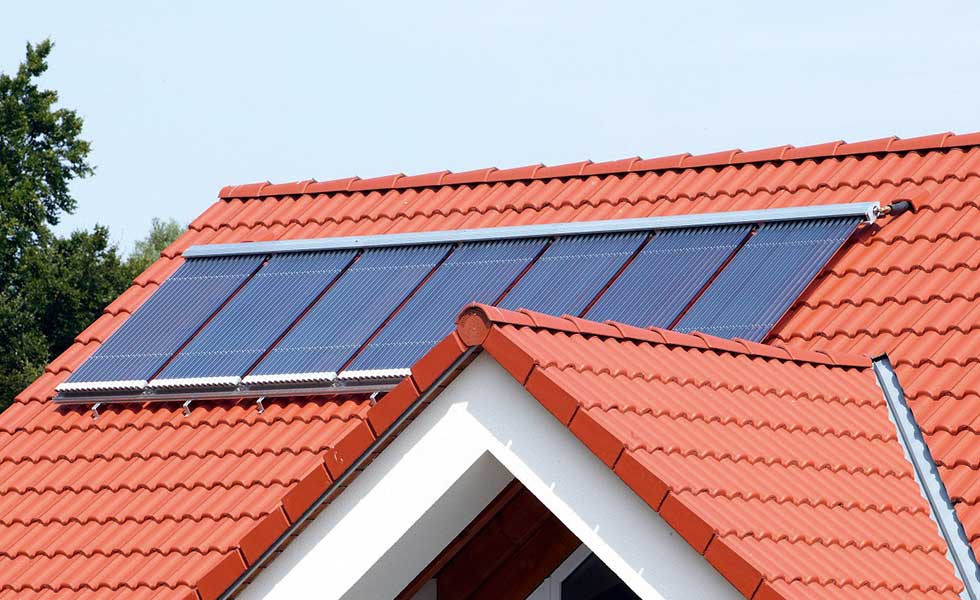 What do they do?

Panels on your roof use heat from the sun to heat up water for use in the home. According to independent tests, panels can supply typically 50-60% of your home’s annual hot water requirement (i.e. most of it in summer, hardly any in winter).

How does it work?

The water running through the panels – known as collectors – on your roof heats up thanks to absorbing heat from the sun. The hot water is pumped through a coil in your hot water cylinder and this heats up your cylinder’s water. You will need a hot water cylinder with two coils and, ideally, a cylinder large enough to enjoy the full benefits of the heat generated by your panels.

On a like-for-like basis the cost per kWh produced is similar whether you use flat plate or evacuated tubes. As with all good things the technology moves on and there are now flat plate systems that look quite good (they do not need to be south facing either).

What Will it Produce?

A typical domestic solar hot water system – be it a 4m² flat plate or 24 evacuated tubes – will deliver up to 2,000kWh over the course of a year. Typically, hot water accounts for around 25% of a home’s total non-electricity energy use (i.e. a typical gas bill is split 75:25, space heating to hot water).