A phase change material (PCM) is a substance that changes its state – solid to liquid or liquid to solid – with a change in temperature. Without going into the physics, that means it is capable of storing heat energy. As the diagram below shows, the PCM is in a solid state until heat is applied. The material absorbs the heat and changes to a liquid state. The heat is stored (typically for hours or days) by the PCM in its liquid state until the ambient temperature falls. As the ambient temperature falls, the stored heat is released and the PCM reverts to its solid state.

PCMs are relatively new to the construction industry, although research started in the USA in the early 1940s, focused on developing affordable products that act at useful temperatures. There are now various types of PCM, mostly based on paraffin or a salt hydrate. All are capable of absorbing and emitting heat with a comparatively small temperature change, typically 18°C to 24°C. 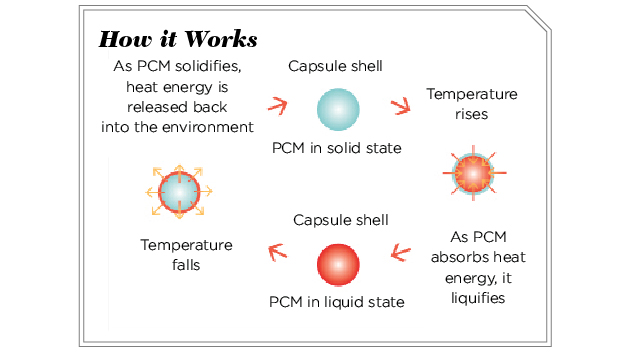 So Why Introduce Phase Change Materials?

The argument between the two principal construction systems – light-and-tight or mass-and-glass – is essentially that light-and-tight construction may give better insulation levels but to utilise passive solar energy (free heat from the sun) and be truly energy efficient you need thermal mass; masonry, concrete or similar to absorb solar heat and release it into the interiors after the sun has set and temperatures drop.

Phase change materials have the potential to substitute for that thermal mass in light-and-tight construction. So far the lack of recognised products, and high price, has led to phase change materials being confined to a few flagship projects. But that could soon change with a significant price drop and much larger numbers of new projects utilising the technology. A few notable projects include Edinburgh Napier University’s new campus, the iCon building in Daventry and the BRE’s stable-block-to-housing conversion.

There are two main manufacturers in the UK: DuPont with their Energain products and BASF with their Micronal PCM.

Energain panels consist of a compound containing a PCM of paraffin wax with transition temperatures of 18°C to 22°C. The panels are less than 6mm thick and can be installed on walls and ceilings under ordinary plasterboard. Panels are fixed with nails, staples or screws and Energain also provide an aluminium tape to cover fixings and seal joints.

BASF’s Micronal PCM is contained in tiny (two to 20 micron diameter) polymer capsules that can be incorporated into wall boards, ceiling tiles and even aerated concrete blocks.

Datum Phase Change also produce a range of products using Micronal PCM in its RACUS ceiling systems and Fabric Energy Storage (FES) wall board systems. These have all the benefits of PCM-based products but use natural, formaldehyde-free materials. (Visit datumphasechange.com for more information on such products.)

Their FES boards are 25mm thick and also fixed with nails or screws in the same way as plasterboards. They have tongue-and-grooved edges so they give an airtight joint and do not need taping.

Cost is a factor and these systems are not cheap. The Datum Phase Change FES board varies in price from £25/m2 to £75/m2, depending on the proportion of PCM in the board. PCM boards would not be needed in bedrooms, which tend to need to be allowed to cool overnight. In living and dining rooms they would only be wanted on the top third of the wall – where the air is hottest – but maybe lower on walls directly facing the sun. The same boards can be used on ceilings – although there are separate systems available – but these would not generally be used in rooms on the north side of the house.

£25 to £75/m2 sounds expensive compared to simple plasterboard but consider the potential they unlock – the solar powered house, thermal mass in light-weight construction – and the area they actually need to cover, and it may seem a more reasonable price.

How Good are Phase Change Materials?

Essentially, PCMs work in the same way as materials with thermal mass; they enable free solar energy to be captured and released to smooth out the peaks and troughs of the heating/cooling cycle. DuPont claims that their products can help reduce heat consumption by 15 per cent and air conditioning costs by 35 per cent. Datum Phase Change ceiling tiles have been tested in Ofcom’s London HQ and the results have been impressive. Apparently over a 45-day period the air conditioning ran 257 hours in rooms fitted with standard ceiling tiles, and for just 47.5 hours in rooms fitted with Datum Phase Change tiles.

PCMs undoubtedly work; all the academic studies done on the material back up that claim. By way of comparison, concrete has a heat storage capacity of 0.784kWh/m3 while a PCM will hold between 38 to 105kWh/m3.

PCM technology is not a substitute for good design and construction but it is a useful and effective tool for the self-builder wanting an energy-efficient house. Lightweight construction, high insulation and airtightness are all watchwords for sustainability, and it may be that PCMs are the final component, providing the thermal mass necessary for really efficient homes.

This chemical-based approach may not be the only answer. The unfired clay boards from Eco Building Boards, (ecobuildingboards.weebly.com) may be an alternative. They can be used for cladding of interior walls, timber stud frameworks and dry wall constructions in place of plasterboards. These 14mm boards can also be fixed with nails, screws or dot-and-dab and the joints are reinforced with glass fibre mesh and then flush-coated with a clay plaster.