Solar energy is a wonderful thing — except for the fact that it produces the most useful energy at the very time when you don’t really need it. In terms of solar thermal energy, broadly we get 50% of the annual production in the summer, 10% in winter and 20% both in spring and autumn. But what we want is almost the reverse of that. What we need is some way of storing all that summer heat for use in the winter. And research started in the early 1940s has provided two distinct ways of doing it: phase change materials (PCM) and ground or ‘geothermal’ storage.

So, what exactly is a phase change material?

Put simply, a ‘phase change’ material is one that absorbs and stores heat in one state, or ‘phase’ (typically as a liquid), and then releases that heat again when it changes state (typically to a solid). When the temperature rises above a PCM’s ‘transition temperature’ (the point at which the material changes phase), the PCM absorbs heat and melts, cooling a building’s environment. As the temperature decreases, the PCM releases that stored heat and returns to a solid state — providing a passive form of heating. The principles are similar to those of water — heat it up and it will ‘change phase’ to steam, cool it and it changes to ice. That is natural phase changing.

How can I use the technology in my project?

Wall and ceiling boards are the most accessible option to self-builders. They are either impregnated with PCM or have PCM laminated to them, but they work to the same principle. They absorb heat from the air in the room, or directly from sunlight, which is then released back into the room as the temperature falls.

One of a small number of products currently available in the UK is DuPont™ Energain®, available from SIG Sustainable Solutions (sigenergy.co.uk). This is a 1.2m² board containing a mix of a co-polymer and paraffin wax. Essentially the co-polymer binds the wax (to prevent it leaking out of the board when it melts) which absorbs excess heat in the room and releases that heat when the temperature in the room falls below 18°C. At £50/m² it is not cheap, but is highly effective in smoothing the heating peaks and troughs in a timber frame building, which has far less potential for thermal mass than a masonry structure.

Will the heat store long-term?

The heat storage characteristics of PCM used in an application like wall and ceiling boards are fairly short-term. The intention is to store heat over a small temperature range (maybe 7°C) for a short period. Larger temperature variations and longer term storage can, however, be provided by seasonal mass-storage devices. As the name suggests, these systems will store large quantities of heat from summer to winter, with little appreciable loss.

These systems are not widely available and are not cheap (contact Newform Energy on 0845 293 7554 for more details), but what they do is unlock the potential for the solar house, creating thermal mass in lightweight construction.

The argument between the two principal construction systems – light-and-tight (i.e. an airtight timber frame or SIPs structure) vs. mass-and-glass (i.e. masonry with lots of glazing) – has been going on for some time. Essentially the argument is that light-and tight construction may give better insulation levels, but to effectively utilise passive solar energy requires mass. It needs masonry or concrete to absorb solar heat and release it after the sun has set.

By way of comparison, concrete has a heat storage capacity of 0.784 kWh/m³ while a PCM will hold between 38-105 kWh/m³. PCM boards allow all the benefits of both construction methods, with none of their drawbacks. The boards and PCM additives (that can be added to concrete, SEE BELOW) were developed in the USA and are not widely available in the UK, possibly because we have been so reluctant to take up timber frame house construction. 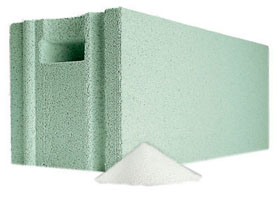 ABOVE: PCM additives can be added to concrete, such as H+H Deutschland GmbH’s CelBloc Plus®, although the products are currently difficult to obtain in the UK.

Are there any alternatives?

The alternative for seasonal heat storage is ground, or geothermal, storage — a technology developed in Canada, Sweden and Germany. Essentially it amounts to a borehole (100-150m deep) and some solar panels. Water is heated in the summer months and that heat conveyed down the borehole, raising the temperature of (typically) the rock at the bottom of the borehole. The rock is raised to around 85°C and although the heat storage capacity of rock is not great, the cost of getting the heat there makes it a practical proposition, and it is usually more economical than PCM.

Typically more than one borehole is needed and the technology is best suited to developments larger than a single house, allowing the cost to be spread. Water can be incorporated with a large tank sunk into the ground and surrounded by boreholes. The effect of this is two-fold: the water tank is a good, short-term buffer as the temperature can be raised and lowered quickly; and any heat escaping from the water tank is ‘captured’ by the boreholes, so the arrangement is relatively efficient as well.

Self-builder Richard Hawkes incorporated DuPont™ Energain® into his unusual arched zero-carbon home in the Kent countryside. The lightweight thermal mass panel system works by absorbing ambient heat as room temperature rises (at around 22°C), storing it until the temperature drops again (at around 18°C) and then releasing it back into the room, making for potentially significant energy savings. 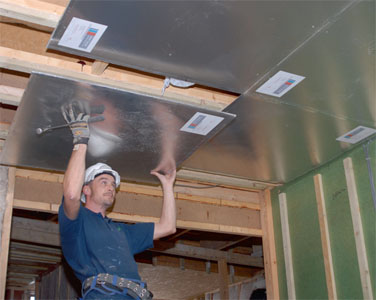 Richard says: “The house is heated by passive solar and heat-recovery ventilation. The clay tile arch and ground slab are exposed as thermal mass to most rooms in the building. However, two south-facing first floor rooms do not have exposed conventional masonry thermal mass within them to help regulate internal temperature. DuPont™ Energain® is the perfect product to provide thermal mass where it wouldn’t otherwise have existed.

“The installation was very quick and, because the sheets are smaller than plasterboard, it could be done by one person on their own.” For more information, log on to dupont.co.uk.

“Why I’ve Chosen Phase Change for My Build Project”

Readers of H&R may have seen my Six Sided Pyramid Glass Pavilion that can be fitted with an automated flood defence elevation system (BELOW). When developing the model it was absolutely crucial that I had adequate storage of the excess daylight solar gain. Because of the three relatively simple foundation supports, the last thing I wanted was the weight of concrete or similar mass of building material. The building is designed to rise effortlessly above flood water so the concept of a thick, heavy floor slab weighing tens of tonnes was quite incongruous. 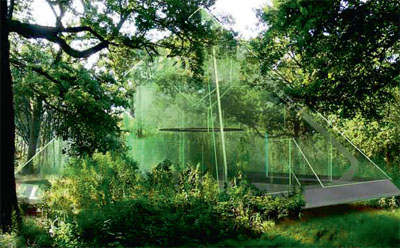 Then I was reminded of an underfloor heating system I’d seen that had pulverized clay pellets impregnated with what I was to discover was a paraffin wax phase change material. It was offered as an infill between the pipework in lieu of traditional wet screeds. A few exasperating telephone calls to the UK agents drew a complete blank but finally I managed to find the German manufacturer of the granules. This turned out to be an ideal material for my needs. It is free flowing, can be readily poured into any shape or size of void and is available in a variety of temperature ranges at which the phase change takes place.

My iris-shaped vacuum-formed internal curved walls are hollow by design and are a ready storage compartment for the granules. I had thought of using DuPont™ Energain® but this does not lend itself readily to my silky smooth curved walls. Although for those readers who simply wish to add a phase change material to the average south-facing room with adequate glazing, it is a tried and tested product with relatively easy fixing requirements and can easily be over-laid with plasterboard, Fermacell or similar building board.

Both seasonal PCM and geothermal systems store energy in the form of heat, so can be used to raise or lower temperatures. If needed the technology can store winter cold to provide summer coolness, just as well as summer heat for winter warmth.

In the UK, the technology has hardly raised its head above the parapet. Germany and Canada are well in front and the technology is quite well regarded, if still experimental. But there is a happy inevitability about it. The sun is the ultimate source of renewable energy but all solar technology is plagued by the same problem — the sun always sets. A sensible storage system would be a natural, essential and welcome development.