The Building Regulations state that you can run cables both horizontally and vertically in walls. Cables can run under floors, through joists, above ceilings, in lofts and down walls to switches, sockets and cookers. If you have to run cables through joists, they need to be at least 50mm below the floor.

In homes, cables should be 1mm2 or 1.5mm2 twin and earth for lighting on a 6-10A (amp) MCB (miniature circuit breaker), and 2.5mm2 twin and earth for power (sockets). Do note that a 2.5mm2 cable has a maximum rating of 24A (under normal conditions) and usually we want to put it on a 32A socket ring circuit. To overcome this issue, we have to make that socket circuit a complete ‘ring’ circuit. If you don’t use a ring circuit, then you must increase the cable size to a minimum of 4mm2 twin and earth and you can put this in as a radial circuit, which will overcome the 32A MCB issue.

These are used in lighting circuits, cooker circuits, immersion, electric underfloor heating and many other places. Basically it’s a circuit with one cable from the fuseboard. The diagram (below) shows a typical radial circuit used for sockets. It’s all within Building Regulations. 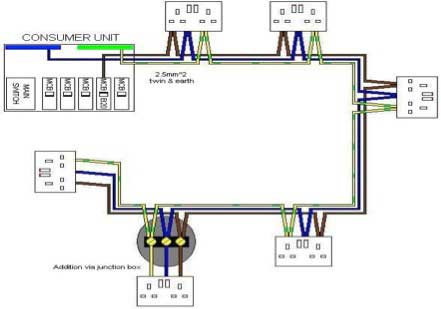 Can I save money on electrics by running my own cables?

To stay compliant with the regulations, I’d work closely with an electrician. You can do all the labour and intensive work yourself, such as running cables, as it would be cost-effective, but you should let the electrician connect equipment or at least supervise you connecting equipment. You must let him or her test and certify. This would probably save you time and money. 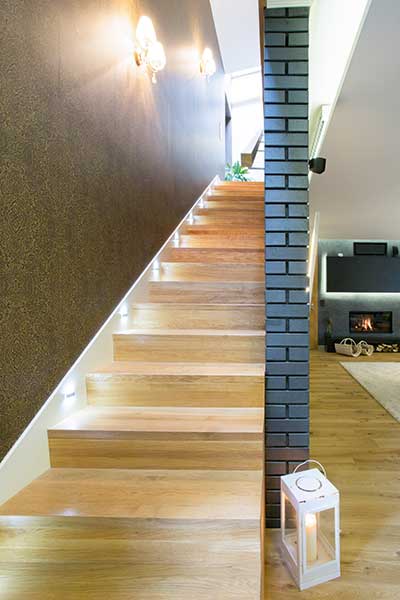 Staircases are a good example of the need for good design, with controls needed at the top and bottom — often now on different circuits

When planning lighting in different rooms you will need to know the options for switches. Switches are sold in ‘gangs’ (which refers to how many circuits they control, so a two-gang switch will have two controls). There may also be option for control dimmers (or not), plus you’ll need to know the number of other switches which will control the same circuit (e.g. one way, two way, etc.).

One-way switches are usually the cheapest on the market but for the sake of a few pennies, it’s best to use two-way switches — as they can always be used as one-way switches. Staircase lighting is a good example. You will want to be able to turn on/off upstairs lights while you’re downstairs or upstairs, and vice versa. 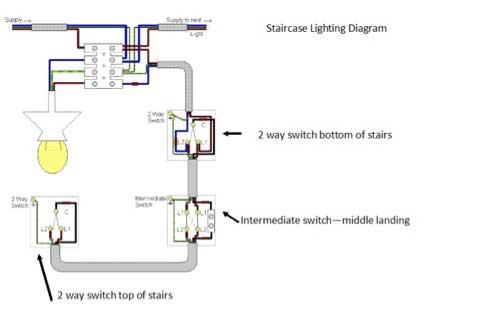 You may also have two flights of stairs and you may want to turn the same lights on and off from two, three or four different switch positions depending on how many landings you have and the size of the landing(s). To do this we use two-way switches and intermediate switches — the diagram of how it might look is shown above. Obviously there are variations, but this a typical switch layout.

If you need to have more than three switches shown, then you would use another intermediate switch as the two-way switches are always positioned at both ends (i.e. the ground floor and top landing). If you only need two switches, then forget the intermediate switch.