Changing a socket and adding a new one to a circuit are two of the few electrical tasks a DIYer can legally do, so take a look at its key components with this detailed diagram of the inner working of the humble electrical socket.

1. Terminal screws: These secure LIVE, EARTH and NEUTRAL within their TERMINALS. No bare wire should be exposed; if it is, cut it or fold over the end.

2. Earth: A safety wire which carries the same electricity as LIVE if something goes wrong, taking it to the ground. Earth is bare inside the CABLE and, when fixing, a green and yellow sheath is slipped over the end. Note how a bridge connects it to the FACE PLATE screws, for safety. 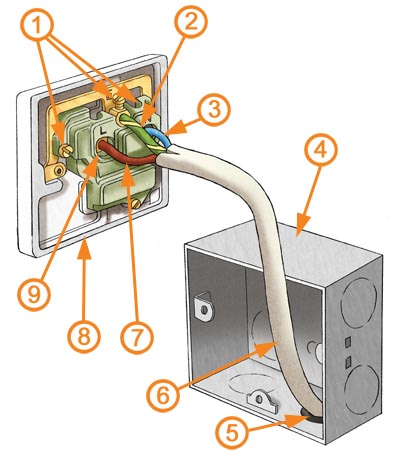 NB: This is a one-gang 13amp switched socket. The most common type of domestic circuit in the UK is a ring circuit. A DIYer can add a new socket, usually by taking a spur from an existing point (one spur per socket). Take advice before doing so, and always turn off the mains first.

3. Neutral: After feeding the socket via LIVE, electricity passes along neutral to return to the house’s consumer unit, completing the circuit. Neutral is sheathed in blue, but prior to 2004 was black (see LIVE).

4. Mounting Box, a.k.a. Back Box: Protects the TERMINALS and CABLE, which enters through a hole, usually at the bottom. This flush box is of galvanised steel, and can be fitted within hard plaster and plaster – board, but surface-mounted boxes tend to be plastic. They are available in various depths, so if changing a FACE PLATE, measure it so you buy a box deep enough.

5. Soft Grommet: Available open or ‘blind’ (has no hole, so you can cut one to size) and usually of PVCu or rubber, this protects the CABLE from the MOUNTING BOX. The CABLE should only just be able to fit through the hole, to prevent the spread of fire.

6. Cable: A PVCu sheath encases the LIVE, EARTH and NEUTRAL wires. This is a 2.5mm2 ‘three-core circular sheathed cable’. In old circuits, sheaths may be rubber. This wiring must be updated by an electrician.

7. Live: Electricity flows along this wire from the consumer unit to the socket, as and when needed. This conductor is ‘switched’, so you can stop the flow of electricity. The live wire is currently brown in colour, although prior to regulations changes in 2004 (to aid the colour-blind) it was red, so if you are changing a FACE PLATE or adding a new socket in an older house, this is what you will find.

8. Face Plate: Available in a range of materials and designs, the socket’s facia houses the TERMINALS and is screwed to the MOUNTING BOX. The LIVE and NEUTRAL connectors are 22mm apart with shutters to prevent the insertion of anything other than a plug.

9. Terminal: These connect the LIVE, EARTH and NEUTRAL wires to conductors in the FACE PLATE, which ultimately transfers the electricity to a plug. They are secured in place by tightening the TERMINAL SCREWS with a flat-head screwdriver.

Find out more about the basics of electrics