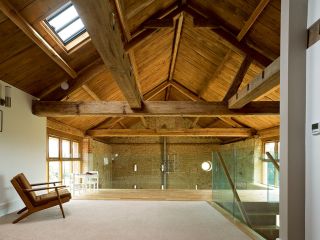 Changes to Permitted Development (PD) Rights introduced in early April 2014 have transformed the landscape for anyone wishing to undertake a barn conversion in England (not applicable to the rest of the United Kingdom as it currently stands).

Further amendments took effect on 6 April 2018, including the allowance of up to five new homes to be created from existing agricultural buildings rather than the previous maximum of three.

For more expert advice and inspiration for your project, get two free tickets to the Homebuilding & Renovating Show

As a result of the amendment, it will now be possible to convert existing agricultural buildings – barns for example – into homes without needing to expressly apply for planning permission, as had previously been the case.

Permitted Development Rights allow homeowners to carry out building work to their homes without needing to apply for planning permission from their local authority and have traditionally been used to enable minor extensions, loft conversions and the creation of outbuildings to be carried out without the need for notification.

What are the Details?

The Barn Conversion clause comes about as part of a new Class – MB – into Part 3 of the Second Schedule of the General Permitted Development Order. This new class authorises change of use of a building and any land within its curtilage from use as an agricultural building to a use falling within Class C3 – dwellings. It also authorises building operations ‘reasonably’ necessary to convert the building to residential use.

*effective from 6 April 2018. Find out more about these changes to PD rules for agricultural buildings.

How Much Can You Rebuild?

Class MB permits reasonable building operations to convert a barn into a house, but only within the envelope of the existing structure. It permits partial demolition and rebuilding of the barn, but the extent of this allowance will probably be decided by case law.

Most experts believe it unlikely that flimsy Dutch barns or glasshouses could be simply knocked down and replaced with a new house (even if it were to mimic the appearance of the existing) although this is something that will be established as homeowners and local authorities dispute the detail.

However, significant improvement to the existing fabric, including new windows, even new walls as required, will be permitted under MB.

Are There Any Exclusions?

What do I Need to do Before I Convert my Barn?

As is increasingly the case with the more controversial elements of Permitted Development, Class MB is subject to what’s known as a Prior Notification procedure.

What is Prior Notification?

Prior notification came into force in 2013. Under this planning change, single-storey, rear residential extensions can be built up to 8m in depth (6m for a semi or terrace), provided that boundary neighbours are first informed or given ‘prior notification’.

As long as there are no objections, or any objections received have no planning merit, then a Certificate of Lawful Development is issued.

The 2013 changes also allowed for the change of use of buildings from office use (B1) to residential (C3).

Prior Notification Extended to Agricultural Buildings

An agricultural conversion can result in the creation of no more than five residential units, using up to a maximum of 465m3 of internal floorspace.*

Before starting, the converter must apply to the local authority to establish whether they will need to receive prior approval (!) for:

As you can see, this does give the local authority power to veto the development (although their decision must comply with the policies in the National Planning Policy Framework). In many ways, this makes the Prior Notification process within Permitted Development a planning application by another name.

It is still too early to gauge the impact of the Prior Notification clause; however, as barns are often in isolated rural areas, one can imagine the issues of sustainability being raised as a potential objection by local authorities.

Likewise, Prior Notification is also required for the local authority to decide whether they need to have prior approval on the design and external appearance of the building. Again, any decision must be met within the context of the NPPF, but it’s not too difficult to conclude that this is just another form of planning application. Under the Prior Notification procedure, the local authority does have the right to impose conditions on the development.

Do You Have the Right Insurance?

To enter a project without sufficient insurance can be a recipe for disaster and risk your entire investment.

Get a quote now to protect your project